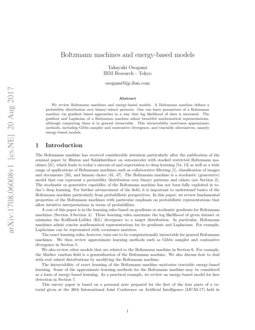 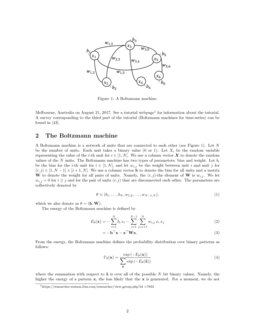 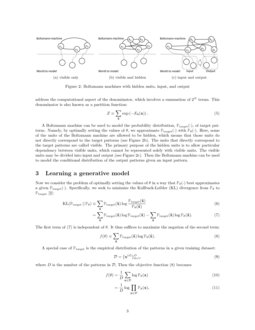 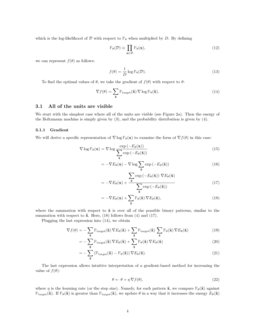 , which leads to today’s success of and expectation to deep learning

A core of this paper is in the learning rules based on gradients or stochastic gradients for Boltzmann machines (Section 3-Section 4). These learning rules maximize the log likelihood of given dataset or minimize the Kullback-Leibler (KL) divergence to a target distribution. In particular, Boltzmann machines admit concise mathematical representations for its gradients and Hessians. For example, Hessians can be represented with covariance matrices.

The exact learning rules, however, turn out to be computationally intractable for general Boltzmann machines. We then review approximate learning methods such as Gibbs sampler and contrastive divergence in Section 5.

This survey paper is based on a personal note prepared for the first of the four parts of a tutorial given at the 26th International Joint Conference on Artificial Intelligence (IJCAI-17) held in Melbourne, Australia on August 21, 2017. See a tutorial webpage

111https://researcher.watson.ibm.com/researcher/view_group.php?id =7834 for information about the tutorial. A survey corresponding to the third part of the tutorial (Boltzmann machines for time-series) can be found in [43].

A Boltzmann machine is a network of units that are connected to each other (see Figure 1). Let N be the number of units. Each unit takes a binary value (0 or 1). Let Xi

be the random variable representing the value of the

. We use a column vector

X to denote the random values of the N units. The Boltzmann machine has two types of parameters: bias and weight. Let bi be the bias for the i-th unit for i∈[1,N], and let wi,j be the weight between unit i and unit j for (i,j)∈[1,N−1]×[i+1,N]. We use a column vector b to denote the bias for all units and a matrix W to denote the weight for all pairs of units. Namely, the (i,j)-the element of W is wi,j. We let wi,j=0 for i≥j and for the pair of units (i,j) that are disconnected each other. The parameters are collectively denoted by

The energy of the Boltzmann machine is defined by

From the energy, the Boltzmann machine defines the probability distribution over binary patterns as follows:

where the summation with respect to ~x is over all of the possible N bit binary values. Namely, the higher the energy of a pattern x, the less likely that the x

is generated. For a moment, we do not address the computational aspect of the denominator, which involves a summation of

2N terms. This denominator is also known as a partition function:

A Boltzmann machine can be used to model the probability distribution, Ptarget(⋅), of target patterns. Namely, by optimally setting the values of θ, we approximate Ptarget(⋅) with Pθ(⋅). Here, some of the units of the Boltzmann machine are allowed to be hidden, which means that those units do not directly correspond to the target patterns (see Figure 2). The units that directly correspond to the target patterns are called visible. The primary purpose of the hidden units is to allow particular dependency between visible units, which cannot be represented solely with visible units. The visible units may be divided into input and output (see Figure 2). Then the Boltzmann machine can be used to model the conditional distribution of the output patterns given an input pattern.

Now we consider the problem of optimally setting the values of θ in a way that Pθ(⋅) best approximates a given Ptarget(⋅). Specifically, we seek to minimize the Kullback-Leibler (KL) divergence from Pθ to Ptarget [2]:

The first term of (7) is independent of θ. It thus suffices to maximize the negation of the second term:

A special case of Ptarget is the empirical distribution of the patterns in a given training dataset:

where D is the number of the patterns in D, Then the objective function (8) becomes

which is the log-likelihood of D with respect to Pθ when multiplied by D. By defining

we can represent f(θ) as follows:

To find the optimal values of θ, we take the gradient of f(θ) with respect to θ:

3.1 All of the units are visible

We start with the simplest case where all of the units are visible (see Figure 2). Then the energy of the Boltzmann machine is simply given by (3), and the probability distribution is given by (4).

We will derive a specific representation of ∇logPθ(x) to examine the form of ∇f(θ) in this case:

Plugging the last expression into (14), we obtain

The last expression allows intuitive interpretation of a gradient-based method for increasing the value of f(θ):

Now we take into account the specific form of the energy given by (3). Taking the derivative with respect to each parameter, we obtain

where Xi is the random variable denoting the value of the i-th unit for each i∈[1,N]. Notice that the expected value of Xi is the same as the probability of Xi=1, because Xi is binary. In general, exact evaluation of Eθ[Xi] or Eθ[XiXj] is computationally intractable, but we will not be concerned with this computational aspect until Section 5.

A gradient ascent method is thus to iteratively update the parameters as follows:

for i∈[1,N] and (i,j)∈[1,N−1]×[i+1,N]. Intuitively, bi controls how likely that the i-th unit takes the value 1, and wi,j controls how likely that the i-th unit and the j-th unit simultaneously take the value 1. For example, when Eθ[XiXj] is smaller than Etarget[XiXj], we increase wi,j to increase Eθ[XiXj]. This form of learning rule appears frequently in the context of Boltzmann machines. Namely, we compare our prediction Eθ[⋅] against the target Etarget[⋅] and update θ in a way that Eθ[⋅] gets closer to Etarget[⋅].

When the target distribution is the empirical distribution given by the training data D, we only need to take a sample X(ω) from D uniformly at random.

The stochastic gradient method based on (31)-(32) allows intuitive interpretation. At each step, we sample a pattern according to the target distribution (or from the training data) and update θ in a way that the energy of the sampled pattern is reduced. At the same time, the energy of every pattern is increased, where the amount of the increase is proportional to the probability for the Boltzmann machine with the latest parameter θ to generate that pattern (see Figure 3).

which suggests a stochastic gradient method of iteratively sampling a pattern X(ω) according to the target probability distribution and updating the parameters as follows:

The learning rule of (36

When an axon of cell A is near enough to excite a cell B and repeatedly or persistently takes part in firing it, some growth process or metabolic change takes place in one or both cells such that A’s efficiency, as one of the cells firing B, is increased.

A unit of a Boltzmann machine corresponds to a neuron, and Xi=1 means that the i-th neuron fires. When two neurons, i and j, fire (Xi(ω)Xj(ω)=1), the wiring weight wi,j between the two neurons gets stronger according to (36). Here, notice that we have 0<Eθ[XiXj]<1 as long as the values of θ are finite.

What is important is that this additional term is formally derived instead of being introduced in an ad hoc manner. Specifically, the learning rule is derived from a stochastic model (i.e., a Boltzmann machine) and an objective function (i.e., minimizing the KL divergence to the target distribution or maximizing the log-likelihood of training data) by taking the gradient with respect to the parameters.

We now derive the Hessian of f(θ) to examine its landscape. Starting from the expression in (27), we obtain

where COVθ[A,B] denotes the covariance between random variables A and B with respect to Pθ. Likewise, we have

Therefore, the Hessian of f(θ) is a covariance matrix:

where we use COVθ to denote a covariance matrix with respect to Pθ. When θ is finite, this covariance matrix is positive semidefinite, and f(θ) is concave. This justifies (stochastic) gradient based approaches to optimizing θ. This concavity has been known [19], but I am not aware of the literature that explicitly represent the Hessian with a covariance matrix.

where the energy is

The gradient and the Hessian of f(θ) is given by

where S denotes the vector of the random variables representing the value of a unit or the product of the values of a pair of units:

3.2 Some of the units are hidden

We first study the necessity of hidden units [2]. The Boltzmann machine with N units have

parameters to characterize this general distribution.

where the summation is over all of the possible binary patterns of the hidden values, and

Here, we write energy as follows:

We can then represent Pθ(x) in a way similar to the case where all of the units are visible, replacing energy with free energy:

In (20), we simply replace energy with free energy to obtain the gradient of our objective function when some of the units are hidden:

What we then need is the gradient of free energy:

where Pθ(h|x) is the conditional probability that the hidden values are h given that the visible values are x:

Observe in (66) that the gradient of free energy is expected gradient of energy, where the expectation is with respect to the conditional distribution of hidden values given the visible values.

The first term in the last expression (except the minus sign) is the expected value of the gradient of energy, where the expectation is with respect to the distribution defined with Ptarget and Pθ. Specifically, the visible values follow Ptarget, and given the visible values, x, the hidden values follow Pθ(⋅|x). We will write this expectation with Etarget[Eθ[⋅|X]]. The second term is expectation with respect to Pθ, which we denote with Eθ[⋅]. Because the energy (56) has the form equivalent to (47), ∇f(θ) can then be represented analogously to (49):

The expression with (72) suggests stochastic gradient analogous to (31)-(32). Observe that ∇f(θ) can be represented as

By taking into account the specific form of the energy, we find the following specific update rule:

We now derive the Hessian of f(θ) when some of the units are hidden. From the gradient of f(θ) in (72), we can write the partial derivatives as follows:

Notice that the second term in the right-hand side of (86) has the form equivalent to (38). Hence, we have