We look at Bohemian matrices, specifically those with entries from {-1, 0, +1}. More, we specialize the matrices to be upper Hessenberg, with subdiagonal entries ±1. Many properties remain after these specializations, some of which surprised us. We find two recursive formulae for the characteristic polynomials of upper Hessenberg matrices. Focusing on only those matrices whose characteristic polynomials have maximal height allows us to explicitly identify these polynomials and give a lower bound on their height. This bound is exponential in the order of the matrix. We count stable matrices, normal matrices, and neutral matrices, and tabulate the results of our experiments. We prove a theorem about the only possible kinds of normal matrices amongst a specific family of Bohemian upper Hessenberg matrices. 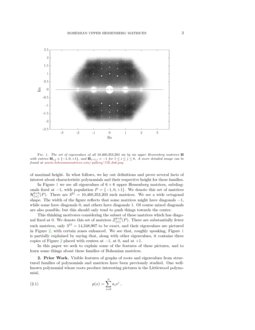 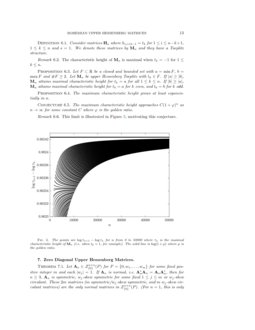 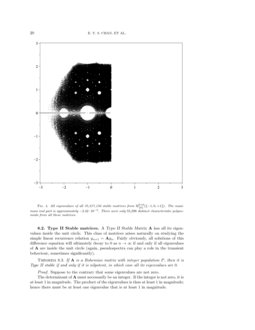 A Bohemian matrix family is a set of matrices all of whose entries are d...
Robert M. Corless, et al. ∙

A matrix is called Bohemian if its entries are sampled from a finite set...
Jonathan P. Keating, et al. ∙

A variant of Schur's product theorem and its applications

The concept of paraunitary (PU) matrices arose in the early 1990s in the...
Shibsankar Das, et al. ∙

A matrix family is called Bohemian if its entries come from a fixed finite discrete (and hence bounded) set, usually integers. The name is a mnemonic for Bounded Height Matrix of Integers. Such populations arise in many applications (e.g. compressed sensing) and the properties of matrices selected “at random” from such families are of practical and mathematical interest. For example, Tao and Vu have shown that random matrices (more specifically real symmetric random matrices in which the upper-triangular entries ξi,j, i<j and diagonal entries ξi,i are independent) have simple spectrum [23]. An overview of some of our original interest in Bohemian matrices can be found in [16].

Bohemian families have been studied for a long time, although not under that name. For instance, Olga Taussky-Todd’s paper “Matrices of Rational Integers” [24] begins by saying

“This subject is very vast and very old. It includes all of the arithmetic theory of quadratic forms, as well as many of other classical subjects, such as latin squares and matrices with elements +1 or −1 which enter into Euler’s, Sylvester’s or Hadamard’s famous conjectures.”

by C. W. Gear is another instance. What is new here is the idea that these families are themselves interesting objects of study, and susceptible to brute-force computational experiments as well as to asymptotic analysis. These experiments have generated many conjectures, some of which we resolve in this paper. Others remain unsolved, and are listed on the Characteristic Polynomial Database

[25]. Many of the conjectures have a number-theoretic or combinatorial flavour.

Typical computational puzzles arise on asking simple-looking questions such as “how many 6×6 matrices with the population111The population of a Bohemian family is the set of permissible entries. {−1,0,+1}

are singular.” The answer is not known as we write this, although we can give a probabilistic estimate (

Yet such matrix families are both useful and interesting. For instance, one may use discrete optimization over a family to look for improved growth factor bounds [20]. Matrices with the population {−1,0,+1} have minimal height333height(A):=||vec(A)||∞ is the largest absolute value of any entry in A. over all integer matrices; finding a matrix in this family which has a given polynomial p(λ)∈Z[λ] as characteristic polynomial identifies a so-called “minimal height companion matrix”, which may confer numerical benefits.

Recently the study of eigenvalues of structured Bohemian matrices (e.g. tridiagonal, complex symmetric) has been undertaken and several puzzling features are seen resulting from extensive experimental computations. For instance, some of the images at

In Figure 1 we see all eigenvalues of 6×6 upper Hessenberg matrices, subdiagonals fixed at −1, with population P={−1,0,+1}. We denote this set of matrices H6×6{π}(P). There are 321=10,460,353,203 such matrices. We see a wide octagonal shape. The width of the figure reflects that some matrices might have diagonals −1, while some have diagonals 0, and others have diagonals 1. Of course mixed diagonals are also possible, but this should only tend to push things towards the centre.

This thinking motivates considering the subset of these matrices which has diagonal fixed at 0. We denote this set of matrices Z6×6{π}(P). There are substantially fewer such matrices, only 315=14,348,907 to be exact, and their eigenvalues are pictured in Figure 2, with certain zones enhanced. We see that, roughly speaking, Figure 1 is partially explained by saying that, along with other eigenvalues, it contains three copies of Figure 2 placed with centres at −1, at 0, and at +1.

In this paper we seek to explain some of the features of these pictures, and to learn some things about these families of Bohemian matrices.

Visible features of graphs of roots and eigenvalues from structured families of polynomials and matrices have been previously studied. One well-known polynomial whose roots produce interesting pictures is the Littlewood polynomial,

where ai={−1,+1}. These polynomials have been studied in [1], [4], [5], and [6]. The image of their roots raises many questions, ranging from whether the set is (ultimately, as n→∞) a fractal and what the boundary of the set is, to questions about the holes in the image and its connection to various properties, such as degree and coefficients of the polynomial. Answers to some of these questions, particularly the ones involving the holes, have been shown to have some significance in number theory [2]. Roots of other polynomials have also been visualized; for more, see Christensen’s666https://jdc.math.uwo.ca/roots/ and Jörgenson’s777http://www.cecm.sfu.ca/~loki/Projects/Roots/ web pages.

“The Bohemian Eigenvalue Project” was first presented as a poster [15] at the East Coast Computer Algebra Day (ECCAD) 2015. The poster focused on preliminary results and many of the questions raised when visualizing the distributions of Bohemian eigenvalues over the complex plane. In particular, the poster focused on “eigenvalue exclusion zones” (i.e. distinct regions within the domain of the eigenvalues where no eigenvalues exist), computational methods for visualizing eigenvalues, and some results on eigenvalue conditioning over distributions of random matrices.

These new constructions led Chan and Corless to a new kind of companion matrix for polynomials of the form c(z)=za(z)b(z)+c0. A first step towards this was first proved using the Schur complement in [8]. Knuth then suggested that Chan and Corless look at the Euclid polynomials [9], based on the Euclid numbers. It was the success of this construction that led to the realization that this construction is general, and gives a genuinely new kind of companion matrix. Similar to the previous three families of matrices, the Euclid matrices are also upper Hessenberg and Bohemian, as the entries are comprised from the set {−1,0,+1}. In addition, an interesting property of these companion matrices is that their inverses are also Bohemian with the same population, a property which we call “the matrix family having rhapsody [10].”

As an extension of this generalization, Chan et al. [10] showed how to construct linearizations of matrix polynomials, particularly of the form za(z)d0+c0, a(z)b(z), a(z)+b(z) (when deg(b(z))<deg(a(z)), and za(z)d0b(z)+c0, using a similar construction.

In what follows, we present some results on upper Hessenberg Bohemian matrices of the form

with s=exp(iθk), usually s∈{−1,+1} (we do not allow zero subdiagonal entries, because that reduces the problem to smaller ones) and hi,j∈{−1,0,+1} for 1≤i≤j≤n. We denote the characteristic polynomial Qn(z)≡det(zI−Hn).

It will often be true that the average value of a population will be zero. In that case, matrices with trace zero will be common. It is a useful oversimplification to look in that case at matrices whose diagonal is exactly zero.

For a population P such that 0∈P, let Zn×n{θk}(P) be the subset of Hn×n{θk}(P) where the main diagonal entries are fixed at 0. □

Other questions than those answered in these tables can be asked of this data. For instance, one might be interested in the proportion of singular matrices. By asking which characteristic polynomials have zero constant coefficient, and counting the number of matrices that have that characteristic polynomial, one can answer such questions. In the case of six by six upper Hessenberg matrices with population {−1,+1}, there are 383,680 singular matrices, or about 18.3%

. Recall that for “random” six by six matrices, where the entries are chosen perhaps uniformly over some real interval, the probability of singularity is

zero because such matrices come from a set of measure zero. Yet in applications, the probability of singular matrices is often nonzero because of structure. By looking at Bohemian matrices, we get some idea of the influence of structure for finite dimensions n.

We can make sense of some of those experiments by theoretical results and proofs. We begin with a recurrence relation for the characteristic polynomial Qn(z)=det(zI−Hn) for Hn∈Hn×n{θk}(P) where s=exp(iθk). Later we will specialize the population P to contain only zero and numbers of unit magnitude, usually {−1,0,+1}.

We begin by proving the following equality:

Next we prove the theorem. Performing Laplace expansion on the last row of zI−Hn we get

we can express the coefficients recursively by equationparentequation

The first term can be written

and the second term

for 0≤k≤n−1 where fi,j,k are some functions of the entries of H. Let

The height of a polynomial is in fact a norm (the infinity norm of the vector of coefficients).

For any matrix A, −A has the same characteristic height as A. □

Since q0,0=1, and equations (27) and (29) are independent of s and hi,j, all qn,j must be positive and the maximum characteristic height is attained. ■

We use induction. The case n=1 is vacuously upper Hessenberg, though it is

For n>1, partition the matrix as

where s=eiθk for some θk. Then conjugate by

For clarity, consider the case n=2:

Proposition 3 gives matrices in Hn×n{0,π}({−1,0,+1}) with maximal characteristic height999We did not report the numbers of such matrices and polynomials that we found in our “results” section.. We noticed that they are Toeplitz matrices. This motivated our interest in upper Hessenberg Toeplitz matrices. We summarize some of the results of [11] here.

Consider matrices Hn where hi,i+k−1=tk for 1≤i≤n−k+1, 1≤k≤n and s=1. We denote these matrices by Mn and they have a Toeplitz structure. □

The characteristic height of Mn is maximal when tk=−1 for 1≤k≤n. □

The maximum characteristic height approaches C(1+φ)n as n→∞ for some constant C where φ is the golden ratio.

This limit is illustrated in Figure 3, motivating this conjecture. □

-skew symmetric for some fixed

1≤j≤m or wj-skew circulant. These 2m matrices (m symmetric/wj-skew symmetric, and m wj-skew circulant matrices) are the only normal matrices in Zn×n{0}(P). (For n=1, this is only [0]; for n=2, the symmetric and circulant cases coalesce, so that there are only m such matrices.) □

To prove this theorem, we establish a sequence of lemmas. First, we partition An. Put

Then the conditions of normality are

from the upper left corner. Since each nonzero element of P has magnitude 1, exactly one entry must be nonzero. ■

If An−1 is normal then T=τe and An is τ-skew symmetric. □

is normal. Because An−1 is normal, and

At this point, we see the outline of an induction:

being normal with An−1</