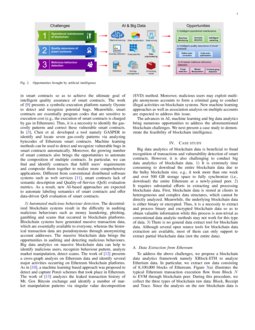 Blockchain has received extensive attention recently due to its provision of secure data sharing services with traceability, immutability and non-repudiation. Despite the merits of blockchain, the development of blockchain technologies has undergone a number of challenges including poor scalability, difficulties in operational maintenance, detecting vulnerable codes in smart contracts and identifying malicious behaviours in blockchain historical data.

The recent advances in artificial intelligence (AI) have greatly propelled the evolution of diverse business applications. The integration of AI with blockchain has the potentials to overcome the limitations of blockchain. We name the intelligent capability bestowed by AI to blockchain as blockchain intelligence. In particular, AI (such as machine learning) approaches may help to capture the abnormal behaviours in blockchain after analyzing the blockchain data, detecting and identifying possible vulnerable program codes in smart contracts.

As a disruptive software technology, blockchain is reshaping diverse business sectors. Blockchain is essentially a chain-like data structure storing transactions verified by majority of nodes throughout the whole network as shown inf Figure 1. Since the committed transactions in the blockchain have been stored at every node, they are extremely difficulty to be altered or falsified. Integrating with digital signature and asymmetric encryption, blockchain data is authenticated and auditable, implying non-repudiation of the transaction initiator. The length of blockchain keeps growing with the new validated transaction being appended at end of the chain. Data analytics on blockchain data can potentially extract valuable information.

Smart contracts have been implemented with the support of blockchain as shown in Figure 1. The approved contractual clauses are converted into executable computer programs. The logical connections between contractual clauses have also been preserved in the form of logical flows in programs (e.g., if-else-if statement). The execution of each contract statement is recorded as an immutable transaction stored in the blockchain. Meanwhile, smart contracts guarantee appropriate access control and contract enforcement. In particular, developers can assign access permission for each function in the contract.

Although blockchain and blockchain-enabled smart contracts are promising in reshaping various industrial sectors, the intrinsic limitations of blockchain systems also lead to the following challenges.

1) Operational maintenance. Due to the decentralization and heterogeneity of blockchain systems, it is difficult to identify the potential factors affecting the performance of blockchain. For example, the transaction throughput bottleneck of Hyperledger Fabric is different from that of Bitcoin and Ethereum since different consensus algorithms are adopted. Moreover, like other software systems, smart contracts consist of a number of computer programs, which may suffer from software bugs, malicious codes and incompatibility of running environments. Consequently, it is crucial to achieve the intelligent and robust operational maintenance of complex blockchain systems.

2) Quality assurance of smart contracts. Smart contracts suffer from a number of software vulnerabilities such as re-entrancy vulnerability [1], overcharging issue [3], randomness controlling [4] and Decentralized Autonomous Organization (DAO) attack [5]. In addition, contract correctness is also crucial to smart contracts since it is nearly impossible to make any revisions once they are deployed on top of blockchains. However, like software systems, smart contracts often contain programming bugs which may lead to crashes or misbehaviours while it is challenging to detect and identify these bugs due to the complexity of smart contracts.

3) Malicious behaviour detection. Besides legal businesses, blockchain may be exploited for malicious activities which are nevertheless difficult to be detected due to the pseudonymity of blockchain (i.e., anonymous blockchain addresses). On the other hand, the encrypted blockchain data also leads to the difficulty of detecting and identifying malicious behaviours via simply data analytics. Moreover, the massive volume and heterogeneity of blockchain data as well as diversity of user behaviours make the problem even worse. As a result, conventional classification-based methods (e.g., machine learning methods) cannot be directly applied.

Artificial intelligence (AI) as a broad discipline covering machine learning and cognitive computing is an ability of intelligent agents conducting intellectual tasks. The recent advances in big data, deep neural networks (DNNs) and general purpose computer hardware such as graphic processing units (GPUs) have greatly driven the development of AI. Consequently, we have witnessed the proliferation of diverse AI applications such as computer vision, natural language processing, speech recognition, sentimental analysis. Big data plays a critical role in propelling AI as well as AI applications. For example, deep learning (mainly based on DNNs) has achieved superior performance thanks to the availability of massive data so that DNNs can extract (or learn) enough features from large volume of data.

We summarize the opportunities brought by AI to enhance incumbent blockchain systems as follows (as shown in Figure 2).

3) Automated malicious behaviour detection. The decentralized blockchain systems result in the difficulty in auditing malicious behaviours such as money laundering, phishing, gambling and scams that occurred in blockchain platforms. Blockchain systems have generated massive transaction data, which are essentially available to everyone, whereas the historical transaction data are pseudonymous through anonymizing account addresses. The massive blockchain data brings the opportunities in auditing and detecting malicious behaviours. Big data analytics on massive blockchain data can help to identify malicious users, recognize behaviour pattern, analyze market manipulation, detect scams. The work of [12] presents a cross-graph analysis on Ethereum data and identify several major activities occurring on Ethereum blockchain platforms. As in [10], a machine learning based approach was proposed to detect and capture Ponzi schemes that took place in Ethereum. The work of [13]

The advances in AI, machine learning and big data analytics bring numerous opportunities to address the aforementioned blockchain challenges. We next present a case study to demonstrate the feasibility of blockchain intelligence.

To address the above challenges, we propose a blockchain data analytics framework namely XBlock-ETH to analyze Etherium data. In particular, we extract raw data consisting of 8,100,000 blocks of Ethereum. Figure 3(a) illustrates the typical Ethereum transaction execution flow from Block N to EVM through blockchain peer. During this procedure, we collect the three types of blockchain raw data: Block, Receipt and Trace. Since the analysis on the raw blockchain data is difficult, we process and categorize the obtained Etherium Blockchain data into six datasets: (1) Block and Transaction, (2) Internal Ether Transaction, (3) Contract Information, (4) Contract Calls, (5) ERC20 Token Transactions, (6) ERC721 Token Transactions as shown in Figure 3(b). It is non-trivial to process the raw since it requires substantial efforts in extracting useful information from raw data and associating with six datasets.

Blockchain can also be exploited to conduct illegal activities such as scams. For example, in [10], we propose a method to detect Ponzi scams in Etherium blockchain through extracting and analyzing key characteristics of user accounts and operation codes in Etherium contracts. Figure 5 makes a comparison between a normal contract and a Ponzi scheme contract in terms of Ether Flow Graph, where the horizontal axis denotes the time line, the vertical axis represents the number of participants in a particular contract, red circles and green circles denote the investment transactions and payment transactions, respectively. In addition, the size of circle also represents the amount of transactions, i.e., the larger circle means the larger amount of transactions.

which exhibits more randomness in the number of transactions. After extracting the key features and applying other data mining and machine learning methods, we can successfully classify Ponzi scams from other normal activities.

We believe that the integration of AI with blockchain technology will further drive the benignant development of blockchain systems. We outline the future directions in blockchain intelligence as follows.