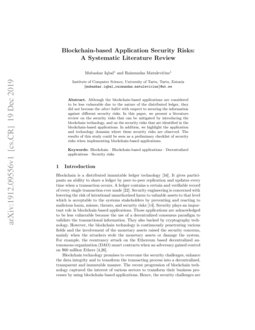 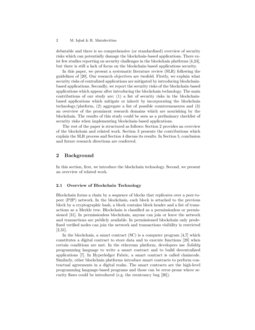 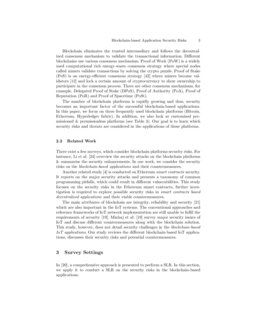 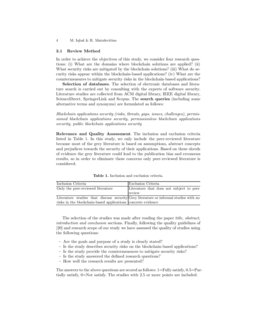 Blockchain is a distributed immutable ledger technology [34]. It gives participants an ability to share a ledger by peer-to-peer replication and updates every time when a transaction occurs. A ledger contains a certain and verifiable record of every single transaction ever made [22]. Security engineering is concerned with lowering the risk of intentional unauthorized harm to valuable assets to that level which is acceptable to the system’s stakeholders by preventing and reacting to malicious harm, misuse, threats, and security risks [14]. Security plays an important role in blockchain-based applications. Those applications are acknowledged to be less vulnerable because the use of a decentralized consensus paradigm to validate the transactional information. They also backed by cryptography technology. However, the blockchain technology is continuously penetrating various fields and the involvement of the monetary assets raised the security concerns, mainly when the attackers stole the monetary assets or damage the system. For example, the reentrancy attack on the Ethereum based decentralized autonomous organization (DAO) smart contracts when an adversary gained control on $60 million Ethers [4, 26].

The rest of the paper is structured as follows: Section 2 provides an overview of the blockchain and related work. Section 3 presents the contributions which explain the SLR process and Section 4 discuss its results. In Section 5, conclusion and future research directions are conferred.

In this section, first, we introduce the blockchain technology. Second, we present an overview of related work.

Blockchain forms a chain by a sequence of blocks that replicates over a peer-to-peer (P2P) network. In the blockchain, each block is attached to the previous block by a cryptographic hash, a block contains block header and a list of transactions as a Merkle tree. Blockchain is classified as a permissionless or permissioned

Blockchain eliminates the trusted intermediary and follows the decentralized consensus mechanism to validate the transactional information. Different blockchains use various consensus mechanism. Proof of Work (PoW) is a widely used computational rich energy-waste consensus strategy where special nodes called miners validate transactions by solving the crypto puzzle. Proof of Stake (PoS) is an energy-efficient consensus strategy [42] where miners become validators [12] and lock a certain amount of cryptocurrency to show ownership to participate in the consensus process. There are other consensus mechanisms, for example, Delegated Proof of Stake (DPoS), Proof of Authority (PoA), Proof of Reputation (PoR) and Proof of Spacetime (PoSt).

The number of blockchain platforms is rapidly growing and thus, security becomes an important factor of the successful blockchain-based applications. In this paper, we focus on three frequently used blockchain platforms (Bitcoin, Ethereum, Hyperledger fabric). In addition, we also look at customised permissioned & permissionless platforms (see Table 3). Our goal is to learn which security risks and threats are considered in the applications of these platforms.

The main attributes of blockchain are integrity, reliability and security [21] which are also important in the IoT systems. The conventional approaches and reference frameworks of IoT network implementation are still unable to fulfil the requirements of security [19]. Minhaj et al. [19] survey major security issues of IoT and discuss different countermeasures along with the blockchain solution. This study, however, does not detail security challenges in the blockchain-based IoT applications. Our study reviews the different blockchain-based IoT applications, discusses their security risks and potential countermeasures.

In [20], a comprehensive approach is presented to perform a SLR. In this section, we apply it to conduct a SLR on the security risks in the blockchain-based applications.

Selection of databases. The selection of electronic databases and literature search is carried out by consulting with the experts of software security. Literature studies are collected from ACM digital library, IEEE digital library, ScienceDirect, SpringerLink and Scopus. The search queries (including some alternative terms and synonyms) are formulated as follows:

Relevance and Quality Assessment. The inclusion and exclusion criteria listed in Table 1. In this study, we only include the peer-reviewed literature because most of the grey literature is based on assumptions, abstract concepts and prejudices towards the security of their applications. Based on these shreds of evidence the grey literature could lead to the publication bias and erroneous results, so in order to eliminate these concerns only peer-reviewed literature is considered.

The selection of the studies was made after reading the paper title, abstract, introduction and conclusion sections. Finally, following the quality guidelines of [20] and research scope of our study we have assessed the quality of studies using the following questions:

The answers to the above questions are scored as follows: 1=Fully satisfy, 0.5=Partially satisfy, 0=Not satisfy. The studies with 2.5 or more points are included.

In this section, we present the SLR results. Table 3 shows how the field of blockchain-based applications is emerging every year. We observe that Ethereum-based applications are gaining popularity among others. Also, permissioned blockchain platforms (Hyperledger Fabric (HLF) & Customised Permissioned (CP)) are arising because of those support various industry-based use cases beyond cryptocurrencies. Practitioners also presented various Customised Permissionless (CPL) platforms to achieve customised tasks and to overcome the limitations of other platforms. The term Generic refers to studies where the blockchain type and platform is not mentioned.

Table 4 presents the quantity of applications domains & technology solutions based on the different blockchain platforms. It shows Healthcare is mostly

studied application domain and security layer as a technology solution. Also, it indicates that Ethereum is widely used blockchain platform for building the decentralized applications.

In this section, we overview countermeasures to mitigate the security risks listed in Table 5 and 6.

Countermeasures introduced with blockchain solution. The security risks presented in Table 5 are mitigated by implementing the blockchain-based applications together with the techniques to mitigate these risks. For instance, Data tampering attack poses a threat to data-sensitive applications. In [40, 41] authors implement the smart contract to mitigate votes tampering. In [35, 40] authors encrypt information and associate a unique hash. Lei et al. [9] propose a random oracle model with strong RSA. And Li et al. [23] introduce an elliptic curve digital signature algorithm (ECDSA) based signature scheme for anonymous data transmission along Merkle hash tree based selective disclosure mechanism. Han et al. [16] propose to use permissioned blockchain where only the authorized nodes are able to access the data as well as generate a cypher-text by using digital signatures.

DoS/DDoS attack is another exploitable cyber-attack, it is resisted by a distribution of service on different nodes [40]. The [25, 11] authors implement an access control scheme to prevent unauthorized requests. Androulaki et al. [3] propose a block-list to track suspicious requesting nodes and the authors of [3, 32] incorporate the transaction fee to resist it. In order to resist the MitM attack, authors suggest to encrypt an information [10, 40] and publish on the blockchain [40]. In [25, 38] research studies, an authentication scheme is introduced to verify each communication node. Identity theft/Hijacking based risks are mitigated by information authentication and message generation time-stamping [13]. Mylrea et al. [30] suggest a permission-based solutions (e.g. KSI). Spoofing attack is mitigated by introducing an anonymous communication among nodes [8] and Keyless Signature Infrastructure (KSI) based distributed & witnesses trust anchor [30].

Countermeasures to mitigate security risks of blockchain solutions. The blockchain solution comes with a few trade-offs and inherits several security risks (see Table 6) of blockchain technology which are mitigated by implementing the various techniques, those techniques are listed below as countermeasures. In order to mitigate the Sybil attack, in [15, 41] authors suggest the permissioned blockchain-based application. Bartolucci et al. [5] incorporate the transaction fee & identification system to allow only authorized users to perform different operations. In [32], authors use the PoR scheme and Liu et al. [27] implement the customised blockchain to control the computing power. Double spending attack is mitigated by the transaction verification based on unspent transaction state [3]. In [1] authors resisted this attack by PoA scheme and in [6] by PoW complexity. Also, the Muzammal et al. [29] append the nonce with each transaction. Another frequent security risk on the blockchain-based applications is 51% attack which is resisted by implementing trusted authorities control [43] and Hjalmarsson et al. [17] customised the Ethereum blockchain to permissioned blockchain.

In order to mitigate Deanonymization attack, in [25] authors propose a solution to obtain identity information only after authorization. Bartolucci et al. [5] propose the mixer for mixing the position of output addresses. In [33, 37] authors propose another solution to mitigate this attack by using the fresh key for each transaction. Selfish mining attack is mitigated by PoR scheme [32] and by raising the threshold [37]. No countermeasure is found for Replay attack. In order to overcome the Quantum computing threats, Yin et al. [39] implement the lattice cryptography and in [6] authors suggest an additional digital signature or a hard fork in the post-quantum era. Decusatis et al. [11] propose a need of quantum blockchain. To eliminate the chances of Smart contract reentrancy attack, authors of [26] present the automation tool to detect smart contract bugs via run-time trace analysis and in [36] authors built a static analysis tool that detects reentrancy bugs in a smart contract and translates solidity source code into an XML-based intermediate representation and checks it against XPath patterns.

As a part of the future work, our aim is to build a comprehensive reference model for security risk management to systematically evaluate the security needs. This model would explain the protected assets of the blockchain-based applications, and countermeasures to mitigate their risks.

Acknowledgement. This research has been supported by the Estonian Research Council (grant IUT20-55).