The sampling Kaczmarz-Motzkin (SKM) method is a generalization of the randomized Kaczmarz and Motzkin methods. It first samples some rows of coefficient matrix randomly to build a set and then makes use of the maximum violation criterion within this set to determine a constraint. Finally, it makes progress by enforcing this single constraint. In this paper, on the basis of the framework of the SKM method and considering the greedy strategies, we present two block sampling Kaczmarz-Motzkin methods for consistent linear systems. Specifically, we also first sample a subset of rows of coefficient matrix and then determine an index in this set using the maximum violation criterion. Unlike the SKM method, in the rest of the block methods, we devise different greedy strategies to build index sets. Then, the new methods make progress by enforcing the corresponding multiple constraints simultaneously. Theoretical analyses demonstrate that these block methods converge at least as quickly as the SKM method, and numerical experiments show that, for the same accuracy, our methods outperform the SKM method in terms of the number of iterations and computing time. 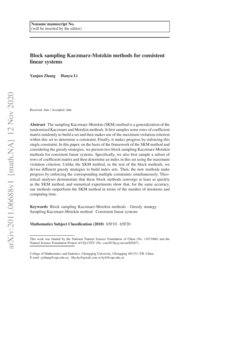 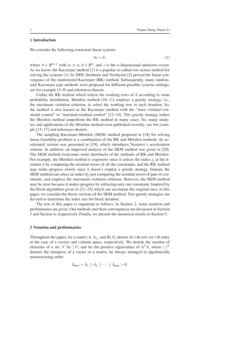 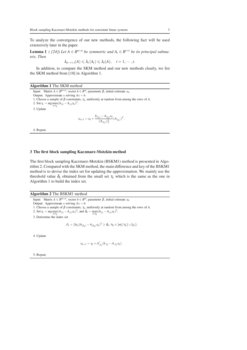 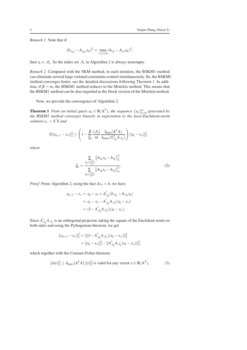 -dimensional unknown vector. As we know, the Kaczmarz method

Unlike the RK method which selects the working rows of A

according to some probability distribution, Motzkin method

Agamon54 ; Motzkin54 employs a greedy strategy, i.e., the maximum violation criterion, to select the working row in each iteration. So, the method is also known as the Kaczmarz method with the “most violated constraint control” or “maximal-residual control” Petra2016 ; Nutini2016 ; Nutini2018 . This greedy strategy makes the Motzkin method outperform the RK method in many cases. So, many analyses and applications of the Motzkin method were published recently; see for example haddock2019motzkin ; rebrova2019sketching ; li2020novel and references therein.

The sampling Kaczmarz-Motzkin (SKM) method proposed in de2017sampling for solving linear feasibility problem is a combination of the RK and Motzkin methods. Its accelerated version was presented in morshed2020accelerated , which introduces Nesterov’s acceleration scheme. In addition, an improved analysis of the SKM method was given in haddock2019greed . The SKM method overcomes some drawbacks of the methods of RK and Motzkin. For example, the Motzkin method is expensive since it selects the index ik at the iteration k by comparing the residual errors of all the constraints, and the RK method may make progress slowly since it doesn’t employ a greedy strategy. Instead, the SKM method can select an index by just comparing the residual errors of part of constraints, and employs the maximum violation criterion. However, the SKM method may be slow because it makes progress by enforcing only one constraint. Inspired by the block algorithms given in needell2014paved ; needell2015randomized ; Niu2020 which can accelerate the original ones, in this paper, we consider the block versions of the SKM method. Two greedy strategies are devised to determine the index sets for block iteration.

The rest of this paper is organized as follows. In Section 2, some notation and preliminaries are given. Our methods and their convergences are discussed in Section 3 and Section 4, respectively. Finally, we present the numerical results in Section 5.

Throughout the paper, for a matrix A, A(i) and R(A) denote its i-th row (or i-th entry in the case of a vector) and column space, respectively. We denote the number of elements of a set I by |I|

and let the positive eigenvalues of

ATA, where (⋅)T denotes the transpose of a vector or a matrix, be always arranged in algebraically nonincreasing order:

To analyze the convergence of our new methods, the following fact will be used extensively later in the paper.

The first block sampling Kaczmarz-Motzkin (BSKM1) method is presented in Algorithm 2. Compared with the SKM method, the main difference and key of the BSKM1 method is to devise the index set for updating the approximation. We mainly use the threshold value δk obtained from the small set τk which is the same as the one in Algorithm 1 to build the index set.

then ik∈Ik. So the index set Ik in Algorithm 2 is always nonempty.

Now, we provide the convergence of Algorithm 2.

From Algorithm 2, using the fact Ax⋆=b, we have

Since A†IkAIk is an orthogonal projector, taking the square of the Euclidean norm on both sides and using the Pythagorean theorem, we get

which together with the Courant-Fisher theorem:

On the other hand, from Algorithm 2, if ik∈Ik, we have

Now, taking expectation of both sides (with respect to the sampled τk), we have

which together with ξk defined in (2) leads to

Further, considering (3), we get

which is the desired result.

According to Lemma 1, it is easy to see that λmin(ATA)λmax(ATIkAIk)≤1, which together with the fact 1≤ξk≤β yields

That is, the convergence factor of the BSKM1 method is indeed smaller than 1.

From Algorithm 2, we know that {x|AIkx=bIk}⊂{x|A(tk)x=b(tk)} since tk∈Ik. Similar to the analysis in haddock2019greed , we can obtain

which together with the fact

In the above expressions, xBSKM1k and xSKMk denote the next approximations generated by the BSKM1 and SKM methods, respectively. Hence, the BSKM1 method converges at least as quickly as the SKM method.

In addition, setting lk=argmax1≤i≤m(b(i)−A(i)xk)2, from Algorithm 2, we can obtain {x|AIkx=bIk}⊂{x|A(lk)x=b(lk)} since lk∈Ik. So, we also immediately get that the BSKM1 method converges at least as quickly as the Motzkin method.

then ik∈Jk. So the index set Jk in Algorithm 3 is always nonempty.

The iteration index tk used for updating of the SKM method belongs to the index set Jk used in the BSKM2 method. So the latter makes progress faster than the former. In addition, If η=1, the BSKM2 method reduces to the Motzkin method.

Now, we bound the expected rate of convergence for Algorithm 3.

Following an analogous argument to Theorem 3.1, we can obtain

Now, taking expectation of both sides, we have

which together with (3) leads to

which is the desired result.

That is, the convergence factor of the BSKM2 method is indeed smaller than 1.

where wi represents the weight corresponding to the ith row. See Necoara2019 ; Du20202 ; li2020greedy ; moorman2020randomized for a detailed discussion on this topic.

In this section, we mainly compare our two block sampling Kaczmarz-Motzkin methods (BSKM1, BSKM2) and the SKM method in terms of the iteration numbers (denoted as “Iteration”) and computing time in seconds (denoted as “CPU time(s)”) using the matrix A∈Rm×n from two sets. One is generated randomly by using the MATLAB function randn, and the other one contains the matrices in Table 1 from the University of Florida sparse matrix collection Davis2011 . To compare these methods more clearly, we set η=β. In addition, for the sparse matrices, the density is defined as follows:

In all the following specific experiments, we generate the solution vector x⋆∈Rn using the MATLAB function randn, and set the vector b∈Rm to be b=Ax⋆. All experiments start from an initial vector x0=0, and terminate once the relative solution error (RES), defined by

For the first class of matrices, that is, the matrices generated randomly, the numerical results of the three methods are presented in Figs. 1–6. Figs. 1–4 show that, with different values of β, the number of iterative steps and computing time of our two methods are less than those of the SKM method. From Figs. 5–6, we find that the BSKM1 and BSKM2 methods vastly outperform the SKM method in terms of the iterations and computing time when the problems are large-scale.

For the second class of matrices, that is, the sparse matrices from Davis2011 , we plot the numerical results on Iteration and CPU time(s) versus β in Figs. 7–12. From these figures, we find that the similar results shown in Figs. 1–4. That is, the BSKM1 and BSKM2 methods converge faster and need less runtime for the same accuracy.

Therefore, in all the cases, our block sampling Kaczmarz-Motzkin methods, i.e., BSKM1 and BSKM2 methods, outperform the SKM method. This is mainly because the latter only updates one index in each iteration while the former enforces multiple greedy indices simultaneously.