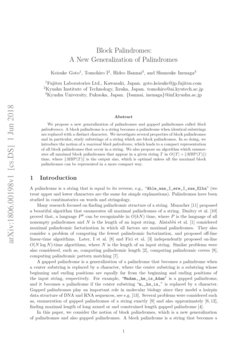 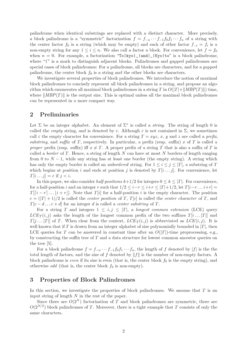 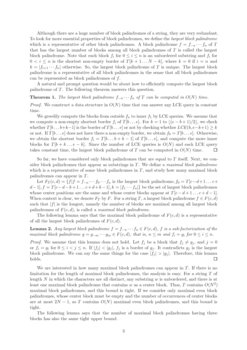 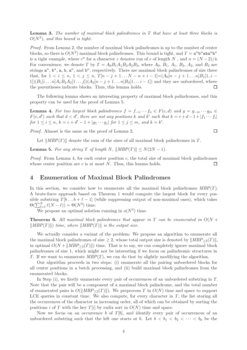 We study systems of String Equations where block variables need to be as...
Laurent Bulteau, et al. ∙

Palindromes are important objects in strings which have been extensively...
Mitsuru Funakoshi, et al. ∙

Whilst there are perhaps only a few scientific methods, there seem to be...
Chrisantha Fernando, et al. ∙

In this paper, we study a certain case of a subgraph isomorphism problem...
Arthur Adinayev, et al. ∙

When a Dollar Makes a BWT

In this paper, we propose a quasigroup based block cipher design. The ro...
Sharwan K. Tiwari, et al. ∙

A palindrome is a string that is equal to its reverse, e.g., “AblewasIereIsawElba” (we treat upper and lower characters are the same for simple explanations). Palindromes have been studied in combinatorics on words and stringology.

Let Σ be an integer alphabet. An element of Σ∗ is called a string. The string of length 0 is called the empty string, and is denoted by ε. Although ε is not contained in Σ, we sometimes call ε the empty character for convenience. For a string T=xyz, x, y and z are called a prefix, substring, and suffix of T, respectively. In particular, a prefix (resp. suffix) x of T is called a proper prefix (resp. suffix) iff x≠T. A non-empty string that is a proper prefix and also a proper suffix of T is called a border of T. Hence, a string of length N can have at most N−1 borders of length ranging from 1 to N−1. A string which does not have any borders is called an unbordered string. For 1≤i≤j≤|T|, a substring of T which begins at position i and ends at position j is denoted by T[i…j]. For convenience, let T[i…j]=ε if j<i.

For a string T and integers 1≤i,j≤|T|, a longest common extension (LCE) query LCE_T(i,j) asks the length of the longest common prefix of the two suffixes T[i…|T|] and T[j…|T|] of T. When clear from the context, LCE_T(i,j) is abbreviated as LCE(i,j). It is well known that if T is drawn from an integer alphabet of size polynomially bounded in |T|, then LCE queries for T can be answered in constant time after an O(|T|)-time preprocessing, e.g., by constructing the suffix tree of T and a data structure for lowest common ancestor queries on the tree [6].

In this section, we investigate the properties of block palindromes. We assume that T is an input string of length N in the rest of the paper.

A natural and prompt question would be about how to efficiently compute the largest block palindrome of T. The following theorem answers this question.

The largest block palindrome f_−n⋯f_n of T can be computed in O(N) time.

The number of maximal block palindromes in T=anbnabanbn that have at least three blocks is Θ(N2), where cn for a character c denotes run of c of length n , and n=(N−2)/4.

Remark that the upper bound is reduced to O(N) if we impose a limitation on the lengths of center blocks.

The following lemma shows an interesting property of maximal block palindromes, and this property can be used for the proof of Lemma 2.

Let ∥MBP(T)∥ denote the sum of the sizes of all maximal block palindromes in T.

In this section, we consider how to enumerate all the maximal block palindromes MBP(T). A brute-force approach based on Theorem 1 would compute the largest block for every possible substring T[b…b+ℓ−1] (while suppressing output of non-maximal ones), which takes Θ(∑_ℓ=1Nℓ(N−ℓ))=Θ(N3) time.

We propose an optimal solution running in o(N3) time.

All maximal block palindromes that appear in T can be enumerated in O(N+∥MBP(T)∥) time, where ∥MBP(T)∥ is the output size.

We actually consider a variant of the problem: We propose an algorithm to enumerate all the maximal block palindromes of size ≥2, whose total output size is denoted by ∥MBP_≥2(T)∥, in optimal O(N+∥MBP_≥2(T)∥) time. That is to say, we can completely ignore maximal block palindromes of size 1, which might not be interesting if we focus on palindromic structures in T. If we want to enumerate MBP(T), we can do that by slightly modifying the algorithm.

Our algorithm proceeds in two steps: (i) enumerate all the pairing unbordered blocks for all center positions in a batch processing, and (ii) build maximal block palindromes from the enumerated blocks.

In Step (i), we firstly enumerate every pair of occurrences of an unbordered substring in T. Note that the pair will be a component of a maximal block palindrome, and the total number of enumerated pairs is O(∥MBP_≥2(T)∥). We preprocess T in O(N) time and space to support LCE queries in constant time. We also compute, for every character in T, the list storing all the occurrences of the character in increasing order, all of which can be obtained by sorting the positions i of T with the key T[i] by radix sort in O(N) time and space.

When we find a pair of occurrences b_l<b_r of an unbordered substring of length ℓ, we list it up as a triple (c,b_r,b_r+ℓ), where c=(b_l+b_r+ℓ−1)/2 is the center of the pairing blocks. After listing up all those triples, we sort them using the first and second elements as keys by radix sort, which can be done in O(N+∥MBP_≥2(T)∥) time and space.

Now we are ready to proceed to Step (ii) in which we build the maximal block palindromes from the sorted list of triples computed in Step (i). For building the maximal block palindromes with center c, we scan the sublist of triples having center c and connect the pairing blocks whose beginning and ending positions are adjacent using the information of the second (the beginning position of the block) and third (the ending position of the block plus one) elements of the triples. We build all the c-centered maximal block palindromes by extending their blocks outwards simultaneously with a 0-initialized array A of length N. When we look at a triple (c,b_r,b_r+ℓ), we write b_r to A[b_r+ℓ], and connect the block with the block ending at b_r−1 if such exists (which can be noticed by the information A[b_r]≠0). Since the block boundaries are not shared due to Lemma 1, the information written in A can be propagated correctly to extend the blocks. It runs in time linear to the size of the sublist. We can also clear A in the same time by scanning the sublist again while writing 0 to the entries we touched.

Since the initialization cost O(N) of A is payed once in the very beginning of Step (ii) and the other computation cost can be charged to the output size, the total time complexity is O(N+∥MBP_≥2(T)∥).

For enumerating MBP(T), we modify Step (ii). While scanning the sublist for center c, we can identify all the positions e≥c such that e is not an ending position of some pairing block, for which the substring T[2c−e…e] is unbordered. If the unbordered substring cannot be extended outwards by blocks (which can also be checked while scanning the sublist), it is the maximal block palindrome of size 1 to output for MBP(T). The algorithm runs in O(N+∥MBP(T)∥) time in total as the additional cost can be charged to the output size.