Blind super-resolution can be cast as low rank matrix recovery problem by exploiting the inherent simplicity of the signal. In this paper, we develop a simple yet efficient nonconvex method for this problem based on the low rank structure of the vectorized Hankel matrix associated with the target matrix. Theoretical guarantees have been established under the similar conditions as convex approaches. Numerical experiments are also conducted to demonstrate its performance. 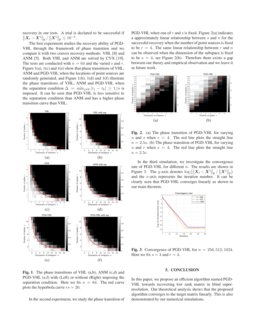 Blind super-resolution of point sources is the problem of simultaneously estimating locations and amplitudes of point sources and point spread functions from low-resolution measurements. Such problem arises in various applications, including single-molecule imaging

Under certain subspace assumption and applying the lifting technique, blind super-resolution can be cast as a matrix recovery problem. Recent works in [7, 17, 9, 15, 5] exploit the intrinsic structures of data matrix and propose different convex relaxation methods for such problem. Theoretical guarantees for these methods have been established. However, due to the limitations of convex relaxation, all of these methods do not scale well to the high dimensional setting.

In contrast to convex relaxation, a non-convex recovery method is proposed in this paper based on the Vectorized Hankel Lift [5] framework. More precisely, harnessing low-rank structure of vectorized Hankel matrix corresponding to the signal in terms of the Burer-Monteiro factorization, we develop a projected gradient descent algorithm, named PGD-VHL, to directly recover the low rank factors. We show that such a simple algorithm possesses a remarkable reconstruction ability. Moreover, our algorithm started from an initial guess converges linearly to the target matrix under the similar sample complexity as convex approaches.

The rest of this paper is organized as follows. We begin with the problem formulation and describe the proposed algorithm in Section 2. Section 3 provides a convergence analysis of PGD-VHL. Numerical experiments to illustrate the performance of PGD-VHL are provided in Section 4. Section 5 concludes this paper.

where dk and τk are the amplitude and location of k-th point source respectively. Let {gk(t)}rk=1 be the unknown point spread functions. The observation is a convolution between x(t) and {gk(t)}rk=1,

After taking Fourier transform and sampling, we obtain the measurements as

Let gk=[^gk[0]⋯^gk[n−1]]T be a vector corresponding to the k-th unknown point spread function. The goal is to estimate {dk,τk}rk=1 as well as {gk}rk=1 from (2.1). Since the number of unknowns is larger than n, this problem is an ill-posed problem without any additional assumptions. Following the same route as that in [7, 17, 9, 5], we assume {gk}rk=1 belong to a known subspace spanned by the columns of B∈Cn×s, i.e.,

Then under the subspace assumption and applying the lifting technique [1], the measurements (2.1) can be rewritten as a linear observations of X♮:=∑rk=1dkhkaTτk∈Cs×n:

where bj is the j-th row of B, ej is the (j+1)-th standard basis of Rn, and aτ∈Cn is the vector defined as

The measurement model (2.2) can be rewritten succinctly as

where A:Cs×n→Cn is the linear operator. Therefore, blind super-resolution can be cast as the problem of recovering the data matrix X♮ from its linear measurements (2.3).

Let H be the vectorized Hankel lifting operator which maps a matrix X∈Cs×n into an sn1×n2 matrix,

where xi is the (i+1)-th column of X and n1+n2=n+1. It is shown that H(X♮) is a rank-r matrix [5] and thus the matrix H(X♮) admits low rank structure when r≪min(sn1,n2). It is natural to recover X by solving the constrained least squares problem

To introduce our algorithm, we assume that X♮ is μ1-incoherent which is defined as below.

be the singular value decomposition of

for some positive constant μ1.

Assumption 2.1 is the same as the one made in [4, 18] for low rank matrix recovery and is used in blind super-resolution [5]. It has been established that Assumption 2.1 is obeyed when the minimum wrap-up distance between the locations of point sources is greater than about 1/n.

where σ1=∥∥H(X♮)∥∥. Since that target data matrix X♮ is μ1-incoherence and the low rank structure of the vectorized Hankel matrix can be promoted by H(X♮)=L♮R♮H, it is natural to recover the low rank factors of the ground truth matrix H(X♮) by solving an optimization problem in the form of

where M=[LHRH]H∈C(sn1+n2)×r, H† is the Moore-Penrose pseudoinverse of H obeying that H†H=I, the second term in objective guarantees that LRH admits vectorized Hankel structure. Last term penalizes the mismatch between L and R, which is widely used in rectangular low rank matrix recovery [16, 19, 6]. The convex feasible set M is defined as follows

where Lℓ is the ℓ-th block of L, μ and σ be two absolute constants such that μ≥μ1 and σ≥σ1.

Inspired by [2], we design a projected gradient descent method for the problem (2.1), which is summarized in Algorithm 1.

The initialization involves two steps: (1) computes the best rank r approximation of H(A∗(y)) via one step hard thresholding Pr(⋅), where A∗ is the adjoint of A ;(2) projects the low rank factors of best rank-r approximated matrix onto the set M. Given a matrix M=[LHRH]H, the projection onto M, denoted by , has a closed form solution:

for 0≤j≤n2−1. Let Mt be the current estimator. The algorithm updates Mt along gradient descent direction −∇f(Mt) with step size η, followed by projection onto the set M. The gradient of f(M) is computed with respect to Wirtinger calculus given by ∇f=[∇HLf∇HRf]H where

To obtain the computational cost of ∇f, we first introduce some notations. Let Hv be the Hankel operator which maps a vector x∈C1×n into an n1×n2 matrix,

where xi is the i-th entry of x. The adjoint of Hv, denoted by H∗v, is a linear mapping from n1×n2 to 1×n. It is known that the computational complexity of both H∗v(LℓRH) and (Hv(x))R is O(rnlogn) flops [3]. Moreover, the authors in [5] show that H(X)=P˜H(X), where ˜H(X) is a matrix constructed by stacking all {Hv(eTℓX)}sℓ=1 on top of one another, and P is a permutation matrix. Therefore we can compute H†(LRH) and H(X)R by using O(srnlogn) flops. Thus the implementation of our algorithm is very efficient and the main computational complexity in each step is O(sr2n+srnlog(n)).

In this section, we provide an analysis of PGD-VHL under a random subspace model.

Assumption 3.1 is a standard assumption in blind super-resolution [7, 17, 9, 14, 5], and holds with μ0=1 by many common random ensembles, for instance, the components of b

with equal probability or

b is uniformly sampled from the rows of a Discrete Fourier Transform (DFT) matrix.

Now we present the main result of the paper.

with probability at least 1−c1(sn)−c2, the sequence {Mt} returned by Algorithm 1 satisfies

where c0,c1,c2 are absolute constants, σr=σr(H(X♮)), κ is the condition number of H(X♮), and the distance dist(M,M♮) is defined as

The detailed proof of Theorem 3.1 is provided in [11]. Compared with the sample complexity established in [5] for the nuclear norm minimization method, which is n≳μ0μ1⋅srlog4(sn), Theorem 3.1 implies that PGD-VHL is sub-optimal in terms of s and r. We suspect that it is merely an artifact of our proof.

Theorem 3.1 implies that PGD-VHL converges to M♮ with a linear rate. Therefore, after T=O((μ0μsrκ)2log(1/ϵ)) iterations, we have dist2(MT,M♮)≤ϵ⋅dist2(M0,M♮). Given the iterates MT returned by PGD-VHL, we can estimate XT by H†(LTRHT).

Once the data matrix X♮ is recovered, the locations {τk}rk=1 can be computed from X♮ by MUSIC algorithm and the weights {dk,hk}rk=1 can be estimated by solving an overdetermined linear system [5].

The first experiment studies the recovery ability of PGD-VHL through the framework of phase transition and we compare it with two convex recovery methods: VHL

In the second experiment, we study the phase transition of PGD-VHL when one of r and s is ﬁxed. Figure 2(a) indicates a approximately linear relationship between s and n for the successful recovery when the number of point sources is ﬁxed to be r=4. The same linear relationship between r and n can be observed when the dimension of the subspace is ﬁxed to be s=4, see Figure 2(b). Therefore there exists a gap between our theory and empirical observation and we leave it as future work.

In the third simulation, we investigate the convergence rate of PGD-VHL for different n. The results are shown in Figure 3. The y-axis denotes log(∥∥Xt−X♮∥∥\footnotesizeF/∥∥X♮∥∥\footnotesizeF) and the x-axis represents the iteration number. It can be clearly seen that PGD-VHL converges linearly as shown in our main theorem.

In this paper, we propose an efficient algorithm named PGD-VHL towards recovering low rank matrix in blind super-resolution. Our theoretical analysis shows that the proposed algorithm converges to the target matrix linearly. This is also demonstrated by our numerical simulations.