Significant advances have been made in artificial systems by using biological systems as a guide. However, there is often little interaction between computational models for emergent communication and biological models of the emergence of language. Many researchers in language origins and emergent communication take compositionality as their primary target for explaining how simple communication systems can become more like natural language. However, there is reason to think that compositionality is the wrong target on the biological side, and so too the wrong target on the machine-learning side. As such, the purpose of this paper is to explore this claim. This has theoretical implications for language origins research more generally, but the focus here will be the implications for research on emergent communication in computer science and machine learning—specifically regarding the types of programmes that might be expected to work and those which will not. I further suggest an alternative approach for future research which focuses on reflexivity, rather than compositionality, as a target for explaining how simple communication systems may become more like natural language. I end by providing some reference to the language origins literature that may be of some use to researchers in machine learning. 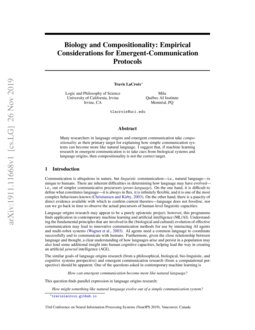 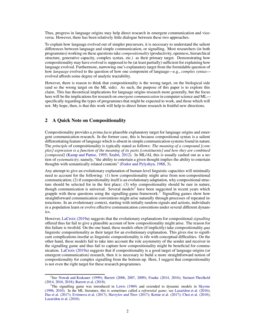 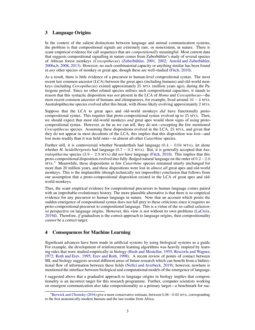 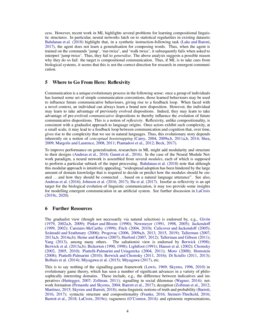 Communication is ubiquitous in nature, but linguistic communication—i.e., natural language—is unique to humans. There are inherent difficulties in determining how language may have evolved—i.e., out of simpler communicative precursors (proto-language). On the one hand, it is difficult to define what constitutes language—it is always in flux, it is infinitely flexible, and it is one of the most complex behaviours known (Christiansen and Kirby, 2003). On the other hand, there is a paucity of direct evidence available with which to confirm current theories—language does not fossilise, nor can we go back in time to observe the actual precursors of human-level linguistic capacities.

Language origins research may appear to be a purely epistemic project; however, this programme finds application in contemporary machine learning and artificial intelligence (ML/AI). Understanding the fundamental principles that are involved in the (biological and cultural) evolution of effective communication may lead to innovative communication methods for use by interacting AI agents and multi-robot systems

(Wagner et al., 2003). AI agents need a common language to coordinate successfully and to communicate with humans. Furthermore, given the close relationship between language and thought, a clear understanding of how languages arise and persist in a population may also lend some additional insight into human cognitive capacities, helping lead the way in creating an artificial general intelligence (AGI).

How can emergent communication become more like natural language?

Thus, progress in language origins may help direct research in emergent communication and vice-versa. However, there has been relatively little dialogue between these two approaches.

To explain how language evolved out of simpler precursors, it is necessary to understand the salient differences between language and simple communication, or signalling. Most researchers (in both programmes) working on these questions take compositionality (productivity, openness, hierarchical structure, generative capacity, complex syntax, etc.) as their primary target. Demonstrating how compositionality may have evolved is supposed to be (at least partially) sufficient for explaining how language evolved. Furthermore, narrowing one’s explanatory target from the formidable question of how language evolved to the question of how one component of language—e.g., complex syntax—evolved affords some degree of analytic tractability.

However, there is reason to think that compositionality is the wrong target, on the biological side (and so the wrong target on the ML side). As such, the purpose of this paper is to explore this claim. This has theoretical implications for language origins research more generally, but the focus here will be the implications for research on emergent communication in computer science and ML—specifically regarding the types of programmes that might be expected to work, and those which will not. My hope, then, is that this work will help to direct future research in fruitful new directions.

2 A Quick Note on Compositionality

Compositionality provides a prima facie plausible explanatory target for language origins and emergent communication research. In the former case, this is because compositional syntax is a salient differentiating feature of language which is absent in simple communication systems found in nature. The principle of compositionality is typically stated as follows: The meaning of a compound [complex] expression is a function of the meaning of its parts [constituents] and how they are combined [composed] (Kamp and Partee, 1995; Szabó, 2012). In ML/AI, this is usually cashed out as a notion of systematicity; namely, “the ability to entertain a given thought implies the ability to entertain thoughts with semantically related contents” (Fodor and Pylyshyn, 1988, 3).

Any attempt to give an evolutionary explanation of human-level linguistic capacities will minimally need to account for the following: (1) how compositionality might arise from non-compositional communication; (2) if compositionality itself is an evolutionary adaptation, why compositional structure should be selected for in the first place; (3) why compositionality should be rare in nature, though communication is universal. Several models111See Nowak and Krakauer (1999); Barrett (2006, 2007, 2009); Franke (2014, 2016); Steinert-Threlkeld (2014, 2016, 2018); Barrett et al. (2018). have been suggested in recent years which grapple with these questions using the signalling-game framework.222The signalling game was introduced in Lewis (1969) and extended to dynamic models in Skyrms (1996, 2010). In the ML literature, this is sometimes called a referential game; see Lazaridou et al. (2016); Das et al. (2017); Evtimova et al. (2017); Havrylov and Titov (2017); Kottur et al. (2017); Choi et al. (2018); Lazaridou et al. (2018). Signalling games show how straightforward communication conventions might arise naturally through processes of repeated interactions. In an evolutionary context, starting with initially random signals and actions, individuals in a population learn or evolve effective communication conventions under several different dynamics.

In the context of the salient distinctions between language and animal communication systems, the problem is that compositional signals are extremely rare, or nonexistent, in nature. There is scant empirical evidence for call sequences that are compositionally meaningful. Most current data that suggests compositional signalling in nature comes from Zuberbühler’s study of several species of African forest monkeys (Cercopithecus) (Zuberbühler, 2001, 2002; Arnold and Zuberbühler, 2006a, b, 2008, 2013). However, no such combinatorial capacity or anything similar has been found in any other species of monkey or great ape, though these are well-studied (Fitch, 2010).

As a result, there is little evidence of a precursor to human-level compositional syntax. The most recent last common ancestor (LCA) between the great apes (including humans) and old-world monkeys (including Cercopithecus) existed approximately 25 mya (million years ago), during the Paleogene period. Since no other related species utilises such compositional capacities, it stands to reason that this syntactic disposition was not present in the LCA of Homo and Cercopithecus—the most recent common ancestor of humans and chimpanzees, for example, lived around 10−4 mya. Australopithecine species evolved after this break, with Homo likely evolving approximately 2 mya.

Further still, it is controversial whether Neanderthals had language (0.4−0.04 mya), let alone whether H. heidelbergensis had language (0.7−0.2 mya). But, it is generally accepted that Australopithecine species (3.9−2.9 mya) did not have language (Fitch, 2010). This implies that this proto-compositional disposition evolved into fully-fledged natural language on the order of 0.2−2.0 mya.333Berwick and Chomsky (2016)

give a more conservative estimate, between

0.06−0.02 mya, corresponding to the first anatomically-modern humans and the last exodus from Africa. Meanwhile, these dispositions in few Catarrhine species remained utterly unchanged for more than 20 million years, and these dispositions were lost in almost all great apes and old-world monkeys. This is the implausible (though technically not impossible) conclusion that follows from our assumption that a proto-compositional disposition existed in the LCA of great apes and old-world monkeys.

Thus, the scant empirical evidence for compositional precursors to human language comes paired with an improbable evolutionary history. The more plausible alternative is that there is no empirical evidence for any precursor to human language in nature. Note that an account which posits the sudden emergence of compositional syntax does not fall prey to these criticisms since it requires no proto-compositional precursor to compositional language. This is a virtue of the so-called saltationist perspective on language origins. However, this view is not without its own problems (LaCroix, 2019d). Therefore, if gradualism is the correct approach to language origins, then compositionality cannot be a correct target.

Significant advances have been made in artificial systems by using biological systems as a guide. For example, the development of reinforcement learning algorithms was heavily inspired by learning rules that were studied empirically in biology

(Bush and Mosteller, 1955; Rescorla and Wagner, 1972; Roth and Erev, 1995; Erev and Roth, 1998). A recent review of points of contact between ML and biology suggests several different areas of future research which can benefit from a bidirectional flow of information between these fields (Neftci and Averbeck, 2019); however, nowhere is mentioned the interface between biological and computational models of the emergence of language.

I suggested above that a gradualist approach to language origins in biology implies that compositionality is an incorrect target for this research programme. Further, computer scientists working on emergent communication also take compositionality as a primary target—a benchmark for success. However, recent work in ML highlights several problems for learning compositional linguistic structures. In particular, neural networks latch on to statistical regularities in existing datasets:

Bahdanau et al. (2018) highlight that, in a synthetic instruction-following task (Lake and Baroni, 2017), the agent does not learn a generalisation for composing words. Thus, when the agent is trained on the commands ‘jump’, ‘run twice’, and ‘walk twice’, it subsequently fails when asked to interpret ‘jump twice’. Thus, they fail to generalise. The above analysis suggests a possible reason why they do so fail: the target is compositional communication. Thus, if ML is to take cues from biological systems, it seems that this is not the correct direction for research in emergent communication.

5 Where to Go From Here: Reflexivity

Communication is a unique evolutionary process in the following sense: once a group of individuals has learned some set of simple communication conventions, those learned behaviours may be used to influence future communicative behaviours, giving rise to a feedback loop. When faced with a novel context, an individual can always learn a brand new disposition. However, the individual may learn to take advantage of previously evolved dispositions. Indeed, they may learn to take advantage of pre-evolved communicative dispositions to thereby influence the evolution of future communicative dispositions. This is a notion of reflexivity. Reflexivity, unlike compositionality, is consistent with a gradualist approach to language origins. Once actors exhibit such complexity, at a small scale, it may lead to a feedback loop between communication and cognition that, over time, gives rise to the complexity that we see in natural languages. Thus, this evolutionary story depends inherently on a notion of conceptual bootstrapping (Carey, 2004, 2009a, 2009b, 2011a, 2011b, 2014; Shea, 2009; Margolis and Laurence, 2008, 2011; Piantadosi et al., 2012; Beck, 2017).

To improve performance on generalisation, researchers in ML might add modularity and structure to their designs (Andreas et al., 2016; Gaunt et al., 2016). In the case of the Neural Module Network paradigm, a neural network is assembled from several modules, each of which is supposed to perform a particular subtask of the input processing. Bahdanau et al. (2018) note that although this modular approach is intuitively appealing, “widespread adoption has been hindered by the large amount of domain knowledge that is required to decide or predict how the modules should be created …and how they should be connected …based on a natural language utterance”. See also, Andreas et al. (2016); Johnson et al. (2016, 2017); Hu et al. (2017). Insofar as reflexivity is an apt target for the biological evolution of linguistic communication, it may too provide some insights for modelling emergent communication in an artificial system. See further discussion in LaCroix (2019c, 2020).

in evolutionary game theory, which has seen a number of significant advances in a variety of philosophically interesting domains. These include, e.g., the difference between indicatives and imperatives

; meta-linguistic notions of truth and probability