In this letter, a binary sparse Bayesian learning (BSBL) algorithm is proposed to slove the one-bit compressed sensing (CS) problem in both single measurement vector (SMV) and multiple measurement vectors (MMVs). By utilising the Bussgang-like decomposition, the one-bit CS problem can be approximated as a standard linear model. Consequently, the standard SBL algorithm can be naturally incorporated. Numerical results demonstrate the effectiveness of the BSBL algorithm. 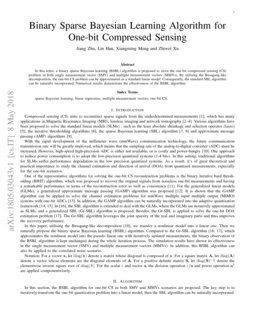 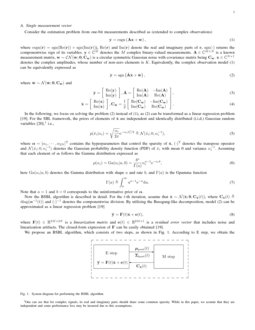 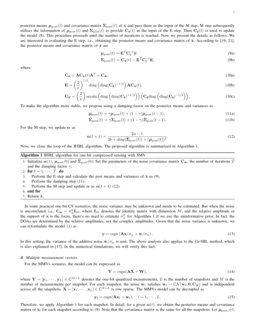 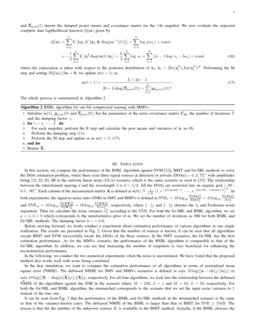 In this letter, the problem of sparse signal reconstruction from one bit...
Zahra Sadeghigol, et al. ∙

With the rapid development of the millimeter wave (mmWave) communication technology, the future communication transmission rate will be greatly improved, which means that the sampling rate of the analog-to-digital converter (ADC) must be increased. However, high-speed high-precision ADC is either not available, or is costly and power-hungry [10]

. One approach to reduce power consumption is to adopt the low-precision quantized systems (1-4 bits). In this setting, traditional algorithms for SLMs suffer performance degradation in the low precision quantized systems. As a result, it’s of great theoretical and practical importance to study the channel estimation and direction of arrival (DOA) from quantized measurements, especially for the one-bit scenarios.

One of the representative algorithms for solving the one-bit CS reconstruction problems is the binary iterative hard thresholding (BIHT) algorithm, which was proposed to recover the original signals from noiseless one-bit measurements and having a remarkable performance in terms of the reconstruction error as well as consistency [11]. For the generalized linear models (GLMs), a generalized approximate message passing (GAMP) algorithm was proposed [12]. It is shown that the GAMP algorithm can be applied to solve the channel estimation problems for mmWave multiple input multiple output (MIMO) systems with one-bit ADCs [13]. In addition, the GAMP algorithm can be naturally incorporated into the adaptive quantization framework [15, 14]. In [16], the SBL algorithm is extended to deal with the GLMs, where the GLMs are iteratively approximated as SLMs, and a generalized SBL (Gr-SBL) algorithm is proposed. Besides, the Gr-SBL is applied to solve the one-bit DOA estimation problem [17]. The Gr-SBL algorithm leverages the joint sparsity of the real and imaginary parts and thus improves the recovery performance.

In this paper, utilising the Bussgang-like decomposition [18], we transfer a nonlinear model into a linear one. Then we naturally propose the binary sparse Bayesian learning (BSBL) algorithm. Compared to the Gr-SBL algorithm [16, 17], which approximates the nonlinear model into the pseudo linear one with iteratively updated measurements, the binary observation of the BSBL algorithm is kept unchanged during the whole iteration process. The simulation results have shown its effectiveness in the single measurement vector (SMV) and multiple measurement vectors (MMVs). In addition, this BSBL algorithm can also be applied to the correlated noise scenario.

Notation: For a vector x, let diag(x) denote a matrix whose diagonal is composed of x. For a square matrix A, let diag(A) denote a vector whose elements are the diagonal elements of A. For a positive definite matrix S, let diag(S)−12 denote the elementwise inverse square root of diag(S). For the scalar c and vector a, the division operation c/a and power operation a2 are applied componentwisely.

In this section, the BSBL algorithm for one-bit CS in both SMV and MMVs scenarios are proposed. The key step is to iteratively transform the one-bit quantization problem into a linear model, then the SBL algorithm can be naturally incorporated.

where csgn(r)=sgn(Re(r))+sgn(Im(r))j, Re(r) and Im(r) denote the real and imaginary parts of r, sgn(⋅) returns the componentwise sign of its variables. y∈CM denotes the M complex binary-valued measurements. A∈CM×N is a known measurement matrix, is a circular symmetric Gaussian noise with covariance matrix being Cw. x∈CN×1 denotes the complex amplitudes, whose number of non-zero elements is K. Equivalently, the complex observation model (1) can be equivalently expressed as

In the following, we focus on solving the problem (2) instead of (1), as (2) can be transformed as a linear regression problem [19]. For the SBL framework, the priors of elements of ¯x

[20],111One can see that for complex signals, its real and imaginary parts should share some common sparsity. While in this paper, we assume that they are independent and some performance loss may be incurred due to this assumptions. i.e.,

contains the hyperparameters that control the sparsity of

with mean 0 and variance

α−1i. Assuming that each element of α

follows the Gamma distribution expressed as

here Ga(αi|a,b) denotes the Gamma distribution with shape a and rate b, and Γ(a) is the Gpamma function

Note that a=1 and b=0 corresponds to the uninformative prior of α.

Now the BSBL algorithm is described in detail. For the t-th iteration, assume that ¯x∼N(¯x;0,C¯x(t)), where C¯x(t)≜diag(α−1(t)) and (⋅)−1 denotes the componentwise division. By utilising the Bussgang-like decomposition, model (2) can be approximated as a linear regression problem [19]

where F(t)∈R2M×2N is a linearization matrix and e(t)∈R2M×1 is a residual error vector that includes noise and linearization artifacts. The closed-form expression of F can be easily obtained [19].

We propose an BSBL algorithm, which consists of two steps, as shown in Fig. 1.

To make the algorithm more stable, we propose using a damping factor on the posterior means and variances as

For the M step, we update α as

Now, we close the loop of the BSBL algorithm. The proposed algorithm is summarized in Algorithm 1.

In some practical one-bit CS scenarios, the noise variance may be unknown and needs to be estimated. But when the noise is uncorrelated, i.e., Cw=σ2wIM, where IM

denotes the identity matrix with dimension

In this setting, the variance of the additive noise w/σw is unit. The above analysis also applies to the Gr-SBL method, which is also explained in [17]. In the numerical simulations, we will verify this fact.

For the MMVs scenario, the model can be expressed as

where Y=[y1,⋯,yL]∈CM×L denotes the one-bit quantized measurements, L is the number of snapshots and M is the number of measurements per snapshot. For each snapshot, the noise wl satisfies wl∼CN(wl;0,Cw) and is independent across all the snapshots. X=[x1,⋯,xL]∈CN×L is row sparse. The MMVs model can be decoupled as

where the expectation is taken with respect to the posterior distribution of ¯xl, ¯xl=[Re(xTl),Im(xTl)]T. Performing the M step and setting ∂Q(α)/∂α=0, we update α(t+1) as

The whole process is summarized in Algorithm 2.

In this section, we compare the performance of the BSBL algorithm against SVM [22], BIHT and Gr-SBL methods to solve the DOA estimation problem, where there exist three signal sources at direction of arrivals (DOAs) [−3,2,75]∘ with amplitudes being [12,22,20] dB in the uniform linear array (ULA) scenario, which is the same scenario as used in [23]. The relationship between the interelement spacing d and the wavelength λ is d=λ/2. All the DOAs are restricted into an angular grid [−90:0.5:90]∘. Each column of the measurement matrix A is defined as a(θl)≜1√M[1,e−j2πdsinθl/λ,⋯,e−j2π(M−1)dsinθl/λ]T. In both experiments, the signal-to-noise ratio (SNR) in SMV and MMVs is defined as SNRs=10log10E∥Ax∥22E∥w∥22=10log10E∥Ax∥22Mσ2w and SNRm=10log10E∥AX∥2FE∥W∥2F=10log10E∥AX∥2FMLσ2w, respectively, where ∥⋅∥2 and ∥⋅∥F denotes the l2 and Frobenius norm separately. Then we calculate the noise variance σ2w according to the SNR. For both the Gr-SBL and BSBL algorithm, we set a=1, b=0 which corresponds to the uninformative prior of α. We set the number of iterations as 500 for both BSBL and Gr-SBL methods. The damping factor is γ=0.6.

Before moving forward, we firstly conduct a experiment about estimation performance of various algorithms in one single realization. The results are presented in Fig. 2. Given that the number of sources is known, it can be seen that all algorithms except BIHT and SVM successfully locate the DOAs of the three sources. In the SMV scenarios, the Gr-SBL has the best estimation performance. As for the MMVs scenario, the performance of the BSBL algorithm is comparable to that of the Gr-SBL algorithm. In addition, we can see that increasing the number of snapshots is very beneficial for enhancing the reconstruction performance.

In the following, we conduct the two numerical experiments when the noise is uncorrelated. We have found that the proposed method also works well with noise being correlated.

In the first simulation, we want to compare the estimation performance of all algorithms in terms of normalized mean square error (NMSE). The debiased NMSE for SMV and MMVs scenarios is defined as minc 10log(∥x−c^x∥2/∥x∥2) or minc 10log(∥X−diag(c)^X∥F)/∥X∥F, respectively. For all four algorithms, we look into the relationship between the debiased NMSE of the algorithms against the SNR in the scenario where M=256, L=1 and M=64, L=50, respectively. For both the Gr-SBL and BSBL algorithm, the mismatched corresponds to the scenario that we set the input noise variance to 1 instead of the true one.

It can be seen from Fig. 3 that the performance of the BSBL and Gr-SBL methods in the mismatched scenario is the same as that of the variance-known cases. The debiased NMSE of the BSBL is larger than that of BIHT for SNR≥15dB. The reason is that the the number of the unknown sources K is available to the BIHT method. Actually, if the BSBL chooses the top K magnitudes, it achieves a lower debiased NMSE, as seen in Fig. 3. Utilizing the information of K significantly reduces the debiased NMSE of the BSBL algorithm in the SMV settings. In contrast to the SMV settings, the effect of utilizing K becomes smaller in the MMVs settings. The reason is that the BSBL algorithm without knowing K can locate the source more accurately in the MMVs settings, as shown in Fig. 2. As for the running time, from Table I, we can see that the BIHT is the fastest, and the Gr-SBL with MMVs is the slowest. The running time of the BSBL with MMVs is much faster than that of itself in the SMV setting.

We propose a BSBL algorithm to cope with the one-bit CS reconstruction problems. The proposed algorithm transfers the original nonlinear problem into a linear one and naturally takes the standard SBL framework into consideration. Algorithms for both the SMV and MMVs scenarios are introduced. Furthermore, simulations demonstrate the effectiveness of the proposed algorithm, especially in the MMVs scenario.