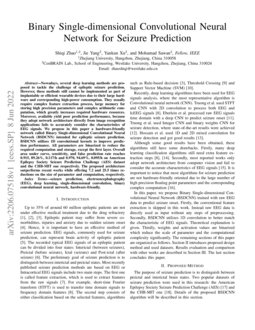 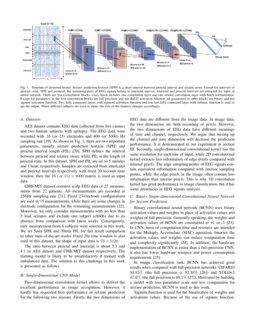 Cardiovascular disease (CVDs) is one of the universal deadly diseases, a...
Hanshi Sun, et al. ∙

From DNNs to GANs: Review of efficient hardware architectures for deep learning

Up to 35% of around 60 million epileptic patients are not under effective medical treatment due to the drug refractory[ngugi2010estimation], [kwan2000early], [assi2017towards]. Epileptic patient may suffer from severe comorbidities, injuries and anxiety due to sudden seizure onset[racine1972modification]. Hence, it is important to have an effective method of seizure prediction. EEG signals, commonly used for seizure prediction, can represent brain activity of epileptic patient[mirowski2009classification]. The recorded typical EEG signals of an epileptic patient can be divided into four states: Interictal (between seizures), Preictal (before seizure), Ictal (seizure) and Post-ictal (after seizure)[mormann2006seizure]. The preliminary goal of seizure prediction is to distinguish between interictal and preictal states. Most recently published seizure prediction methods are based on EEG or Intracortical EEG signals include two main steps. The first one is called feature extraction, which is used to extract features from the raw signals[shahnaz2015seizure]

[truong2018convolutional]. The second step consists of either classification based on the selected features, algorithms such as Rule-based decision[assi2017towards], Threshold Crossing[eftekhar2014ngram]

Although some good results have been obtained, these algorithms still have some drawbacks. Firstly, many deep learning classification algorithms still need extra feature extraction steps[truong2018convolutional],[tsou2019epilepsy]

. Secondly, most reported works only adopt network architecture from computer vision and fail to consider the accurate characteristics of EEG signals

[korshunova2017towards]. It is important to notice that most algorithms for seizure prediction are not hardware-friendly oriented due to the large number of high precision floating point parameters and the corresponding complex computation[marni2018real].

In this paper, we propose Binary Single-dimensional Convolutional Neural Network (BSDCNN) trained with raw EEG data to predict seizure onset. Firstly, the conventional feature extraction is skipped in this work. Instead raw EEG data is directly used as input without any steps of preprocessing. Secondly, BSDCNN utilizes 1D convolution to better match the characteristic of EEG signals. Theoretical explanation is given. Thirdly, weights and activation values are binarized which reduce the scale of parameter and the computational complexity significantly. The remaining sections of this paper are organized as follows. Section II introduces proposed design method and used datasets. Results evaluation and comparison with other works are described in Section III. The last section concludes this paper.

The purpose of seizure prediction is to distinguish between preictal and interictal brain states. Two popular datasets of seizure prediction were used in this research: the American Epilepsy Society Seizure Prediction Challenge (AES) [brinkmann2016crowdsourcing] and the CHB-MIT one[goldberger2000physiobank]. Details of the proposed BSDCNN algorithm will be described in this section.

AES dataset contains EEG data collected from five canines and two human subjects with epilepsy. The EEG data were recorded with 16 (or 15) electrodes and 400 (or 5000) Hz sampling rate[karoly2017circadian]. As shown in Fig. 1, there are two important parameters, namely seizure prediction horizon (SPH) and preictal interval length (PIL)[assi2015hybrid]. SPH defines the interval between preictal and seizure onset, while PIL is the length of preictal state. In this dataset, SPH and PIL are set to 5 minutes and 1 hour, respectively. Samples are extracted from intericatal and preictal intervals respectively with fixed 20-seconds time window, then the 16 (or 15)×8000 matrix is used as input data.

CHB-MIT dataset contains scalp EEG data of 23 measurements from 22 patients. All measurements are recorded at 256Hz sampling rate[furbass2015prospective]. Fixed 23-electrode configurations are used in 15 measurements, while there are some changes in electrode configuration for the remaining measurements[alickovic2018performance]. Moreover, we only consider measurements with no less than 3 lead seizures and exclude one subject (chb06) due to its absence from comparison with latest works. Consequently, only measurement from 6 subjects were selected in this work. We set 5min SPH and 30min PIL for fair result comparison to other state-of-the-art works. Fixed 20s time window is also used in this dataset, the shape of input data is 23×5120.

The ratio between preictal and interictal is about 5:1 and 4:1 in AES dataset and CHB-MIT dataset respectively. The training model is likely to be unsatisfactory if trained with imbalanced data. The solution to this challenge in this work is presented as follows.

Two-dimensional convolution kernel allows to deliver the excellent performance in image recognition. However, it hardly has requested best performance in seizure prediction for the following two reasons. Firstly, the two dimensions of EEG data are different from the image data. In image data, the two dimensions are both recording of pixels. However, the two dimensions of EEG data have different meanings of time and channel, respectively. We argue that mixing up the channel and time dimension will decrease the prediction performance. It is demonstrated in our experiment in section III. Secondly, single-dimensional convolutional kernel has the same resolution for each line of input, while 2D convolutional kernel extracts less information of edge pixels compared with internal pixels. The edge sampling points of EEG signals contain equivalent information compared with interior sampling points, while the edge pixels in the image often contain less information than interior pixels. This is why 1D convolution kernel has great performance in image classification, but it has some drawbacks in EEG signals analysis.

In image classification task, BCNN has achieved good results when compared with full-precision networks. CIFAR10 89.85% (the full precision is 92.38%[courbariaux2016binarized]) and YOLOv2 67.6% (the full precision is 69.1%[nakahara2018lightweight]). Motivated by building a model with less parameter scale and less computation for seizure prediction, BCNN is used in this work.

Signum function is used for the binarization of weights and activations values. Because of the use of signum function, the gradient will be 0 when back propagation. To make the gradient can be propagated, we must limit the gradient by the following equation[courbariaux2016binarized]:

In back propagation, signum function is replaced by equation (1). It means that the gradient of this node is constrained to 1 when input is between -1 and 1, while the gradient of this node is 0 at other input values. It should be noted that in the training process, we also retain the full-precision weights. When back propagation, the full-precision weights are updated in back propagation, while the binarization are applied only in forward propagation. Since the impact on the difference in the distribution of data for each batch, the speed of convergence and training effect will be affected greatly when binarization of activation values. Batch normalization is added before signum activation function in every convolutional block, which improves the convergence speed and training effect of the model[ioffe2015batch].

In order to overcome problems of imbalanced dataset and improve the performance, when we extract preictal samples to make up training dataset with 5s overlapping, but interictal samples are extracted without overlapping. This is equivalent to oversampling the small amount of preictal data. In addition, the 16 training data are randomly extracted from both interictal and preictal for training. Accordingly, this method ensures that 32 training data of every batch will include the same number of two types of data. By using these methods, the influence of imbalanced data is reduced to some extent.

The model was trained for 20 epochs. For one epoch, the training process takes average 605s and 76s on AES and CHB-MIT dataset respectively. Proposed model is implemented in Python 3.6 with use of Keras 2.2 with a Tensorflow 1.13 backend on single NVIDIA 2080Ti GPU

In order to compare with other state-of-the-art works, we evaluate our model with the following metrics: sensitivity, false prediction rate (FPR) and area under curve (AUC).

TABLE II compares the parameter scales of convolutional block between BSDCNN and high precision CNN with 32bit floating points called SDCNN. Compared to high precision CNN, 7.2 times reduction of parameter memory by using BSDCNN. Moreover, it also reduces the computation about 25.5 times through calculation of bit number multiplication and accumulation. It is important to note that all our calculations include batch normalization layer. The test results of SDCNN and BSDCNN in different datasets are shown in the Fig. 2 and the average AUC of SDCNN and BSDCNN are shown in TABLE IV. As can be seen from the results, using BSDCNN only reduces the average AUC of 2.74% compared to using SDCNN.

Finally, we compare our model with other recent state-of-the-art works based on CNN. Table III and Table IV demonstrate comparisons of performance on AES and CHB-MIT datasets respectively. Truong et al. [truong2018convolutional] and Khan et al.[khan2017focal] use extra feature extraction steps, while Eberlein et al.[eberlein2018convolutional] use raw EEG data directly. The proposed method achieved the highest AUC, sensitivity and FPR/h among others.

The authors would like to acknowledge start-up funds from Westlake University to the Cutting-Edge Net of Biomedical Research and INnovation (CenBRAIN) to support this project.