We show analytically that removing sigmoid transformation in the SGNS objective does not harm the quality of word vectors significantly and at the same time is related to factorizing a binarized PMI matrix which, in turn, can be treated as an adjacency matrix of a certain graph. Empirically, such graph is a complex network, i.e. it has strong clustering and scale-free degree distribution, and is tightly connected with hyperbolic spaces. In short, we show the connection between static word embeddings and hyperbolic spaces through the binarized PMI matrix using analytical and empirical methods. 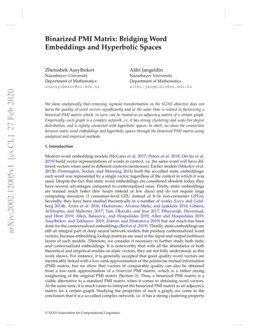 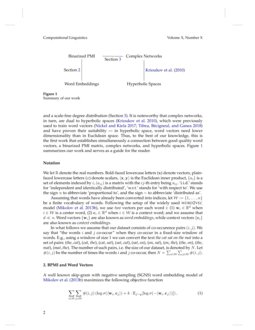 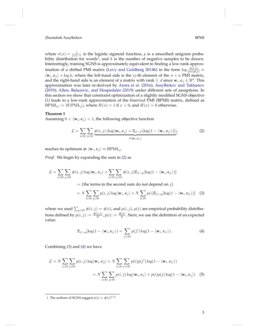 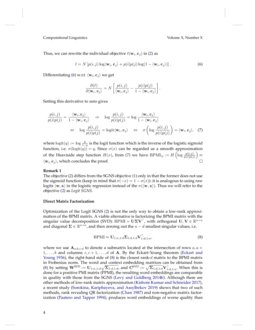 Modern word embedding models McCann et al. (2017); Peters et al. (2018); Devlin et al. (2019) build vector representations of words in context, i.e. the same word will have different vectors when used in different contexts (sentences). Earlier models Mikolov et al. (2013b); Pennington et al. (2014) built the so-called static embeddings: each word was represented by a single vector, regardless of the context in which it was used. Despite the fact that static word embeddings are considered obsolete today, they have several advantages compared to contextualized ones. Firstly, static embeddings are trained much faster (few hours instead of few days) and do not require large computing resources (1 consumer-level GPU instead of 8–16 non-consumer GPUs). Secondly, they have been studied theoretically in a number of works Levy and Goldberg (2014b); Arora et al. (2016); Hashimoto et al. (2016); Gittens et al. (2017); Tian et al. (2017); Ethayarajh et al. (2019); Allen et al. (2019); Allen and Hospedales (2019); Assylbekov and Takhanov (2019); Zobnin and Elistratova (2019) but not much has been done for the contextualized embeddings Reif et al. (2019)

. Thirdly, static embeddings are still an integral part of deep neural network models that produce contextualized word vectors, because embedding lookup matrices are used at the input and output (softmax) layers of such models. Therefore, we consider it necessary to further study both static and contextualized embeddings. It is noteworthy that with all the abundance of both theoretical and empirical studies on static vectors, they are not fully understood, as this work shows. For instance, it is generally accepted that good quality word vectors are inextricably linked with a low-rank approximation of the pointwise mutual information (PMI) matrix, but we show that vectors of comparable quality can also be obtained from a low-rank approximation of a

We let R denote the real numbers. Bold-faced lowercase letters (x) denote vectors, plain-faced lowercase letters (x) denote scalars, ⟨x,y⟩ is the Euclidean inner product, {ai} is a set of elements indexed by i, (aij) is a matrix with the ij-th entry being aij. ‘i.i.d.’ stands for ‘independent and identically distributed’, ‘w.r.t.’ stands for ‘with respect to’. We use the sign ∝ to abbreviate ‘proportional to’, and the sign ∼ to abbreviate ‘distributed as’.

Assuming that words have already been converted into indices, let W:={1,…,n} be a finite vocabulary of words. Following the setup of the widely used word2vec model Mikolov et al. (2013b), we use two vectors per each word i: (1) wi∈Rd when i∈W is a center word, (2) ci∈Rd when i∈W is a context word; and we assume that d≪n. Word vectors {wi} are also known as word embeddings, while context vectors {ci} are also known as context embeddings.

is the logistic sigmoid function,

is a smoothed unigram probability distribution for words

111The authors of SGNS suggest p(i)∝#(i)3/4., and k is the number of negative samples to be drawn. Interestingly, training SGNS is approximately equivalent to finding a low-rank approximation of a shifted PMI matrix Levy and Goldberg (2014b) in the form logp(i,j)p(i)p(j)≈⟨wi,cj⟩+logk, where the left-hand side is the ij-th element of the n×n PMI matrix, and the right-hand side is an element of a matrix with rank ≤d since wi,cj∈Rd. This approximation was later re-derived by Arora et al. (2016); Assylbekov and Takhanov (2019); Allen et al. (2019) under different sets of assuptions. In this section we show that constraint optimization of a slightly modified SGNS objective (1) leads to a low-rank approximation of the binarized PMI (BPMI) matrix, defined as BPMIij:=H(PMIij), where H(x)=1 if x>0, and H(x)=0 otherwise.

reaches its optimum at ⟨wi,cj⟩≈BPMIij.

We begin by expanding the sum in (2) as

Thus, we can rewrite the individual objective ℓ(wi,cj) in (2) as

Differentiating (6) w.r.t. ⟨wi,cj⟩ we get

Setting this derivative to zero gives

is the logit function which is the inverse of the logistic sigmoid function, i.e.

σ(logit(q))=q. Since σ(x) can be regarded as a smooth approximation of the Heaviside step function H(x), from (7) we have BPMIij:=H(logp(i,j)p(i)p(j))≈⟨wi,cj⟩, which concludes the proof. ∎

The objective (2) differs from the SGNS objective (1) only in that the former does not use the sigmoid function (keep in mind that σ(−x)=1−σ(x)): it is analogous to using raw logits ⟨w,x⟩

in the logistic regression instead of the

σ(⟨w,x⟩). Thus we will refer to the objective (2) as Logit SGNS.

Optimization of the Logit SGNS (2

) is not the only way to obtain a low-rank approximation of the BPMI matrix. A viable alternative is factorizing the BPMI matrix with the singular value decomposition (SVD):

where we use Aa:b,c:d to denote a submatrix located at the intersection of rows a,a+1,…,b and columns c,c+1,…,d of A. By the Eckart-Young theorem Eckart and Young (1936), the right-hand side of (8) is the closest rank-d matrix to the BPMI matrix in Frobenius norm. The word and context embedding matrices can be obtained from (8) by setting WSVD:=U1:n,1:d√Σ1:d,1:d, and CSVD:=√Σ1:d,1:dV⊤1:d,1:n. When this is done for a positive PMI matrix (PPMI), the resulting word embeddings are comparable in quality with those from the SGNS Levy and Goldberg (2014b). Although there are other methods of low-rank matrix approximation Kishore Kumar and Schneider (2017), a recent study Sorokina et al. (2019) shows that two of such methods, rank revealing QR factorization Chan (1987) and non-negative matrix factorization Paatero and Tapper (1994), produces word embeddings of worse quality than the truncated SVD. Thus we will consider only the truncated SVD (8) as an alternative to optimizing the Logit SNGS objective (2).

To evaluate the quality of word vectors resulting from the Logit SGNS objective and BPMI factorization, we use the well-known corpus, text8.222http://mattmahoney.net/dc/textdata.html. We were ignoring words that appeared less than 5 times, resulting in a vocabulary of 71,290 tokens. The SGNS and Logit SGNS embeddings were trained using our custom implementation.333https://github.com/zh3nis/BPMI The PMI and BPMI matrices were extracted using the hyperwords tool of Levy et al. (2015) and the truncated SVD was performed using the scikit-learn library of Pedregosa et al. (2011).

The trained embeddings were evaluated on several word similarity and word analogy tasks: WordSim Finkelstein et al. (2002), MEN Bruni et al. (2012), M.Turk Radinsky et al. (2011), Rare Words Luong et al. (2013), Google Mikolov et al. (2013a), and MSR Mikolov et al. (2013c). We used the Gensim tool of Řehůřek and Sojka (2010) for evaluation. We mention here a few key points: (1) Our goal is not to beat state of the art, but to compare PMI-based embeddings (SGNS and PMI+SVD) versus BPMI-based ones (Logit SGNS and BPMI+SVD). (2) For answering analogy questions (a is to b as c is to ?) we use the 3CosAdd method of Levy and Goldberg (2014a) and the evaluation metric for the analogy questions is the percentage of correct answers. The results of evaluation are provided in Table 1. As we can see the LogitSNGS embeddings in general underperform the SGNS ones but not by a large margin. SVD is inferior to SGNS/LogitSGNS especially in the analogy tasks. Overall, it is surprising that such aggressive compression as binarization still retains important information on word vectors.

A remarkable feature of the BPMI matrix is that it can be considered as the adjacency matrix of a certain graph. As usually, by a graph G we mean a set of vertices V and a set of edges E which consists of pairs (i,j) with i,j∈V. It is convenient to represent graph edges by its adjacency matrix (eij), in which eij=1 if (i,j)∈E, and eij=0 otherwise. The graph with V:=W and eij:=BPMIij will be referred to as BPMI Graph. Since BPMIij=1⇔logp(i,j)p(i)p(j)>0⇔p(i,j)>p(i)p(j), only those word pairs (i,j) are connected by an edge which co-occur more often than expected when independence between i and j is assumed.

3.1 Spectrum of the BPMI Graph

First of all, we look at the spectral properties of the BPMI Graphs.444We define the graph spectrum as the set of eigenvalues of its adjacency matrix. For this, we extract BPMI matrices from the text8 and enwik9 datasets using the hyperwords tool of Levy et al. (2015)

. We use the default settings for all hyperparameters, except the word frequency threshold and context window size. We were ignoring words that appeared less than 100 times and 200 times in

correspondingly, resulting in vocabularies of 11,815 and 24,294 correspondingly. We additionally experiment with the context window size 5, which by default is set to 2. The eigenvalues of the PMI matrices are calculated using the

TensorFlow library Abadi et al. (2016), and the above-mentioned threshold of 200 for enwik9 was chosen to fit the GPU memory (12GB, NVIDIA Titan X Pascal). The eigenvalue distributions are provided in Figure 2. The distributions seem to be symmetric, however, the shapes of distributions are far from resembling the Wigner semicircle law x↦12π√4−x2, which is the limiting distribution for the eigenvalues of many random symmetric matrices with i.i.d. entries Wigner (1955, 1958). This means that the entries of a typical BPMI matrix are

dependent, otherwise we would observe approximately semicircle distributions for its eigenvalues. Interestingly, there is a striking similarity between the spectral distributions of the BPMI matrices and of the so-called

3.2 Clustering and Degree Distribution of the BPMI Graph

We constructed BPMI Graphs from the text8 and enwik9 datasets using context windows of sizes 2 and 5 (as in Subsection 3.1), and computed their clustering coefficients (Table 2) as well as degree distributions (Figure 4). Due to a large size of the BPMI-graph of enwik9 we partitioned it in batches of 10,000 words each and averaged clustering coefficients over the batches. To ensure the validity of such an approximation we applied it to the BPMI-graph of text8 and obtained .148 and .232 batch clustering coefficient averages, that are close enough to the original .164 and .235 values for window sizes of 2 and 5 respectively. As we see, the BPMI graphs are complex networks, and this brings us to the hyperbolic spaces.

Hyperbolic geometry is a non-Euclidean geometry that studies spaces of constant negative curvature. This, for example, is associated with Minkowski space-time in the special theory of relativity. In network science, hyperbolic spaces have begun to attract attention because they are well suited for modeling hierarchical data. For example, a regular tree can be isometrically embedded into a Poincare disk B2, which is a model of a Hyperbolic space H2 (see Figure 4): all connected nodes are spaced equally far apart (i.e., all black line segments have identical hyperbolic length). However, to embed the same tree isometrically into Euclidean space one will need an exponential (in tree depth) number of dimensions. Intuitively, hyperbolic spaces can be thought of as continuous versions of trees or vice versa, trees can be thought of as “discrete hyperbolic spaces”. Moreover, Krioukov et al. (2010) showed that complex networks (as defined in Subsection 3.2) and hyperbolic spaces are highly related to each other: (1) scale-free degree distributions and strong clustering in complex networks emerge naturally as simple reflections of the negative curvature and metric property of the underlying hyperbolic geometry; (2) conversely, if a network has some metric structure (strong clustering), and if the network degree distribution is scale-free, then the network has an effective hyperbolic geometry underneath. The curvature and metric of the hyperbolic space are related to the γ and C of the complex network.

It is amazing how the seemingly fragmented sections of scientific knowledge can be closely interconnected. In this paper, we have established a chain of connections between word embeddings and hyperbolic geometry, and the key link in this chain is the binarized PMI matrix. Claiming that hyperbolicity underlies word vectors is not novel Nickel and Kiela (2017); Tifrea et al. (2018). However, this note is the first attempt to justify the connection between hyperbolic geometry and the word embeddings using analytical and empirical methods.