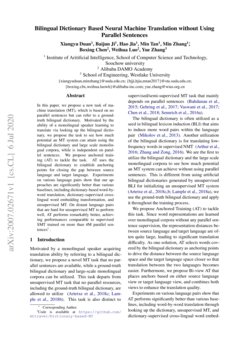 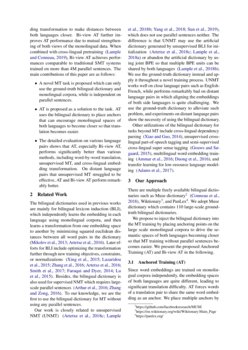 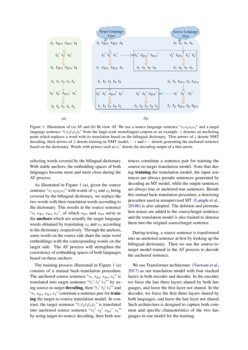 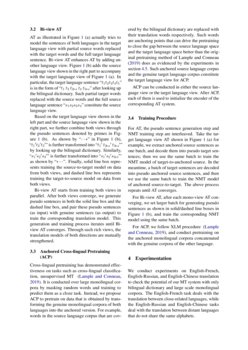 Experiments on various language pairs show that AT performs significantly better than various baselines, including word-by-word translation through looking up the dictionary, unsupervised MT, and dictionary-supervised cross-lingual word embedding transformation to make distances between both languages closer. Bi-view AT further improves AT performance due to mutual strengthening of both views of the monolingual data. When combined with cross-lingual pretraining  Lample2019Cross, Bi-view AT achieves performances comparable to traditional SMT systems trained on more than 4M parallel sentences. The main contributions of this paper are as follows:

The bilingual dictionaries used in previous works are mainly for bilingual lexicon induction (BLI), which independently learns the embedding in each language using monolingual corpora, and then learns a transformation from one embedding space to another by minimizing squared euclidean distances between all word pairs in the dictionary  Mikolov2013Exploiting; Artetxe2016Learning. Later efforts for BLI include optimizing the transformation further through new training objectives, constraints, or normalizations  Xing2015Normalized; Lazaridou2015Hubness; Zhang2016Ten; Artetxe2016Learning; Smith2017Offline; Faruqui2014Improving; Lu2015Deep. Besides, the bilingual dictionary is also used for supervised NMT which requires large-scale parallel sentences  Arthur2016Incorporating; Zhang2016Bridging. To our knowledge, we are the first to use the bilingual dictionary for MT without using any parallel sentences.

We propose to inject the bilingual dictionary into the MT training by placing anchoring points on the large scale monolingual corpora to drive the semantic spaces of both languages becoming closer so that MT training without parallel sentences becomes easier. We present the proposed Anchored Training (AT) and Bi-view AT in the following.

Since word embeddings are trained on monolingual corpora independently, the embedding spaces of both languages are quite different, leading to significant translation difficulty. AT forces words of a translation pair to share the same word embedding as an anchor. We place multiple anchors by selecting words covered by the bilingual dictionary. With stable anchors, the embedding spaces of both languages become more and more close during the AT process.

As illustrated in Figure LABEL:fig:overall (a), given the source sentence “s1s2s3s4” with words of s2 and s3 being covered by the bilingual dictionary, we replace the two words with their translation words according to the dictionary. This results in the source sentence “s1 s2▹t s3▹t s4”, of which s2▹t and s3▹t serve as the anchors which are actually the target language words obtained by translating s2 and s3 according to the dictionary, respectively. Through the anchors, some words on the source side share the same word embeddings with the corresponding words on the target side. The AT process will strengthen the consistency of embedding spaces of both languages based on these anchors.

During testing, a source sentence is transformed into an anchored sentence at first by looking up the bilingual dictionary. Then we use the source-to-target model trained in the AT process to decode the anchored sentence.

Based on the target language view shown in the left part and the source language view shown in the right part, we further combine both views through the pseudo sentences denoted by primes in Figure LABEL:fig:overall (b). As shown by “⇢” in Figure LABEL:fig:overall (b), “t1′t2′t3′” is further transformed into “t1′ t2▹s′ t3▹s′” by looking up the bilingual dictionary. Similarly, “s1′s2′s3′” is further transformed into “s1′s2′s3▹t′” as shown by “⇠”. Finally, solid line box represents training the source-to-target model on data from both views, and dashed line box represents training the target-to-source model on data from both views.

Bi-view AT starts from training both views in parallel. After both views converge, we generate pseudo sentences in both the solid line box and the dashed line box, and pair these pseudo sentences (as input) with genuine sentences (as output) to train the corresponding translation model. This generation and training process iterates until Bi-view AT converges. Through such rich views, the translation models of both directions are mutually strengthened.

Cross-lingual pretraining has demonstrated effectiveness on tasks such as cross-lingual classification, unsupervised MT  Lample2019Cross. It is conducted over large monolingual corpora by masking random words and training to predict them as a cloze task. Instead, we propose ACP to pretrain on data that is obtained by transforming the genuine monolingual corpora of both languages into the anchored version. For example, words in the source language corpus that are covered by the bilingual dictionary are replaced with their translation words respectively. Such words are anchoring points that can drive the pretraining to close the gap between the source language space and the target language space better than the original pretraining method of Lample and Conneau Lample2019Cross does as evidenced by the experiments in section 4.5. Such anchored source language corpus and the genuine target language corpus constitute the target language view for ACP.

ACP can be conducted in either the source language view or the target language view. After ACP, each of them is used to initialize the encoder of the corresponding AT system.

For Bi-view AT, after each mono-view AT converging, we set larger batch for generating pseudo sentences as shown in solid/dashed line boxes in Figure LABEL:fig:overall (b), and train the corresponding NMT model using the same batch.

For ACP, we follow XLM procedure  Lample2019Cross, and conduct pretraining on the anchored monolingual corpora concatenated with the genuine corpora of the other language.

We conduct experiments on English-French, English-Russian, and English-Chinese translation to check the potential of our MT system with only bilingual dictionary and large scale monolingual corpora. The English-French task deals with the translation between close-related languages, while the English-Russian and English-Chinese tasks deal with the translation between distant languages that do not share the same alphabets.

We conduct joint byte-pair encoding (BPE) on the monolingual corpora of both languages with a shared vocabulary of 60k tokens for both English-French and English-Russian tasks, and 40k tokens for English-Chinese task Sennrich2015Neural.

During training, we set the batch size to 32 and limit the sentence length to 100 BPE tokens. We employ the Adam optimizer with lr=0.0001, twarm_up=4000 and dropout=0.1. At decoding time, we generate greedily with length penalty α=1.0.

The upper part of Table 2 presents the results of various baselines and our AT approaches. AT and Bi-view AT significantly outperform the baselines, and Bi-view AT is consistently better than AT. Detailed comparisons are listed as below:

It shows that using the ground-truth dictionary is slightly better than using the artificial one generated by Conneau et al. conneau2017word. Both performances are remarkably bad, indicating that simple word-by-word translation is not qualified as an MT method. More effective utilization of the bilingual dictionary is needed to improve the translation performance.

UNMT-related systems generally improves the performance of the word-by-word translation. On the close-related language pair of English-French, UNMT is better than UNMT+UWET/SWET. This is partly because there are numerous BPE units shared by both English and French, enabling easy establishing the shared word embedding space of both languages. In contrast, WET that transforms the source word embedding into the target language space seems not a necessary initialization step since shared BPE units already establish the shared space.

Comparison between AT/Bi-view AT and The Baselines

ACP+AT/Bi-view AT performs consistently superior to XLM+UNMT. Especially on distant language pairs, ACP+Bi-view AT gains 2.7-9.4 BLEU improvements over the strong XLM+UNMT. This indicates that AT/Bi-view AT with ACP builds closer language spaces via anchored pretraining and anchored training. We present such advantage in the analyses of Section 4.6.

To check the ability of our system using only the dictionary and non-parallel corpora, we make the comparison to supervised SMT trained on over 4M parallel sentences, which are from WMT19 for English-Russian and from LDC for English-Chinese. We use Moses999http://www.statmt.org/moses/. We use the default setting of Moses. as the supervised SMT system with a 5-gram language model trained on the target language part of the parallel corpora.

The bottom part of Table 2 shows that ACP+Bi-view AT performs comparable to supervised SMT, and performs even better on English-to-Russian and English-to-Chinese.

We analyze the cross-lingual property of our approaches in both word level and sentence level. We also compare the performances between the ground-truth dictionary and the artificial dictionary. In the end, we vary the size of the bilingual dictionary and report its impact on the AT training.

As shown in Figure 2

, we depict the word embeddings of some sampled words in English-Chinese after our Bi-view AT. The dimensions of the embedding vectors are reduced to two by using T-SNE and are visualized by the visualization tool in Tensorflow

We sample the English words that are not covered by the dictionary at first, then search their nearest Chinese neighbors in the embedding space. It shows that the words which constitute a new ground-truth translation pair do appear as neighboring points in the 2-dimensional visualization of Figure 2.

We go on with studying bilingual word embedding by quantitative analysis of the new word pairs, which are detected by searching bilingual words that are neighbors in the word embedding space, and evaluate them using the ground-truth bilingual dictionary. In particular, we split the Muse dictionary of Chinese-to-English into standard training set and test set as in BLI  Artetxe2018Robust. The training set is used for the dictionary-based systems, including our AT/Bi-view AT, UNMT+SWET, and Muse, which is a BLI toolkit. The test set is used to evaluate these systems by computing the precision of discovered translation words given the source words in the test set. The neighborhood is computed by CSLS distance  conneau2017word.

Table 3 shows the precision, where precision@k indicates the accuracy of top-k predicted candidate. Muse induces new word pairs through either the supervised way or the unsupervised way. MuseSupervised is better than MuseUnsupervised since it is supervised by the ground-truth bilingual dictionary. Our AT/Bi-view AT surpasses MuseSupervised by a large margin. UNMT+SWET/UWET also obtains good performance through the word embedding transformation. Bi-view AT significantly surpasses UNMT+SWET/UWET in precision@5 and precision@10, while is worse than them in precision@1. This indicates that Bi-view AT can produce better n-best translation words that are beneficial for NMT beam decoding to find better translations.

Through the word level analysis, we can see that AT/Bi-view AT leads to more consistent word embedding space shared by both languages, making the translation between both languages easier.

, we adopt max-pooling operation to collect the sentence representation of each encoder layer for all Chinese-to-English sentence pairs in the test set. Then we calculate the cosine similarity for each sentence pair and average all cosine scores.

We can see that in both word level and sentence level analysis, our AT methods achieve better cross-lingual invariance, significantly reduce the gap between the source language space and the target language space, leading to decreased translation difficulty between both languages.

Both dictionaries use AT methods for translation. As shown in Table 4, the ground-truth dictionary performs significantly better than the artificial dictionary in both methods and both translation directions.

The Effect of The Dictionary Size

In the literature of unsupervised MT that only uses non-parallel corpora, Unsupervised SMT (USMT) and Unsupervised NMT (UNMT) are complementary to each other. Combining them (USMT+UNMT) achieves significant improvement over the individual system, and performs comparable to XLM+UNMT  Lample2018Phrase; artetxe2019acl-effective.

We have set XLM+UNMT as a stronger baseline, and our ACP+AT/Bi-view AT surpasses it significantly. By referring to the literature of unsupervised MT, we can opt to combine ACP+AT/Bi-view AT with SMT. We leave it as a future work.

In this paper, we explore how much potential an MT system can achieve when only using a bilingual dictionary and large-scale monolingual corpora. This task simulates people acquiring translation ability via looking up the dictionary and depending on no parallel sentence examples. We propose to tackle the task by injecting the bilingual dictionary into MT via anchored training that drives both language spaces closer so that the translation becomes easier. Experiments show that, on both close language pairs and distant language pairs, our proposed approach effectively reduces the gap between the source language space and the target language space, leading to significant improvement of translation quality over the MT approaches that do not use the dictionary and the approaches that use the dictionary to supervise the cross-lingual word embedding transformation.