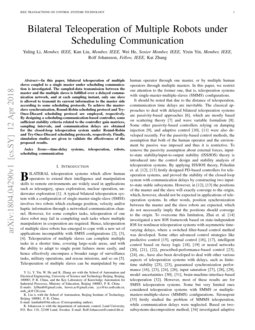 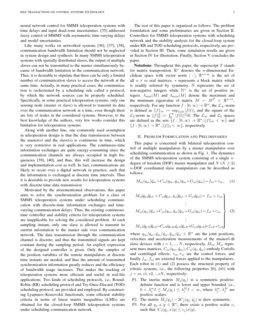 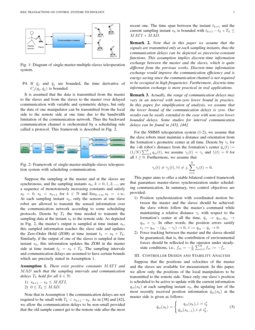 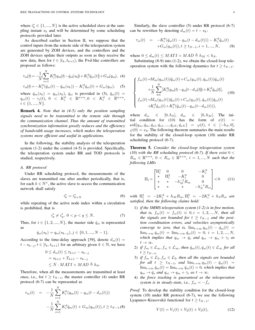 Bilateral teleoperation systems which allow human operators to extend their intelligence and manipulation skills to remote environments are widely used in applications such as telesurgery, space exploration, nuclear operation, underwater exploration [1]. A typical bilateral teleoperation system with a configuration of single-master-single-slave (SMSS) involves two robots which exchange position, velocity and/or haptic information through a networked communication channel. However, for some complex tasks, teleoperation of one slave robot may fail in completing such tasks where multiple manipulators in cooperation are required. Hence, teleoperation of multiple slave robots has emerged to cope with a new set of applications incompatible with SMSS configurations [2, 3, 4]. Teleoperation of multiple slaves can complete multiple tasks in a shorter time, covering large-scale areas, and with the ability to adapt to single point failures more easily, and hence effectively encompass a broader range of surveillance tasks, military operations, and rescue missions, and so on [5]. Teleoperation of multiple slaves can be manipulated by one human operator through one master, or by multiple human operators through multiple masters. In this paper, we restrict our attention to the former one, that is, teleoperation systems with single-master-multiple-slaves (SMMS) configurations.

It should be noted that due to the distance of teleoperation, communication time delays are inevitable. The classical approaches to deal with delayed bilateral teleoperation systems are passivity-based approaches [6], which are mostly based on scattering theory [7] and wave variable formalism [8]. Some other passivity-based controllers relying on damping injection [9], and adaptive control [10, 11] were also developed recently. For the passivity-based control methods, the assumption that both of the human operator and the environment be passive was imposed and thus it is restrictive. To remove the passivity assumption about external forces, input-to-state stability/input-to-output stability (ISS/IOS) theory is introduced into the control design and stability analysis of teleoperation systems. By applying ISS/IOS theory, Polushin et. al. [12, 13] firstly designed PD-based controllers for teleoperation systems, and proved the stability of the closed-loop system with communication delays by constructing two input-to-state stable subsystems. However, in [12, 13] the positions of the master and the slave will exactly converge to the origin, which, however, should not be expected in applications of teleoperation systems. In other words, position synchronization between the master and the slave robots are expected, which do not necessarily imply that the positions should converge to the origin. To overcome this limitation, Zhai et. al. [14] investigated a new IOS framework based on state-independent IOS for nonlinear teleoperation systems with asymmetric time-varying delays, where a switched filter-based control method was developed. Some other advanced control strategies like predictive control [15], optimal control [16, 17], intelligent control based on fuzzy logic [18, 19]

Like many works on networked systems [36, 37, 38], communication bandwidth limitation should not be neglected in system design and synthesis. In many SMMS teleoperation systems with spatially distributed slaves, the output of multiple slaves can not be transmitted to the master simultaneously because of bandwidth limitation in the communication network. Thus, it is desirable to stipulate that there can be only a limited number of communication slaves to access the network at the same time. Actually, in many practical cases, the communication is orchestrated by a scheduling rule called a protocol, by which the network sources can be properly scheduled. Specifically, in some practical teleoperation systems, only one sensing node (master or slave) is allowed to transmit its data over the communication network at a time, even though there are lots of nodes in the considered systems. However, to the best knowledge of the authors, very few works consider this limitation for teleoperation systems.

Along with another line, one commonly used assumption in teleoperation design is that the data transmission between the master(s) and the slave(s) is continuous in time, which is very restrictive in real applications. The continuous-time information exchanges are quite energy-consuming since the communication channels are always occupied in high frequencies [39, 40], and thus, this will increase the design and implementation cost as well. In fact, communications are likely to occur over a digital network in practice, such that the information is exchanged at discrete time intervals. Thus it is desirable to provide new results for teleoperation systems with discrete-time data transmission.

Motivated by the aforementioned observations, this paper aims to solve the synchronization problem for a class of SMMS teleoperation systems under scheduling communication with discrete-time information exchanges and time-varying communication delays. Thus, the existing continuous-time controller and stability criteria for teleoperation systems are inapplicable for solving the considered problem. At each sampling instant, only one slave is allowed to transmit its current information to the master side over communication network. The data transmission through the communication channel is discrete, and thus the transmitted signals are kept constant during the sampling period. An explicit expression of the designed controller is given. Only the samples of the position variables of the remote manipulators at discrete time instants are needed, and thus the amount of transmitted synchronization information greatly reduces and the efficiency of bandwidth usage increases. This makes the tracking of teleoperation systems more efficient and useful in real-life applications. Two kinds of scheduling protocols, i.e., Round-Robin (RR) scheduling protocol and Try-Once-Discard (TOD) scheduling protocol, are provided and employed. By constructing Lyapunov-Krasovskii functionals, some efficient stability criteria in terms of linear matrix inequalities (LMIs) are obtained for the closed-loop SMMS teleoperation systems under scheduling communication network.

The rest of this paper is organized as follows. The problem formulation and some preliminaries are given in Section II. Controllers for SMMS teleoperation systems with scheduling network and the stability analysis for the closed-loop system under RR and TOD scheduling protocols, respectively, are provided in Section III. Then, some simulation results are given in Section IV for illustration. Finally, Section V concludes the paper.

Notations: Throughout this paper, the superscript T stands for matrix transposition. Rn denotes the n

denote the maximum and the minimum eigenvalue of matrix

This paper is concerned with bilateral teleoperation control of multiple manipulators by a master manipulator over scheduling communication as shown in Fig. 1. The dynamics of the SMMS teleoperation system consisting of a single n

where qm/qsi,˙qm/˙qsi,¨qm/¨qsi∈Rn are the joint positions, velocities and acceleration measurements of the master/i-th slave devices with i=1,...,N, respectively. Mm,Msi represent mass matrices, Cm(qm,˙qm),Csi(qi,˙qsi) embody Coriolis and centrifugal effects. τm,τsi are the control forces, and finally fm,fsi are external forces applied to the manipulators. Each robot in (1) and (2) possess the structural property of robotic systems, i.e., the following properties [6], [41] with j=m,s1,s2,...sN, respectively:

There exist positive constants MATI and MAD such that the sampling intervals and communication delays Tk hold for all k∈N:

Note that in Assumption 1 the communication delays are not required to be small with Tk<sk+1−sk. As in [38] and [42], we allow the communication delays to be non-small provided that the old sample cannot get to the remote side after the most recent one. The time span between the instant tk+1 and the current sampling instant sk is bounded with tk+1−tk+Tk≤MATI+MAD.

Suppose that the positions and velocities of the master and the slaves are available for measurement. In this paper, we allow only the positions of the local manipulators to be transmitted to the remote side. Since only one slave’s position is scheduled to be active to update with the current information qsi(sk) at each sampling instant sk, the updating law of the most recently received position information ^qsi(sk) at the master side is given as follows:

where i∗k∈{1,...,N} is the active scheduled slave at the sampling instant sk and will be determined by some scheduling protocols provided later.

As described earlier in Section II, we suppose that the control inputs from the remote side of the teleoperation system are generated by ZOH devices, and the controllers and the ZOH devices update their outputs as soon as they receive the new data, then for t∈[tk,tk+1), the P+d-like controllers are proposed as follows:

Note that in (4-5) only the position sampling signals need to be transmitted to the remote side through the communication channel. Thus the amount of transmitted synchronization information greatly reduces and the efficiency of bandwidth usage increases, which makes the teleoperation systems more efficient and useful in applications.

Under RR scheduling protocol, the measurements of the slaves are transmitted one after another periodically, that is, for each k∈N+, the active slave to access the communication network shall satisfy

while repeating of the active node index within a circulation is prohibited, that is

Therefore, when all the measurements are transmitted at least once, i.e., for t≥tN−1, the master controller (4) under RR protocol (6-7) can be represented as

Similarly, the slave controller (5) under RR protocol (6-7) can be rewritten by denoting dm(t)=t−sk:

Substituting (8-9) into (1-2), we obtain the closed-loop teleoperation system with the following dynamics for t≥tN−1:

with Π1i=−2Kdi+hMRm,Π2i=−2Kdi+hSRsi are satisfied, then the following claims hold:

To develop the stability condition for the closed-loop system (10) under RR protocol (6-7), we use the following Lyapunov-Krasovskii functional for t≥tN−1:

and hence one has

If fm,fsi∈L∞, that is, there exist positive constants Δm,Δsi such that |fm(t)|≤Δm,|fsi(t)|≤Δsi, then the derivative of the Lyapunov functional (12) is given by