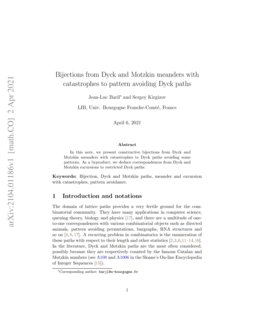 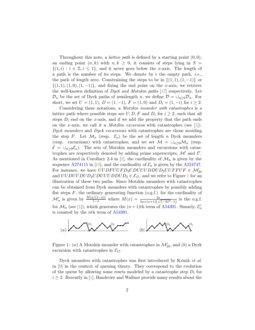 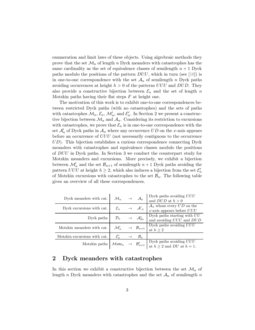 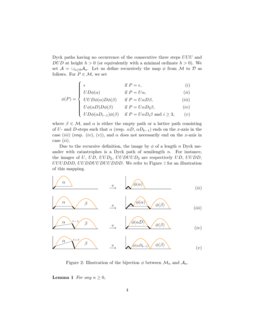 The domain of lattice paths provides a very fertile ground for the combinatorial community. They have many applications in computer science, queuing theory, biology and physics [17], and there are a multitude of one-to-one correspondences with various combinatorial objects such as directed animals, pattern avoiding permutations, bargraphs, RNA structures and so on [4, 8, 17]. A recurring problem in combinatorics is the enumeration of these paths with respect to their length and other statistics [2, 3, 6, 11, 12, 13, 14, 16]. In the literature, Dyck and Motzkin paths are the most often considered, possibly because they are respectively counted by the famous Catalan and Motzkin numbers (see A108 and A1006 in the Sloane’s On-line Encyclopedia of Integer Sequences [15]).

Dyck meanders with catastrophes was first introduced by Krinik et al. in [9] in the context of queuing theory. They correspond to the evolution of the queue by allowing some resets modeled by a catastrophe step Di for i≥2. Recently in [1], Banderier and Wallner provide many results about the enumeration and limit laws of these objects. Using algrebraic methods they prove that the set Mn of length n Dyck meanders with catastrophes has the same cardinality as the set of equivalence classes of semilength n+1 Dyck paths modulo the positions of the pattern DUU, which in turn (see [10]) is in one-to-one correspondence with the set An of semilength n Dyck paths avoiding occurrences at height h>0 of the patterns UUU and DUD. They also provide a constructive bijection between En and the set of length n Motzkin paths having their flat steps F at height one.

In this section we exhibit a constructive bijection between the set Mn of length n Dyck meanders with catastrophes and the set An of semilength n Dyck paths having no occurrence of the consecutive three steps UUU and DUD at height h>0 (or equivalently with a minimal ordinate h>0). We set A=∪n≥0An. Let us define recursively the map ϕ from M to D as follows. For P∈M, we set

Due to the recursive definition, the image by ϕ of a length n Dyck meander with catastrophes is a Dyck path of semilength n. For instance, the images of U, UD, UUD2, UUDUUD3 are respectively UD, UUDD, UUUDDD, UUDDUUDUUDDD. We refer to Figure 2 for an illustration of this mapping.

- if P∈Dn then we have ϕ(P)∈A∗2n, where A∗0={ϵ} and for n≥1, the set A∗2n consists of semilength 2n Dyck paths avoiding the patterns UUU and DUD and starting with UUD.

Whenever P∈Dn+1 we can write P=UαDβ where α,β∈D. Thus, we have ϕ(P)=UUDϕ(α)Dϕ(β), and using the recurrence hypothesis on α and β, ϕ(P) is of semilength 2n+2, starts with UUD and avoids the pattern UUU. Moreover ϕ(α) (resp. ϕ(β)) is either empty or it starts with UUD, which implies that ϕ(P) avoids DUD, and thus ϕ(P)∈A∗2n+2.

- If P=Uα with α∈Mn, then ϕ(P)=UDϕ(α) and the recurrence hypothesis implies that ϕ(P) avoids UUU and DUD at height h>0.

- If P=UαDβ where α∈D and β∈M, then the first part of the proof implies that ϕ(α) avoids UUU and DUD, and with the recurrence hypothesis on β, ϕ(P)=UUDϕ(α)Dϕ(β) belongs to A.

- If P=UαD2β and αD∈D, then using the first part of the proof ϕ(αD) is not empty and avoids UUU and DUD. The recurrence hypothesis implies that ϕ(P)=Uϕ(αD)Dϕ(β) belongs to A.

- If P=UαDiβ where i≥3 and αDi−1 ends on the x-axis, then using a simple induction on i≥2, ϕ(αDi−1) is not empty and avoids UUU and DUD. The recurrence hypothesis implies that ϕ(P)=Uϕ(αDi−1)Dϕ(β)∈A.

The induction is completed. □

Proof. Due to the enumerative results in [1] (see Corollary 2.4) and the above lemma, it suffices to prove that ϕ is injective from Mn to An. We proceed by induction on n. The case n=0 is obvious. For k≤n, we assume that ϕ is an injection from Mk to Ak, and we prove the result for k=n+1.

Considering the previous lemma, it suffices to check that A∗2n is counted by the Catalan numbers in order to prove ϕ(Dn)=A∗2n. A Dyck path P∈A∗2n is either empty or it consists of a sequence of UUDαD where α belongs to A∗2n−2. Let A∗(x) be the generating function for the cardinality of A∗2n (with respect to the semilength). We obtain the following functional equations A∗(x)=1+x2A∗(x)1−x2A∗(x) which implies that A∗2n is counted by the nth Catalan number. Therefore ϕ:Dn→A∗2n is a bijection. □

In [10], it is proven that the set An is a representative set of the equivalence classes modulo the pattern DUU on Dyck paths, i.e. two Dyck paths P and Q are equivalent if and only if the positions of the occurrences DUU are the same in P and Q (see also [3]). So, the bijection ϕ establishes a direct correspondence between these classes and Dyck meanders with catastrophes.

Let A′n be the subset of An consisting of paths P such that any occurrence UD on the x-axis in P appears before an occurrence of UUU (not necessarily contiguous to the occurrence UD). The next theorem gives a bijection between A′n and the set En of length n Dyck excursions with catastrophes.

Proof. Thanks to Theorem 1, it suffices to check that for any P∈En, ϕ(P)∈A′n, and |A′n|=|En|. Any P∈En satisfies one of the cases (i), (iii), (iv) and (v) with β∈E. We proceed by induction on the length in order to prove that ϕ(P)∈A′n. The case (i) is obvious. Whenever P satisfies the cases (iii) or (iv), the only possibility for an occurrence of UD to appear at height zero in ϕ(P)=UUDϕ(α)Dϕ(β) (resp. ϕ(P)=Uϕ(αD)Dϕ(β)) is to be inside ϕ(β). Applying the recurrence hypothesis on β, ϕ(P)∈A′n. For a path P satisfying the case (v), we have seen in the proof of Theorem 1 that ϕ(P) starts necessarily with (UD)k for k≥1 followed by UUU. Using the recurrence hypothesis for β, we obtain ϕ(P)∈A′n. The induction is completed.

Now, let us prove that |A′n|=|En|. Any path P∈A′n satisfies one of the following two cases: (a) P∈An does not contain any occurrence UD on the x-axis, and (b) P=QUDR where Q∈A and R∈A such that R contains at least one occurrence of UUU and avoids any occurrence UD on the x-axis. Let K (resp. ¯¯¯¯K) be the set of Dyck paths in A satisfying (a) (resp. (b)), and let K(x) and ¯¯¯¯¯K(x) be the corresponding generating functions for their cardinalities with respect to the semilength. Obviously, the generating function A′(x) for A′=∪n≥0An satisfies

A nonempty path P∈K can be decomposed P=UαDβ where β∈K and α is a nonempty Dyck path avoiding UUU and DUD. Then either α∈A⋆∖{ϵ} or α=UDα′ with α′∈A⋆. Thus the generating function for K is given by

Due to the form of a path P∈¯¯¯¯K, we deduce the functional equation

In this section we exhibit a constructive bijection between the set M′n of length n Motzkin meanders with catastrophes and the set Bn+1 of semilength n+1 Dyck paths avoiding the patterns UUU at height h≥2. Before defining this bijection we recall that there exists a one-to-one correspondence χ between length n Motzkin paths and semilength n Dyck paths avoiding UUU. From a Dyck path avoiding UUU, we replace each UUD with U, and we replace each remaining UD with F. For instance, the image by χ of UFUDD is UUDUDUUDDD (see [5, 7]).

Clearly, the image by ψ of a length n Motzkin meander with catastrophes is a Dyck path of semilength n+1. For instance, the images by ψ of ϵ, F, UD, UUD2, UUDUUD3 are respectively UD, UDUD, UUDDUD, UUDUDDUD, UUUUDDUDUDDUD. We refer to Figure 3 for an illustration of this mapping.

For n≥0, the map ψ, defined above, induces a bijection from M′n to Bn+1. Moreover, the image of the set of length n Motzkin paths is the set of semilength n+1 Dyck paths avoiding UUU at height h≥2 and the pattern DU at height one.

For n≥0, ψ(E′n) is the set Dyck paths in Bn+1 ending with UD, which implies that ψ induces a one-to-one correspondence from paths P∈E′n to Bn after deleting the last two steps UD from ψ(P).

We would like to thank Cyril Banderier for suggesting us to explore constructive bijections between meanders with catastrophes and Dyck paths avoiding some patterns.