In recent years several attempts have been made to extend tail modelling towards the modal part of the data. Frigessi et al. (2002) introduced dynamic mixtures of two components with a weight function π = π(x) smoothly connecting the bulk and the tail of the distribution. Recently, Naveau et al. (2016) reviewed this topic, and, continuing on the work by Papastathopoulos and Tawn (2013), proposed a statistical model which is in compliance with extreme value theory and allows for a smooth transition between the modal and tail part. Incorporating second order rates of convergence for distributions of peaks over thresholds (POT), Beirlant et al. (2002, 2009) constructed models that can be viewed as special cases from both approaches discussed above. When fitting such second order models it turns out that the bias of the resulting extreme value estimators is significantly reduced compared to the classical tail fits using only the first order tail component based on the Pareto or generalized Pareto fits to peaks over threshold distributions. In this paper we provide novel bias reduced tail fitting techniques, improving upon the classical generalized Pareto (GP) approximation for POTs using the flexible semiparametric GP modelling introduced in Tencaliec et al. (2018). We also revisit and extend the secondorder refined POT approach started in Beirlant et al. (2009) to all max-domains of attraction using flexible semiparametric modelling of the second order component. In this way we relax the classical second order regular variation assumptions. 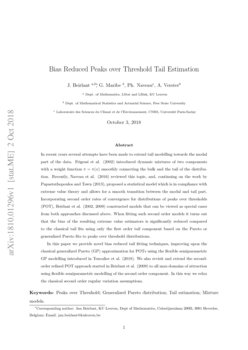 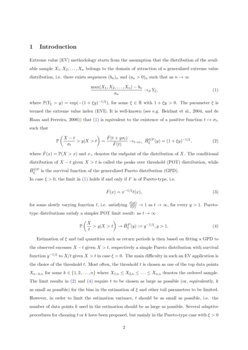 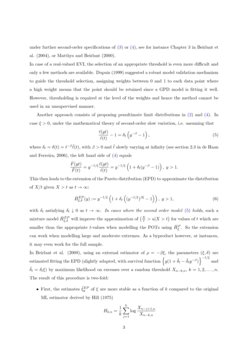 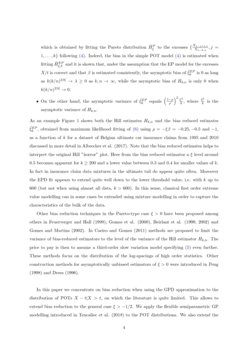 Extreme value (EV) methodology starts from the assumption that the distribution of the available sample X1,X2,…,Xn belongs to the domain of attraction of a generalized extreme value distribution, i.e. there exists sequences (bn)n and (an>0)n such that as n→∞

where ¯F(x)=P(X>x) and x+ denotes the endpoint of the distribution of X. The conditional distribution of X−t given X>t is called the peaks over threshold (POT) distribution, while ¯HGPξ is the survival function of the generalized Pareto distribution (GPD). In case ξ>0, the limit in (1) holds if and only if F is of Pareto-type, i.e.

Estimation of ξ and tail quantities such as return periods is then based on fitting a GPD to the observed excesses X−t given X>t, respectively a simple Pareto distribution with survival function y−1/ξ to X/t given X>t in case ξ>0. The main difficulty in such an EV application is the choice of the threshold t. Most often, the threshold t is chosen as one of the top data points Xn−k,n for some k∈{1,2,…,n} where X1,n≤X2,n≤…≤Xn,n denotes the ordered sample. The limit results in (2) and (4) require t to be chosen as large as possible (or, equivalently, k as small as possible) for the bias in the estimation of ξ

and other tail parameters to be limited. However, in order to limit the estimation variance,

t should be as small as possible, i.e. the number of data points k used in the estimation should be as large as possible. Several adaptive procedures for choosing t or k have been proposed, but mainly in the Pareto-type case with ξ>0 under further second-order specifications of (3) or (4), see for instance Chapter 3 in Beirlant et al. (2004), or Matthys and Beirlant (2000). In case of a real-valued EVI, the selection of an appropriate threshold is even more difficult and only a few methods are available. Dupuis (1999) suggested a robust model validation mechanism to guide the threshold selection, assigning weights between 0 and 1 to each data point where a high weight means that the point should be retained since a GPD model is fitting it well. However, thresholding is required at the level of the weights and hence the method cannot be used in an unsupervised manner.

Another approach consists of proposing penultimate limit distributions in (2) and (4). In case ξ>0, under the mathematical theory of second-order slow variation, i.e. assuming that

This then leads to the extension of the Pareto distribution (EPD) to approximate the distribution of X/t given X>t as t→∞:

with δt satisfying δt↓0 as t→∞. In cases where the second order model (5) holds, such a mixture model ¯HEPξ,δ will improve the approximation of (Xt>u|X>t) for values of t which are smaller than the appropriate t-values when modelling the POTs using ¯HPξ. So the extension can work when modelling large and moderate extremes. As a byproduct however, at instances, it may even work for the full sample. In Beirlant et al. (2009), using an external estimator of ρ=−βξ, the parameters (ξ,δ) are estimated fitting the EPD (slightly adapted, with survival function {y(1+~δt−~δty−β)}−1/ξ and ~δt=δtξ) by maximum likelihood on excesses over a random threshold Xn−k,n, k=1,2,…,n. The result of this procedure is two-fold:

As an example Figure 1 shows both the Hill estimates Hk,n and the bias reduced estimates ^ξEPk, obtained from maximum likelihood fitting of (6) using ρ=−ξβ=−0.25,−0.5 and −1, as a function of k for a dataset of Belgian ultimate car insurance claims from 1995 and 2010 discussed in more detail in Albrecher et al. (2017). Note that the bias reduced estimates helps to interpret the original Hill ”horror” plot. Here from the bias reduced estimator a ξ level around 0.5 becomes apparent for k≥200 and a lower value between 0.3 and 0.4 for smaller values of k. In fact in insurance claim data mixtures in the ultimate tail do appear quite often. Moreover the EPD fit appears to extend quite well down to the lower threshold value, i.e. with k up to 600 (but not when using almost all data, k>600). In this sense, classical first order extreme value modelling can in some cases be extended using mixture modelling in order to capture the characteristics of the bulk of the data.

Other bias reduction techniques in the Pareto-type case ξ>0 have been proposed among others in Feuerverger and Hall (1999), Gomes et al. (2000), Beirlant et al. (1999, 2002) and Gomes and Martins (2002). In Caeiro and Gomes (2011) methods are proposed to limit the variance of bias-reduced estimators to the level of the variance of the Hill estimator Hk,n. The price to pay is then to assume a third-order slow variation model specifying (5) even further. These methods focus on the distribution of the log

-spacings of high order statistics. Other construction methods for asymptotically unbiased estimators of

In this paper we concentrate on bias reduction when using the GPD approximation to the distribution of POTs X−t|X>t, on which the literature is quite limited. This allows to extend bias reduction to the general case ξ>−1/2. We apply the flexible semiparametric GP modelling introduced in Tencaliec et al. (2018) to the POT distributions. We also extend the second-order refined POT approach using ¯HEPξ,δ from (6) to all max-domains of attraction. Here the corresponding basic second order regular variation theory can be found in Theorem 2.3.8 in de Haan and Ferreira (2006) stating that

) using non-parametric modelling of the second-order component. These new methods are also applied to the specific case of Pareto-type distributions.

In the next section we propose our transformed and extended GPD models, and detail the estimation methods. Some basic asymptotic results are provided in section 3. In the final section we discuss simulation results of the proposed methods and some practical case studies. We then also discuss the evaluation of the overall goodness-of-fit behaviour of the fitted models.

Recently, Naveau et al. (2016), generalizing Papastathopoulos and Tawn (2013), proposed to use full models for rainfall intensity data that are able to capture low, moderate and heavy rainfall intensities without a threshold selection procedure. These authors, considering only applications with a positive EVI however, propose to model all data jointly using transformation models with survival function

with ¯G0 and G0 distribution functions on [0,1] linked by G0(u)=1−¯G0(1−u) (0<u<1), and satisfying constraints to preserve the classical tail GPD fit and a power behaviour for small rainfall intensities:

In Naveau et al. (2016) and Tencaliec et al. (2018) the primary goal is the search for a model fitting the whole outcome set, while the fit of the proposed model to POT values X−t|X>t

limu↓0G0(u)u=a. However the bias and MSE properties of the estimators of ξ and σ are still to be analyzed.

To encompass the above mentioned methods from Beirlant et al. (2009), Naveau et al. (2016) and Tencaliec et al. (2018) we propose to approximate P(X−t>y|X>t) with a transformation model with right tail function of the type

We also consider a submodel of (T), approximating the POT distribution with an extended GPD model

Here the parameter η represents a second order (nuisance) parameter. For negative δ-values one needs δt>{minu(1−ddu(uBη(u))}−1 to obtain a valid distribution. At t=0 the function u↦u(1+δ0Bη(u)) then corresponds to u↦G0(u) in (8), while Gt(u)u→1 as t→∞ leads to the GPD survival function ¯HGPξ(x/σ) at large thresholds. Note that model (E) is a direct generalization of the EPD model (6) replacing the Pareto distribution y−1/ξ by the GPD ¯HGPξ and considering a general function Bη(u) rather than uβξ−1=u−ρ−1.

The methods described above of course can be rewritten for the specific case of Pareto-type distributions where the distribution of POTs Y=Xt|X>t are approximated by transformed Pareto distributions. The models are then rephrased as

The above algorithms, now based on the exceedances Yj,k=Xn−j+1,n/Xn−k,n (j=1,…,k), are then adapted as follows: ∙ In algorithm (AT) step (ii.c) is replaced by

with ^Zj,k=Y−1/^ξ(r)kj,k. The resulting estimates are denoted with ^ξT+k and ^GT+k. ∙ In approach (E) the likelihood solutions are given by

Estimators of tail probabilities are then given by

We discuss here in detail the asymptotic properties of the maximum likelihood estimators solving (10) and (11). To this end, as in Beirlant et al. (2009) we develop the likelihood equations up to linear terms in δk since δk→0 with decreasing value of k. Below we set ¯Hθ(y)=(1+τy)−1/ξ when using extended GPD modelling, while ¯Hθ(y)=y−1/ξ when using extended Pareto modelling under ξ>0.

Extended Pareto POT modelling. The likelihood problem (11) was already considered in Beirlant et al. (2009) in case of parametric modelling for Bη. We here propose a more general treatment. The limit statements in the derivation can be obtained using the methods from Beirlant et al. (2009). The likelihood equations following from (11) are given by

Extended Generalized Pareto POT modelling. The likelihood equations following from (10) up to linear terms in δk are now given by

Under the extended model we now state the asymptotic distribution of the estimators ^ξE+k and ^ξEk. To this end let Q denote the quantile function of F, and let U(x)=Q(1−x−1) denote the corresponding tail quantile function. Model assumption (E) can be rephrased in terms of U:

where hξ(x)=(xγ−1)/γ and δ(U) regularly varying with index ~ρ<0. Moreover in the mathematical derivations one needs the extra condition that for every ϵ,ν>0, and v,vx sufficiently large

Similarly, (E+) is rewritten as

The analogue of (~E2) in this specific case is given by

with δ(U) regularly varying with index ρ<0. Finally, in the expression of the asymptotic variances we use

The proof of the next theorem is outlined in the Appendix. It allows to construct confidence intervals for the estimators of