Bi-log-concavity: some properties and some remarks towards a multi-dimensional extension 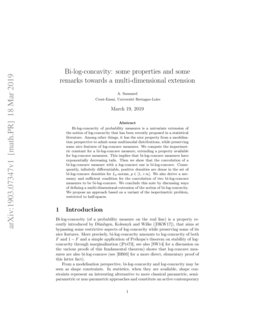 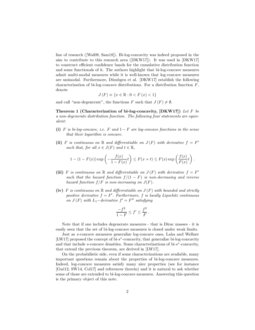 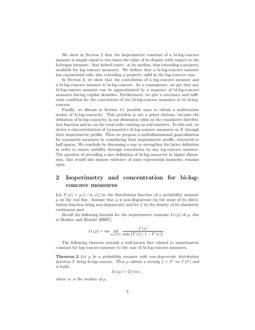 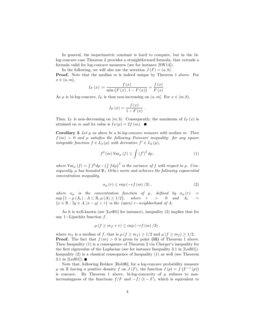 Inequalities between L^p-norms for log-concave distributions

In this note, we show that the convolution of a discrete symmetric log-c...
Charles Arnal, et al. ∙

In this paper, we investigate the problem of computing Bayesian estimato...
Sébastien Gadat, et al. ∙

Bi-log-concavity (of a probability measure on the real line) is a property recently introduced by Dümbgen, Kolesnyk and Wilke ([DKW17]), that aims at bypassing some restrictive aspects of log-concavity while preserving some of its nice features. More precisely, bi-log-concavity amounts to log-concavity of both F and 1−F and a simple application of Prékopa’s theorem on stability of log-concavity through marginalization ([Pré73], see also [SW14] for a discussion on the various proofs of this fundamental theorem) shows that log-concave measures are also bi-log-concave (see [BB05] for a more direct, elementary proof of this latter fact).

and call “non-degenerate”, the functions F such that J(F)≠∅.

Let F be a non-degenerate distribution function. The following four statements are equivalent:

F is bi-log-concave, i.e. F and 1−F are log-concave functions in the sense that their logarithm is concave.

Note that if one includes degenerate measures - that is Dirac masses - it is easily seen that the set of bi-log-concave measures is closed under weak limits.

Finally, we discuss in Section 3.1 possible ways to obtain a multivariate notion of bi-log-concavity. This problem is not a priori obvious, because the definition of bi-log-concavity in one dimension relies on the cumulative distribution function and so, on the total order existing on real numbers. To this end, we derive a characterization of (symmetric) bi-log-concave measures on R

through their isoperimetric profile. Then we propose a multidimensional generalization for symmetric measures by considering their isoperimetric profile, restricted to half spaces. We conclude by discussing a way to strengthen the latter definition in order to ensure stability through convolution by any log-concave measure. The question of providing a nice definition of bi-log-concavity in higher dimension, that would also impose existence of some exponential moments, remains open.

Recall the following formula for the isoperimetric constant Is(μ) of μ, due to Bobkov and Houdré [BH97],

Let μ be a probability measure with non-degenerate distribution function F being bi-log-concave. Then μ admits a density f=F′ on J(F) and it holds

where m is the median of μ.

In general, the isoperimetric constant is hard to compute, but in the bi-log-concave case Theorem 2 provides a straightforward formula, that extends a formula valid for log-concave measures (see for instance [SW14]).

In the following, we will also use the notation J(F)=(a,b).

Proof. Note that the median m is indeed unique by Theorem 1 above. For x∈(a,m],

Thus, IF is non-decreasing on [m,b). Consequently, the maximum of IF(x) is attained on m and its value is Is(μ)=2f(m).

Let μ as above be a bi-log-concave measure with median m. Then f(m)>0 and μ satisfies the following Poincaré inequality: for any square integrable function f∈L2(μ) with derivative f′∈L2(μ),

is the variance of

As it is well-known (see [Led01] for instance), inequality (2) implies that for any 1−Lipschitz function f,

Proof. The fact that f(m)>0 is given by point (iii) of Theorem 1 above. Then Inequality (1) is a consequence of Theorem 2

via Cheeger’s inequality for the first eigenvalue of the Laplacian (see for instance Inequality 3.1 in

FX and FY that are bi-log-concave. Hence X and Y have densities, denoted by fX and fY. Then

Proof. By using formulas (3) and (4), this is a direct application of Prékopa’s theorem ([Pré73]) on the marginal of a log-concave function.

Take a (non-degenerate) bi-log-concave measure on R, with density f. Then there exists a sequence of infinitely differentiable bi-log-concave densities, positive on R, that converge to f in Lp(Leb), for any p∈[1,+∞].

Corollary 6 is also an extension of an approximation result available in the set of log-concave distributions, see [SW14, Section 5.2].

Proof. It suffices to consider the convolution of f with a sequence of centered Gaussian densities with variances converging to zero. As f has an exponential moment, it belongs to any Lp(Leb), p∈[1,+∞]. Then a simple application of classical theorems about convolution in Lp (see for instance [Rud87, p. 148]) allows to check that the approximations converge to f in any Lp(Leb), p∈[1,+∞].

More generally, the following theorem gives a necessary and sufficient condition for the convolution of two bi-log-concave measures to be bi-log-concave.

Then X+Y is bi-log-concave if and only if for any x∈J(FX+Y),

Of course, a simple symmetrization argument shows that conditions (5) and (6) are satisfied if (−logfY)′′≥0 pointwise, which means that fY is log-concave, in which case we recover Proposition 5 above. But Theorem 7 is more general. Indeed, it is easily checked by direct computations that the convolution the Gaussian mixture 2−1N(−1.34,1)+2−1N(1.34,1) - which is bi-log-concave but not log-concave, see [DKW17, Section 2] - with itself is bi-log-concave.

To prove Theorem 7, we will use the following lemma.

Proof of Lemma 8. This a simple integration by parts: from the assumptions, we have

Proof of Theorem 7. Recall that we have

Our first goal is to find some conditions such that FX+Y is log-concave. It is sufficient to prove that, for any x∈J(FX+Y),

Gathering the equations, we get

which gives condition (5). Likewise condition (6) arises from the same type of computations when studying log-concavity of (1−FX+Y).

3.1 Towards a multivariate notion of bi-log-concavity

Let us introduce this section with the following remark. The isoperimetric profile Iμ is defined as follows: for any p∈(0,1),

where μ+(A)=liminfh→0+(μ(Ah)−μ(A))/h, with Ah={x∈R:δ(x,A)<h}. Note that the isoperimetric profile Iμ depends on the distance δ that is considered. Unless explicitly mentioned, we will consider in the following that the distance δ is the Euclidean distance. From inequality (2.1) in [Bob96], we have for a log-concave measure μ on R and any h>0,

For a general measure μ, we define the isoperimetric profile restricted to half-spaces IHμ: for any p∈(0,1),

For a measure μ on R having a density f, one has

Furthermore, as previously remarked, Iμ≡IHμ in the one-dimensional log-concave case. The latter identity is still true in higher dimension for the Gaussian measure when the distance is given by the Euclidean norm (see [Bor75]) and this characterizes Gaussian measures. In general, it also holds Iμ≤IHμ pointwise.

Take the distance δ to be given by the sup-norm, δ(x,y)=∥x−y∥∞. Then, for any set A⊂R, we have Ah=A+h[−1,1]n. In this case, Bobkov [Bob96, Theorem 1.1] characterizes symmetric log-concave measures for which IHμ=Iμ.

Reverse relation in higher dimension between Iμ and IHμ when μ

is log-concave, is related to the so-called KLS-hyperplane conjecture (see for instance

A possible extension of the notion of bi-log-concavity is the following.

Let μ be a probability measure on Rd, d≥1. Assume that μ is symmetric around the origin. Then μ is said to be weakly bi-log-concave (with respect to the distance δ) if the function

Symmetric log-concave measures on Rd are bi-log-concave (for the Euclidean distance).

a unit vector and consider the measure

μu defined to be the projection of the measure μ on the line containing 0 and directed by u. Consequently, μu is a log-concave measure on R, symmetric around zero. Hence Iμu(p) is concave and consequently, Iμu(p)/p is nonincreasing. Since half-spaces are parameterized by unitary vectors together with a point on the line containing zero and directed by the considered unitary vector, this readily gives the nonincreasingness of Iμ(p)/p.

One can notice that the latter proof is in fact only based on stability of log-concavity through one-dimensional marginalizations. This naturally leads to the following second definition of bi-log-concavity in higher dimension.

Let μ be a probability measure on Rd, d≥1. Then μ is said to be weakly−∗ bi-log-concave if for every line ℓ⊂Rd, the (Euclidean) projection measure μℓ of μ onto the line ℓ is a (one-dimensional) bi-log-concave measure on ℓ (that can be possibly degenerate). More explicitly, for any x∈ℓ and any Borel set B⊂R,

where u is a unit directional vector of the line ℓ.

Proof. By parametrization of half-spaces, we have the following formula, for any p∈(0,1),

Then the conclusion follows by noticing that for any line ℓ such that 0∈ℓ, the projection measure μℓ of μ is symmetric and bi-log-concave. Hence, IHμℓ(p)/p is non-increasing on (0,1) and so is IHμ(p)/p.

The following result states that the notion of weakly−∗ bi-log-concavity is stable through convolution by log-concave measures.

As for the log-concave case, it is moreover directly seen that weakly and weakly−∗ log-concavity are stable by affine transformations of the space.

Actually, in addition to containing log-concave measures and being stable through convolution by a log-concave measure, there are at least two other properties that one would naturally require for a convenient multidimensional concept of bi-log-concavity: existence of a density with respect to the Lebesgue measure on the convex hull of its support and existence of a finite exponential moment for the (Euclidean) norm. We can express this latter remark through the following open problem, that concludes this note.

Open Problem: Find a nice characterization of probability measures on Rd that are weakly−∗ bi-log-concave, that admit a density with respect to the Lebesgue measure on the convex hull of their support and whose Euclidean norm has exponentially decreasing tails.

I express my deepest gratitude to Jon Wellner, who introduced me to the intriguing notion of bi-log-concavity and who provided several numerical computations during his visit at the Crest-Ensai, that helped to understand the convolution problem for bi-log-concave measures. Many thanks also to Jon for his comments on a previous version of this note.