Classification of posts in social media such as Twitter is difficult due to the noisy and short nature of texts. Sequence classification models based on recurrent neural networks (RNN) are popular for classifying posts that are sequential in nature. RNNs assume the hidden representation dynamics to evolve in a discrete manner and do not consider the exact time of the posting. In this work, we propose to use recurrent neural ordinary differential equations (RNODE) for social media post classification which consider the time of posting and allow the computation of hidden representation to evolve in a time-sensitive continuous manner. In addition, we propose a novel model, Bi-directional RNODE (Bi-RNODE), which can consider the information flow in both the forward and backward directions of posting times to predict the post label. Our experiments demonstrate that RNODE and Bi-RNODE are effective for the problem of stance classification of rumours in social media. 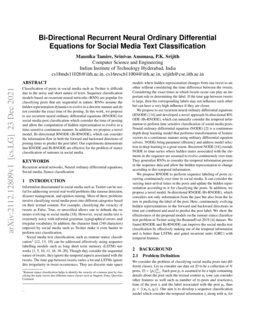 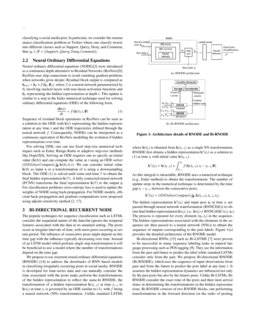 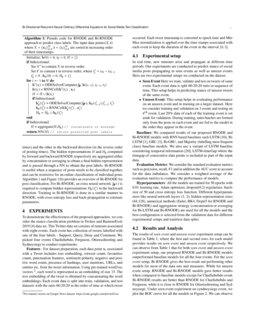 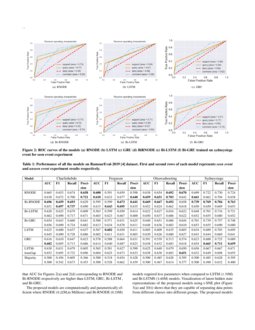 Sentiment analysis has been an active area of research in the past two d...
Sainik Kumar Mahata, et al. ∙

Sub-event detection from Twitter streams as a sequence labeling problem

Social media has been developing rapidly in public due to its nature of ...
Tian Bian, et al. ∙

Information disseminated in social media such as Twitter can be useful for addressing several real-world problems like rumour detection, disaster management, and opinion mining. Most of these problems involve classifying social media posts into different categories based on their textual content. For example, classifying the veracity of tweets as False, True, or unverified allows one to debunk the rumours evolving in social media (Zubiaga et al., 2018a). However, social media text is extremely noisy with informal grammar, typographical errors, and irregular vocabulary. In addition, the character limit (240 characters) imposed by social media such as Twitter make it even harder to perform text classification.

(Zubiaga et al., 2016; Augenstein et al., 2016; Kochkina et al., 2017; Zubiaga et al., 2018b, a; Dey et al., 2018; Liu et al., 2019; Tian et al., 2020). Though they consider the sequential nature of tweets, they ignore the temporal aspects associated with the tweets. The time gap between tweets varies a lot and LSTMs ignore this irregularity in tweet occurrences. They are discrete state space models where hidden representation changes from one tweet to another without considering the time difference between the tweets. Considering the exact times at which tweets occur can play an important role in determining the label. If the time gap between tweets is large, then the corresponding labels may not influence each other but can have a very high influence if they are closer.

We propose RNODE to perform sequence labeling of posts occurring continuously over time in social media. It can consider the varying inter-arrival times in the posts and update the hidden representation according to it for classifying the posts. In addition, we propose a novel model, bi-directional RNODE (Bi-RNODE), which considers not only information from the past but also from the future in predicting the label of the post. Here, continuously evolving hidden representations in the forward and backward directions in time are combined and used to predict the post label. We show the effectiveness of the proposed models on the rumour stance classification problem in Twitter using the RumourEval-2019 (Derczynski et al., 2019)

dataset. We found RNODE and Bi-RNODE can improve the social media text classification by effectively making use of the temporal information and is better than LSTMs and gated recurrent units (GRU) with temporal features.

We consider the problem of classifying social media posts into different classes. Let us consider our data set D to be a collection of N posts, D={pi}Ni=1. Each post pi is assumed to be a tuple containing details about the post such the textual content xi (one can consider other features as well such as number of re-posts and reactions), time of the post ti and the label associated with the post yi, thus pi={(xi,ti,yi)}. Our aim is to develop a sequence classification model which consider the temporal information ti along with xi for classifying a social media post. In particular, we consider the rumour stance classification problem in Twitter where one classify tweets into different classes such as Support, Query, Deny, and Comment, thus yi ∈ Y={Support,Query,Deny,Comment}.

ht+1=ht+f(ht,θt), where f is a neural network parameterized by θt

ht representing the hidden representation at depth t. This update is similar to a step in the Euler numerical technique used for solving ordinary differential equations (ODE) of the following form.

Sequence of residual block operations in ResNets can be seen as a solution to the ODE with h(t) representing the hidden representation at any time t and the ODE trajectories defined through the neural network f. Consequently, NODEs can be interpreted as a continuous equivalent of ResNets modelling the evolution if hidden representations over time.

For solving ODE, one can use fixed step-size numerical techniques such as Euler, Runge-Kutta or adaptive step-size methods like Dopri5(Dormand and Prince, 1980). Solving an ODE requires one to specify an initial value (h(0)) and can compute the value at t using an ODE solver ODESolverCompute(fθ,h(0),0,t). We can consider initial value h(0) as input x or a transformation of x using a downsampling block. The ODE (1) is solved until some end-time T to obtain the final hidden representation h(T). A fully connected neural network (FCNN) transforms the final representation h(T) to the output ^y. For classification problems cross-entropy loss is used to update the weights of NODE using back-propagation. For NODE models, efficient back-propagation and gradient computations were proposed using adjoint sensitivity method (Zhuang et al., 2020; Chen et al., 2018).

The popular techniques for sequence classification such as LSTMs consider the sequential nature of the data but ignores the temporal features associated with the data in its standard setting. The posts occur at irregular intervals of time, with more posts occurring at certain period. The influence of consecutive posts might depend on this time gap with the influence typically decreasing over time. Instead of an LSTM model which perform single step transformation it will be beneficial to use a model where the number of transformations depend on the time gap.

(Huang et al., 2015). They use the information from the past and future to predict the label while standard LSTMs consider only from the past. We propose Bi-directional RNODE (Bi-RNODE), which uses the sequence of input observations from past and from the future to predict the post label at any time t. It assumes the hidden representation dynamics are influenced not only by the past posts but also by the futures posts. Unlike Bi-LSTMs, Bi-RNODE consider the exact time of the posts and their inter-arrival times in determining the transformations in the hidden representations. Bi-RNODE consists of two RNODE blocks, one performing transformations in the forward direction (in the order of posting times) and the other in the backward direction (in the reverse order of posting times). The hidden representations H and Hb computed by forward and backward RNODE respectively are aggregated either by concatenation or averaging to obtain a final hidden representation and is passed through a NN to obtain the post labels. Bi-RNODE is useful when a sequence of posts needs to be classified together, and can be restrictive for an online classification of individual posts. Algorithm 1 and Figure 1(b) provides an overview of Bi-RNODE for post classification. For Bi-RNODE, an extra neural network fθ′() is required to compute hidden representations Hb(t′i)

in the backward direction. Training in Bi-RNODE is done in a similar manner to RNODE, with cross-entropy loss and back-propagation to estimate parameters.

To demonstrate the effectiveness of the proposed approaches, we consider the stance classification problem in Twitter and RumourEval-2019 (Derczynski et al., 2019) data set. This Twitter data set consists of rumours associated with eight events. Each event has collection of tweets labelled with one of the four labels - Support, Query, Deny and Comment. We picked four events Charliehebdo, Ferguson, Ottawashooting and Sydneysiege to conduct experiments.

, each word is represented as an embedding of size 15. The text embedding of the tweet is obtained by concatenating the word embeddings. Each event data is split into train, validation, and test datasets with the ratio 60:20:20 in the order of time at which tweet occurred. Each tweet timestamp is converted to epoch time and Min-Max normalization is applied over the time stamps associated with each event to keep the duration of the event in the interval

In real time, new rumours arise and propagate at different time periods. Our experiments are conducted to predict stance of social media posts propagating in seen events as well as unseen events. Here are two experimental setups we conducted on the dataset.

Baselines: We compared results of our proposed RNODE and Bi-RNODE models with RNN based baselines such LSTM (Kochkina et al., 2017), Bi-LSTM (Augenstein et al., 2016), GRU (Cho et al., 2014), Bi-GRU, and Majority (labelling most frequent class) baseline models. We also use a variant of LSTM baseline considering temporal information (Zubiaga et al., 2018b), LSTM-timeGap where the timegap of consecutive data points is included as part of the input data.

: All the models are trained for 50 epochs with 0.01 learning rate, Adam optimizer, dropout(0.2) regularizer, batchsize of 50 and cross entropy loss function. Different hyperparameters like neural network layers (1, 2), hidden representation sizes (64,128), numerical methods (Euler, RK4, Dopri5 for RNODE and Bi-RNODE) and aggregation strategy (concatenation or averaging for Bi-LSTM and Bi-RNODE) are used for all the models and the best configuration is selected from the validation data for different experimental setups and train/test data splits.

We proposed RNODE and Bi-RNODE models for sequence classification of social media posts which naturally consider the temporal information and use it to model the dynamics of hidden representations using an ODE. This makes them more effective than LSTMs for social media where posts occur at irregular time intervals. The experimental results on the rumour stance classification problem in Twitter supports the superior capability of the RNODE and Bi-RNODE in performing tweet classification. As a future work, we would like to further improve the sequence modelling capability of the proposed models by combining them with conditional random fields.