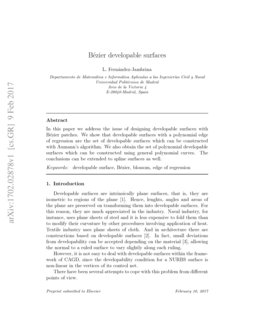 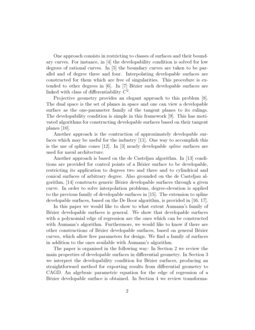 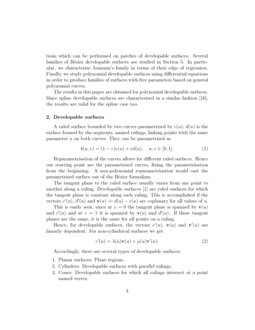 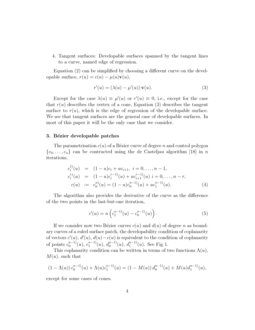 In this paper we provide a characterisation of rational developable surf...
Leonardo Fernandez-Jambrina, et al. ∙

This paper is devoted to the construction of polynomial 2-surfaces which...
Michal Bizzarri, et al. ∙

In this note we detail a framework to systematically derive polynomial b...
Markus Bachmayr, et al. ∙

The purpose of this paper is to present simple and fast methods for comp...
Jean Gallier, et al. ∙

We introduce the notion of tropical defects, certificates that a system ...
Paul Görlach, et al. ∙

Developable surfaces are intrinsically plane surfaces, that is, they are isometric to regions of the plane struik . Hence, lenghts, angles and areas of the plane are preserved on transforming them into developable surfaces. For this reason, they are much appreciated in the industry. Naval industry, for instance, uses plane sheets of steel and it is less expensive to fold them than to modify their curvature by other procedures involving application of heat. Textile industry uses plane sheets of cloth. And in architecture there are constructions based on developable surfaces architecture . In fact, small deviations from developability can be accepted depending on the material arribas , allowing the normal to a ruled surface to vary slightly along each ruling.

However, it is not easy to deal with developable surfaces within the framework of CAGD, since the developability condition for a NURBS surface is non-linear in the vertices of its control net.

There have been several attempts to cope with this problem from different points of view.

One approach consists in restricting to classes of surfaces and their boundary curves. For instance, in lang the developability condition is solved for low degrees of rational curves. In aumann0

the boundary curves are taken to be parallel and of degree three and four. Interpolating developable surfaces are constructed for them which are free of singularities. This procedure is extended to other degrees in

frey . In maekawa Bézier such developable surfaces are linked with class of differentiability C2.

Projective geometry provides an elegant approach to this problem ravani . The dual space is the set of planes in space and one can view a developable surface as the one-parameter family of the tangent planes to its rulings. The developability condition is simple in this framework pottmann-farin . This has motivated algorithms for constructing developable surfaces based on their tangent planes wallner .

Another approach is the contruction of approximately developable surfaces which may be useful for the industry chalfant . One way to accomplish this is the use of spline cones leopoldseder . In arribas nearly developable spline surfaces are used for naval architecture.

A ruled surface bounded by two curves parametrised by c(u), d(u) is the surface formed by the segments, named rulings, linking points with the same parameter u on both curves. They can be parametrised as

The tangent plane to the ruled surface usually varies from one point to another along a ruling. Developable surfaces struik

are ruled surfaces for which the tangent plane is constant along each ruling. This is accomplished if the vectors

Hence, for developable surfaces, the vectors c′(u), v(u) and v′(u) are linearly dependent. For non-cylindrical surfaces we get

Accordingly, there are several types of developable surfaces:

Equation (2) can be simplified by choosing a different curve on the developable surface, r(u)=c(u)−μ(u)v(u),

Except for the case λ(u)≡μ′(u) or r′(u)≡0, i.e., except for the case that r(u) describes the vertex of a cone, Equation (3) describes the tangent surface to r(u), which is the edge of regression of the developable surface. We see that tangent surfaces are the general case of developable surfaces. In most of this paper it will be the only case that we consider.

The parametrisation c(u) of a Bézier curve of degree n and control polygon {c0,…,cn} can be contructed using the de Casteljau algorithm farin in n iterations,

The algorithm also provides the derivative of the curve as the difference of the two points in the last-but-one iteration,

This coplanarity condition can be written in terms of two functions Λ(u), M(u), such that

except for some cases of cones.

The use of blossoms

to write the last-but-one vertices of the de Casteljau algorithm,

allow a simpler expression for the coplanarity condition leonardo-triangle :

Two Bézier curves c(u), d(u) of degree n and vertices {c0,…,cn}, {d0,…,dn} are the boundary curves of a generic developable surface patch if and only if their respective blossoms are related by

This construction of developable surfaces has nice features, which are based on the use of blossoms. Algorithms grounded on blossoms are compatible with this construction.

These functions Λ(u), M(u) are closely related to the ones in (2). If we write that equation in terms of blossoms for curves of degree n,

and using the de Casteljau algorithm (3) for expanding the expressions for c(u) and d(u), we may collect the terms,

so that we may simplify the blossoms using affine combinations,

If we compare this expression with Theorem 1, we get:

In this sense we may view Theorem 1 as a way of writing the differential equation (2) for polynomial curves in an algebraic fashion. This provides an interpretation for Λ(u), M(u) and it is useful to exchange results between the general and the polynomial case.

We may also characterise the edge of regression of a Bézier developable surface in terms of the functions Λ(u), M(u).

The edge of regression of a developable surface is formed by the set of points where the surface is singular, two-sheeted more precisely, as we see in Fig. 2. It is therefore of great importance for design to keep it under control in order to produce smooth surfaces.

We may locate it by searching the points where the parametrisation b(u,v) of the developable surface is degenerate because its partial derivatives are parallel,

parallelism between these two vectors implies the existence of a factor α(u,v) such that αnbv=bu,

On the other hand the developability condition imposes another barycentric combination,

which allows us to read the unknown α

and write down the parametric equations for the edge of regression:

A developable surface parametrised by b(u,v)=(1−v)c(u)+vd(u) where c(u), d(u) are polynomial curves of degree n with blossoms related by c[u<n−1>,Λ(u)]=d[u<n−1>,M(u)] for some functions Λ, M has as edge of regression the line given by the parametric equation

This is interesting, since it allows control of the position of the edge of regression in order to keep our patch away from it, preventing the rulings from intersecting it and ruining the surface patch.

In the constant case aumann it implies that the edge of regression is a line of degree n+1 on the developable surface, unless Λ equals M.

The equation for the edge of regression is algebraic and simple enough to simplify the task of avoiding this singular line when designing with developable surfaces.

There are a number of simple operations that we may perform on developable surfaces in order to modify the coordinate patch:

The simplest example of developable surfaces are cylinders, for which all the rulings are parallel to a constant vector v.

the property of multi-affinity allows writing it in a compact fashion,

Constructing a cylinder with direction v is easy, d(u)=c(u)+f(u)v, where f(u) can be any function. If we require the parametrisation to be polynomial of degree n in u, f(u) is a polynomial of degree equal or lower than n. We may relate f(u) with the function Λ(u) defining the developable surface. Comparing

we learn that the polar form of f is to fullfil

For f(u)=n∑i=0aiui, the previous condition on the polarisation of f reads

from which we can read the expression for Λ(u),

The simplest cone patch is the one bounded by a curve c(u) with vertex at a point V. The rulings have v(u)=c(u)−V as tangent vector, but we can construct more general patches using v(u)=(c(u)−V)f(u), for which

If c(u) is a curve of degree n, c(u)−V is also of degree n and except for constant f, modification of the patch implies raising its degree,

The simple case of constant f, for which d(u) is a scaled copy of c(u) is out of this framework.

We start with the simple case of the tangent surface to a curve c(u) of degree n,

This is the simple case that has been explored in aumann and extended to spline surfaces in leonardo-developable . This family has the remarkable property of having linear constraints between the vertices of the cells of the control net for the surface. If {c0,…,cn}, {d0,…,dn} are the control polygons for curves c(u) and d(u), Theorem 1

implies we have a set of n conditions,

which require that the cells of the surface are planar and that the coefficients for the combinations of the vertices are the same for all cells (See Fig. 9 for an example).

The general solution to the linear differential equation (2) for these developable surfaces,

can be split into the general solution to the homogeneous equation

where w is an arbitrary constant vector,

and a particular solution of the whole inhomogeneous equation, vp(u), which we may choose of degree lower than n. Hence, the general case is that of v of degree n, except for the specific case with w=0.

The edge of regression for such developable surfaces,

is a polynomial curve with velocity

In order to explain this issue, we show next that the tangent surface to a polynomial curve of degree n+1 can always be parametrised as a surface patch of degree (n,1):

We start then with the tangent surface to a curve r(u) of degree n+1 and define a surface patch on it, limited by two curves,

so that we do not change the degree of the generator of the rulings,

From the differential equation governing this patch,

we may read the coefficients λ, μ,

and hence the functions for the discrete version of it,

considering that c(u) and d(u) are formally of degree n+1.

which corresponds to a surface patch bounded by two curves c(u), d(u) of degree n and constant functions

Hence we have proven that any tangent surface to a polynomial curve of degree n+1 can be put in the form of a surface patch of degree (n,1) with constant values of Λ, M.

Since, on the other hand, developable patches with constant Λ, M have polynomial edges of regression, we have:

The set of developable surfaces with patches generated by two curves c(u), d(u) of degree n, with ruling generators v(u)=d(u)−c(u) also of degree n and blossoms related by

with constant Λ, M is the set of tangent surfaces to polynomial curves of degree n+1.

That is, Aumann’s algorithm allows construction of every developable surface with polynomial edge of regression (See Fig. 10).

Besides the previous case, there are other patches with constant functions Λ, M, but these are of degree (n+1,1).

This is a degenerated case for which c(u), d(u) are of degree n+1 whereas v(u) is of degree <span class="mjx-char MJXc-TeX-math