Presented paper describes the method for finding the intersection of class space rational Bezier curves. The problem curve/curve intersection belongs among basic geometric problems and the aim of this article is to describe the new technique to solve the problem using relief perspective and Bezier clipping. 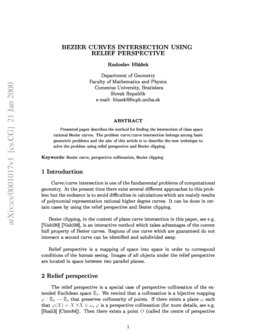 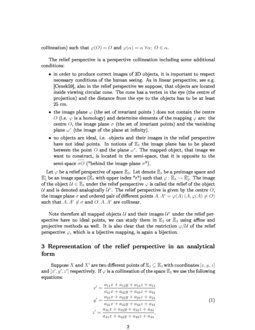 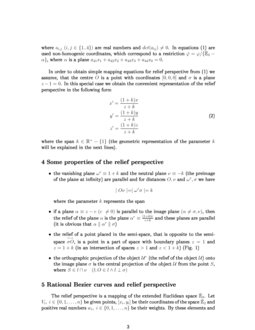 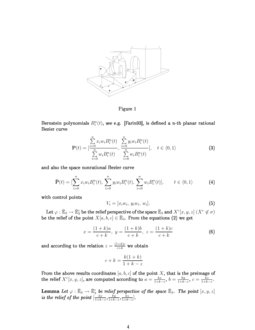 Curve/curve intersection is one of the fundamental problems of computational geometry. At the present time there exist several different approaches to this problem but the endeavor is to avoid difficulties in calculations which are mainly results of polynomial representation rational higher degree curves. It can be done in certain cases by using the relief perspective and Bezier clipping.

Bezier clipping, in the context of plane curve intersection in this paper, see e.g. [Nishi90] [Nishi98], is an interactive method which takes advantages of the convex hull property of Bezier curves. Regions of one curve which are guaranteed do not intersect a second curve can be identified and subdivided away.

Relief perspective is a mapping of space into space in order to correspond conditions of the human seeing. Images of all objects under the relief perspective are located in space between two parallel planes.

The relief perspective is a perspective collineation including some additional conditions:

and ordered pair of different points

3 Representation of the relief perspective in an analytical form

Suppose X and X′ are two different points of E3⊆¯E3 with coordinates [x,y,z] and [x′,y′,z′] respectively. If φ is a collineation of the space ¯E3 we use the following equations:

where the span k∈R+−{1} (the geometric representation of the parameter k will be explained in the next lines).

4 Some properties of the relief perspective

The relief perspective is a mapping of the extended Euclidean space ¯E3. Let Vi, i∈{0,1,…,n} be given points, [xi,yi] be their coordinates of the space ¯E2 and positive real numbers wi, i∈{0,1,…,n} be their weights. By these elements and Bernstein polynomials Bni(t), see e.g. [Farin93], is defined a n-th planar rational Bezier curve

By given planar points Vi and their weights wi, where 1+k>wi ∀i, we can define in ¯E3 points

With respect to the lemma above it is obvious, that the reliefs of the points Wi are represented by the points (5). Using the points Vi, the space nonrational Bezier curve ¯P(t) of the form (4) is defined and we notice, that ¯P(t) under mapping φ is an image of the curve

This curve Q(t) is the space rational Bezier curve defined by control points of the form (7) and their weights Ωi, that are computed according to Ωi=1+k−wi because of

Applying all these results we obtain the following theorem Theorem The curve ¯P(t) is a relief of the curve Q(t).

In order to get more information about Bezier curves and the relief perspective, let us assume having a central projection with the centre O[0,0,0] and the plane z−1=0. In this case the planar rational curve P(t) of the form (3) is the image of the space rational Bezier curve Q(t) defined by (8).

Let the space nonrational Bezier curve ¯P(t) expressed by (4) be given. What is the relief of this curve? We know z+k=n∑i=0(wi+k)Bni(t) and now the relief ¯Pr(t) of the given curve Pr(t) can be written as

t∈⟨0,1⟩,  where control vertices are points expressed as follow

Let P(t), Q(u) be space rational Bezier curves of the form (8). The aim is to find their intersection.

The central projections of these nonrational curves from the point [0,0,0] onto the plane z−1=0 are planar rational Bezier curves defined by (3). Their intersection is possible to find specifically by using the method of Bezier clipping. This method specifies values of the parameter t∈⟨0,1⟩ of the curve Ps(t), respectively the parameter u∈⟨0,1⟩ of the curve Qs(u), that correspond to the common point Rs (the upper indexes "r" and "s" denote the reliefs and central projections of curves or points). This point is the intersection of both curves . The preimage of the point Rs in the central projection is the space point, which is the relief of the intersection of the space rational Bezier curves P(t) and Q(u).

The following scheme shows a whole proces of finding the intersection of the P(t) and Q(u) curves:

The central projection ψ is not a bijective mapping and in case that the intersection of curves Ps(t) and Qs(u) exists (in opposite case the given curves P(t) and Q(u) certainly do not intersect) the intersection of curves P(t) and Q(u) does not have to exist. This situation occurs when preimages of point Rs on the curves Pr(t) and Qr(u) in the central projection are different.

The described method can be used as a direction for application how to find the intersection of the space rational curves of the form (8).  It is possible to express every polynomial curve in Bezier’s representation and due to this representation the method can be applied to all polynomial curves after modifications (e.g. spline curves which are considered as curves consist of Bezier segments) for solution to the curve/curve or curve/line intersection problems.

Despite the author’s attempt he did not succeed in finding similar comparable published methods on website. In addition to this he is not able to compare his results with any other. Obviously author’s knowledge is limited and he would appreciate to get information about any other similar method.

In the future work we want to extend possibilities of the relief perspective in geometric modeling. Our aim is to find an answer whether any polynomial 3D curve can be converted to the space curve of the form (8).

References 111some of the publications have not equivalents in English