Beyond the Channel Capacity of BPSK Input

The paper proposed a method that organizes a parallel transmission of two signals to be separated from each other at receiver through Hamming- to Euclidean space, where the conventional problem of achievable bit rate (ABR) is converted to that of the ABR's summation with respect to the two separated signals. Actually, the mutual information is separated accordingly into two. Since the mutual information is non-linear function of signal power in general, the separation brings a chance for achieving higher ABR. The proposed work proceeds along the above thinking and achieves higher bit-error-rate (BER) performance in comparison with BPSK as shown in the simulations. Moreover, one can find theoretically beyond of channel capacity of BPSK input. 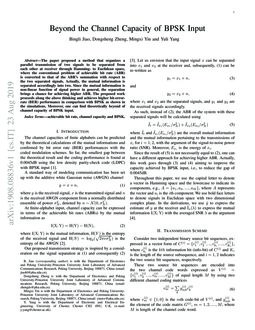 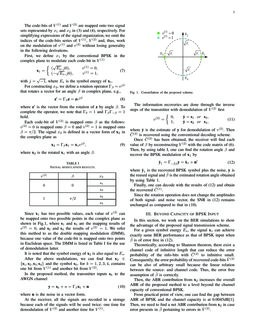 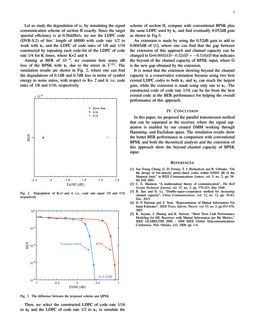 The field of the coded modulations witnessed its golden era as the simul...
Bingli Jiao, et al. ∙

In this paper, we propose a new signal organization method to work in th...
Bingli Jiao, et al. ∙

The channel capacities of finite alphabets can be predicted by the theoretical calculations of the mutual informations and confirmed by bit error rate (BER) performances with the coded modulation schemes. So far, the smallest gap between the theoretical result and the coding performance is found at 0.0045dB using the low density parity-check code (LDPC) with BPSK input [1].

where y is the received signal, x is the transmitted signal and n

At finite-alphabet input, channel capacity can be expressed in terms of the achievable bit rates (ABRs) by the mutual information as

Our proposed transmission strategy is inspired by a consideration on the signal separation at (1) and consequently (2) [3]. Let us envision that the input signal x can be separated into x1 and x2 at the receiver and, subsequently, (1) can be re-written as

where x1 and x2 are the separated signals, and y1 and y2 are the received signals accordingly.

As such, instead of (2), the ABR of the system with these separated signals will be calculated using

where ~It and ~Ixi(Exi/σ2N) are the overall mutual information and the mutual information pertaining to the transmissions of xi for i=1,2, with the argument of the signal-to-noise power ratio (SNR). Moreover, Exi is the energy of xi.

Since the result of (5) is not necessarily equal to (2), one can have a different approach for achieving higher ABR. Actually, this work goes through (3) and (4) aiming to improve the capacity achieved by BPSK input, i.e., to reduce the gap of 0.0045dB.

Throughout this paper, we use the capital letter to denote a vector in Hamming space and the lowercase to indicate its components, e.g.,

A={a1,a2,....,aM}, where A represents the vector and ai is the ith component. We use bold face letters to denote signals in Euclidean space with two dimensional complex plane. In the derivations, we use ^y

to express the estimate of

y at the receiver and ~Ix(λ) to express the mutual information I(X;Y) with the averaged SNR λ as the argument [4].

Consider two independent binary source bit sequences, expressed in a vector form of C(i)={c(i)1,c(i)2,..,c(i)ki,...,c(i)Ki}, where c(i)ki is the kth information bit (info-bit) of C(i) and Ki is the length of the source subsequence, and i=1,2 indicates the two source bit sequences, respectively.

The code-bits of V(1) and V(2) are mapped onto two signal sets represented by x1 and x2 in (3) and (4), respectively. For simplifying expressions of the signal organization, we omit the indices of the code-bits series of V(1), V(2) and, thus, work on the modulation of v(1) and v(2) without losing generality in the following derivations.

First, we define x1 by the conventional BPSK in the complex plane to modulate each code-bit in V(1)

For constructing x2, we define a rotation operator Γβ=ejβ that rotates a vector for an angle β in complex plane, e.g.,

where z′ is the vector from the rotation of z by angle β. To complete the operator, we note that Γ0=1 and ΓβΓ−β=1 hold.

where x2 is the rotated x1 with an angle β.

Since x1 has two possible values, each value of v(2) can be mapped onto two possible points in the complex plane as shown in Fig.1, where s1 and s3 are the mapping results of v(2)=0, and s2 and s4 the results of v(2)=1. We refer this method to as the double mapping modulation (DMM), because one value of the code-bit is mapped onto two points in Euclidean space. The DMM is listed in Table I for the use of demodulation latter.

It is noted that the symbol energy of x2 is also equal to Es.

In the proposed method, the transmitter inputs sk to the AWGN channel

where n is the noise in a vector form.

At the receiver, all the signals are recoded in a storage because each of the signals will be used twice: one time for demodulation of V(2) and another time for V(1).

where ^y is the estimate of y for demodulation of v(2). Then ^C(2) is recovered using the conventional decoding scheme.

Once ^C(2) has been obtained, the receiver will find each value of β by reconstructing V(2) with the code matrix of (6). Then, by using table I, one can find the rotation angle β and recover the BPSK modulation of x1 by

where ^y1 is the recovered BPSK symbol plus the noise, y is the reused signal and ^β is the estimated rotation angle obtained by using Table 1.

Finally, one can decode with the results of (12) and obtain the recovered ^C(1).

Since the rotation operation does not change the amplitudes of both signal- and noise vector, the SNR in (12) remains unchanged as compared to that in (10).

Iii Beyond Capacity of BPSK Input

In this section, we work on the BER simulations to show the advantage of the proposed signal transmission scheme.

For a given symbol energy Es, the signal x1 can achieve exactly same BER performance as that of BPSK input when ^β is of error free in (12).

Theoretically, according to Shannon theorem, there exist a channel code of infinitive length that can reduce the error probability of the info-bits with

^C(2) to infinitive small. Consequently, the error probability of recovered code-bits ^V(2) can be also of arbitrary small because the linear relation between the source- and channel code. Thus, the error free assumption of ^β is correctly.

Then, the ABR contribution from x2 increases the overall ABR of the proposed method to a level beyond the channel capacity of conventional BPSK.

From practical point of view, one can find the gap between ABR of BPSK and the channel capacity is at 0.0045dB[1]. Then, we need to find a net ABR contribution from x2 in case error presents in ^β pertaining to errors in ^V(2).

Let us study the degradation of x1 by simulating the signal communication scheme of section II exactly. Since the target spectral efficiency is at 0.5bit/Hz/s, we use the LDPC code (DVB-S.2) of bits’ length of 68000 with code rate 1/2 to work with x1 and the LDPC of code rates of 1/8 and 1/16 constructed by repeating each code-bit of the LDPC of code rate 1/4 for K times, where K=2 and 4.

An extension is made by using the 0.52dB gain to add to 0.0045dB of [1], where one can find that the gap between the extension of this approach and channel capacity can be changed to G=0.0045dB−0.52dB=−0.516dB that indicates the beyond of the channel capacity of BPSK input, where G is the new gap obtained by the extension.

It is noted that the extension showing beyond the channel capacity is a conservative estimation because using two best existed LDPC codes to both x1 and x2 can reach the largest gain, while the extension is made using only one to x1. The constructed code of code rate 1/16 can be far from the best existed code at the BER performance for helping the overall performance of this approach.

In this paper, we proposed the parallel transmission method that can be separated at the receiver, where the signal separation is enabled by our created DMM working through Hamming- and Euclidean space. The simulation results show the better BER performance in comparison with conventional BPSK and both the theoretical analysis and the extension of this approach show the beyond channel capacity of BPSK input.