Customer reviews are vital for making purchasing decisions in the Information Age. Such reviews can be automatically summarized to provide the user with an overview of opinions. In this tutorial, we present various aspects of opinion summarization that are useful for researchers and practitioners. First, we will introduce the task and major challenges. Then, we will present existing opinion summarization solutions, both pre-neural and neural. We will discuss how summarizers can be trained in the unsupervised, few-shot, and supervised regimes. Each regime has roots in different machine learning methods, such as auto-encoding, controllable text generation, and variational inference. Finally, we will discuss resources and evaluation methods and conclude with the future directions. This three-hour tutorial will provide a comprehensive overview over major advances in opinion summarization. The listeners will be well-equipped with the knowledge that is both useful for research and practical applications. 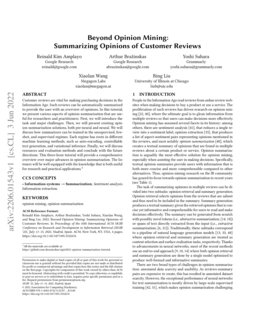 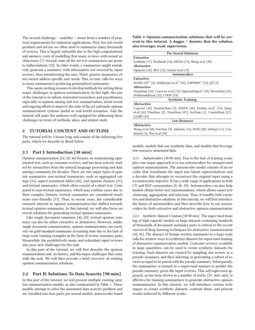 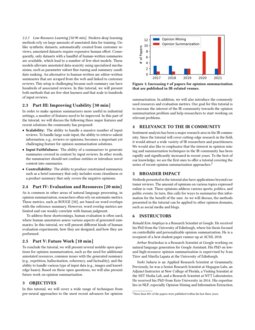 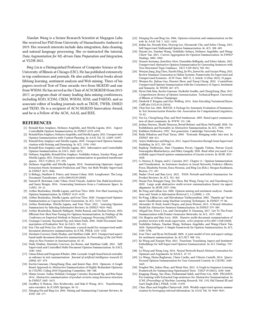 People in the Information Age read reviews from online review websites when making decisions to buy a product or use a service. The proliferation of such reviews has driven research on opinion mining (Hu and Liu, 2006; Pang and Lee, 2008), where the ultimate goal is to glean information from multiple reviews so that users can make decisions more effectively. Opinion mining has assumed several facets in its history: among others, there are sentiment analysis (Pang et al., 2002), that reduces a single review into a sentiment label, opinion extraction (Mukherjee and Liu, 2012), that produces a list of aspect-sentiment pairs representing opinions mentioned in the reviews, and most notably opinion summarization (Wang and Ling, 2016), which creates a textual summary of opinions that are found in multiple reviews about a certain product or service. Opinion summarization is arguably the most effective solution for opinion mining, especially when assisting the user in making decisions. Specifically, textual opinion summaries provide users with information that is both more concise and more comprehensible compared to other alternatives. Thus, opinion mining research on the IR community has geared its focus towards opinion summarization in recent years (see Table 1).

The task of summarizing opinions in multiple reviews can be divided into two subtasks: opinion retrieval and summary generation. Opinion retrieval selects opinions from the reviews that are salient and thus need to be included in the summary. Summary generation produces a textual summary given the retrieved opinions that is concise yet informative and comprehensible for users to read and make decisions effectively. The summary can be generated from scratch with possibly novel tokens (i.e., abstractive summarization; (Ganesan et al., 2010; Chu and Liu, 2019)) or spans of text directly extracted from the input (i.e., extractive summarization; (Hu and Liu, 2004; Angelidis and Lapata, 2018)). Traditionally, these subtasks correspond to a pipeline of natural language generation models (McKeown, 1992; Carenini et al., 2006; Wang and Ling, 2016)

where opinion retrieval and summary generation are treated as content selection and surface realization tasks, respectively. Thanks to advancements in neural networks, most of the recent methods use an end-to-end approach

(Chu and Liu, 2019; Bražinskas et al., 2020, 2020) where both opinion retrieval and summary generation are done by a single model optimized to produce well-formed and informative summaries.

There are two broad types of challenges in opinion summarization: annotated data scarcity and usability

. As reviews-summary pairs are expensive to create, this has resulted in annotated dataset scarcity. However, the exceptional performance of neural networks for text summarization is mostly driven by large-scale supervised training

(Rush et al., 2015; Zhang et al., 2020), which makes opinion summarization challenging. The second challenge – usability – stems from a number of practical requirements for industrial applications. First, for real-world products and service we often need to summarize many thousands of reviews. This is largely infeasible due to the high computational and memory costs of modelling that many reviews with neural architectures (Beltagy et al., 2020). Second, state-of-the-art text summarizers are prone to hallucinations (Maynez et al., 2020). In other words, a summarizer might mistakenly generate a summary with information not covered by input reviews, thus misinforming the user. Third, generic summaries often cannot address specific user needs. This, in turn, calls for ways to learn summarizers producing personalized summaries.

This opens exciting avenues to develop methods for solving these major challenges in opinion summarization. In this light, the aim of the tutorial is to inform interested researchers and practitioners, especially in opinion mining and text summarization, about recent and ongoing efforts to improve the state of the art and make opinion summarization systems useful in real-world scenarios. And the tutorial will make the audience well-equipped for addressing these challenges in terms of methods, ideas, and related work.

The tutorial will be 3 hours long and consist of the following five parts, which we describe in detail below.

focuses on summarizing opinionated text, such as customer reviews, and has been actively studied by researchers from the natural language processing and data mining community for decades. There are two major types of opinion summaries: non-textual summaries, such as aggregated ratings

Like single document summary (Rush et al., 2015; See et al., 2017), textual opinion summary can also be either extractive or abstractive. However, unlike single document summarization, opinion summarization can rarely rely on gold-standard summaries at training time due to the lack of large-scale training examples in the form of review-summary pairs. Meanwhile, the prohibitively many and redundant input reviews also pose new challenges for the task.

In this part of the tutorial, we will present multiple existing opinion summarization models, as also summarized in Table 1

. These models attempt to solve the annotated data scarcity problem and are classified into four parts: pre-neural models, autoencoder-based models, models that use synthetic data, and models that leverage low-resource annotated data.

Due to the lack of training examples, one major approach is to use autoencoders for unsupervised opinion summarization. The autoencoder model consists of an encoder that transforms the input into latent representations and a decoder that attempts to reconstruct the original input using a reconstruction objective. It has a wide range of applications in both CV and NLP communities (Hinton et al., 2011; Kingma and Welling, 2014; Bowman et al., 2016). Autoencoders can also help models obtain better text representations, which allows easier text clustering, aggregation, and selection. Thus, it benefits both extractive and abstractive solutions. In this tutorial, we will first introduce the basics of autoencoders and then describe how to use autoencoders for both extractive and abstractive opinion summarization.

(Rush et al., 2015; See et al., 2017). The absence of human-written summaries in a large-scale calls for creative ways to synthesize datasets for supervised training of abstractive summarization models. Customer reviews, available in large quantities, can be used to create synthetic datasets for training. Such datasets are created by sampling one review as a pseudo-summary, and then selecting or generating a subset of reviews as input to be paired with the pseudo-summary. Subsequently, the summarizer is trained in a supervised manner to predict the pseudo-summary given the input reviews. This self-supervised approach, as has been shown in a number of works [Zhang et al., 2020, inter alia], is effective for training summarizers to generate abstractive opinion summamaaries. In this tutorial, we will introduce various techniques to create synthetic datasets, contrast them, and present results achieved by different works.

Modern deep learning methods rely on large amounts of annotated data for training. Unlike synthetic datasets, automatically created from customer reviews, annotated datasets require expensive human effort. Consequently, only datasets with a handful of human-written summaries are available, which lead to a number of few-shot models. These models alleviate annotated data-scarcity using specialized mechanisms, such as parameter subset fine-tuning and summary candidate ranking. An alternative to human-written are editor-written summaries that are scraped from the web and linked to customer reviews. This setup is challenging because each summary can have hundreds of associated reviews. In this tutorial, we will present both methods that are few-shot learners and that scale to hundreds of input reviews.

In order to make opinion summarizers more useful in industrial settings, a number of features need to be improved. In this part of the tutorial, we will discuss the following three major features and recent solutions the community has proposed:

As is common in other areas of natural language processing, in opinion summarization, researchers often rely on automatic metrics. These metrics, such as ROUGE (Lin, 2004), are based on word overlaps with the reference summary. However, word overlap metrics are limited and can weakly correlate with human judgment.

To conclude the tutorial, we will present several notable open questions for opinion summarization, such as the need for additional annotated resources, common issues with the generated summary (e.g., repetition, hallucination, coherency, and factuality), and the ability to handle various type of input data (e.g., images and knowledge bases). Based on these open questions, we will also present future work on opinion summarization.

In this tutorial, we will cover a wide range of techniques from pre-neural approaches to the most recent advances for opinion summarization. In addition, we will also introduce the commonly used resources and evaluation metrics. Our goal for this tutorial is to increase the interest of the IR community towards the opinion summarization problem and help researchers to start working on relevant problems.

4. Relevance to the IR community

Sentiment analysis has been a major research area in the IR community. Since the tutorial will cover cutting-edge research in the field, it would attract a wide variety of IR researchers and practitioners. We would also like to emphasize that the interest in opinion mining and summarization techniques in the IR community has been rapidly and significantly increased in recent years. To the best of our knowledge, we are the first ones to offer a tutorial covering the series of recent opinion summarization approaches.222More than 80% of the papers were published within the last three years.

Methods presented in the tutorial also have applications beyond customer reviews. The amount of opinions on various topics expressed online is vast. These opinions address various sports, politics, and public events. In turn, this calls for ways to summarize this information for the benefit of the user. As we will discuss, the methods presented in the tutorial can be applied to other opinion domains, such as social media and blogs.

Reinald Kim Amplayo is a Research Scientist at Google. He received his PhD from the University of Edinburgh, where his thesis focused on controllable and personalizable opinion summarization. He is a recepient of a best student paper runner-up at ACML 2018.

Arthur Bražinskas is a Research Scientist at Google working on natural language generation for Google Assistant. His PhD on low- and high-resource opinion summarization is supervised by Ivan Titov and Mirella Lapata at the University of Edinburgh.

Xiaolan Wang is a Senior Research Scientist at Megagon Labs. She received her PhD from University of Massachusetts Amherst in 2019. Her research interests include data integration, data cleaning, and natural language processing. She co-instructed the tutorial, Data Augmentation for ML-driven Data Preparation and Integration, at VLDB 2021.

Bing Liu is a Distinguished Professor of Computer Science at the University of Illinois at Chicago (UIC). He has published extensively in top conferences and journals. He also authored four books about lifelong learning, sentiment analysis and Web mining. Three of his papers received Test-of-Time awards: two from SIGKDD and one from WSDM. He has served as the Chair of ACM SIGKDD from 2013-2017, as program chair of many leading data mining conferences, including KDD, ICDM, CIKM, WSDM, SDM, and PAKDD, and as associate editor of leading journals such as TKDE, TWEB, DMKD and TKDD. He is a recipient of ACM SIGKDD Innovation Award, and he is a Fellow of the ACM, AAAI, and IEEE.