Despite advances in open-domain dialogue systems, automatic evaluation of such systems is still a challenging problem. Traditional reference-based metrics such as BLEU are ineffective because there could be many valid responses for a given context that share no common words with reference responses. A recent work proposed Referenced metric and Unreferenced metric Blended Evaluation Routine (RUBER) to combine a learning-based metric, which predicts relatedness between a generated response and a given query, with reference-based metric; it showed high correlation with human judgments. In this paper, we explore using contextualized word embeddings to compute more accurate relatedness scores, thus better evaluation metrics. Experiments show that our evaluation metrics outperform RUBER, which is trained on static embeddings. 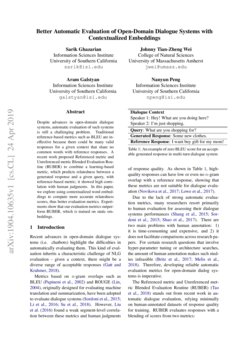 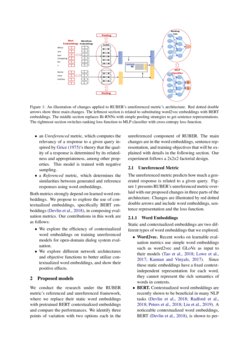 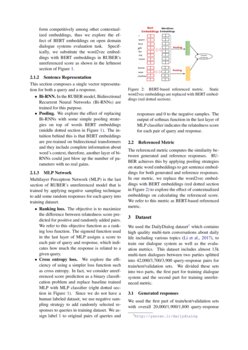 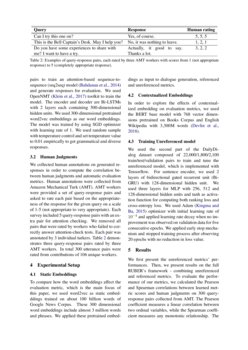 One "Ruler" for All Languages: Multi-Lingual Dialogue Evaluation with Adversarial Multi-Task Learning

Many automatic evaluation metrics have been proposed to score the overal...
Vitou Phy, et al. ∙

Recent advances in open-domain dialogue systems (i.e. chatbots) highlight the difficulties in automatically evaluating them. This kind of evaluation inherits a characteristic challenge of NLG evaluation - given a context, there might be a diverse range of acceptable responses Gatt and Krahmer (2018).

Metrics based on n-gram overlaps such as BLEU Papineni et al. (2002) and ROUGE Lin (2004), originally designed for evaluating machine translation and summarization, have been adopted to evaluate dialogue systems Sordoni et al. (2015); Li et al. (2016); Su et al. (2018). However, Liu et al. (2016) found a weak segment-level correlation between these metrics and human judgments of response quality. As shown in Table 1, high-quality responses can have low or even no n-gram overlap with a reference response, showing that these metrics are not suitable for dialogue evaluation Novikova et al. (2017); Lowe et al. (2017).

Both metrics strongly depend on learned word embeddings. We propose to explore the use of contextualized embeddings, specifically BERT embeddings Devlin et al. (2018), in composing evaluation metrics. Our contributions in this work are as follows:

We conduct the research under the RUBER metric’s referenced and unreferenced framework, where we replace their static word embeddings with pretrained BERT contextualized embeddings and compare the performances. We identify three points of variation with two options each in the unreferenced component of RUBER. The main changes are in the word embeddings, sentence representation, and training objectives that will be explained with details in the following section. Our experiment follows a 2x2x2 factorial design.

The unreferenced metric predicts how much a generated response is related to a given query. Figure 1 presents RUBER’s unreferenced metric overlaid with our proposed changes in three parts of the architecture. Changes are illustrated by red dotted double arrows and include word embeddings, sentence representation and the loss function.

Static and contextualized embeddings are two different types of word embeddings that we explored.

This section composes a single vector representation for both a query and a response.

Multilayer Perceptron Network (MLP) is the last section of RUBER’s unreferenced model that is trained by applying negative sampling technique to add some random responses for each query into training dataset.

We used the DailyDialog dataset111http://yanran.li/dailydialog which contains high quality multi-turn conversations about daily life including various topics Li et al. (2017), to train our dialogue system as well as the evaluation metrics. This dataset includes almost 13k multi-turn dialogues between two parties splitted into 42,000/3,700/3,900 query-response pairs for train/test/validation sets. We divided these sets into two parts, the first part for training dialogue system and the second part for training unreferneced metric.

We used the first part of train/test/validation sets with overall 20,000/1,900/1,800 query-response pairs to train an attention-based sequence-to-sequence (seq2seq) model Bahdanau et al. (2014) and generate responses for evaluation. We used OpenNMT Klein et al. (2017) toolkit to train the model. The encoder and decoder are Bi-LSTMs with 2 layers each containing 500-dimensional hidden units. We used 300-dimensional pretrained word2vec embeddings as our word embeddings. The model was trained by using SGD optimizer with learning rate of 1. We used random sample with temperature control and set temperature value to 0.01 empirically to get grammatical and diverse responses.

We collected human annotations on generated responses in order to compute the correlation between human judgments and automatic evaluation metrics. Human annotations were collected from Amazon Mechanical Turk (AMT). AMT workers were provided a set of query-response pairs and asked to rate each pair based on the appropriateness of the response for the given query on a scale of 1-5 (not appropriate to very appropriate). Each survey included 5 query-response pairs with an extra pair for attention checking. We removed all pairs that were rated by workers who failed to correctly answer attention-check tests. Each pair was annotated by 3 individual turkers. Table 2 demonstrates three query-response pairs rated by three AMT workers. In total 300 utterance pairs were rated from contributions of 106 unique workers.

To compare how the word embeddings affect the evaluation metric, which is the main focus of this paper, we used word2vec as static embedddings trained on about 100 billion words of Google News Corpus. These 300 dimensional word embeddings include almost 3 million words and phrases. We applied these pretrained embeddings as input to dialogue generation, referenced and unreferenced metrics.

In order to explore the effects of contextualized embedding on evaluation metrics, we used the BERT base model with 768 vector dimensions pretrained on Books Corpus and English Wikipedia with 3,300M words Devlin et al. (2018).

We used the second part of the DailyDialog dataset composed of 22,000/1,800/2,100 train/test/validation pairs to train and tune the unreferenced model, which is implemented with Tensorflow. For sentence encoder, we used 2 layers of bidirectional gated recurrent unit (Bi-GRU) with 128-dimensional hidden unit. We used three layers for MLP with 256, 512 and 128-dimensional hidden units and tanh as activation function for computing both ranking loss and cross-entropy loss. We used Adam

and applied learning rate decay when no improvement was observed on validation data for five consecutive epochs. We applied early stop mechanism and stopped training process after observing 20 epochs with no reduction in loss value.

We first present the unreferenced metrics’ performances. Then, we present results on the full RUBER’s framework - combining unreferenced and referenced metrics. To evaluate the performance of our metrics, we calculated the Pearson and Spearman correlations between learned metric scores and human judgments on 300 query-response pairs collected from AMT. The Pearson coefficient measures a linear correlation between two ordinal variables, while the Spearman coefficient measures any monotonic relationship. The third metric we used to evaluate our metric is cosine similarity, which computes how much the scores produced by learned metrics are similar to human scores.

Comparing different sentence encoding strategies (Bi-RNN v.s. Pooling) by keeping other variations constant, we observe that pooling of BERT embeddings yields better performance. This would be because of BERT embeddings are pretrained on deep bidirectional transformers and using pooling mechanisms is enough to assign rich representations to sentences. In contrast, the models based on word2vec embeddings benefit from Bi-RNN based sentence encoder. Across settings, max pooling always outperforms mean pooling. Regarding the choice of objective functions, ranking loss generally performs better for models based on word2vec embeddings, while the best model with BERT embeddings is obtained by using cross-entropy loss. We consider this as an interesting observation and leave further investigation for future research.

In comparison with purely unreferenced metrics (Table 3), correlations decreased across the board. This suggests that the addition of the referenced component is not beneficial, contradicting RUBER’s findings Tao et al. (2018). We hypothesize that this could be due to data and/or language differences, and leave further investigation for future work.

Due to the impressive development of open domain dialogue systems, existence of automatic evaluation metrics can be particularly desirable to easily compare the quality of several models.

In some group of language generation tasks such as machine translation and text summarization,

n-grams overlapping metrics have a high correlation with human evaluation. BLEU and METEOR are primarily used for evaluating the quality of translated sentence based on computing n

-gram precisions and harmonic mean of precision and recall, respectively

Papineni et al. (2002); Banerjee and Lavie (2005). ROUGE computes F-measure based on the longest common subsequence and is highly applicable for evaluating text summarization Lin (2004). The main drawback of mentioned n-gram overlap metrics, which makes them inapplicable in dialogue system evaluation is that they don’t consider the semantic similarity between sentences Liu et al. (2016); Novikova et al. (2017); Lowe et al. (2017). These word overlapping metrics are not compatible with the nature of language generation, which allows a concept to be appeared in different sentences with no common n-grams, while they all share the same meaning.

Beside the heuristic metrics, researchers recently tried to develop some trainable metrics for automatically checking the quality of generated responses. DBLP:conf/acl/LoweNSABP17 trained a hierarchical neural network model called Automatic Dialogue Evaluation Model (ADEM) to predict the appropriateness score of dialogue responses. For this purpose, they collected a training dataset by asking human about the informativeness score for various responses of a given context. However, ADEM predicts highly correlated scores with human judgments in both sentence and system level, collecting human annotation by itself is an effortful and laborious task.

DBLP:journals/corr/KannanV17 followed the GAN model’s structure and trained a discriminator that tries to discriminate the model’s generated response from human responses. Even though they found discriminator can be useful for automatic evaluation systems, they mentioned that it can not completely address the evaluation challenges in dialogue systems.

RUBER is another learnable metric, which considers both relevancy and similarity concepts for evaluation process Tao et al. (2018). Referenced metric of RUBER measures the similarity between vectors of generated and reference responses computed by pooling word embeddings, while unreferenced metric uses negative sampling to train the relevancy score of generated response to a given query. Despite ADEM score, which is trained on human annotated dataset, RUBER is not limited to any human annotation. In fact, training with negative samples makes RUBER to be more general. It is obvious that both referenced and unreferenced metrics are under the influence of word embeddings information. In this work, we show that contextualized embeddings that include much more information about words and their context can have good effects on the accuracy of evaluation metrics.

. In this paper, we show that beside positive effects of contexualized embeddings on many NLP tasks including question answering, sentiment analysis and semantic similarity, BERT embeddings also have the potential to help evaluate open domain dialogue systems closer to what would human do.

In the future, we plan to extend the work to evaluate multi-turn dialogue systems, as well as adding other aspects, such as creativity and novelty into consideration in our evaluation metrics.

We thank the anonymous reviewers for their constructive feedback, as well as the members of the PLUS lab for their useful discussion and feedback. This work is supported by Contract W911NF-15- 1-0543 with the US Defense Advanced Research Projects Agency (DARPA).