This note describes the details of our solution to the dense-captioning events in videos task of ActivityNet Challenge 2018. Specifically, we solve this problem with a two-stage way, i.e., first temporal event proposal and then sentence generation. For temporal event proposal, we directly leverage the three-stage workflow in [13, 16]. For sentence generation, we capitalize on LSTM-based captioning framework with temporal attention mechanism (dubbed as LSTM-T). Moreover, the input visual sequence to the LSTM-based video captioning model is comprised of RGB and optical flow images. At inference, we adopt a late fusion scheme to fuse the two LSTM-based captioning models for sentence generation. 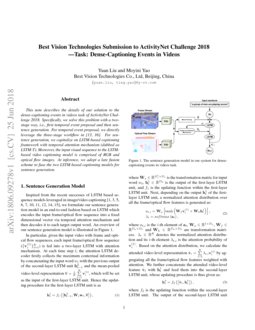 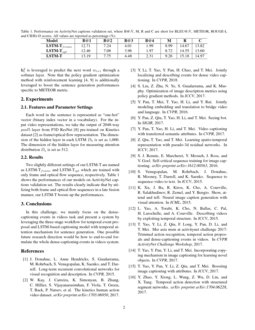 is the attention probability of

through a softmax layer. Note that the policy gradient optimization method with reinforcement learning

[4, 9] is additionally leveraged to boost the sentence generation performances specific to METEOR metric.

Each word in the sentence is represented as “one-hot” vector (binary index vector in a vocabulary). For the input video representations, we take the output of 2048-way pool5 layer from P3D ResNet [8] pre-trained on Kinetics dataset [2] as frame/optical flow representation. The dimension of the hidden layer in each LSTM Dh is set as 1,000. The dimension of the hidden layer for measuring attention distribution Da is set as 512.

Two slightly different settings of our LSTM-T are named as LSTM-Tframe and LSTM-Topt which are trained with only frame and optical flow sequence, respectively. Table 1 shows the performances of our models on ActivityNet captions validation set. The results clearly indicate that by utilizing both frame and optical flow sequences in a late fusion manner, our LSTM-T boosts up the performances.