We consider the statistical inverse problem of approximating an unknown function f from a linear measurement corrupted by additive Gaussian white noise. We employ a nonparametric Bayesian approach with standard Gaussian priors, for which the posterior-based reconstruction of f corresponds to a Tikhonov regulariser f̅ with a Cameron-Martin space norm penalty. We prove a semiparametric Bernstein-von Mises theorem for a large collection of linear functionals of f, implying that semiparametric posterior estimation and uncertainty quantification are valid and optimal from a frequentist point of view. The result is illustrated and further developed for some examples both in mildly and severely ill-posed cases. For the problem of recovering the source function in elliptic partial differential equations, we also obtain a nonparametric version of the theorem that entails the convergence of the posterior distribution to a fixed infinite-dimensional Gaussian probability measure with minimal covariance in suitable function spaces. As a consequence, we show that the distribution of the Tikhonov regulariser f̅ is asymptotically normal and attains the information lower bound, and that credible sets centred at f̅ have correct frequentist coverage and optimal diameter. 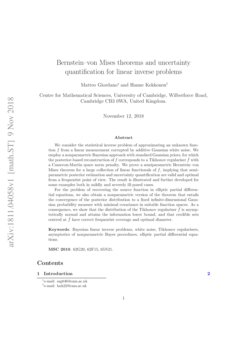 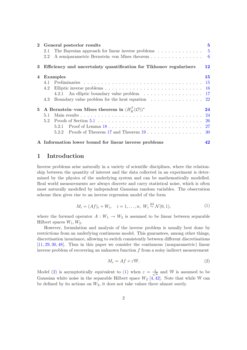 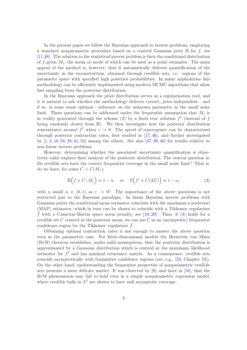 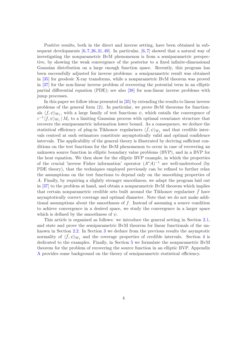 Inverse problems arise naturally in a variety of scientific disciplines, where the relationship between the quantity of interest and the data collected in an experiment is determined by the physics of the underlying system and can be mathematically modelled. Real world measurements are always discrete and carry statistical noise, which is often most naturally modelled by independent Gaussian random variables. The observation scheme then gives rise to an inverse regression model of the form

where the forward operator A:W1→W2 is assumed to be linear between separable Hilbert spaces W1,W2.

However, formulation and analysis of the inverse problem is usually best done by restrictions from an underlying continuous model. This guarantees, among other things, discretisation invariance, allowing to switch consistently between different discretisations [11, 29, 30, 48]. Thus in this paper we consider the continuous (nonparametric) linear inverse problem of recovering an unknown function f from a noisy indirect measurement

Model (2) is asymptotically equivalent to (1) when ε=1√n and W is assumed to be Gaussian white noise in the separable Hilbert space W2 [4, 42]. Note that while W can be defined by its actions on W2, it does not take values there almost surely.

In the present paper we follow the Bayesian approach to inverse problems, employing a standard nonparametric procedure based on a centred Gaussian prior Π for f, see[11, 48]. The solution to the statistical inverse problem is then the conditional distribution of f given Mε

, the mean or mode of which can be used as a point estimator. The main appeal of the method is, however, that it automatically delivers quantification of the uncertainty in the reconstruction, obtained through credible sets, i.e. regions of the parameter space with specified high posterior probabilities. In many applications this methodology can be efficiently implemented using modern MCMC algorithms that allow fast sampling from the posterior distribution.

In the Bayesian approach the prior distribution serves as a regularisation tool, and it is natural to ask whether the methodology delivers correct, prior-independent - and if so, in some sense optimal - inference on the unknown parameter in the small noise limit. These questions can be addressed under the frequentist assumption that Mε is in reality generated through the scheme (2) by a fixed true solution f† (instead of f being randomly drawn from Π). We then investigate how the posterior distribution concentrates around f† when ε→0. The speed of convergence can be characterised through posterior contraction rates, first studied in [17, 46], and further investigated by [1, 2, 10, 24, 26, 28, 27, 25, 41, 55] among the others. See also [37, 39, 40] for results relative to non-linear inverse problems.

However, determining whether the associated uncertainty quantification is objectively valid requires finer analysis of the posterior distribution. The central question is: Do credible sets have the correct frequentist coverage in the small noise limit? That is, do we have, for some C=C(Mε),

with a small α∈(0,1) as ε→0? The importance of the above questions is not restricted just to the Bayesian paradigm. In linear Bayesian inverse problems with Gaussian priors the conditional mean estimator coincides with the maximum a posteriori (MAP) estimator, which in turn can be shown to coincide with a Tikhonov regulariser ¯f with a Cameron-Martin space norm penalty, see [10, 20]. Thus, if (3) holds for a credible set C centred at the posterior mean, we can use C as an (asymptotic) frequentist confidence region for the Tikhonov regulariser ¯f.

Obtaining optimal contraction rates is not enough to answer the above question even in the parametric case. For finite-dimensional models the Bernstein–von Mises (BvM) theorem establishes, under mild assumptions, that the posterior distribution is approximated by a Gaussian distribution which is centred at the maximum likelihood estimator for

f† and has minimal covariance matrix. As a consequence, credible sets coincide asymptotically with frequentist confidence regions (see, e.g., [53, Chapter 10]). On the other hand, understanding the frequentist properties of nonparametric credible sets presents a more delicate matter. It was observed by [9], and later in [16], that the BvM phenomenon may fail to hold even in a simple nonparametric regression model, where credible balls in L2 are shown to have null asymptotic coverage.

Positive results, both in the direct and inverse setting, have been obtained in subsequent developments [6, 7, 26, 31, 49]. In particular, [6, 7] showed that a natural way of investigating the nonparametric BvM phenomenon is from a semiparametric perspective, by showing the weak convergence of the posterior to a fixed infinite-dimensional Gaussian distribution on a large enough function space. Recently, this program has been successfully adjusted for inverse problems: a semiparametric result was obtained in [35] for geodesic X-ray transforms, while a nonparametric BvM theorem was proved in [37] for the non-linear inverse problem of recovering the potential term in an elliptic partial differential equation (PDE); see also [38] for non-linear inverse problems with jump processes.

In this paper we follow ideas presented in [35] by extending the results to linear inverse problems of the general form (2). In particular, we prove BvM theorems for functionals ⟨f,ψ⟩W1, with a large family of test functions ψ, which entails the convergence of ε−1⟨f,ψ⟩W1|Mε to a limiting Gaussian process with optimal covariance structure that recovers the semiparametric information lower bound. As a consequence, we deduce the statistical efficiency of plug-in Tikhonov regularisers ⟨¯f,ψ⟩W1

and that credible intervals centred at such estimators constitute asymptotically valid and optimal confidence intervals. The applicability of the general theory is illustrated by deriving sufficient conditions on the test functions for the BvM phenomenon to occur in case of recovering an unknown source function in elliptic boundary value problems (BVP), and in a BVP for the heat equation. We then show for the elliptic BVP example, in which the properties of the crucial ’inverse Fisher information’ operator

(A∗A)−1 are well-understood (by PDE theory), that the techniques employed previously can be refined to further relax the assumptions on the test functions to depend only on the smoothing properties of A. Finally, by requiring a slightly stronger smoothness, we adapt the program laid out in [37] to the problem at hand, and obtain a nonparametric BvM theorem which implies that certain nonparametric credible sets built around the Tikhonov regulariser ¯f have asymptotically correct coverage and optimal diameter. Note that we do not make additional assumptions about the smoothness of f. Instead of assuming a source condition to achieve convergence in a desired space, we study the convergence in a larger space which is defined by the smoothness of ψ.

This article is organised as follows: we introduce the general setting in Section 2.1, and state and prove the semiparametric BvM theorem for linear functionals of the unknown in Section 2.2. In Section 3 we deduce from the previous results the asymptotic normality of ⟨¯f,ψ⟩W1 and the coverage properties of credible intervals. Section 4 is dedicated to the examples. Finally, in Section 5 we formulate the nonparametric BvM theorem for the problem of recovering the source function in an elliptic BVP. Appendix A provides some background on the theory of semiparametric statistical efficiency.

The forward operator A:W1(O1)→W2(O2) is assumed to be linear, bounded and injective, and W1(O1),W2(O2) are separable Hilbert spaces of real valued functions defined on O1, O2 which are d1-, d2-dimensional Riemannian manifolds respectively. Below we often denote Wi(O)=Wi, i=1,2. The forward operator A has a well defined adjoint A∗:W2(O2)→W1(O1) for which

Note that the more smoothing the forward operator A is, the larger we can choose ¯¯¯¯¯¯W. For example, if we assume that A:L2(Rd)→L2(Rd) is a t-times smoothing elliptic differential operator we may choose ¯¯¯¯¯¯W=H−t(Rd).

The noise amplitude is modelled by ε>0. The measurement noise W is a centred Gaussian white noise process (W(φ):φ∈W2) with covariance

Below we often write ⟨W,φ⟩W2 for the random variable W(φ). Observing data Mε means that we observe a realisation of the Gaussian process (Mε(φ)=⟨Mε,φ⟩W2:φ∈W2) with marginal distributions ⟨Mε,φ⟩W2∼N(⟨Af,φ⟩W2,ε2∥φ∥2W2); and we denote by (Ω,Σ,P) the probability space supporting Mε.

We assume that f follows a prior measure Π which is a Gaussian Borel probability measure on ¯¯¯¯¯¯W and denote its reproducing kernel Hilbert space (RKHS) or Cameron-Martin space by VΠ. Noticing (again, as argued in [37, Section 7.4]) that ℓ(f,Mε) given by (6

) can be taken to be jointly measurable, we can then use Bayes’ theorem to deduce that the posterior distribution of

f|Mε arising from observation (4) can be written as

We are interested in analysing Π(⋅|Mε) under the assumption that the measurement is generated from a true deterministic unknown f†, that is, when f=f† in (4) . In the following we assume that the prior Π satisfies the following concentration condition for a given f†∈¯¯¯¯¯¯W.

Let Π be a Gaussian Borel probability measure on a separable Hilbert space ¯¯¯¯¯¯W(O1) and let VΠ be its RKHS. Define the concentration function of Π for a fixed f†∈¯¯¯¯¯¯W(O1) as

The above condition characterises the asymptotic behaviour of the small ball probabilities Π(f:∥f−f†∥¯¯¯¯¯W≤δ), when δ→0, and guarantees that the prior puts enough mass around f† in ¯¯¯¯¯¯W-norm. The concentration function of Gaussian priors is well studied and Condition 2 is rather mild, see e.g. [18, 54] or [19, Chapter 2.6].

The proof follows ideas developed in [35] for the special case of A being the X-ray transform. We start by showing that it is enough to consider convergence of ΠDε(⋅|Mε) instead of Π(⋅|Mε) with some large enough set Dε. Here ΠDε(⋅|Mε) denotes the posterior arising from the prior Π(⋅∩Dε)/Π(Dε) restricted to Dε and renormalised. The second step is to find an appropriate set Dε

. We then proceed to study the moment generating function of

Let Π be a Gaussian Borel probability measure in ¯¯¯¯¯¯W. Suppose that for a fixed f†∈¯¯¯¯¯¯W its concentration function ϕΠ,f†(δε) satisfies Condition 2 with some sequence δε→0, such that δε/ε→∞. Let Π(⋅|Mε) be the posterior distribution arising from the measurement (4). Then for any Borel set Dε⊂¯¯¯¯¯¯W for which

and all ε>0 small enough we have

which implies ∥Π(⋅|Mε)−ΠDε(⋅|Mε)∥TV≤2Π(Dcε|Mε). Hence it suffices to prove the first limit.

Let ν be any probability measure on the set B={f:∥A(f−f†)∥2≤δ2ε}. Applying Jensen’s inequality to the exponential function we get for any ˜C∈R

Denote Z=1ε∫B⟨A(f−f†),W⟩W2dν(f)∼N(0,CZ) where, using again Jensen’s inequality, we can estimate

We can then conclude

Using the above with ˜C=1/2 we see that PMf†(Fε)≤e−δ2ε2ε2. Using Markov’s inequality, denoting EMf† the expectation with respect to PMf†, it suffices to to prove that

The second term can be written as

where Ag=˜g and Af=˜f. The last inequality follows from the fact e−x+ex≥2 for all x∈R. We can then conclude

Note that A is assumed to be linear and injective and hence the Cameron-Martin space V˜Π=A(VΠ) of Af is isometric to VΠ. We know that

Let ψ∈W1 be such that

Hence we can choose

and restrict to studying the posterior distribution ΠDε(⋅|Mε) arising from the prior ΠDε=Π(⋅∩Dε)/Π(Dε).

Then for all τ∈R we have

Denote fτ=f+τε˜ψ. Then the left hand side of (15) can be written as