We study the sequential testing problem of two alternative hypotheses regarding an unknown parameter in an exponential family when observations are costly. In a Bayesian setting, the problem can be embedded in a Markovian framework. Using the conditional probability of one of the hypotheses as the underlying spatial variable, we show that the cost function is concave and that the posterior distribution becomes more concentrated as time goes on. Moreover, we study time monotonicity of the value function. For a large class of model specifications, the cost function is non-decreasing in time, and the optimal stopping boundaries are thus monotone. 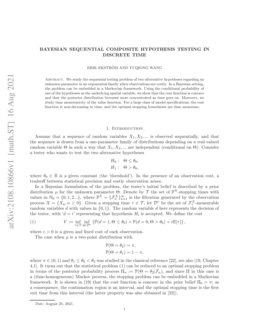 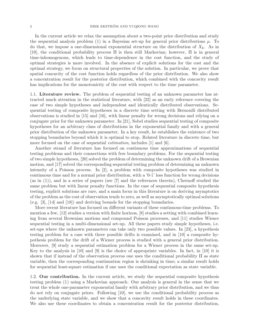 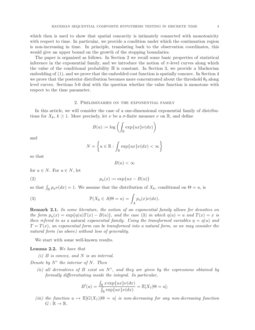 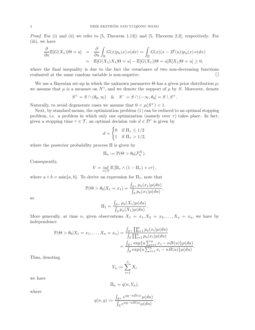 Assume that a sequence of random variables

X1,X2,... is observed sequentially, and that the sequence is drawn from a one-parameter family of distributions depending on a real-valued random variable Θ in such a way that X1,X2,... are independent (conditional on Θ). Consider a tester who wants to test the two alternative hypotheses

where θ0∈R is a given constant (the ’threshold’). In the presence of an observation cost, a tradeoff between statistical precision and costly observation arises.

In a Bayesian formulation of the problem, the tester’s initial belief is described by a prior distribution μ for the unknown parameter Θ. Denote by T the set of FX-stopping times with values in N0={0,1,2...}, where FX={FXn}∞n=1 is the filtration generated by the observation process X={Xn,n≥0}. Given a stopping time τ∈T, let Dτ be the set of FXτ-measurable random variables d with values in {0,1}. The random variable d here represents the decision of the tester, with ’d=i’ representing that hypothesis Hi is accepted. We define the cost

where c>0 is a given and fixed cost of each observation.

The case when μ is a two-point distribution with

Πn:=P(Θ=θ2|Fn), and since Π in this case is a (time-homogeneous) Markov process, the stopping problem can be embedded in a Markovian framework. It is shown in [19] that the cost function is concave in the prior belief Π0=π; as a consequence, the continuation region is an interval, and the optimal stopping time is the first exit time from this interval (the latter property was also obtained in [22]).

In the current article we relax the assumption about a two-point prior distribution and study the sequential analysis problem (1) in a Bayesian set-up for general prior distributions μ. To do that, we impose a one-dimensional exponential structure on the distribution of Xk. As in [19], the conditional probability process Π is then still Markovian; however, Π is in general time-inhomogenous, which leads to time-dependence in the cost function, and the study of optimal strategies is more involved. In the absence of explicit solutions for the cost and the optimal strategy, we focus on structural properties of the solution. In particular, we prove that spatial concavity of the cost function holds regardless of the prior distribution. We also show a concentration result for the posterior distribution, which combined with the concavity result has implications for the monotonicity of the cost with respect to the time parameter.

The problem of sequential testing of an unknown parameter has attracted much attention in the statistical literature, with [22]

, with linear penalty for wrong decisions and relying on a conjugate prior for the unknown parameter. In

[21], Sobel studies sequential testing of composite hypotheses for an arbitrary class of distributions in the exponential family and with a general prior distribution of the unknown parameter. In a key result, he establishes the existence of two stopping boundaries beyond which it is optimal to stop. Related literature in discrete time, but more focused on the case of sequential estimation, includes [1] and [6].

, a problem with composite hypotheses was studied in continuous time and for a normal prior distribution, with a ’0-1’ loss function for wrong decisions (as in (

1)), and in a series of papers (see [7] and the references therein), Chernoff studied the same problem but with linear penalty functions. In the case of sequential composite hypothesis testing, explicit solutions are rare, and a main focus in this literature is on deriving asymptotics of the problem as the cost of observation tends to zero, as well as asymptotically optimal solutions (e.g. [3], [14] and [18]) and deriving bounds for the stopping boundaries.

More recent literature has focused on different variants of these continuous-time problems. To mention a few, [12] studies a version with finite horizon, [8] studies a setting with combined learning from several Brownian motions and compound Poisson processes, and [11] studies Wiener sequential testing in a multi-dimensional set-up. All these papers study simple hypotheses, i.e. set-ups where the unknown parameters can take only two possible values. In [23], a hypothesis testing problem for a case with three possible drifts is examined, and in [10] a composite hypothesis problem for the drift of a Wiener process is studied with a general prior distribution. Moreover, [9] study a sequential estimation problem for a Wiener process in the same set-up. Key to the analysis in [10] and [9] is the choice of appropriate variables. In fact, in [10] it is shown that if instead of the observation process one uses the conditional probability Π as state variable, then the corresponding continuation region is shrinking in time; a similar result holds for sequential least-square estimation if one uses the conditional expectation as state variable.

In the current article, we study the sequential composite hypothesis testing problem (1) using a Markovian approach. Our analysis is general in the sense that we treat the whole one-parameter exponential family with arbitrary prior distribution, and we thus do not rely on conjugate priors. Following [10], we use the conditional probability process as the underlying state variable, and we show that a concavity result holds in these coordinates. We also use these coordinates to obtain a concentration result for the posterior distribution, which then is used to show that spatial concavity is intimately connected with monotonicity with respect to time. In particular, we provide a condition under which the continuation region is non-increasing in time. In principle, translating back to the observation coordinates, this would give an upper bound on the growth of the stopping boundaries.

The paper is organised as follows. In Section 2 we recall some basic properties of statistical inference in the exponential family, and we introduce the notion of π-level curves along which the value of the conditional probability Π is constant. In Section 3, we provide a Markovian embedding of (1), and we prove that the embedded cost function is spatially concave. In Section 4 we prove that the posterior distribution becomes more concentrated about the threshold θ0 along level curves. Sections 5-6 deal with the question whether the value function is monotone with respect to the time parameter.

2. Preliminaries on the exponential family

In this article, we will consider the case of a one-dimensional exponential family of distributions for Xk, k≥1. More precisely, let ν be a σ-finite measure ν on R, and define

so that ∫Rpuν(dx)=1. We assume that the distribution of Xk, conditional on Θ=u, is

We start with some well-known results.

Denote by N∘ the interior of N. Then

where the final inequality is due to the fact the covariance of two non-decreasing functions evaluated at the same random variable is non-negative. ∎

We use a Bayesian set-up in which the unknown parameter Θ has a given prior distribution μ; we assume that μ is a measure on N∘, and we denote the support of μ by S. Moreover, denote

Naturally, to avoid degenerate cases we assume that 0<μ(S+)<1.

Next, by standard means, the optimization problem (1) can be reduced to an optimal stopping problem, i.e. a problem in which only one optimization (namely over τ) takes place. In fact, given a stopping time τ∈T, an optimal decision rule d∈Dτ is given by

where the posterior probability process Π is given by

where a∧b=min{a,b}. To derive an expression for Π1, note that

More generally, at time n, given observations X1=x1,X2=x2,…,Xn=xn, we have by independence

The function y↦q(n,y):R→(0,1) is an increasing bijection for each fixed n.

Since μn,y assigns positive mass on each side of the threshold θ0, the above covariance is strictly positive. Thus ∂q(n,y)∂y>0, so q(n,⋅) is strictly increasing. Moreover,

It follows from Lemma 2.4 that the process Π is a (time-inhomogeneous) Markov process, and we can write the Π-process in terms of Y as

Furthermore, this allows us to embed the optimal stopping problem (1) as a time-dependent problem in terms of the Markov process Π as

This follows directly from the Markovian structure of the process Π. ∎

To simplify the notation, we prove the statement for n=0. Moreover, we will assume that f is twice continuously differentiable; the general case follows readily by approximation.

We will show that

To do that, first note that

To study the first factor of the integrand in (3), denote g(y):=∫Reuyμ(du) and note that

Note that F is a quadratic function in u, and that the coefficient of u2 is positive since

Consequently, the set {F<0} is a bounded interval (possibly empty). Moreover, since

Therefore we must have

where we used (8) in the last equality.

Define the cost function VN(n,π) as in (5), but with the infimum being taken over stopping times τ≤N−n (VN is then the value function in a problem with a finite horizon). By an iterated use of Lemma 3.1 and Lemma 3.2 and the fact that the minimum of two concave functions is concave, π↦VN(n,π) is concave. Moreover, it is straightforward to check that VN(n,π)→V(n,π) as N→∞, and since the pointwise limit of concave functions is concave, the result follows. ∎

In accordance with standard stopping theory, we introduce the continuation region C by

and the stopping region D by

is an optimal strategy for our testing problem.

The concavity of the value function has important implications for the structure of the continuation region.

4. Concentration of the posterior distribution

along a level curve. This result, however natural it appears, seems to be new in the literature; for related results showing that the conditional variance of the mean-square estimate is a supermartingale, see

For the first claim, it suffices to show that

Therefore, since B is convex, we have that f changes its monotonicity (from increasing to decreasing) at most once. Now we consider two separate cases:

On the other hand, if (ii) holds, then the fact that f changes its monotonicity at most once gives that (f(u)−f(θ0))(u−θ0)≤0 for all u≥a. Consequently,