Identifying altered pathways that are associated with specific cancer types can potentially bring a significant impact on cancer patient treatment. Accurate identification of such key altered pathways information can be used to develop novel therapeutic agents as well as to understand the molecular mechanisms of various types of cancers better. Tri-matrix factorization is an efficient tool to learn associations between two different entities (e.g., cancer types and pathways in our case) from data. To successfully apply tri-matrix factorization methods to biomedical problems, biological prior knowledge such as pathway databases or protein-protein interaction (PPI) networks, should be taken into account in the factorization model. However, it is not straightforward in the Bayesian setting even though Bayesian methods are more appealing than point estimate methods, such as a maximum likelihood or a maximum posterior method, in the sense that they calculate distributions over variables and are robust against overfitting. We propose a Bayesian (semi-)nonnegative matrix factorization model for human cancer genomic data, where the biological prior knowledge represented by a pathway database and a PPI network is taken into account in the factorization model through a finite dependent Beta-Bernoulli prior. We tested our method on The Cancer Genome Atlas (TCGA) dataset and found that the pathways identified by our method can be used as a prognostic biomarkers for patient subgroup identification. 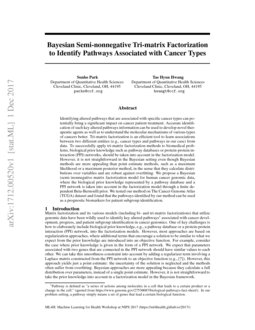 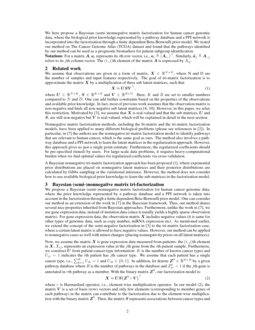 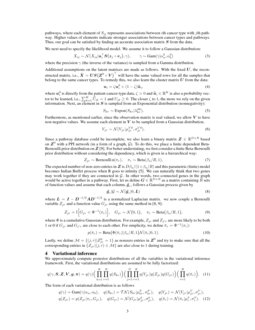 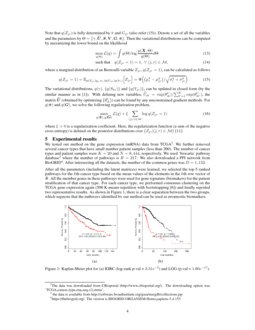 Matrix factorization and its various models (including bi- and tri-matrix factorizations) that utilize genomic data have been wildly used to identify key altered pathways111Pathway is defined as ”a series of actions among molecules in a cell that leads to a certain product or a change in the cell.” (quoted from https://www.genome.gov/27530687/biological-pathways-fact-sheet/). In our problem setting, a pathway simply means a set of genes that lead a certain biological function. associated with cancer development, progress, and patient subgroup identification in cancer genomics. One of key challenges is how to elaborately include biological prior knowledge, e.g., a pathway database or a protein-protein interaction (PPI) network, into the factorization models. However, most approaches are based on regularization approaches, where additional terms that encourage a solution to be similar to what we expect from the prior knowledge are introduced into an objective function. For example, consider the case where prior knowledge is given in the form of a PPI network. We expect that parameters associated with two genes that are connected in the PPI network should have similar values to each other. We can take this smoothness constraint into account by adding a regularizer term involving a Laplace matrix constructed from the PPI network to an objective function (e.g., [7]). However, this approach yields just a point estimate: the uncertainty of the solution is neglected and the methods often suffer from overfitting. Bayesian approaches are more appealing because they calculate a full distribution over parameters, instead of a single point estimate. However, it is not straightforward to take the prior knowledge into account in a factorization model in the Bayesian framework.

We here propose a Bayesian (semi-)nonnegative matrix factorization for human cancer genomic data, where the biological prior knowledge represented by a pathway database and a PPI network is incorporated into the factorization through a finite dependent Beta-Bernoulli prior model. We tested our method on The Cancer Genome Atlas (TCGA) dataset and found that the pathways identified by our method can be used as a prognostic biomarkers for patient subgroup identification.

Notations: For a matrix A, \boldmathai represents its i

\boldmathai≜(\boldmathAi,:)⊤. Similarly, →\boldmathaj≜\boldmathA:,j refers to its jth column vector. The (i,j)th element of the matrix A is expressed by Aij.

We assume that observations are given in a form of matrix, \boldmathX∈RN×D, where N and D are the number of samples and input features respectively. The goal of tri-matrix factorization is to approximate the matrix X by a multiplication of three sub latent matrices, such that

where \boldmathU∈RN×K, \boldmathS∈RK×R and \boldmathV∈RR×D. Here, K and R are set to smaller numbers compared to N and D. One can add further constraints based on the properties of the observations and available prior knowledge. In fact, most of previous work assumes that the observation matrix is non-negative and finds all non-negative sub latent matrices [4, 10]. However, in this paper, we relax this restriction. Motivated by [3], we assume that X is real-valued and that the sub matrices, U and S, are still non-negative but V is real-valued, which will be explained in detail in the next section.

Nonnegative matrix factorization methods, including the bi-matrix and the tri-matrix factorization models, have been applied to many different biological problems (please see references in [2]). In particular, in [7] the authors use the nonnegative tri-matrix factorization model to identify pathways that are relevant to human cancer, which is the same goal as ours. The method also involves a pathway database and a PPI network to learn the latent matrices in the regularization approach. However, this approach gives us just a single point estimate. Furthermore, the regularized coefficients should be pre-specified (tuned) by users. For large-scale data problems, it requires heavy-computational burden when we find optimal values for regularized coefficients via cross-validation.

A Bayesian nonnegative tri-matrix factorization approach has been proposed [1], where exponential prior distributions are placed on nonnegative latent matrices and their posterior distributions are calculated by Gibbs sampling or the variational inference. However, the method does not consider how to use available biological prior knowledge to learn the sub-matrices in the factorization model.

We propose a Bayesian (semi-)nonnegative matrix factorization for human cancer genomic data, where the prior knowledge represented by a pathway database and a PPI network is taken into account in the factorization through a finite dependent Beta-Bernoulli prior model. One can consider our method as an extension of the work in [7] in the Bayesian framework. Thus, our method shares several nice properties inherited from Bayesian approaches. Furthermore, unlike the work in [7], we use gene expression data, instead of mutation data (since it usually yields a highly sparse observation matrix). For gene expression data, the observation matrix X includes negative values (it is same for other types of genomic data, such as copy number, miRNA expression etc). As mentioned earlier, we extend the concept of the semi-negative factorization in [3] to the tri-matrix factorization case, where a certain latent matrix is allowed to have negative values. However, our method can be applied to nonnegative cases as well with minor changes (placing nonnegativity priors on all latent matrices).

Now, we assume the matrix X is gene expression data measured from patients: the (i,j)th element in X, Xij, represents an expression value at the jth gene from the ith patient sample. Furthermore, we construct U from patient-cancer-type information: K is the number of known cancer types and Uij=1 indicates the ith patient has jth cancer type. We assume that each patient has a single cancer type, i.e., ∑Kk=1Uik=1 and Uik∈{0,1}. In addition, let denote \boldmathZ0∈RD×R by a given pathway database where R is the number of pathways in the database and Z0jr=1 if the jth gene is annotated in rth pathway as a member. With the binary matrix \boldmathZ0, our factorization model is:

We next need to specify the likelihood model. We assume it to follow a Gaussian distribution:

where the precision γ

(the inverse of the variance) is sampled from a Gamma distribution.

Additional assumptions on the latent matrices are made as follows. With the fixed U, the reconstructed matrix, i.e., ^\boldmathX=\boldmathU\boldmathS(% \boldmathZ0∘\boldmathV)⊤ will have the same valued rows for all the samples that belong to the same cancer types. To remedy this, we also learn the cluster matrix U from the data:

is also a probability vector to be learned, i.e.,

is sampled from an Exponential distribution (nonnegativity):

Furthermore, as mentioned earlier, since the observation matrix is real valued, we allow V to have non-negative values. We assume each element in V to be sampled from a Gaussian distribution.

Since a pathway database could be incomplete, we also learn a binary matrix \boldmathZ∈RD×R based on \boldmathZ0 with a PPI network (in a form of a graph, G). To do this, we place a finite dependent Beta-Bernoulli prior distribution on Z [9]. For better understating, we first consider a finite Beta-Bernoulli prior distribution without considering the dependency, which is given in a hierarchical way:

The expected number of non-zero entries in Z is Dβa/(1+βa/R) and this parametric (finite) model becomes Indian Buffet process when R goes to infinity [5]. We can naturally think that two genes may work together if they are connected in G. In other words, two connected genes in the graph would be active together in a pathway. First, let us define \boldmathG∈RD×R as a matrix containing R sets of function values and assume that each column, →\boldmathgr, follows a Gaussian process given by

where \boldmathL=\boldmathI−\boldmathD−1/2% \boldmathA\boldmathD−1/2 is a normalized Laplacian matrix. we now couple a Bernoulli variable Zjr and a function value Gjr using the same method in [8, 9]:

where Φ is a cumulative Gaussian distribution. For example, Zjr and Zj′r are more likely to be both 1 or 0 if Gjr and Gj′r are close to each other. For simplicity, we define ¯πr=Φ−1(πr):

Lastly, we define M={(j,r)|Z0jr=1} as nonzero entries in \boldmathZ0 and try to make sure that all the corresponding entries in {Zjr|(j,r)∈M} are also close to 1 during training.

The form of each variational distribution is as follows

Note that q(Zjr) is fully determined by ¯π and Gjr (also refer (15)). Denote a set of all the variables and the parameters by Θ={γ,˜\boldmathU,\boldmathS,% \boldmathV,\boldmathG,¯\boldmathπ}. Then the variational distributions can be computed by maximizing the lower bound on the likelihood

where a marginal distribution of an Bernoulli variable Zjr, q(Zjr=1), can be calculated as follows

The variational distributions, q(γ), {q(Skr)} and {q(Vjr)}, can be updated in closed form (by the similar manner as in [1]). With defining new variables, ˜Uik=exp(θUik)/∑Kk′=1exp(θUik′), the matrix ˜\boldmathU (obtained by optimizing {θUik}) can be found by any unconstrained gradient methods. For q(¯\boldmathπ) and q(\boldmathG), we solve the following regularization problem,

where ξ>0 is a regularization coefficient. Here, the regularization function (a sum of the negative cross entropy) is defined on the posterior distributions over {Zjr|(j,r)∈M} [11].

We tested our method on the gene expression (mRNA) data from TCGA222The data was downloaded from CBioportal (http://www.cbioportal.org/). The downloading option was ’TCGA_cancer_type_rna_seq_v2_mrna’.. We further removed several cancer types that have small number patient samples (less than 200). The number of cancer types and patient samples were K=20 and N=8,444, respectively. We used ’biocarta’ pathway database333 the data is available from http://software.broadinstitute.org/gsea/msigdb/collections.jsp where the number of pathways is R=217. We also downloaded a PPI network from BioGRID444https://thebiogrid.org/. The version is BIOGRID-ORGANISM-Homo_sapiens-3.4.153. After intersecting all the datasets, the number of the common genes was D=1,152.

After all the parameters (including the latent matrices) were learned, we selected the top-5 ranked pathways for the kth cancer type based on the mean values of the elements in the kth row vector of S

. All the member genes in these pathways were used for gene signature (biomakers) for the patient stratification of that cancer type. For each cancer type, we performed consensus clustering on the TCGA gene expression again (500 K-means repetition with bootstrapping [6]) and finally reported two representative results. As shown in Figure

1, there is a clear separation between the two groups, which suggests that the pathways identified by our method can be used as prognostic biomarkers.