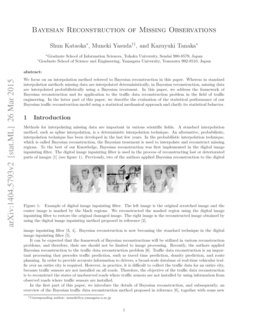 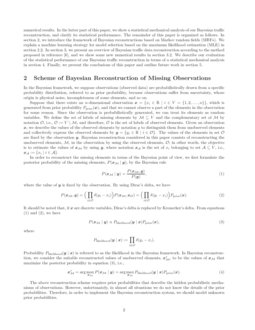 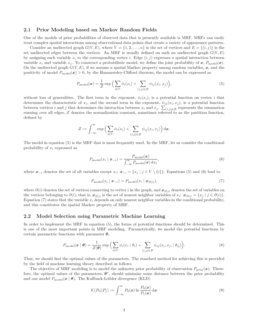 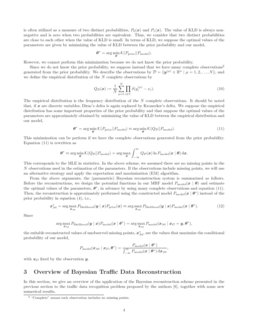 , we introduce the framework of Bayesian reconstructions based on Markov random fields (MRFs). We explain a machine learning strategy for model selection based on the maximum likelihood estimation (MLE) in section

2.2. In section 3, we present an overview of Bayesian traffic data reconstruction according to the method proposed in reference [6], and we show some new numerical results in section 3.2. We describe our evaluation of the statistical performance of our Bayesian traffic reconstruction in terms of a statistical mechanical analysis in section 4. Finally, we present the conclusions of this paper and outline future work in section 5.

In the Bayesian framework, we suppose observations (observed data) are probabilistically drawn from a specific probability distribution, referred to as prior probability, because observations suffer from uncertainty, whose origin is physical noise, incompleteness of some elements, and so on.

Suppose that there exists an n-dimensional observation x={xi∈R∣i∈V={1,2,…,n}}, which is generated from prior probability P\mrmprior(x)

, and that we cannot observe a part of the elements in the observation for some reason. Since the observation is probabilistically generated, we can treat its elements as random variables. We define the set of labels of missing elements by

P(x\mcalM∣y), by the Bayesian rule

where the value of y is fixed by the observation. By using Dirac’s delta, we have

It should be noted that, if x are discrete variables, Dirac’s delta is replaced by Kronecker’s delta. From equations (1) and (2), we have

Probability P\mrmlikelihood(y∣x) is referred to as the likelihood in the Bayesian framework. In Bayesian reconstruction, we consider the suitable reconstructed values of unobserved elements, x∗\mcalM, to be the values of x\mcalM that maximize the posterior probability in equation (3), i.e.,

2.1 Prior Modeling based on Markov Random Fields

One of the models of prior probabilities of observed data that is presently available is MRF. MRFs can easily treat complex spatial interactions among observational data points that create a variety of appearance patterns.

without loss of generalities. The first term in the exponent, ϕi(xi), is a potential function on vertex i that determines the characteristic of xi, and the second term in the exponent, ψij(xi,xj), is a potential function between vertices i and j that determines the interaction between xi and xj. ∑(i,j)∈E represents the summation running over all edges, Z denotes the normalization constant, sometimes referred to as the partition function, defined by

The model in equation (5) is the MRF that is most frequently used. In the MRF, let us consider the conditional probability of xi expressed as

Thus, we should find the optimal values of the parameters. The standard method for achieving this is provided by the field of machine learning theory described as follows.

The objective of MRF modeling is to model the unknown prior probability of observation P\mrmprior(x). Therefore, the optimal values of the parameters, θ∗, should minimize some distance between the prior probability and our model P\mrmmodel(x∣θ)

However, we cannot perform this minimization because we do not know the prior probability.

This minimization can be perform if we have the complete observations generated from the prior probability. Equation (11) is rewritten as

This corresponds to the MLE in statistics. In the above scheme, we assumed there are no missing points in the N observations used in the estimation of the parameters. If the observations include missing points, we will use an alternative strategy and apply the expectation and maximization (EM) algorithm.

the suitable reconstructed values of unobserved missing points, x∗\mcalM, are the values that maximize the conditional probability of our model,

with x\mcalO fixed by the observation y.

In this section, we give an overview of the application of the Bayesian reconstruction scheme presented in the previous section to the traffic data recognition problem proposed by the authors [6], together with some new numerical results.

We applied the Bayesian reconstruction scheme to traffic data reconstruction. Our goal is to reconstruct the states of roads, and therefore, random variables x are assigned to roads. In order to formulate an MRF for a road network, we construct an undirected graph G(V,E) as follows: we assign each vertex on each road and draw each edge between two roads that are connected to each other at a traffic intersection (see figure 2).

On the undirected graph, we define the MRF by

where θ={h,ξ,J} are the parameters of the model 333Although this expression seems to differ slightly from the original model proposed in reference [6], this expression is essentially equivalent to the original model.. The variable xi∈R expresses the state of road i. In this paper, we consider x as traffic densities according to the method in reference [6]. The traffic density on road i is defined by the number of cars per unit area on road i; high densities tend to lead to traffic jams. This MRF is obtained by setting ϕi(xi)=hixi−ξx2i/2 and ψij(xi,xj)=J(xi−xj)2/2 in equation (5). Parameter hi is the bias that controls the level of the traffic density of road i, and parameter ξ>0

controls the variances in the traffic densities. The interaction term in the last term in the exponent in equation (

13) corresponds to our assumption that is traffic densities of neighboring roads take close values. Parameter J≥0 controls the strength of the assumption. This MRF forms the multi-dimensional Gaussian and is known as the Gaussian graphical model (GGM).

Hence, we find that the reconstructed densities, x∗\mcalM, are the expectations of P\mrmmodel(x\mcalM∣x\mcalO=y,θ∗). The expectations are obtained by solving the simultaneous equations,

by an iteration method, where |\mcalA| denotes the number of elements in the assigned set \mcalA and

In this section, we describe the application of our Bayesian traffic data reconstruction to the road network of the city of Sendai (shown in figure 3) and show the performance of our model.

Figure 3 shows the road network of Sendai which consists of about ten thousand roads. According to our Bayesian traffic data reconstruction scheme, first, we defined the MRF model shown in equation (13) for the road network. The structure of the MRF was constructed according to figure 2.

The parameters were determined by the maximum likelihood estimation shown in section 2.2 with the L2 regularizations [6]. Regularizations are frequently used to avoid over-fitting to noises in training data. In the maximum likelihood estimation, we used N=359 complete traffic data generated by a traffic simulator for the road network of Sendai. Although the traffic data were not real, they were presumed to represent typical behavior of traffic in Sendai. Using the MRF model, we reconstructed the traffic densities of Sendai.

Figure 4 shows the traffic density data that were not used in the learning, namely, the test data. In order to visually represent the densities, we quantized the densities into five stages at 0.03 intervals; each road is colored according to its quantized traffic density. The densities increase in the following order: black, blue, green, yellow, and red. Thus, a road colored black has a density in the interval [0,0.03].

For the traffic density data shown in figure 4, we suppose that the densities in some roads are unobserved and we randomly select unobserved roads with probability p=0.8.

Each point is the average value of MSE over 100 trials using the leave-one-out cross-validation method. It can be seen that the error increases with the value of the missing probability p.

In this section, we clarify the relationship between the model parameters in the MRF model in equation (13) and the reconstruction performance from a statistical mechanical point of view.

In our analysis, we assume that the prior probability of traffic data has the same form as our model in equation (13),

and assume the values of h are independently drawn from the identical distribution ph(h), where notation Z(θ) is the normalization constant and notation ∑i<j∈V is the summation running over all distinct pairs of vertices i and j in V={1,2,…,n}, i.e., ∑i<j∈V=∑ni=1∑nj=i+1. Although road networks have complex structures, we neglect the structures and employ the fully-connected model with no structure for the simplicity of analysis. For the observations generated from the prior probability in equation (18), we conduct the reconstructions by using the model taking the form

(see appendix A for the detailed derivation). Notations μh and με are the averages of ph(h) and pε(ε), respectively. From equation (37), we have

where \ave⋯\mrmprior:=∫∞−∞(⋯)P\mrmprior(x∣θ)\diffx. Thus, equation (22) can be rewritten as

This means that f(x\mcalO) coincides with \avef(x\mcalO)\mrmprior with a probability of one. This leads to relation

and then, equation (22) is rewritten as

from equation (36), we obtain the average of x∗i(x\mcalO) in equation (23) with respect to the prior probability as

where σ2h and σ2ε denote the variances of ph(h) and pε(ε), respectively. Equation (27) does not require the information about which roads are selected as the unobserved. The dependency on these data disappears as a result of the averaging operations.

It is obvious that E takes the minimum value

when there is no model error between the prior model in equation (18) and the reconstruction model in equation (19), that is, when J=J0, ξ=ξ0, and με=σε=0. In the following, we examine numerically the relation between the averaged MSE and the parameters in the reconstruction model. For the numerical experiments, we set the parameters in the prior model to J=1, ξ=0.2, μh=1, and σh=0.5.

First, we examine the relation when a model error exists only in the interaction parameters, that is, when ξ0=ξ, με=σε=0, and J0=J+r. The parameter r is the error of interaction. Figure 9 shows the plot of E against error r when p=0.5.

Figure 10 shows the plot of E against missing rate p when ξ0=0.4, με=0.1, σε=0, and J0=J. The reconstruction performance level decreases with the increase in the value of p. This performance behavior seems to be qualitatively similar to the behavior of our numerical traffic density reconstruction in figure 8. From this result, we can presume that the behavior of MSE in figure 8 is caused primarily by the model errors in either the biases or the variance, or both.

In the latter part of this paper, we evaluated the statistical performance of our reconstruction by using the statistical mechanical analysis, that is mean-field analysis. In our analysis, we used the simplified reconstruction model, which has no network structures, for the convenience of calculations. However, since real road networks are network structures, the result of our evaluation can be only a rough approximation. The authors proposed a method based on the belief propagation method to evaluate the statistical properties of Bayesian reconstructions on structured networks in the context of image processing [8]. We strongly suggest that the method can be applied to Bayesian traffic reconstruction and can lead to more realistic evaluations.

The partition function in equation (18) is

By using the Hubbard-Stratonovich transformation, we have

The Gaussian integral leads to

Therefore, the free energy (per one variable) for the prior model in (18) is expressed by

where f(x\mcalO) is defined in equation (24) and ∑i<j∈\mcalM represents the summation running over all distinct pairs of vertices i and j in \mcalM⊆V. \mcalZ(θ0,x\mcalO) represents the partition function defined by

Using almost the same derivation as the above mean-field derivation for the prior model, we find

where t is the number of missing elements defined in section 4 and p=t/n is associated with the missing rate. From equation (33), we can obtain the free energy (per one variable) for the conditional probability of the reconstruction model by