The problem of low-rank matrix estimation recently received a lot of attention due to challenging applications. A lot of work has been done on rank-penalized methods and convex relaxation, both on the theoretical and applied sides. However, only a few papers considered Bayesian estimation. In this paper, we review the different type of priors considered on matrices to favour low-rank. We also prove that the obtained Bayesian estimators, under suitable assumptions, enjoys the same optimality properties as the ones based on penalization. 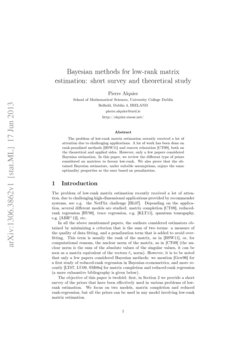 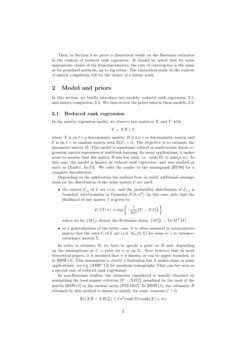 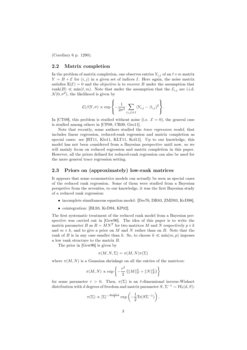 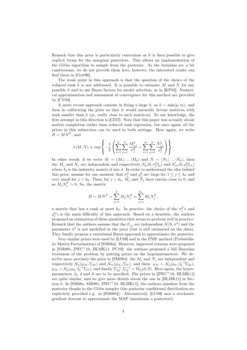 In all the above mentionned papers, the authors considered estimators obtained by minimizing a criterion that is the sum of two terms: a measure of the quality of data fitting, and a penalization term that is added to avoid overfitting. This term is usually the rank of the matrix, as in [BSW11], or, for computational reasons, the nuclear norm of the matrix, as in [CT09]

(the nuclear norm is the sum of the absolute values of the singular values, it can be seen as a matrix equivalent of the vectors

The objective of this paper is twofold: first, in Section 2 we provide a short survey of the priors that have been effectively used in various problems of low-rank estimation. We focus on two models, matrix completion and reduced rank-regression, but all the priors can be used in any model involving low-rank matrix estimation.

we prove a theoretical result on the Bayesian estimator in the context of reduced rank regression. It should be noted that for some appropriate choice of the hyperparameters, the rate of convergence is the same as for penalized methods, up to

log terms. The theoretical study in the context of matrix completion will be the object of a future work.

In this section, we briefly introduce two models: reduced rank regression, 2.1, and matrix completion, 2.2. We then review the priors used in these models, 2.3.

In the matrix regression model, we observe two matrices X and Y with

. This model is sometimes refered as multivariate linear regression, matrix regression or multitask learning. In many applications, it makes sense to assume that the matrix

B has low rank, i.e. rank(B)≪min(p,m). In this case, the model is known as reduced rank regression, and was studied as early as [And51, Ize75]. We refer the reader to the monograph [RV98] for a complete introduction.

Depending on the application the authors have in mind, additional assumptions on the distribution of the noise matrix E are used:

In order to estimate B, we have to specify a prior on B and, depending on the assumptions on E, a prior on σ or on Σ. Note however that in most theoretical papers, it is assumed that σ is known, or can be upper bounded, as in [BSW11]. This assumption is clearly a limitation but it makes sense in some applications: see e.g. [ABH+12] for quantum tomography (that can bee seen as a special case of reduced rank regression).

In non-Bayesian studies, the estimator considered is usually obtained by minimizing the least-square criterion ∥Y−XB∥2F penalized by the rank of the matrix [BSW11] or the nuclear norm [YELM07]. In [BSW11], the estimator ^B obtained by this method is shown to satisfy, for some constant C>0,

The first systematic treatment of the reduced rank model from a Bayesian perspective was carried out in [Gew96]. The idea of this paper is to write the matrix parameter B as B=MNT for two matrices M and N respectively p×k and m×k, and to give a prior on M and N rather than on B. Note that the rank of B is in any case smaller than k. So, to choose k≪min(m,p) imposes a low rank structure to the matrix B.

where π(M,N) is a Gaussian shrinkage on all the entries of the matrices:

for some parameter τ>0. Then, π(Σ) is an ℓ-dimensional inverse-Wishart distribution with ddegrees of freedom and matrix parameter S, Σ−1∼Wℓ(d,S):

Remark that this prior is particularly convenient as it is then possible to give explicit forms for the marginal posteriors. This allows an implementation of the Gibbs algorithm to sample from the posterior. As the formulas are a bit cumbersome, we do not provide them here, however, the interested reader can find them in [Gew96].

The weak point in this approach is that the question of the choice of the reduced rank k is not addressed. It is possible to estimate M and N for any possible k

and to use Bayes factors for model selection, as in

[KP02]. Numerical approximation and assessment of convergence for this method are provided by [CV04].

A more recent approach consists in fixing a large k, as k=min(p,m), and then in calibrating the prior so that it would naturally favour matrices with rank smaller than k (or, really close to such matrices). To our knowledge, the first attempt in this direction is [LT07]. Note that this paper was actually about matrix completion rather than reduced rank regression, but once again, all the priors in this subsection can be used in both settings. Here again, we write B=MNT, and

. In order to understand the idea behind this prior, assume for one moment that

a matrix that has a rank at most k0. In practice, the choice of the σ2j’s and ρ2j

’s is the main difficulty of this approach. Based on a heuristic, the authors proposed an estimation of these quantities that seems to perform well in practice. Remark that the authors assume that the

Ei,j are independent N(0,σ2) and the parameter σ2 is not modelled in the prior (but is still estimated on the data). They finally propose a variational Bayes approach to approximate the posterior.

Very similar priors were used by [LU09] and in the PMF method (Probabilistic Matrix Factorisation) of [SM08a]. However, improved versions were proposed in [SM08b, ZWC+10, BLMK11, PC10]: the authors proposed a full Bayesian treatment of the problem by putting priors on the hyperparameters. We describe more precisely the prior in [SM08b]: the Mj and Nj are independent and respectively Np(μM,ΣM) and Nm(μN,ΣN), and then: μM∼Np(μ0,β−10ΣM), μM∼Np(μ0,β−10ΣN), and finally Σ−1M,Σ−1N∼Wp(d,S). Here again, the hyperparameters β0, d and S are to be specified. The priors in [ZWC+10, BLMK11] are quite similar, and we give more details about the one in [BLMK11] in Section 3. In [SM08a, SM08b, ZWC+10, BLMK11], the authors simulate from the posterior thanks to the Gibbs sampler (the posterior conditional distribution are explicitely provided e.g. in [SM08b]). Alternatively, [LU09]

uses a stochastic gradient descent to approximate the MAP (maximum a posteriori).

Some papers proposed a kernelized version of the reduced rank regression and matrix completion models. Let Mi denote the i-th row of M and Nh the h-th row of N. Then, B=MNT leads to Bi,h=Mi(Nh)T. We can replace this relation by

for some RKHS Kernel K. In [YTS05], the authors propose a Bayesian formulation of this model: B is seen as a Gaussian process on {1,…,p}×{1,…,m} with expectation zero and covariance function related to the kernel K. The same idea is refined in [YLZG09] and applied successfully to very large datasets, including the NetFlix challenge dataset, thanks to two algorithms: the Gibbs sampler, and the EM algorithm to approximate the MAP.

Finally, we want to mention the nice theoretical work [AW04, AW05]: in these papers, the authors study the asymptotic performance of Bayesian estimators in the reduced rank regression model under a general prior π(M,N) that has a compactly supported and infinitely differentiable density. Clearly, the priors aforementioned do not fit the compact support assumption. The question wether algorithmically tractable priors fit this assumption is, to our knowledge, still open. In Section 3

, we propose a non-asymptotic analysis of the prior of

In this section, we provide a theoretical analysis of the Bayesian estimators obtained by using the idea of hierarchical priors of  [SM08b, ZWC+10, BLMK11, PC10]. More precisely, we use exactly the prior of [BLMK11] and provide a theoretical result on the performance of the estimator in the reduced-rank regression model.

Several approaches are available to study the performance of Bayesian estimators: the asymptotic approach based on Bernstein-von-Mises type theorems, see Chapter 10 in [vdV98], and a non-asmptotic approach based on PAC-Bayesian inequalities. PAC-Bayesian inequalities were introduced for classification by [STW97, McA98] but tighter bounds and extentions to regression estimation can be found in [Cat04, Cat07, DT08, DT12, DS12]. In all approaches, the variance of the noise is assumed to be known or at least upper-bounded by a given constant, so we use this framework here. To our knowledge, this is the first application of PAC-Bayesian bounds to a matrix estimation problem.

for some diagonal matrix

We will make one of the following assumptions on the noise:

Note that (A1) and (A2) are special case of the one in [DT08], the interested reader can replace these assumptions by the more technical condition given in [DT08]. We define

where ^ρλ is the probability distribution given by

Note that in the case where the entries of E are i.i.d. N(0,σ2) then this is the Bayesian posterior, ρ(d(M,N))=π(d(M,N)|Y), when λ=1/(2σ2), and so ^Bλ is the expectation under the posterior. However, for theoretical reasons, we have to consider slightly smaller λ to prove theoretical results.

where we remind that p∨m=max(p,m). When rank(X)=p, we can see that we recover the same upper bound as in [BSW11], up to a log(ℓ(p∨m)) term. This rate (without the log) is known to be optimal, see [BSW11] remark (ii) p. 1293 and [RT11]. However, the presence of the terms ∥M∥2F and ∥N∥2F can lead to suboptimal rates in less classical asymptotics where ∥B∥F would grow with the sample size ℓ. In the case of linear regression, a way to avoid these terms is to use heavy-tailed priors as in [DT08, DT12], or compactly supported priors as in [AL11]. However, it is not clear whether this approach would lead to feasible algorithms in matrix estimation problems. This question will be the object of a future work.

We do not claim that the choice b=s22ℓpk2(m2+p2) is optimal in practice. However, from the proof it is clear that our technique requires that b decreases with the dimension of B as well as with the sample size to produce a meaningfull bound. Note that in [BLMK11], there is no theoretical approach for the choice of b, but their simulation study tends to show that b must be very small for MNT to be approximately low-rank.

In all the above mentionned papers on PAC-Bayesian bounds, it is assumed that the variance of the noise is known, or upper-bounded by a known constant. More recently, [AC11] managed to prove PAC-Bayesian inequalities for regression with unknown variance. However, the approach is rather involved and it is not clear whether it can be used in our context. This question will also be addressed in a future work.

First, we state the following result:

where K(ρ,π) stands for the Kullback divergence between ρ and π, K(ρ,π)=∫log(dρdπ)dρ if ρ is absolutely continuous with respect to π and K(ρ,π)=∞ otherwise.

We are now ready to prove our main result.

Let us fix c, M and N. The remaining steps of the proof are to upper-bound the two terms in the r.h.s. Both upper bounds will depend on c, we will optimize on c after these steps to end the proof. We have

and, as ∫μρM,N,c(dμ)=M and ∫νρM,N,c(dν)=N, it is easy to see that integral of the three scalar product vanish. So

Now, we deal with the second term:

By symmetry, we will only bound the first of these two terms. We have

We lower-bound the three factors in the integral in (4) separately. First, note that, on Eκ,