As an automatic method of determining model complexity using the training data alone, Bayesian linear regression provides us a principled way to select hyperparameters. But one often needs approximation inference if distribution assumption is beyond Gaussian distribution. In this paper, we propose a Bayesian linear regression model with Student-t assumptions (BLRS), which can be inferred exactly. In this framework, both conjugate prior and expectation maximization (EM) algorithm are generalized. Meanwhile, we prove that the maximum likelihood solution is equivalent to the standard Bayesian linear regression with Gaussian assumptions (BLRG). The q-EM algorithm for BLRS is nearly identical to the EM algorithm for BLRG. It is showed that q-EM for BLRS can converge faster than EM for BLRG for the task of predicting online news popularity. 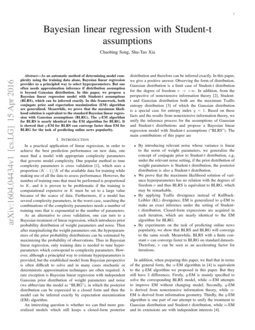 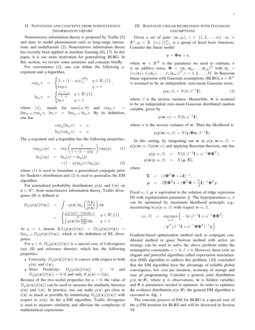 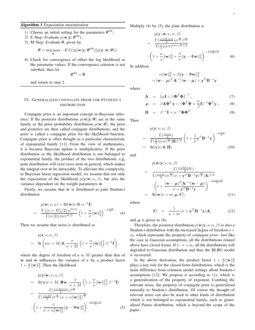 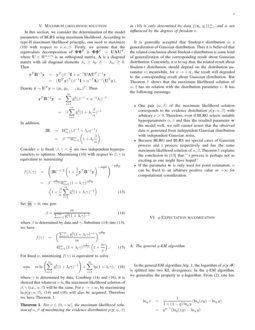 As an alternative to cross validation, one can turn to a Bayesian treatment of linear regression, which introduces prior probability distribution of weight parameters and noise. Then after marginalizing the weight parameters out, the hyperparameters of the prior probability distributions can be estimated by maximizing the probability of observations. Thus in Bayesian linear regression, only training data is needed to tune hyperparameters which correspond to complexity parameters. However, although a principled way to estimate hyperparameters is provided, but the established model from Bayesian perspective is often difficult to solve and in many cases stochastic or deterministic approximation techniques are often required. A rare exception is Bayesian linear regression with independent Gaussian prior distribution of weight parameters and noise (we abbreviate the model as “BLRG”), in which the posterior distribution can be expressed in a closed form and then the model can be inferred exactly by expectation maximization (EM) algorithm.

An interesting question is whether we can find more generalized models which still keeps a closed-form posterior distribution and therefore can be inferred exactly. In this paper, we give a positive answer. Observing the form of distribution, Gaussian distribution is a limit case of Student-t distribution for the degree of freedom

In addition, when preparing this paper, we find that in terms of the general form, the α-EM algorithm in [4] is equivalent to the q-EM algorithm we proposed in this paper. But they still have 3 differences. Firstly, q-EM is mainly specified to solve the corresponding BLRS model, while α-EM attempts to improve EM without changing model. Secondly, q-EM is derived from nonextensive information theory, while α-EM is derived from information geometry. Thirdly, the q-EM algorithm is one part of our attempt to unify the treatment to Gaussian distribution and Student-t distribution, while α-EM and its extensions are with independent interests [4].

. Nonextensive information theory has recently been applied in machine learning

[6], [7]. In this paper, it is our main motivation for generalizing BLRG. In this section, we review some notations and concepts briefly.

For convenience [2], one can define the following q-exponent and q-logarithm,

where (1) is used to formulate a generalized conjugate prior for Student-t distribution and (2) is used to generalize the EM algorithm.

For normalized probability distributions p(x) and t(x) on x∈Rn, from nonextensive information theory, Tsallis divergence [8] is defined as

For q>0, Dq(p(x)∥t(x)) is a special case of f-divergence (see [8] and reference therein), which has the following properties:

Because of the two useful properties for q>0, the value of Dq(p(x)∥t(x)) can be used to measure the similarity between p(x) and t(x). In practice, one can make p(x) get close to t(x) as much as possible by minimizing Dq(p(x)∥t(x)) with respect to p(x). In the q-EM algorithm, Tsallis divergence is used to measure similarity and alleviate the complexity of mathematical expressions.

where w∈RM is the parameter we need to estimate, ϵ is an additive noise, Φ=(ϕ1,ϕ2,…,ϕM)T with ϕi=(ϕi(x1),ϕi(x2),…,ϕi(xm))T,i=1,2,…,M. In Bayesian linear regression with Gaussian assumptions (BLRG), ϵ∈Rm is assumed to be an independent, zero-mean Gaussian noise,

where β is the inverse variance. Meanwhile, w

is assumed to be an independent zero-mean Gaussian distributed random variable, given by

where α is the inverse variance of w. Then the likelihood is

In this setting, by integrating out w in p(y,w;α,β)=p(y|w;α,β)p(w;α) and applying Bayesian theorem, one has

is equivalent to the solution of ridge regression

[9] with regularization parameter αβ. The hyperparamters α,β can be optimized by maximum likelihood principle, e.g., maximizing lnp(y;α,β) with respect to α,β,

Gradient-based optimization method such as conjugate conditional method or quasi Newton method with active set strategy can be used to solve the above problem under the nonnegative constraints α>0,β>0. However, there exist an elegant and powerful algorithm called expectation maximization (EM) algorithm to address this problem. [10]

concluded that the EM algorithm have the advantage of reliable global convergence, low cost per iteration, economy of storage and ease pf programming. Consider a general joint distribution

p(y,w;θ), where y is observations, w is hidden variables and θ is parameters needed to optimize. In order to optimize the evidence distribution p(y;θ), the general EM algorithm is executed in Alg. 1.

The concrete process of EM for BLRG is a special case of the q-EM iteration for BLRS and will be discussed in Section VI.

Conjugate prior is an important concept in Bayesian inference. If the posterior distributions

Firstly, we assume that w is distributed as joint Student-t distribution

Then we assume that noise is distributed as

where the degree of freedom of ϵ is M greater than that of w and w influences the variance of ϵ by a product factor 1+αν∥w∥22. Then the likelihood

In the above derivation, the product factor 1+αν∥w∥22 plays a key role for the closed-form distributions, which is the main difference from common model settings about Student-t assumptions [12]. We propose it according to (1), which is a generalization of the property of exponent. Combing the relevant noise, the property of conjugate prior is generalized naturally to Student-t distribution. Of course the thought of relevant noise can also be used to other kinds of distribution which is not belonged to exponential family, such as generalized Pareto distribution, which is beyond the scope of the paper.

. Firstly, we assume that the eigenvalues decomposition of

is an orthogonal matrix,

Λ is a diagonal matrix with all diagonal elements λ1≥λ2≥⋯λm≥0. Then

Consider ν is fixed. β,γ=βα are two independent hyperparameters to optimize. Maximizing (10) with respect to β,γ is equivalent to minimizing

For fixed ν, minimizing f(γ) is equivalent to solve

For ν∈(0,+∞], the maximum likelihood solution of α,β of maximizing the evidence distribution p(y;α,β) in (10) is only determined by data {(xi,yi)}mi=1 and is not influenced by the degrees of freedom ν.

In the general EM algorithm Alg. 1, the logarithm of p(y;θ) is splitted into two KL divergences. In the q-EM algorithm, we generalize the property to q-logarithm. From (2), one has

Then combing p(y;θ)=p(y,w;θ)p(w|y;θ) and introducing a variational distribution s(w), we have

Just like the standard EM-step [14], [12], but using q-logarithm and Tsallis divergence instead of logarithm and KL divergence, in E-Step, lnqp(y;θ) is optimized with respect to s′′(w), given by

Then in M-Step, lnqp(y;θ) is optimized with respect to θ, given by

Corresponding to Alg. 1, the q-EM algorithm is summarized in Alg. 2.

Compare Alg. 1 and Alg. 2, it is showed that the only difference is that Tsallis divergence is used instead KL divergence in Step 3.

Similar to EM [12], in each iteration, p(y;θ) will not decrease. Therefore, q-EM is also a local minimizer.

In this paper, we mainly use the mean μ of w for point estimation, which is determined only by α,β. Therefore, by Theorem 1, ν can be set to a fixed positive value or +∞ for computational consideration. In the following derivation, ν is set to a positive constant. The case ν→+∞ can be acquired by taking limit.

Before iteration, in Step 1, we should specify some initial values of α,β as αold,βold. Then we apply q-EM to optimize the hyperparameters α,β.

where C=∫pq(w|y;ν,αold,β% old)dw is constant for given αold,βold. Then p′(w) is a normalized Student-t distribution with the degree of freedom ν+m+2. It is deserved to note that only if ν>0, the mean and covariance of p′(w) are both exist. In addition,

By the definition of Tsallis divergence, for q>1, maximizing −Dq(p(w|y;(α)old,(β)old)∥p(y,w;α,β)) with respect to α,β is equivalent to minimizing F(α,β) given by

after arrangement, we have

In (24), it is interesting to see that given b,c, the final update formulation of α,β is identical to the EM update for BLRG [12]. The only difference is in the E step, where the covariance C in (20) has a product factor ν+yTB−1yν+m, which will tend to 1 for ν→+∞. Summarizing the above steps, we give the concrete q-EM iteration for BLRS in Alg. 3.

In many regression tasks, the number of features are much less than the number of training samples, i.e., M≪m. In order to reduce the computational complexity in each step as much as possible, we reformulate the steps in Alg. 3. Before iteration, we give eigenvalues decomposition of ΦTΦ as

where the time cost is O(M3) and compute

where the time costs are O(mM), O(M2), and O(m) respectively. Then in each iteration,

where the time cost is O(M2). Then