In industrial machine learning pipelines, data often arrive in parts. Particularly in the case of deep neural networks, it may be too expensive to train the model from scratch each time, so one would rather use a previously learned model and the new data to improve performance. However, deep neural networks are prone to getting stuck in a suboptimal solution when trained on only new data as compared to the full dataset. Our work focuses on a continuous learning setup where the task is always the same and new parts of data arrive sequentially. We apply a Bayesian approach to update the posterior approximation with each new piece of data and find this method to outperform the traditional approach in our experiments. 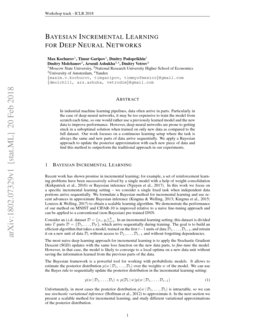 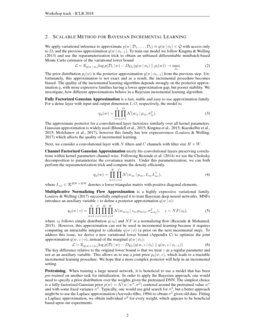 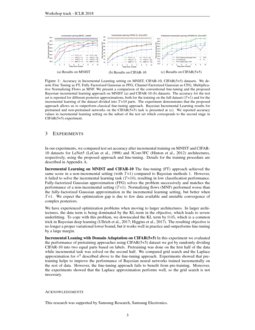 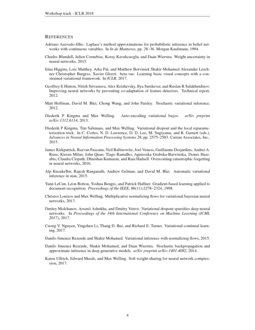 Collaborative Method for Incremental Learning on Classification and Generation

One of the fundamental limitations of Deep Neural Networks (DNN) is its ...
Xinyu Wei, et al. ∙

How To Train Your Program

DetAIL : A Tool to Automatically Detect and Analyze Drift In Language

Recent work has shown promise in incremental learning; for example, a set of reinforcement learning problems have been successively solved by a single model with a help of weight consolidation

(Nguyen et al., 2017). In this work we focus on a specific incremental learning setting – we consider a single fixed task when independent data portions arrive sequentially. We formulate a Bayesian method for incremental learning and use recent advances in approximate Bayesian inference (Kingma & Welling, 2013; Kingma et al., 2015; Louizos & Welling, 2017) to obtain a scalable learning algorithm. We demonstrate the performance of our method on MNIST and CIFAR-10 is improved relative to a naive fine-tuning approach and can be applied to a conventional (non-Bayesian) pre-trained DNN.

Consider an i.i.d. dataset D={xi,yi}Ni=1. In an incremental learning setting, this dataset is divided into T parts D={D1,…,DT}, which arrive sequentially during training. The goal is to build an efficient algorithm that takes a model, trained on the first t−1 units of data D1,…,Dt−1, and retrain it on a new unit of data Dt without access to D1,…,Dt−1 and without forgetting dependencies.

The most naive deep learning approach for incremental learning is to apply the Stochastic Gradient Descent (SGD) updates with the same loss function on the new data parts, to

fine-tune the model. However, in that case, the model is likely to converge to a local optima on a new data unit without saving the information learned from the previous parts of the data.

The Bayesian framework is a powerful tool for working with probabilistic models. It allows to estimate the posterior distribution

p(w|D1,…,Dt) over the weights w of the model. We can use the Bayes rule to sequentially update the posterior distribution in the incremental learning setting:

We apply variational inference to approximate p(w|D1,…,Dt)≈q(w|ϕt)∈Q with access only to Dt and the previous approximation q(w|ϕt−1). To train our model we follow Kingma & Welling (2013) and use the reparameterization trick to obtain an unbiased differentiable minibatch-based Monte Carlo estimator of the variational lower bound

Fully Factorized Gaussian Approximation is a fast, stable and easy to use approximation family. For a dense layer with input and output dimension I, O, respectively, the model is:

Next, we consider a convolutional layer with N filters and C channels with filter size H×W.

Channel Factorized Gaussian Approximation nicely fits convolutional layers preserving correlations within kernel parameters channel-wise. Following Rezende et al. (2014) we use the Cholesky decomposition to parameterize the covariance matrix. Under this parameterization, we can both perform the reparameterization trick and compute the density efficiently.

where z0 follows simple distribution q(z0) and NF is a normalizing flow (Rezende & Mohamed, 2015). However, this approximation can not be used in incremental learning because it requires computing an intractable integral to calculate q(w|ϕ) (a prior on the next incremental step). To address this issue, we derive a new variational lower bound (Appendix C) to optimize the joint approximation q(w,z|ϕ), instead of the marginal q(w|ϕt):

The key difference relative to the original lower bound is that we treat z as a regular parameter and not as an auxiliary variable. This allows us to use a joint prior pt(w,z), which leads to a tractable incremental learning procedure. We hope that a more complex posterior will help in an incremental setting.

Pretraining. When training a large neural network, it is beneficial to use a model that has been pre-trained on another task for initialization. In order to apply the Bayesian approach, one would need to specify a prior distribution over the weights given the pretrained DNN. The simplest choice is a fully-factorized Gaussian prior p(w)=N(w|w⋆,σ2) centered around the pretrained value w⋆

and with some fixed variance

σ2. Typically, one would use grid search for σ2, but a better approach might be to use the Laplace approximation (Azevedo-filho, 1994) to obtain σ2 given old data. Fitting a Laplace approximation, we obtain individual σ2 for every weight, which appears to be beneficial based upon our experiments.

In our experiments, we compared test set accuracy after incremental training on MNIST and CIFAR-10 datasets for LeNet5 (LeCun et al., 1998) and 3Conv3FC (Hinton et al., 2012) architectures, respectively, using the proposed approach and fine-tuning. Details for the training procedure are described in Appendix A.

Incremental Learning on MNIST and CIFAR-10 The fine-tuning (FT) approach achieved the same score in a non-incremental setting (with T=1) compared to Bayesian methods 1. However, it failed to solve the incremental learning task (T=10), resulting in low classification performance. Fully-factorized Gaussian approximation (FFG) solves the problem successively and matches the performance of a non-incremental setting (T=1). Normalizing flows (MNF) performed worse than the fully-factorized Gaussian approximation in the incremental learning setting, but better when T=1. We expect the optimization gap is due to few data available and unstable convergence of complex posteriors.

We have experienced optimization problems when moving to larger architectures. In larger architectures, the data term is being dominated by the KL-term in the objective, which leads to severe underfitting. To cope with this problem, we downscaled the KL term by 0.05, which is a common trick in Bayesian deep learning (Ullrich et al., 2017; Higgins et al., 2017). The resulting objective is no longer a proper variational lower bound, but it works well in practice and outperforms fine-tuning by a large margin.

Incremental Leaning with Domain Adaptation on CIFAR(5+5) In this experiment we evaluated the performance of pretraining approaches using CIFAR(5+5) dataset we got by randomly dividing CIFAR-10 into two equal parts based on labels. Pretraining was done on the first half of the data while incremental task was solved on the second half. We compared grid search and the Laplace approximation for σ2 described above to the fine-tuning approach. Experiments showed that pretraining helps to improve the performance of Bayesian neural networks trained incrementally on the rest of data. However, the fine-tuning approach fails to benefit from pre-training. Moreover, the experiments showed that the Laplace approximation performs well, so the grid search is not necessary.

This research was supported by Samsung Research, Samsung Electronics.

slices and perform incremenental training procedure on each of the slices consequently. We use Adam optimizer with default parameters. Optimizer state (e.g. moving moments) is reset before each incremental stage. The predictions of Bayesian models were averaged over 100 samples from the approximate posterior distribution.

Incremental Learning with Pretraining We use the following experiment design on the CIFAR-10 dataset. We split the dataset into two parts. First, we split the CIFAR-10 dataset into two ”CIFAR-5” datasets, with 5 classes in each part (selected at random). We use the first five classes for pretraining, and then apply the incremental learning framework on the second part of the dataset. We call this task CIFAR(5+5). At the initial stage of the experiment we train a neural network on the first dataset in the conventional non-incremental setting. Then we divide the second dataset into T

parts and train an incremental model on each part consequently, as described in the previous sections. Such experiment design allows us to model pretraining on an unrelated task from a similar domain. We use the parameters of the network trained on one dataset to initialize the incremental training procedure on the second dataset. We use networks of the same architecture in both stages of the experiment. We use parameters of convolutional layers learned during the first stage. However, we don’t use the pretrained parameters of the fully-connected layers which produce the network’s predictions since we classify objects into different set of classes on different stages. It is a typical technique, as the convolutional layers tend to extract task-independent features, whereas the fully-connected layers use these features to obtain the prediction.

This section describes the proposed MNF-based approximation (Louizos & Welling (2017)) of the posterior distribution that is suitable for the incremental learning task, and describes the training procedure of this model. Unfortunately, we can’t apply MNFs inference technique for the incremental learning setting. For the variational in incremental learning task we have to estimate DKL(q(w|ϕt)||q(w|ϕt−1)), where q(w|ϕt−1) is the posterior approximation obtained at the previous step of incremental learning. This KL-term is intractable, moreover now we can’t evaluate neither the new variational approximation q(w|ϕ) nor the old one q(w|ϕt−1), as the computation of these distributions requires marginalization over the whole space of latent variables z. Alternative idea is to include latent variables z into the original probabilistic model as a new parameter:

We can approximate the posterior p(w,z|D)≈q(w,z) via optimization of the variational lower bound:

For simplicity we use notation as in (10). We can expand the data term and rewrite in in the following form:

For a fully-connected layer it is equivalent to the following sampling scheme:

Here the denotation NF stands for the Normalizing Flow. Instead of sampling weights directly, we can apply the local reparameterization trick described by Louizos & Welling (2017), which concludes the computation of the data term.

Now we need to calculate the KL divergence term. We can rewrite it in the following way:

is essentially a cross-entropy between two normal distributions and it can be computed analytically. The expectation

Eq(z)log˜q(z) can be efficiently sampled, as the log-density log˜q(z) is computed analytically as the log-density of a Normalizing Flow. Now we need to compute the expectation −Eq(w,z)logq(w,z). It can be written in the following form:

We can remove the expectation w.r.t. the distribution q(z) in the first term, as the entropy of normal distribution q(wij|zi)=N(wij|ziμij,σ2ij) depends only on its variance σ2ij and does not depend on zi. Therefore we have

The first term is computed analytically and the second term can be easily sampled using the log-density, computed by the Normalizing Flow. Therefore if we use the joint model q(w,z) instead of the marginalized model q(w)=∫q(w|z)q(z)dz, we do not need to perform the nested variational inference procedure.

The only things left are to write down the cross-entropy of two normal distributions q(w|z) and ˜q(w|z), the entropy of q(w|z) and sampling procedures for Eq(z)logq(z) and Eq(z)log˜q(z).

These estimators can be differentiated w.r.t. the Normalization Flow parameters to obtain an unbiased gradient estimate.

This concludes the definition of the MNF approximation for the Bayesian incremental learning procedure.

Discussion of the model