Identifying small subsets of features that are relevant for prediction and/or classification tasks is a central problem in machine learning and statistics. The feature selection task is especially important, and computationally difficult, for modern datasets where the number of features can be comparable to, or even exceed, the number of samples. Here, we show that feature selection with Bayesian inference takes a universal form and reduces to calculating the magnetizations of an Ising model, under some mild conditions. Our results exploit the observation that the evidence takes a universal form for strongly-regularizing priors --- priors that have a large effect on the posterior probability even in the infinite data limit. We derive explicit expressions for feature selection for generalized linear models, a large class of statistical techniques that include linear and logistic regression. We illustrate the power of our approach by analyzing feature selection in a logistic regression-based classifier trained to distinguish between the letters B and D in the notMNIST dataset. 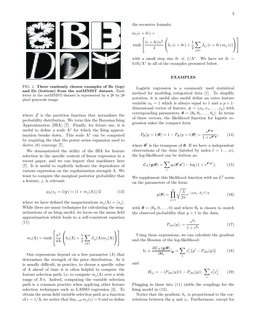 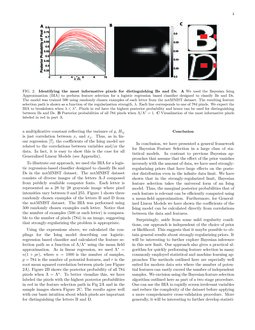 For concreteness, consider a series of n independent observations of some dependent variable y, i.e. y=(y1,…,yn), that we want to explain using a set of p potential features x=(x1,…,xp). Furthermore, assume that to each of these potential features, xi, we associate a model parameter θi. Let S denote an index set specifying the positions j for which sj=+1. The cardinality of S, i.e. the number of indicator variables with sj=+1, is denoted M

. Also, we define a vector

In addition to the log-likelihood, we need to specify prior distributions for the parameters. Here, we will work with factorized priors of the form

where λ is a parameter that controls the strength of the regularization, f(θj) is a twice differentiable convex function minimized at the point ¯θj with f(¯θj)=0, and Z(λ) is the normalization constant. As the function is convex, we are assuming that the second derivative evaluated at ¯θj, denoted ∂2f, is positive. Many commonly used priors take this form including Gaussian and hyperbolic priors. Plugging these expressions into (2), yields an expression for the evidence when only the subset of features, S, are included:

By definition, this integral is dominated by the second term for strongly regularizing priors. Since the log-likelihood is extensive in the number of data points, n, this generally requires that the regularization strength be much larger than the number of data points, λ≫n. For such strongly regularizing priors we can perform a saddle-point approximation for the evidence. This yields, up to an irrelevant constant,

where Λ=λ(∂2f) is a “renormalized” regularization strength,

is the gradient of the log-likelihood, and

is the Hessian of the log-likelihood, with all derivatives evaluated at ^θj=¯θj. We emphasize that the large parameter in our saddle-point approximation is the regularization strength Λ≫n. This differs from previous statistical physics approaches to Bayesian feature selection that commonly assume that n≫Λ and hence perform a saddle point in n Kinney and Atwal (2014); Balasubramanian (1997); Nemenman and Bialek (2002). The fundamental reason for this difference is that we work in the strongly-regularizing regime where the prior is assumed to be important even in the infinite data limit.

Since for strongly-regularizing priors, Λ is the largest scale in the problem, we can expand the log in (5) in a power series expansion in ϵ=Λ−1 to order O(ϵ3) to get:

One of the most striking aspects of this expression is that it is independent of the detailed form of the prior function, f(θ). All that is required is that the prior is a twice differential convex function with a global minimum at f(¯θj)=0. Different choices of prior simply “renormalize” the effective regularization strength Λ.

Rewriting this expression in terms of the spin variables, s, we see that the evidence takes the Ising form with:

and couplings given by:

Notice that the couplings, which are proportional to the small parameter ϵ, are weak. According to Bayes rule, L(y|s)=L(s|y)+constant, so the posterior probability of a set of features s is described by an Ising model of the form:

is the partition function that normalizes the probability distribution. We term this the Bayesian Ising Approximation (BIA)

We demonstrated the utility of the BIA for feature selection in the specific context of linear regression in a recent paper, and we can import that machinery here Fisher and Mehta (2014). It is useful to explicitly indicate the dependence of various expression on the regularization strength Λ. We want to compute the marginal posterior probability that a feature, j, is relevant:

where we have defined the magnetizations mj(Λ)=⟨sj⟩. While there are many techniques for calculating the magnetizations of an Ising model, we focus on the mean field approximation which leads to a self-consistent equation Opper and Winther (2001):

Our expressions depend on a free parameter (Λ) that determines the strength of the prior distribution. As it is usually difficult, in practice, to choose a specific value of Λ ahead of time it is often helpful to compute the feature selection path; i.e. to compute mj(Λ) over a wide range of Λ

’s. Indeed, computing the variable selection path is a common practice when applying other feature selection techniques such as LASSO regression

Tibshirani (1996). To obtain the mean field variable selection path as a function of ϵ=1/Λ, we notice that limϵ→0mj(ϵ)=0 and so define the recursive formula:

with a small step size δϵ≪1/Λ∗. We have set δϵ=0.05/Λ∗ in all of the examples presented below.

Logistic regression is a commonly used statistical method for modeling categorical data Bishop et al. (2006). To simplify notation, it is useful also useful define an extra feature variable x0=1 which is always equal to 1 and a p+1-dimensional vector of feature, x=(x0,x1,…,xp) with corresponding parameters, θ=(θ0,θ1,…,θp). In terms of these vectors, the likelihood function for logistic regression takes the compact form

where θ′ is the transpose of θ. If we have n independent observations of the data (labeled by index l=1…n), the log-likelihood can be written as:

We supplement this likelihood function with an L2 norm on the parameters of the form:

Using these expressions, we can calculate the gradient and the Hessian of the log-likelihood:

Plugging in these into (11) yields the couplings for the Ising model in (12).

Notice that the gradient, bi, is proportional to the correlations between the y and xi

. Furthermore, except for a multiplicative constant reflecting the variance of

y, Hij is just correlation between xi and xj. Thus, as in linear regression Fisher and Mehta (2014), the coefficients of the Ising model are related to the correlations between variables and/or the data. In fact, it is easy to show this is the case for all Generalized Linear Models (see Appendix).

To illustrate our approach, we used the BIA for a logistic regression-based classifier designed to classify Bs and Ds in the notMNIST dataset. The notMNIST dataset consists of diverse images of the letters A-J composed from publicly available computer fonts. Each letter is represented as a 28 by 28 grayscale image where pixel intensities vary between 0 and 255. Figure 1 shows three randomly chosen examples of the letters B and D from the notMNIST dataset. The BIA was performed using 500 randomly chosen examples each letter. Notice that the number of examples (500 or each letter) is comparable to the number of pixels (784) in an image, suggesting that strongly-regularizing the problem is appropriate.

Using the expressions above, we calculated the couplings for the Ising model describing our logistic-regression based classifier and calculated the feature selection path as a function of Λ/Λ∗ using the mean field approximation. As in linear regression, we used Λ∗=n(1+pr), where n=1000 is the number of samples, p=784 is the number of potential features, and r is the root mean squared correlation between pixels (see Figure 2A). Figure 2B shows the posterior probability of all 784 pixels when Λ=Λ∗. To better visualize this, we have labeled the pixels with the highest posterior probabilities in red in the feature selection path in Fig 2A and in the sample images shown Figure 2C. The results agree well with our basic intuition about which pixels are important for distinguishing the letters B and D.

In conclusion, we have presented a general framework for Bayesian Feature Selection in a large class of statistical models. In contrast to previous Bayesian approaches that assume that the effect of the prior vanishes inversely with the amount of data, we have used strongly-regularizing priors that have large effects on the posterior distribution even in the infinite data limit. We have shown that in the strongly-regularized limit, Bayesian feature selection takes the universal form of an Ising model. Thus, the marginal posterior probabilities that of each feature is relevant can be efficiently computed using a mean-field approximation. Furthermore, for Generalized Linear Models we have shown the coefficients of the Ising model can be calculated directly from correlations between the data and features.

Surprisingly, aside from some mild regularity conditions, our approach is independent of the choice of prior or likelihood. This suggests that it maybe possible to obtain general results about strongly-regularizing priors. It will be interesting to further explore Bayesian inference in this new limit. Our approach also gives a practical algorithm for quickly performing feature selection in many commonly employed statistical and machine learning approaches The methods outlined here are especially well suited for modern data sets where the number of potential features can vastly exceed the number of independent samples. We envision using the Bayesian feature selection algorithm outlined here as part of a two stage procedure. One can use the BIA to rapidly screen irrelevant variables and reduce the complexity of the dataset before applying a more comprehensive cross-validation procedure. More generally, it will be interesting to further develop statistical physics based approaches for the analysis of complex data.

where T(y) is a vector of sufficient statistics, and the η are called natural parameters. Notice, that for these distributions, we have that

In a GLM, we restrict ourselves to distribution to scalar quantities where T(y)=y and say that η=θ′x. Then, we can write the likelihood as

where ⟨y⟩¯θ is the expectation value of y for choice of parameter θ=¯θ. If we choose ¯θ to reproduce the empirical probability we get:

Moreover, the entries of the Hessian are given by:

If we consider standardized variables, x, then we can write: