Bayesian estimation and prediction for mixtures 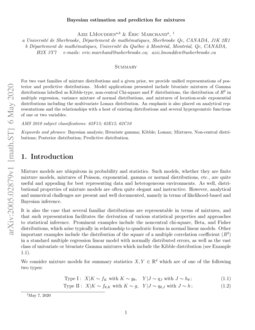 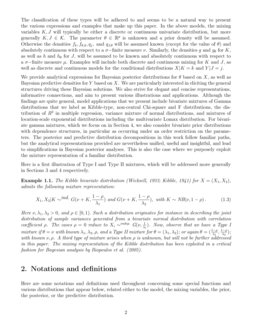 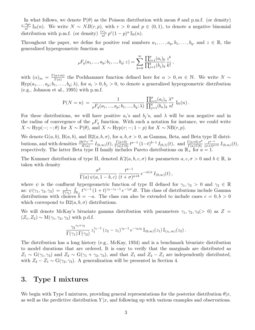 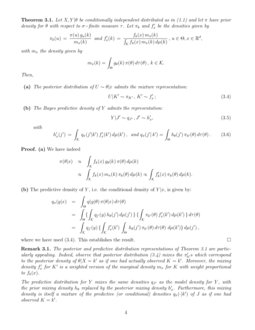 Mixture models are ubiquitous in probability and statistics. Such models, whether they are finite mixture models, mixtures of Poisson, exponential, gamma or normal distributions, etc., are quite useful and appealing for best representing data and heterogeneous environments. As well, distributional properties of mixture models are often quite elegant and instructive. However, analytical and numerical challenges are present and well documented, namely in terms of likelihood-based and Bayesian inference.

It is also the case that several familiar distributions are representable in terms of mixtures, and that such representation facilitates the derivation of various statistical properties and approaches to statistical inference. Prominent examples include the noncentral chi-square, Beta, and Fisher distributions, which arise typically in relationship to quadratic forms in normal linear models. Other important examples include the distribution of the square of a multiple correlation coefficient (R2) in a standard multiple regression linear model with normally distributed errors, as well as the vast class of univariate or bivariate Gamma mixtures which include the Kibble distribution (see Example 1.1).

We consider mixture models for summary statistics X,Y∈Rd which are of one of the following two types:

The classification of these types will be adhered to and seems to be a natural way to present the various expressions and examples that make up this paper. In the above models, the mixing variables K,J will typically be either a discrete or continuous univariate distribution, but more generally K,J∈K. The parameter θ∈Rp is unknown and a prior density will be assumed. Otherwise the densities fk,fθ,k,qj, and qJ,θ will be assumed known (except for the value of θ) and absolutely continuous with respect to a σ−finite measure ν. Similarly, the densities g and gθ for K, as well as h and hθ for J, will be assumed to be known and absolutely continuous with respect to a σ−finite measure μ. Examples will include both discrete and continuous mixing for K and J, as well as discrete and continuous models for the conditional distributions X|K=k and Y|J=j.

We provide analytical expressions for Bayesian posterior distributions for θ based on X, as well as Bayesian predictive densities for Y based on X. We are particularly interested in eliciting the general structures driving these Bayesian solutions. We also strive for elegant and concise representations, informative connections, and aim to present various illustrations and applications. Although the findings are quite general, model applications that we present include bivariate mixtures of Gamma distributions that we label as Kibble-type, non-central Chi-square and F distributions, the distribution of R2 in multiple regression, variance mixture of normal distributions, and mixtures of location-scale exponential distributions including the multivariate Lomax distribution. For bivariate gamma mixtures, which we focus on in Section 4, we also consider bivariate prior distributions with dependence structures, in particular as occurring under an order restriction on the parameters. The posterior and predictive distribution decompositions in this work follow familiar paths, but the analytical representations provided are nevertheless unified, useful and insightful, and lead to simplifications in Bayesian posterior analyses. This is also the case where we purposely exploit the mixture representation of a familiar distribution.

Here is a first illustration of Type I and Type II mixtures, which will be addressed more generally in Sections 3 and 4 respectively.

ρ. The cases ρ=0 reduce to Xi∼indep.G(ν,1λi). Now, observe that we have a Type I mixture if θ=ν with known λ1,λ2,ρ, and a Type II mixture for θ=(λ1,λ2); or again θ=(1−ρλ1,1−ρλ2); with known ν,ρ. A third type of mixture arises when ρ is unknown, but will not be further addressed in this paper. The mixing representation of the Kibble distribution has been exploited in a critical fashion for Bayesian analysis by Iliopoulos et al. (2005).

Here are some notations and definitions used throughout concerning some special functions and various distributions that appear below, related either to the model, the mixing variables, the prior, the posterior, or the predictive distribution.

In what follows, we denote P(θ)

as the Poisson distribution with mean

, to denote a negative binomial distribution with p.m.f. (or density)

Throughout the paper, we define for positive real numbers a1,…,ap,b1,…,bq, and z∈R, the generalized hypergeometric function as

For these distributions, we will have positive ai’s and bj’s, and λ will be non negative and in the radius of convergence of the pFq function. With such a notation for instance, we could write X∼Hyp(−;−;θ) for X∼P(θ), and X∼Hyp(r;−;1−p) for X∼NB(r,p).

The Kummer distribution of type II, denoted K2(a,b,c,σ) for parameters a,c,σ>0 and b∈R, is taken with density

where ψ is the confluent hypergeometric function of type II defined for γ1,γ3>0 and γ2∈R as: ψ(γ1,γ2,γ3)=1Γ(γ1)∫R+tγ1−1(1+t)γ2−γ1−1e−γ3tdt. This class of distributions include Gamma distributions with choices b=−a. The class can also be extended to include cases c=0,b>0 which correspond to B2(a,b,σ) distributions.

The distribution has a long history (e.g., McKay, 1934) and is a benchmark bivariate distribution to model durations that are ordered, It is easy to verify that the marginals are distributed as Z1∼G(γ1,γ3) and Z2∼G(γ1+γ2,γ3), and that Z1 and Z2−Z1 are independently distributed, with Z2−Z1∼G(γ2,γ3). A generalization will be presented in Section 4.

We begin with Type I mixtures, providing general representations for the posterior distribution θ|x, as well as the predictive distribution Y|x, and following up with various examples and observations.

Let X,Y|θ be conditionally independent distributed as in (1.1) and let π have prior density for θ with respect to σ−finite measure τ. Let πk and f′x be the densities given by

with mπ the density given by

Proof. (a) We have indeed

where we have used (3.4). This establishes the result. ∎

The posterior and predictive distribution representations of Theorem

3.1 are particularly appealing. Indeed, observe that posterior distribution (3.4) mixes the π′k′s which correspond to the posterior density of θ|X=k′ as if one had actually observed K=k′. Moreover, the mixing density f′x for K′ is a weighted version of the marginal density mπ for K with weight proportional to fk(x).

corresponds to a non-central chi-square distribution with

to a non-central Beta distribution with shape parameters

Observe that the above generalized hypergeometric distribution reduces to a P(x2(1+b)) distribution for a=p/2. The posterior expectation can be evaluated with the help its mixture representation and standard calculations involving the above p.m.f. One obtains

For the two other cases, we obtain the mixing power series densities:

with the former being the Bayes predictive density of J′∼P(θ) based on K′∼P(θ) and prior θ∼G(a,b). Alternatively represented, the mixing p.m.f. for J′ may be expressed as

which also can be viewed directly as a weighted NB(a,1+b2+b) p.m.f.

The non-central Beta and Fisher distributions are similar. For instance, in the former case with X and Y identically distributed with Y|J∼B(p/2+J,q/2) and J∼P(θ), predictive densities associated with G(a,b) priors are also distributed as mixtures

For the mixing p.m.f. of J′, a development as above yields the expression:

Such a distribution arises naturally as a multiple of the ratio of two independent noncentral chi-squared distributions, and reduces to a non-central F for θ2=0. Consider now the application of Theorem 3.1 for the prior θi∼indep.G(ai,bi),i=1,2, with a1,a2,b1,b2>0, yielding the familiar distributional results:

Representation (3.4) tells us that the posterior distribution of (θ1,θ2) is a mixture of the πK’s with mixing density

We point out that, if the distribution of Y is non-identical to that of X with associated degrees of freedom ν′1 and ν′2, the only change in the previous expression is to replace the νi’s by the ν′i’s for the distribution of Y|J′. Similar observations apply to the other examples of this section.

Consider univariate Gamma mixtures with X|K∼G(α,K) in model (1.1), with the mixing distribution K|θ∼G(a,θ) and prior θ∼G(c,b), with known α,a,b,c. Theorem 3.1 applies and tells us that the posterior distribution θ|x is a mixture of πK′∼G(a+c,K′+b) making use of a familiar posterior distribution for gamma models with gamma priors. In evaluating the mixing density f′x of K′ given in (3.4), it is easy to verify that mπ∼B2(a,c,b) and one thus obtains

which corresponds to a Kummer K2(a+α,c−α,bx,b) distribution as defined in Section 2.

Now consider the Bayesian predictive density for the Gamma mixture Y|J∼G(α′,J) and J|θ∼G(a′,θ), which includes the particular case of identically distributed Y and X for α′=α and a′=a. Observe that the density qπ(⋅|k′) is that of J|K=k′ for the set-up J|θ∼G(a′,θ), K|θ∼G(a,θ) independently distributed, and with θ∼G(c,b). A calculation (e.g., Aitchison & Dunsmore, 1975) yields qπ(⋅|k′)∼B2(a′,a+c,b+k′). With the above, it follows from Theorem 3.1 that the predictive distribution for Y admits the representation:

An alternative representation comes from simply evaluating the marginal density h′x of J′. A calculation gives:

with ψ the confluent hypergeometric function of type II as defined in Section 2.

The final application of Theorem 3.1 concerns the coefficient of determination in a standard multiple regression context.

Consider a coefficient of determination X=R21, or square of a multiple correlation coefficient, that arises for a sample of size n from Z=(Z1,…,Zm)⊤, with n1>m>1, and the regression of Z1 based on Z2,…,Zm. For more details on the underlying distributional theory, see for instance Muirhead (1982). It is well known that the distribution of X is a Type I mixture (1.1) with

with θ=ρ2 is the theoretical squared multiple correlation coefficient. As in Marchand (2001), a convenient prior on θ is a Beta prior and it leads along with the negative binomial distributed K to a conjugate posterior. Specifically, we obtain for θ∼B(a,b) the posterior density πK∼B(a+K,b+(n1−1)/2), as well as the marginal p.m.f.

Theorem 3.1 tells us that the posterior distribution θ|x is a mixture of the πk’s with mixing

The result, which we have derived from the general context of Theorem 3.1 was obtained by Marchand (2001) in this specific set-up. In doing so, he defined such Beta mixtures as HyperBeta and also provided several graphs of prior-posterior densities for varying prior parameters a,b, sample size n, and observed values of X.