Bayesian decision-theoretic design of experiments under an alternative model

Decision-theoretic Bayesian design of experiments is considered when the statistical model used to perform the analysis is different to the model a-priori used to design the experiment. Closed form results and large sample approximations are derived for the special case of normal linear models and for general cases, respectively. These are compared to the case when the fitted and designer models are identical. 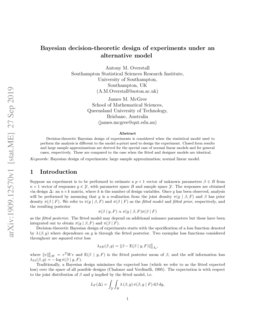 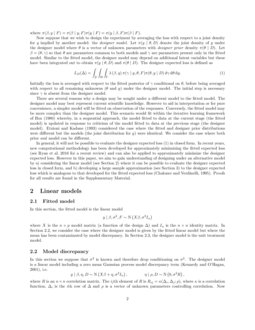 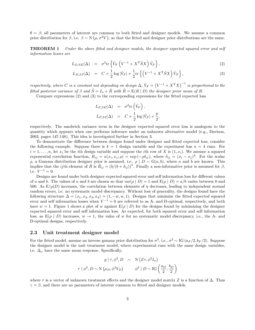 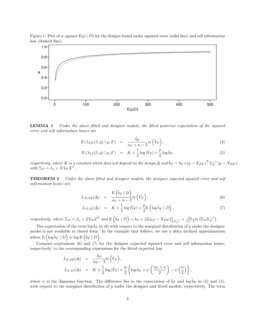 A Bayesian design is given by maximising the expected utility over the d...
Antony M. Overstall, et al. ∙

Farrington-Manning in the Extreme Case

Suppose an experiment is to be performed to estimate a

p×1vector of unknown parameters β∈B from n×1 vector of responses y∈Y, with parameter space B and sample space Y. The responses are obtained via design Δ: an n×k matrix, where k is the number of design variables. Once y has been observed, analysis will be performed by assuming that y is a realization from the joint density π(y∣β,F) and β has prior density π(β∣F). We refer to π(y∣β,F) and π(β∣F) as the fitted model and fitted prior, respectively, and the resulting posterior

as the fitted posterior. The fitted model may depend on additional nuisance parameters but these have been integrated out to obtain π(y∣β,F) and π(β∣F).

λ(β,y) where dependence on y is through the fitted posterior. Two exemplar loss functions considered throughout are squared error loss

where ∥v∥22,W=vTWv and E(β∣y,F) is the fitted posterior mean of β, and the self information loss λSI(β,y)=−logπ(β∣y,F).

Traditionally, a Bayesian design minimizes the expected loss (which we refer to as the fitted expected loss) over the space of all possible designs (Chaloner and Verdinelli, 1995)

. The expectation is with respect to the joint distribution of

β and y implied by the fitted model, i.e.

There are several reasons why a design may be sought under a different model to the fitted model. The designer model may best represent current scientific knowledge. However to aid in interpretation or for pure convenience, a simpler model will be fitted on observation of the responses. Conversely, the fitted model may be more complex than the designer model. This scenario would fit within the iterative learning framework of Box (1980) whereby, in a sequential approach, the model fitted to data at the current stage (the fitted model) is updated in response to criticism of the model fitted to data at the previous stage (the designer model). Etzioni and Kadane (1993) considered the case where the fitted and designer prior distributions were different but the models (the joint distribution for y) were identical. We consider the case where both prior and model can be different.

In this section, the fitted model is the linear model

In this section we suppose that σ2 is known and therefore drop conditioning on σ2. The designer model is a linear model including a zero mean Gaussian process model discrepancy term (Kennedy and O’Hagan, 2001), i.e.

Under the above fitted and designer models, the designer expected squared error and self information losses are

respectively, where C is a constant not depending on design Δ, ^VF=(V−1+XTX)−1

is proportional to the fitted posterior variance of

respectively. The sandwich variance term in the designer expected squared error loss is analogous to the quantity which appears when one performs inference under an unknown alternative model (e.g., Davison, 2003, pages 147-148). This idea is investigated further in Section 3.

To demonstrate the difference between designs found under designer and fitted expected loss, consider the following example. Suppose there is k=1 design variable and the experiment has n=4 runs. For i=1,…,n, let xi be the ith design variable and suppose the ith row of X is (1,xi). We assume a squared exponential correlation function, Rij=κ(xi,xj;ρ)=exp(−ρδij), where δij=(xi−xj)2. For the scalar ρ

, a Gamma distribution designer prior is assumed, i.e.,

For the fitted model, assume an inverse gamma prior distribution for σ2, i.e., σ2∼IG(aF/2,bF/2). Suppose the designer model is the unit treatment model, where experimental runs with the same design variables, i.e. Δi, have the same mean response. Specifically,

where τ is a vector of unknown treatment effects and the designer model matrix Z is a function of Δ. Thus γ=β, and there are no parameters of interest common to fitted and designer models.

Under the above fitted and designer models, the fitted posterior expectation of the squared error and self information losses are

respectively, where K is a constant which does not depend on the design Δ and ^bF=bF+(y−XμF)TΣ−1F(y−XμF) with ΣF=In+XVFXT.

Under the above fitted and designer models, the designer expected squared error and self information losses are

The expectation of the term log^bF in (6) with respect to the marginal distribution of y under the designer model is not available in closed form. In the example that follows, we use a delta method approximation where E(log^bF∣D)≈logE(^bF∣D).

Compare expressions (6) and (7) for the designer expected squared error and self information losses, respectively, to the corresponding expressions for the fitted expected loss

where ψ is the digamma function. The difference lies in the expectation of ^bF and log^bF in (4) and (5), with respect to the marginal distribution of y under the designer and fitted models, respectively. The term ^bF summarizes lack of fit (O’Hagan and Forster, 2004, page 319) of the fitted model so it is natural that the expectation of this quantity (or a function thereof) drives the difference between designer and fitted expected losses.

To demonstrate this difference, we consider Example 1 from Gilmour and Trinca (2012) involving an experiment with n=16 runs and k=3 design variables. The fitted model is a second-order model including an intercept, three first-order terms, three quadratic terms and three pairwise interactions, i.e. p=10. For the fitted model, we assume a non-informative improper prior for β, i.e., μF=0, V−1F=0, aF=0 and bF=0. For the unit treatment model, we assume that μD=0. We do however need to choose a positive-definite prior scale matrix VD for the designer expected loss to exist. We choose the unit information specification (Smith and Spiegelhalter, 1980) which is commonly used to represent prior ignorance but still leads to a proper prior. Under this prior, VD=n(ZTZ)−1.

where HX=X(XTX)−1XT and HZ=Z(ZTZ)−1ZT. Similarly, minimizing the delta method approximate designer expected self information loss is equivalent to minimizing

Designs, referred to as AD-optimal and DD-optimal, are found under loss functions (8) and (9), respectively. Additionally, A- and D-optimal designs are found, equivalent to minimizing, respectively

Table 1 shows efficiencies for the four designs found. AD- and DD-efficiency of a design Δ are

and the number of support points is known as pure error degrees of freedom.

Gilmour and Trinca (2012) advocate finding designs that minimize the variance of an estimator of β under the fitted model where σ2 is estimated under the unit treatment model. Taking this approach favours designs that have larger pure error degrees of freedom than standard A- or D-optimal designs. Here it is demonstrated that this is also a consequence of a Bayesian approach having designed under the unit treatment model.

is the Fisher information under the fitted model.

The loss can be approximated by replacing dependence on the fitted posterior by dependence on the approximate fitted posterior (10). First define ~βFD and ~βD to be the values of t that minimize the Kullback-Liebler divergence between the fitted model π(y∣t,F) and a) the fitted model having integrated out γ (the parameters absent from the designer model), and b) the designer model, i.e. ~βFD and ~βD minimize

The following result can now be proved.

A large sample approximation to the designer expected loss is

The tractability of the normal distribution means that the

inner expectation of the approximate loss with respect to g (i.e. ∫^BFλ(β,^βF)g(^βF∣β)d^βF) is often available in closed form. The approximation given by (15) then reduces to the prior expectation of functionals of the Fisher information, and the quantities in (11) to (14). However, the prior of β is formed of two components; the distribution of γ conditional on θ under the fitted prior and then the distribution of θ under the designer prior.

Consider the case where β=θ, i.e. all parameters of interest are present in both models. Under this scenario the following corollary can be proved.

where G is a constant not depending on the design Δ. Note the sandwich variance term appearing in the large sample approximation to the expectation of the squared error loss (16). This is exact in the case when the fitted posterior distribution is normal; see Section 2.2.

The authors would like to thank Prof Dave Woods for initial discussions and feedback.

Supplementary material available at the end of the document includes proofs for all results in the manuscript.

The fitted posterior of β is N(^μF,σ2^VF) where E(β∣y,F)=^μF=^VF(XTy+V−1μ). Under the designer model, integrating out η, gives y∣β,ρ∼N(Xβ,σ2S), where S=In+R. The designer expected squared error and self information losses, conditional on ρ, are

Since tr(⋅) is a linear operator, it is straightforward to take expectations of (S1) and (S2) with respect to the designer prior of R resulting in (2) and (3), respectively.

The fitted posterior of β is

The proof follows from taking the expectation of (4) and (5) with respect to y∣D∼t(ZμD,bDaDΣD,aD), the marginal distribution of y under the designer model.

The posterior distribution, π(γ∣y,θ,F) can be approximated by deriving the conditional distribution of γ given θ from (10) using the usual properties of the normal distribution. The key point is that this distribution only depends on y through ^βF, so we can write

where the last line follows from an application of Bayes’ theorem. Reordering the terms and noting that the expectation with respect to

y can be written as expectation with respect to ^βF gives

respectively, where the last two distributions follow from inference results for the wrong model (e.g., Davison, 2003, pages 147-148). The expression in (15) follows.

The squared error and self information losses are approximated by