In this paper, we introduce a new sparsity-promoting prior, namely, the "normal product" prior, and develop an efficient algorithm for sparse signal recovery under the Bayesian framework. The normal product distribution is the distribution of a product of two normally distributed variables with zero means and possibly different variances. Like other sparsity-encouraging distributions such as the Student's t-distribution, the normal product distribution has a sharp peak at origin, which makes it a suitable prior to encourage sparse solutions. A two-stage normal product-based hierarchical model is proposed. We resort to the variational Bayesian (VB) method to perform the inference. Simulations are conducted to illustrate the effectiveness of our proposed algorithm as compared with other state-of-the-art compressed sensing algorithms. 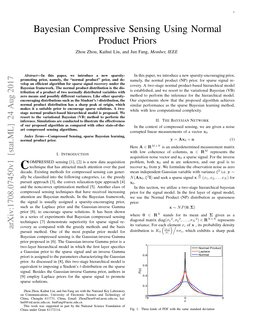 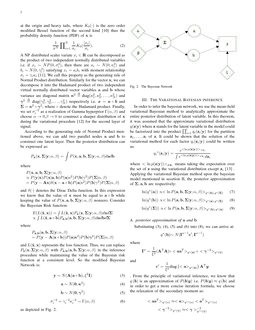 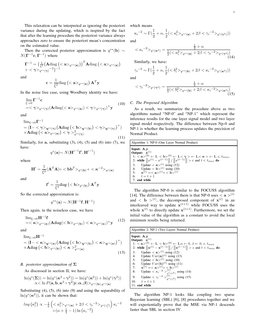 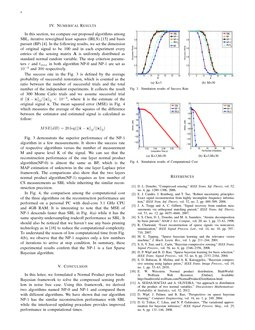 We consider the problem of robust compressed sensing whose objective is ...
Qian Wan, et al. ∙

Sparse Estimation with Generalized Beta Mixture and the Horseshoe Prior

In this paper, the use of the Generalized Beta Mixture (GBM) and Horsesh...
Zahra Sabetsarvestani, et al. ∙

In this work, we formulate the fixed-length distribution matching as a B...
Mohamad Dia, et al. ∙

is a new data acquisition technique that has attracted much attention over the past decade. Existing methods for compressed sensing can generally be classified into the following categories, i.e. the greedy pursuit approach

In this paper, we introduce a new sparsity-encouraging prior, namely, the normal product (NP) prior, for sparse signal recovery. A two-stage normal product-based hierarchical model is established, and we resort to the variational Bayesian (VB) method to perform the inference for the hierarchical model. Our experiments show that the proposed algorithm achieves similar performance as the sparse Bayesian learning method, while with less computational complexity.

In the context of compressed sensing, we are given a noise corrupted linear measurements of a vector

Here A∈RM×N is an underdetermined measurement matrix with low coherence of columns, n∈RM represents the acquisition noise vector and x0 a sparse signal. For the inverse problem, both x0 and n are unknown, and our goal is to recover x0 from y. We formulate the observation noise as zero mean independent Gaussian variable with variance ξ2 i.e. y∼N(Ax0,ξ2I) and seek a sparse signal xΔ=(x1,x2,…xN) for x0.

In this section, we utilize a two-stage hierarchical bayesian prior for the signal model. In the first layer of signal model, we use the Normal Product (NP) distribution as sparseness prior:

where 0∈RN stands for its mean and Σ given as a diagonal matrix diag(σ12,σ22,…,σN2)∈RN×N represents its variance. For each element xi of x

, its probability density distribution is

K0(|xi|σi)/K0(|xi|σi)πσiπσi, which exhibits a sharp peak at the origin and heavy tails, where K0(⋅) is the zero order modified Bessel function of the second kind[10]

A NP distributed scaler variate xi∈R can be decomposed as the product of two independent normally distributed variables i.e. if xi∼NP(0,σ2i), then there are ai∼N(0,κ2i) and bi∼N(0,γ2i) satisfying xi=aibi

σi=γiκi[11]. We call this property as the generating rule of Normal Product distribution. Similarly for the vector x, we can decompose it into the Hadamard product of two independent virtual normally distributed vector variables a and b whose variance are diagonal matrix κ2Δ=diag(κ21,κ22,…,κ2N) and γ2Δ=diag(γ21,γ22,…,γ2N) respectively i.e. x=a∘b and Σ=κ2∘γ2, where ∘ denote the Hadamard product. Finally, we set σ−2i

as a realization of Gamma hyperprior

Γ(α,β) and choose α→0,β→0 to construct a sharper distribution of x during the variational procedure [12] for the second layer of signal.

According to the generating rule of Normal Product mentioned above, we can add two parallel nodes a and b to construct one latent layer. Then the posterior distribution can be expressed as:

and δ(⋅) denotes the Dirac Delta function. In this expression we know that the value of x must be equal to a∘b while keeping the value of P(x,a,b,Σ|y;α,β) nonzero. Consider the Bayesian Risk function:

represents the loss function. Thus, we can replace

in the inference procedure while maintaining the value of the Bayesian risk function at a consistent level. So the modified Bayesian Network is:

In order to infer the bayesian network, we use the mean-field variational Bayesian method to analytically approximate the entire posterior distribution of latent variable. In this theorem, it was assumed that the approximate variational distribution q(z|y) where z stands for the latent variable in the model could be factorized into the product ∏li=1qi(zi|y) for the partition z1,…,zl of z. It could be shown that the solution of the variational method for each factor qi(zi|y) could be written as:

where <lnp(z|y))>≠zi means taking the expectation over the set of z using the variational distribution except zi[13] . Applying the variational Bayesian method upon the bayesian model mentioned in secetion II, the posterior approximation of Σ,a,b are respectively:

Iii-a posterior approximation of a and b

. From the principle of variational inference, we know that q(b) is an approximation of P(b|y) i.e. P(b|y)≈q(b) and in order to get a more concise iteration formula, we choose the relaxation of the secondary moment as:

Then the corrected posterior approximation is q∗∗(b)∼N(Γ−1c,Γ−1) where

In the noise free case, using Woodbury identity we have:

So the corrected approximation is:

Then again, in the noiseless case, we have

As discussed in section II, we have:

As a result, we summarize the procedure above as two algorithms named “NP-0” and “NP-1” which represent the inference results for the one layer signal model and two layer signal model respectively. The difference between Np-0 and NP-1 is whether the learning process updates the precision of Normal Product.

The algorithm NP-0 is similar to the FOCUSS algorithm[14]. The difference between them is that NP-0 uses <a>(t) and <b>(t), the decomposed component of x(t) in an interleaved way to update x(t+1) while FOCUSS uses the whole x(t) to directly update x(t+1). Furthermore, we set the initial value of the algorithm as a constant to avoid the local minimum results being returned.

The algorithm NP-1 looks like coupling two sparse Bayesian learning (SBL) [6, 8] procedures together and we will experientially prove that the MSE via NP-1 descends faster than SBL in section IV.

In this section, we compare our proposed algorithms among SBL, iterative reweighted least squares (IRLS)[15] and basis pursuit (BP)[4]. In the following results, we set the dimension of original signal to be 100 and in each experiment every entries of the sensing matrix A

The success rate in the Fig. 3 is defined by the average probability of successful restoration, which is counted as the ratio between the number of successful trials and the total number of the independent experiments. It collects the result of 300 Monte Carlo trials and we assume successful trial if ∥^x−x∥2/∥^x−x∥2∥x∥2∥x∥2<10−3, where ^x is the estimate of the original signal x. The mean squared error (MSE) in Fig. 4 which measures the average of the squares of the difference between the estimator and estimated signal is calculated as follow:

Fig. 3 demonstrats the superior performance of the NP-1 algorithm in a few measurements. It shows the success rate of respective algorithms versus the number of measurement M and sparse level K of the signal. We can see that the reconstruction performance of the one layer normal product algorithm(NP-0) is almost the same as BP, which is the MAP estimation of unknowns in the one layer Laplace prior framework. The comparisons also show that the two layers normal product algorithm(NP-1) requires as few number of CS measurements as SBL while inheriting the similar reconstruction precision.

In Fig. 4, the comparison among the computational cost of the three algorithms on the reconstruction performance are performed on a personal PC with dual-core 3.1 GHz CPU and 4GB RAM. It is interesting to note that the MSE of NP-1 descends faster than SBL in Fig. 4(a) while it has the same sparsity-undersampling tradeoff performance as SBL. It should also be noticed that we haven’t use any basis pruning technology as in [16] to reduce the computational complexity. To understand the reason of low computational time from Fig. 4(b), we observe that the NP-1 requires only a few numbers of iterations to arrive at stop condition. In summary, these experimental results confirm that the NP-1 is a fast Sparse Bayesian algorithm.

In this letter, we formulated a Normal Product prior based Bayesian framework to solve the compressed sensing problem in noise free case. Using this framework, we derived two algorithms named NP-0 and NP-1 and compared them with different algorithms. We have shown that our algorithm NP-1 has the similar reconstruction performance with SBL while the interleaved updating procedure provides improved performance in computational times.