Bargaining with entropy and energy

Statistical mechanics is based on interplay between energy minimization and entropy maximization. Here we formalize this interplay via axioms of cooperative game theory (Nash bargaining) and apply it out of equilibrium. These axioms capture basic notions related to joint maximization of entropy and minus energy, formally represented by utilities of two different players. We predict thermalization of a non-equilibrium statistical system employing the axiom of affine covariance|related to the freedom of changing initial points and dimensions for entropy and energy|together with the contraction invariance of the entropy-energy diagram. Whenever the initial non-equilibrium state is active, this mechanism allows thermalization to negative temperatures. Demanding a symmetry between players fixes the final state to a specific positive-temperature (equilibrium) state. The approach solves an important open problem in the maximum entropy inference principle, viz. generalizes it to the case when the constraint is not known precisely. 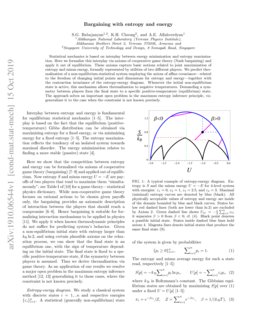 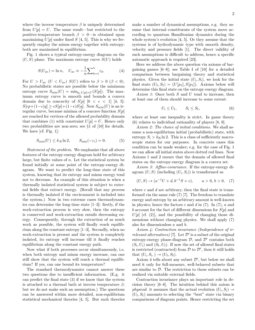 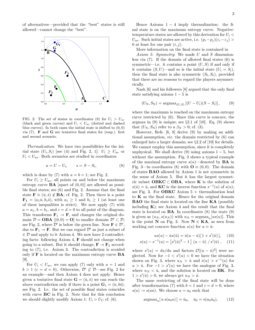 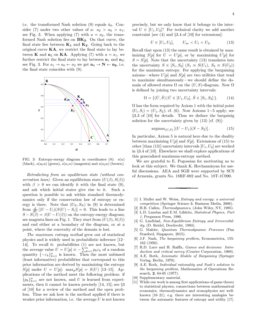 The Path to Nash Equilibrium

It has been proved that every non-cooperative game has a Nash equilibriu...
Sizhong Lan, et al. ∙

Entropy production and thermodynamics of information under protocol constraints

Thermodynamics as Combinatorics: A Toy Theory

We discuss a simple toy model which allows, in a natural way, for derivi...
Ämin Baumeler, et al. ∙

i.1 1. Calculation of the minimum entropy for a fixed average energy

Here we show how to mimimize entropy

for a fixed average energy

Since S[p] is concave, its minimum is reached for vertices of the allowed probability domain. This domain is defined by the intersection of (17) with probabilities that support constraint (18). Put differently, as many probabilities nullify for the minimum of S[p], as allowed by (18). Hence at best only two probabilities are non-zero.

We now order different energies as

and define entropies sij(E), where only states i and j with i<j have non-zero probabilities:

The minimum entropy Smin(E) under (18) is found by looking—for a fixed E—at the minimum over all sij(E) whose argument supports that value of E. E.g. Smin(E) reads from (20) for n=3 (3 different energies):

where (for obvious reasons) the maximization was already restricted to the maximum entropy curve s(u). Now recall that s(u) is a concave function. Local maxima of us(u) are found from [dsdu≡s′(u)]:

We shall now show that this local maximum is unique and hence coincides with the global maximum. For any concave function s(u) we have for u1≠u2

which produces after re-working and using (25) for u≠uN:

Hence uN is the unique global maximum of us(u).

In the main text we emphasized that the derivation of the solution (9) for the axiomatic bargaining problem that was proposed by Nash nash-1 and is reproduced in textbooks luce-1 ; rubin ; roth_book-1 has a serious deficiency. Namely, (9) is derived under an additional assumption, viz. that one can enlarge the domain of allowed state on which the solution is searched for. This is a drawback already in the game-theoretic set-up, because it means that the payoffs of the original game are (arbitrarily) modified. In contrast, restricting the domain of available states can be motivated by forbiding certain probabilistic states (i.e. joint actions of the original game), which can and should be viewed as a possible part of negotiations into which the players engage. For physical applications this assumption is especially unwarranted, since it means that the original (physical) entropy-energy phase diagram is arbitrarily modified.

We now demonstrate on the example of Fig. 4 how specifically this assumption is implemented. Fig. 4 shows an entropy-energy diagram in relative coordinates (8) with s(u) being the maximum entropy curve. The affine transformation were chosen such that the Nash solution (9) coincides with the point (1,1). Now recall (25). Once s(uN)=uN=1, then ds(uN)du=−1, and since s(u) is a concave function, then all allowed states lay below the line 2−u; see Fig. 4. If now one considers a domain of all states (u≥0,s≥0) (excluding the initial point (0,0)) lying below the line 2−u (this is the problematic move!), then (1,1) is the unique solution in that larger domain. Moving back to the original domain and applying the contraction invariance axiom, we get that (1,1) is the solution of the original problem.

i.3 3. Maximum entropy method and its open problem

As a brief reminder: let we do not know probabilities (17), but we happen to known that they hold a constraint:

being realizations of some random variable

U. We refrain from calling U energy (or minus energy), since applications of the method are general.

Now if we know precisely the average U in (29), then unknown probabilities (17) can be recovered from maximizing the entropy (16) under constraint (29). In a well-defined sense this amounts to minimizing the number of assumption to be made additionally for recovering probabilities maxent_action-1 . The outcome of the maximization is well-known and was already given by us in the main text:

where the Lagrange multiplier β is determined from (29).

. Importantly, the method is independent from other inference practices, though it does have relations with Bayesian statistics

But from where we could know U in (29) precisely? This can happen in those (relatively rare) cases when our knowledge is based on some symmetry or a law of nature. Otherwise, we have to know U from a finite number of experiments or—within subjective probability and management science buckley-1 —from an expert opinion. The former method will never provide us with a precise value of U, simply because the number of experiments is finite. Opinions coming from experts do naturally have certain uncertainty, or there can be at least two slightly different expert opinions that are relevant for the decision maker. Thus in all those case we can stick to a weaker form of prior information, viz. that U is known to belong to a certain interval

This problem was recognized by the founder of the method jaynes-2 , who did not offer any specific solution for it. Further studies attempted to solve the problem in several different ways:

– Following Ref. thomas-1 , which studies the entropy maximization under more general type of constraints (not just a fixed average), one can first fix U by (29), calculate the maximum entropy S(U), and then maximize S(U) over U∈[U1,U2], which will mean maximizing entropy (16) under constraint (31). This produces:

Such a solution is not acceptable; e.g. in the regime (32) it does not change when increasing U2. I.e. the solution does not feel the actual range of uncertainty implied in (31).

– What is wrong with the simplest possibility that will state S(U1+U22)—i.e. the maximum entropy at the center of the interval—as the solution to the problem? Taking the arithmetic average of the interval independently from the underlying problem seems arbitrary.

as an unknown parameter, and then apply standard statistical methods for estimating it

– Yet another route for solving the problem was discussed in Ref. jaynes-2 . (We mention this possibility, also because it came out as the first reaction when discussing the above open problem with practioners of the maximum entropy method roger .) It amounts to the situation, where in addition to the empiric mean (36

1M∑Mα=1u2[α] as the second constraint in maximizing (16). It is hoped that since identifying the sample mean (36) with the average U is not sufficiently precise for a finite M, then fixing the second moment will account for this lack of precision. This suggestion was not worked out in detail, but it is clear that it cannot be relevant to the question we are interested in. Indeed, its implementation will amount to fixing two different constraints, i.e. in addition to knowing precisely the average U in (29), it will also fix the second moment U′=∑nk=1u2kpk thereby assuming more information than the precise knowledge of U entails.

i.3.3 3.3 Solving the problem via bargaining

Let us first of all add an additional restriction in (31):

The case Uav>U2 is treated similarly to (37) with obvious generalizations explained below. The general case (31) is more difficult and will be addressed at the end of the next chapter.

We now know that the maximum entropy solution (30) can be recovered also by maximizing U over {pk}nk=1 for a fixed entropy. Note that the uncertainty (37) translates into an uncertainty

We shall take Axiom 1 in a slightly restricted form as compared with its original form (Axiom 1) given by (6) of the main text 111The reason of this restriction is that for being able to deduce thermalization using only the restricted affine-covariance (42), we anyhow need to require the strict inequality Ui<Uf; cf the discussion after (8).

Axioms 2 and 4 go on as stated in the main text. In particular, Axiom 2 ensures that Ω is a convex domain, i.e. that it does not hit the minimum entropy curve.

Axiom 5 will go as stated in the main text and demands symmetry between maximizing S and maximizing U. Altogether, Axioms 1’, 2, 3’, 4 and 5 suffice for deriving

as the solution of the problem with uncertainty interval (37).

i.3.4 3.4 Generalizing the solution to other types of uncertainty intervals

Uncertainty intervals that instead of (37) hold

are straightforward to deal with. Now relevant points on the maximum entropy curve can be reached by entropy maximization for a fixed U=U[p], or minimizing U[p] for a fixed entropy S=S[p]. Hence the initial point and Axiom 1’ now read [cf. (40, 41)]:

Now we do not know a priori whether we should maximize or minimize over U[p].

There is only one case, where solutions (50, 52) become umbiguous:

S2<S1 will lead to (50), which is different as compared with interpolating (52) from S1<S2. Thus we state that under (53) the prior information (48) does not suffice for drawing a unique conclusion with the bargaining method.