Balancing polynomials, Fibonacci numbers and some new series for π

We evaluate some types of infinite series with balancing and Lucas-balancing polynomials in closed form. These evaluations will lead to some new curious series for π involving Fibonacci and Lucas numbers. Our findings complement those of Castellanos from 1986 and 1989. 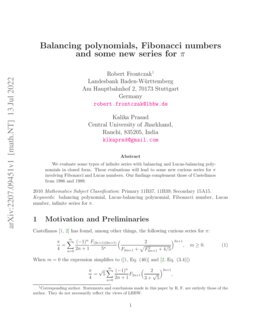 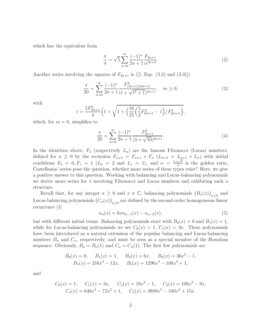 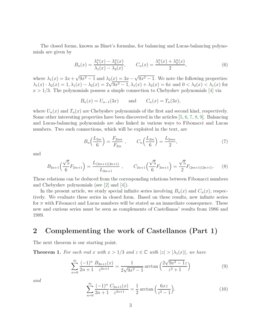 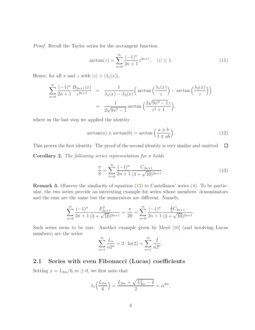 Computers are good at evaluating finite sums in closed form, but there a...
Robert Dougherty-Bliss, et al. ∙

Tropical Laurent series, their tropical roots, and localization results for the eigenvalues of nonlinear matrix functions

The Lagrangian remainder of Taylor's series, distinguishes O(f(x)) time complexities to polynomials or not

The purpose of this letter is to investigate the time complexity consequ...
Nikolaos P. Bakas, et al. ∙

On Polynomial Ideals And Overconvergence In Tate Algebras

In this paper, we study ideals spanned by polynomials or overconvergent ...
Xavier Caruso, et al. ∙

Castellanos [1, 2] has found, among other things, the following curious series for π:

which has the equivalent form

which, for m=0, simplifies to

In the identities above, Fn (respectively Ln) are the famous Fibonacci (Lucas) numbers, defined for n≥0 by the recursion Fn+2=Fn+1+Fn (Ln+2=Ln+1+Ln) with initial conditions F0=0,F1=1 (L0=2 and L1=1), and α=1+√52 is the golden ratio. Castellanos’ series pose the question, whether more series of these types exist? Here, we give a positive answer to this question. Working with balancing and Lucas-balancing polynomials we derive more series for π involving Fibonacci and Lucas numbers and exhibiting such a structure.

The closed forms, known as Binet’s formulas, for balancing and Lucas-balancing polynomials are given by

where Un(x) and Tn(x) are Chebyshev polynomials of the first and second kind, respectively. Some other interesting properties have been discovered in the articles [5, 6, 7, 8, 9]. Balancing and Lucas-balancing polynomials are also linked in various ways to Fibonacci and Lucas numbers. Two such connections, which will be exploited in the text, are

These relations can be deduced from the corresponding relations between Fibonacci numbers and Chebyshev polynomials (see [2] and [4]).

In the present article, we study special infinite series involving Bn(x) and Cn(x), respectively. We evaluate these series in closed form. Based on these results, new infinite series for π with Fibonacci and Lucas numbers will be stated as an immediate consequence. These new and curious series must be seen as complements of Castellanos’ results from 1986 and 1989.

2 Complementing the work of Castellanos (Part 1)

The next theorem is our starting point.

Recall the Taylor series for the arctangent function

where in the last step we applied the identity

This proves the first identity. The proof of the second identity is very similar and omitted. ∎

The following series representation for π holds

Observe the similarity of equation (13) to Castellanos’ series (4). To be particular, the two series provide an interesting example for series whose members’ denominators and the sum are the same but the numerators are different. Namely,

Such series seem to be rare. Another example given by Mező [10] (and involving Lucas numbers) are the series

2.1 Series with even Fibonacci (Lucas) coefficients

Hence, inserting z=F2m+2, we also get the relations

where we have used the Catalan identities

To derive Castellanos-like expressions for π with Fibonacci (Lucas) coefficients, we use (14) and (15), and relate them to special arctan arguments. We start with

But it can be checked easily that for all m≥1

Equation (20) is the first Lucas number counterpart of (1). It is worth to note, that the case m=0 yields

In a similar manner, working with other arguments of the arctan function, we can derive the following presumably new series for π involving even Lucas numbers.

Once more, deriving Castellanos-like expressions for π is fairly simple. We start with

In the same manner other arctan arguments can be analyzed. Interestingly, the careful analysis shows that no series involving odd Lucas numbers will come to appearance. The next theorem contains additional odd-indexed Fibonacci series for

3 Complementing the work of Castellanos (Part 2)

Replacing z in (9) by z/λ1(x) and z/λ2(x), respectively, and combining the terms according to the Binet form gives

Now, we can apply (12) and simplify to end with the following identity involving squares of balancing polynomials

Similarly, the same replacement in (10) gives

None of the roots satisfies the condition for convergence and therefore we can conclude that no such series with B22n+1 exists. Setting x=1 in the above Lucas-balancing identity we obtain

where z∗ is a positive root of the polynomial equation

Here, also all four roots of equation (34) are real

The four roots are given by

Among the four roots we choose the biggest root that satisfies the condition for convergence and arrive at the main theorem.

The analysis of the quartic (39) is very similar. With b=−5F22m the relevant equation becomes

The four roots are given by

These roots can be expressed as