Graph anticoloring problem is partial coloring problem where the main feature is the opposite rule of the graph coloring problem, i.e., if two vertices are adjacent, their assigned colors must be the same or at least one of them is uncolored. In the same way, Berge in 1972 proposed the problem of placing b black queens and w white queens on a n × n chessboard such that no two queens of different color can attack to each other, the complexity of this problem remains open. In this work we deal with the knight piece under the balance property, since this special case is the most difficult for brute force algorithms. 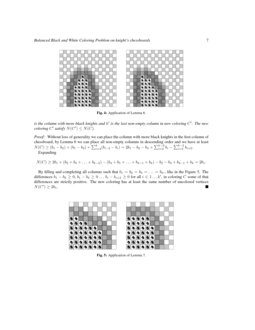 In the problem of 2-coloring without monochromatic triangles (or triangl...
Michał Karpiński, et al. ∙

Fairer Chess: A Reversal of Two Opening Moves in Chess Creates Balance Between White and Black

Unlike tic-tac-toe or checkers, in which optimal play leads to a draw, i...
Steven J. Brams, et al. ∙

Tight Bounds on the Minimum Size of a Dynamic Monopoly

Assume that you are given a graph G=(V,E) with an initial coloring, wher...
Ahad N. Zehmakan, et al. ∙

The Painter's Problem: covering a grid with colored connected polygons

Distributed Graph Coloring: An Approach Based on the Calling Behavior of Japanese Tree Frogs

Graph Anticoloring Problem (GAC) was introduced by Hansen et al. [2] as a generalization of Vertex Separator Problem (VSP), proposed by Lipton and Tarjan in [3] to solve the Problem 1.3 for rooks.

If we limit k=2, we have the Black and White Coloring Problem(BWC), defined as follows:

Lipton and Tarjan solved the Problem 1.3 with rook pieces. Hansen et al. showed that the BWC is NP-complete for general graphs in [2]. Until this work the complexity of Problem 1.3 with knights and queens remained open.

In our case we deal with knight chessboards. One way to answer the Problem 1.3 with knights is to fix the value of b and maximize the size of white knights set. This problem is named Optimization Black and White Coloring Problem for Knights (OBWC-Knights). In [1] Berend et al., proposed the Problem 1.4 over n×n chessboards with each original piece of chess since this special case is the most difficult one. They solved the cases of kings, bishops and towers, as well they proposed two conjectures, one for the case of knights and one for queens. In this work we give a proof for knights case on m×n chessboards.

Input: A m×n chessboard and a type of piece of chess. Output: max{min{b,w}}, of the specified piece.

First, we model the Problem 1.4 as an integer program. Given a m×n chessboard. For each position (i,j) on the board we define the following variables:

where b and w are the number of blacks and whites respectively and N[i,j] is the closed neighborhood of the vertex (i,j). Now we define ϕt(m,n) as the optimal result of the integer program (1 – 7) for the piece t∈{knight, bishop, queen, king, rook}. In [1] Berend et al. proposed the Conjecture 1 for the value of ϕknight(n,n). The left side of Figure 1 shows the case of even n where Conjecture 1

n where the conjecture is not fulfilled.

Given a n×n chessboard. The value of ϕknight(n,n) is:

Conjecture 1 is not true because it is not fulfilled when n is odd and we have a better solution for this case, also the value of ϕ(n,n) does not work with values of n≤6. In the Figure 2 we show a solution for 5×5 chessboard with 10 black and 10 white knights. The solution provided by the Conjecture 1 gives ϕknight(5,5)=5(1)+2=7. The difference is because on 5×5 chessboard there are some positions that can not be reached by knights in one movement.

We can proof a general version of this conjecture in Theorem 1.

The values of ϕknight(1,n) and ϕknight(2,n) are ⌊n2⌋ and n respectively and their proofs are trivial. In the case of m=3,4,5,6 the value of ϕknight(m,n) have a few pathological cases for small values of n and the rest can be solved by the application of Theorem 1 with a few modifications. For example in the case of m=3, n must be greater equal than 7 due with n≤6 there are zones that knights can not reach in one movement.

Given a 3×n chessboard with n≥7, then

Which is the same number of uncolored vertices as in our solution. The odd case is similar. To verify ϕknight(3,n) is the greatest value that is necessary a conclusion like the Theorem 1 shown in the section 3.1.

For the proof of Theorem 1 we use plenty of lemmas, which some of them are easy to verify and their proofs will be omitted.

An empty vertex is a position on chessboard that should not have a knight.

A vertex u is covered by a black knight v if u is uncolored and can be reached by v in one movement.

Let N(C) be the number of vertices that must be uncolored in a coloring C.

An empty block is a set of contiguous empty columns (rows).

If a coloring C has at least one almost full row (column) k and we move a black knight to the uncolored vertex in the almost full column k, the new coloring C′ satisfy N(C′)≤N(C).

Proof: There are two cases in this proof:

Let bk the number of black knights on the column (row) k.

Given a coloring C with b=ϕknight(m,n) black knights. There is a coloring C′ obtained by compacting the all non empty columns and satisfy N(C′)≤N(C).

Proof: We only proof the case where n is even. We suppose that the coloring does not have full or almost full columns because in this case is trivial because of the Lemmas 3 and 4. On the other hand, we choose the column with more black knights, this column must have more than m2 black knights because the size of b. If there was no column with at least that number of knights would have n−2 non-empty columns. In this case the coloring could have more uncolored vertices since m≤n.

A compact coloring C is a coloring where all its columns are compact.

Given a coloring C with b=ϕknight(m,n) black knights. It exists a coloring C′ with at least one full column such that N(C′)≤N(C).

Proof: By the application of Lemmas 3, 4, 5, 6 and 7 a solution is built with a block with N(C)≥2bc1+2br1 where bc1 and br1 are the column and the row with more black knights. Now N(C)≥2(bc1+br1)≥2m. If we fill at least one column the number of uncolored vertices remains equal or decreases until exactly 2m, therefore the new coloring has N(C′)≥2m uncolored vertices and N(C′)≤N(C). ■

Proof: In this case there are two possibilities like in the Figure 6. Let k the last non empty column on chessboard and bk the number of black knights in that column.

Proof: Due to the Lemma 9 and the size of b is possible to build a solution with at least one full column. By the Lemma 10 and the parity of chessboard, that solution has at least 2m or 2m−1 uncolored vertices. ■

We propose a solution with a thigh lower bound in the number of uncolored vertices like in Table 1 and Figure 7.

Now we are enabled to write a formula for the optimal number of white knights under the condition that the number of black knights is the same as in the Theorem 1.

3.1 Conclusion of proof of the Theorem 1

In this section we only show case 1. The proof is similar for other cases. We can calculate the optimal number of white knights since our solution is a thigh lower bound in the number of uncolored vertices.

By definition of balanced BWC we need min(b,wopt)=b since b=wopt. We also need the greatest value of all minimum values. We increase the value of b by k units. If ϕknight(m,n) is not optimal, the value of min(b,wopt) will be increased. Let wkopt the optimal number of whites with b+k black knights with k≥1.

The balanced BWC problem with knights and queens remained unsolved until this work. We shown a proof of a generalization of the Conjecture proposed by Berend et al. for knight case, also we shown that the second part of the conjecture is not fulfilled and we have provided a better solution in this case. The next step is a proof of not balanced case and what happens in the case of toroidal chessboards. In the case of queens the problem remains open.