For any autonomous driving vehicle, control module determines its road performance and safety, i.e. its precision and stability should stay within a carefully-designed range. Nonetheless, control algorithms require vehicle dynamics (such as longitudinal dynamics) as inputs, which, unfortunately, are obscure to calibrate in real time. As a result, to achieve reasonable performance, most, if not all, research-oriented autonomous vehicles do manual calibrations in a one-by-one fashion. Since manual calibration is not sustainable once entering into mass production stage for industrial purposes, we here introduce a machine-learning based auto-calibration system for autonomous driving vehicles. In this paper, we will show how we build a data-driven longitudinal calibration procedure using machine learning techniques. We first generated offline calibration tables from human driving data. The offline table serves as an initial guess for later uses and it only needs twenty-minutes data collection and process. We then used an online-learning algorithm to appropriately update the initial table (the offline table) based on real-time performance analysis. This longitudinal auto-calibration system has been deployed to more than one hundred Baidu Apollo self-driving vehicles (including hybrid family vehicles and electronic delivery-only vehicles) since April 2018. By August 27, 2018, it had been tested for more than two thousands hours, ten thousands kilometers (6,213 miles) and yet proven to be effective. 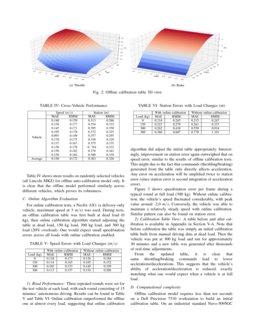 Autonomous driving technology has been a particular interest for both industrial and research communities in the last a few years. Baidu, one of the leading companies in this field, has been putting great efforts into building an open community with its open-source self-driving solution since 2017 [1, 2, 3]. With years’ development (Baidu began its autonomous driving research since 2013), we had tested hundreds of vehicles with tens of thousand hours and with multiple generations of algorithms. As the number of deployed vehicles keeps increasing, we soon found that manually calibrating (we only refer to longitudinal vehicle dynamics calibration in this paper) each vehicle is infeasible. Manual calibration involves considerable labours, which, in other words, predicts large amount of time and great potential for man-made mistakes. Further, vehicle dynamics usually vary noticeably during driving (i.e. loads changes, vehicle parts worn out over time, surface friction [4]), and manual calibration cannot possibly cover them. Taken together, it is surprising that most research papers did not attempt to address this manual-calibration puzzle. One could attribute this to the fact that most research-oriented projects only focus on very few vehicles. To solve this industrial-specific problem, in this paper we propose a novel auto-calibration (for longitudinal dynamics) system based on both offline model and online learning.

Previous researches have investigated longitudinal control algorithms extensively, and regarded it as a challenging problem [5, 6, 7]. One major challenge lies in a mission impossible — to establish an accurate longitudinal vehicle dynamics in real time [8, 9, 10]. A control model with accurate longitudinal vehicle dynamics bridges gap between desired speeds and vehicle throttling/braking commands. A popular solution is to establish this state-space relation based on Newton formula [11, 12, 13, 14]. However, transmission system, power-train system, and actuator system are all very complex. It is not only difficult to model all these systems but also it requires unacceptable computing time as more systems involved.

In this paper, we address this challenging topic from another perspective. We consider the entire longitudinal control algorithm as an end-to-end problem, which can be solved in two steps: (1) Based on human driving data, we first generate a calibration table, which takes throttle, brake, and speed as inputs, and outputs acceleration. (2) Then a sophisticated on-line algorithm updates the table to properly cover the varying vehicle dynamics. Our results show that the auto-calibration system does save considerable amount of time and improves control accuracy. The calibration is also automated and intelligent, due to which, is suitable for mass-scale self-driving vehicle deployment.

Since human driving data are naturally noisy and non-uniform (i.e. speed/acceleration does not distribute evenly during driving), Apollo control module takes a few steps to clean the data. First, a mean filter in Eq. 2 is used to smooth data. Further, Eq. 3 is applied to remove data with lateral swing. Last but not least, Eq. 4

is enforced to remove outliers.

where x is data to be processed, xmean is mean of the data, xstd

is standard deviation of the data.

Again, only data complying with Eq. 3 are used. Meanwhile, since certain differential techniques are involved (see next Section for details), we use Eq. 5 to guarantee monotonicity throughout sequences of control commands.

As to real-time data acquisition, one would expect a response delay (i.e. the time between throttling/braking commands being sent and corresponding acceleration being executed) caused by vehicular actuator. Such delay inevitably affects the quality of data, a common and useful technique is to collect data from sensors with a reasonable delay estimation

[21]. In our case, we take acceleration measured by IMU (Inertial Measurement Unit), 200 milliseconds after sending throttling/braking command, as the actual acceleration driven by that command. A Butterworth low pass filter, with an order of 3 and cutoff frequency of 2 Hz, is then used to remove high-frequency fluctuations. In case that 200 milliseconds’ delay estimation may not always be appropriate, Eq. 6 is used to further ensure data consistency.

where cmdref is the control command to be updated, i.e. command applied 200 milliseconds ago; cmdref+Δt is control command at time ref+Δt; δcmd_gap is the maximal command perturbations allowed. Note that cmdref is to be processed only if every element within its neighbourhood [cmdref−100ms, cmdref+100ms] satisfies Eq. 6. Finally, Eq. 7 is enforced on sensor data (vk, ak) to remove senseless noises.

). A standard three-layer feedforward neural network is used in offline algorithm model, with a sigmoid function as the activation function and mean square error as the cost function. The network is built using Tensorflow with a build-in Adam optimizer. In comparison, we have evaluated multiple traditional machine learning regression methods for offline model:

These methods were implemented and evaluated with WEKA [30]. Detailed settings and parameters can be found in WEKA.

where ev is current speed error, vref is expected speed, vactual is vehicle actual speed and γv is the threshold.

The gain Δi (From Line II-D to Line II-D) is determined by comparing the difference between expected acceleration and actual acceleration (Eq. 9).

where accref is expected acceleration, acck is actual acceleration collected from sensors like IMU with delay estimation. To update calibration table T, a cost function described by Eq. 10 is used for each table grid T[cmdi][vj].

where distancecmdi,vj refers to distance decay coefficient written as Eq. 11:

Apart from distance factor, similarity cost (costsimilarity) is defined as Eq. 13. Generally, similarity cost intends to preserve the original table. This is because we assume that initial table is reasonably accurate and should not be modified significantly during any short time.

where ε is similarity decay coefficient, and ι is exponential decay factor. Taken together, the update gain Δt is calculated as Eq. 14:

where σ is learning ratio.

and T′ is then ready to be used (Line II-D). As one would expect, T′ becomes T in the next control circle and a new iteration begins (Line II-D).

Offline model was tested on Lincoln MKZ with cross validation and road performance. In this section, test vehicles were put to a medium load, e.g. two passengers plus standard on-board equipments, around 200 kg in total.

Lincoln MKZ has more complex powertrain systems than Neolix AX1. Hence, if the offline calibration model works fine on Lincoln MKZ it should work well on Neolix AX1 too (and it does, see next Section).

Among all algorithms tested, Gaussian process regression, linear regression, and support vector machine were first ruled out due to their poor performance. Random Forest performed considerably better, but best results were obtained using neural network, which, in general, was able to achieve an accuracy within 3%, compared to [0,4] m/s2 effective range for throttling and [−6,0] m/s2 effective range for braking. Taken together, neural network was chosen as the offline calibration model.

Usually, algorithms working fine under laboratory conditions with given inputs do not necessary mean they would have the same level of performance in actual industrial environments. In Baidu, we take road performance very seriously. After all, our algorithms will be implemented on numberless vehicles, including but not limited to our own 100+ vehicles. We used speed error and station error to exam road performance: (1) speed error = desired speed - actual speed; (2) station error = expected location - actual location.

Table IV shows more results on randomly selected vehicles (all Lincoln MKZ) for offline auto-calibration model only. It is clear that the offline model performed similarly across different vehicles, which proves its robustness.

Three repeated rounds were set for the test vehicle at each load, with each round consisting of 15 minutes’ autonomous driving. Results can be found in Table V and Table VI. Online calibration outperformed the offline one at almost every load, suggesting that online calibration algorithm did adjust the initial table appropriately. Interestingly, improvement on station error again outweighed that on speed error, similar to the results of offline calibration tests. This might due to the fact that commands (throttling/braking) generated from the table only directly affects acceleration. Any error on acceleration will be amplified twice to station error (since station error is second integration of acceleration error).

A table before and after calibration is available in Appendix in Section V-A. Note that before calibration the table was simply an initial calibration table built from manual driving data at dead load. Then the vehicle was put at 300 kg load and run for approximately 30 minutes and a new table was generated after thousands of real-time adjustments.

From the updated table, it is clear that same throttling/braking commands lead to lower acclerations/decelerations. This suggests that the vehicle’s ability of accleration/deceleration is reduced, exactly matching what one would expect when a vehicle is at full load.

The results show that with calibration enabled, our test vehicles performed significantly better as to control accuracy (speed/station error). What is more, the algorithm has been deployed to multiple Baidu Apollo autonomous driving vehicles, including standard hybrid family vehicles and electronic delivery-only vehicles. As of August 27th 2018, it had been tested more than two thousands hours, with around ten thousands kilometers’ (6,213 miles) road tests.

Baidu Apollo autonomous driving platform is designed to target one of the most challenging problems in the field of artificial intelligence. We, the Apollo Community, will continue delivering systems that can free drivers’ hands.