Due to the several applications on Human-machine interaction (HMI), this area of research has become one of the most popular in recent years. This is the case for instance of advanced training machines, robots for rehabilitation, robotic surgeries and prosthesis. In order to ensure desirable performances, simulations are recommended before real-time experiments. These simulations have not been a problem in HMI on the side of the machine. However, the lack of controllers for human dynamic models suggests the existence of a gap for performing simulations for the human side. This paper offers to fulfill the previous gap by introducing a novel method based on a feedback controller for the dynamics of muscle-driven systems. The approach has been developed for trajectory tracking of systems with redundancy muscle resolution. To illustrate the validation of the method, a shoulder model actuated by a group of eight linkages, eight muscles and three degrees of freedom was used. The controller objective is to move the arm from a static position to another one through muscular activation. The results on this paper show the achievement of the arm movement, musculoskeletal dynamics and muscle activations. 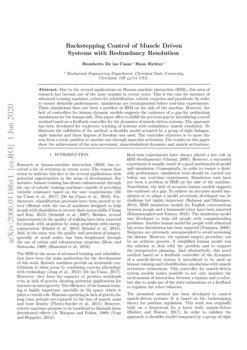 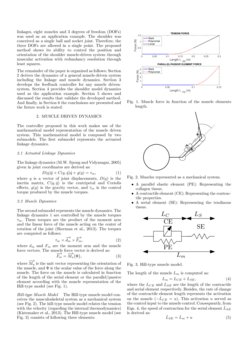 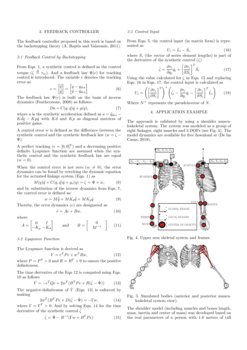 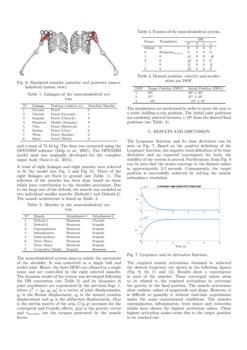 Research in human-machine interaction (HMI) has received a lot of attention in recent years. The reason that seems to indicate this fact is the several applications with potential opportunities in the areas of development. For instance, human training has shown enhancement through the use of robotic training machines capable of providing variable resistance based on the user requirements (De las Casas et al., 2017) (De las Casas et al., 2019). Furthermore, rehabilitation processes have been proved to be very efficient with the use of machines designed to help people with disabilities to recover their motor skills (Chang and Kim, 2013) (Schmidt et al., 2007). Besides, several improvements in the quality of walking have been reported for people with amputees by using prosthesis with energy regeneration (Khalaf et al., 2018) (Khalaf et al., 2015). And, in the same way, the quality and precision of surgery, specially at small scales, has been heightened through the use of robots and teleoperation surgeries (Howe and Matsuoka, 1999) (Bianchini et al., 2019).

The HMI in the areas of advanced training and rehabilitation have been the main motivation for the development of this work. Robotic machines provide an invaluable contribution to these areas by combining exercise physiology with technology (Jung et al., 2012) (De las Casas, 2017). Moreover, they have the capacity to produce workloads even in lack of gravity showing potential applications for instance in microgravity. The efficiency of the human training is highly important, specially in the space, where it plays a crucial role. Humans operating in lack of gravity for long time periods are exposed to the loss of muscle mass and bone density (Ploutz-Snyder et al., 2015). However, robotic machines promise to be beneficial to diminish these detrimental effects (A. Hargens and Friden, 1989) (Vogt and Hoppeler, 2014).

Real-time experiments have always played a key role in HMI developments (Ghaoui, 2005). However, a successful experiment is usually result of a good mathematical model and simulation. Consequently, in order to ensure a desirable performance, simulation tests should be carried out before any real-time experiments. Simulation tests have not been a problem in HMI on the side of the machine. Nonetheless, the lack of accurate human models suggests the existence of a gap. To achieve an accurate model simulation or to adapt a model previously developed can be challenge but highly important (Rahman and Mizukawa, 2013). HMI simulation models for English conversations between people and a humanoid robot have been reported (Khummongkol and Yokota, 2016). The simulation model was developed to help old people with comprehending problems. Another human model for people with abnormal hip stress distribution has been reported (Tsumura, 2008)

. Surgeries are extremely recommended to avoid worsening the disease. However, the optimal surgery procedure can be an arduous process. A simplified human model was the solution to deal with the problem and to support the preoperative planning. And alternatively, this novel method based on a feedback controller of the dynamics of a muscle-driven system is introduced to be used on human training and rehabilitation simulations with muscle activation estimations. This controller for muscle-driven system models makes possible to not only simulate the environment of interaction between a human and a robot, but also to make use of the state estimations as a feedback to regulate the robot behavior.

The presented method has been developed to control muscle-driven systems. It is based on the backstepping theory for position regulation. This work was originally built on a framework for a lower body muscle-driven (Richter and Warner, 2017). In order to validate the approach, a shoulder model composed by a group of eight linkages, eight muscles and 3 degrees of freedom (DOFs) was used as an application example. The shoulder was conceived as a single ball and socket joint. Therefore, the three DOFs are allowed in a single point. The proposed method shows its ability to control the position and orientation of the shoulder muscle-driven system through muscular activation with redundancy resolution through least squares.

The remainder of the paper is organized as follows: Section 2 derives the dynamics of a general muscle-driven system including the linkage and muscle dynamics. Section 3 develops the feedback controller for any muscle driven-system. Section 4 provides the shoulder model dynamics used as the application example. Section 5 shows and discussed the results that validate the developed method. And finally, in Section 6 the conclusions are presented and the future work is stated.

The linkage dynamics (M.W. Spong and Vidyasagar, 2005) given in joint coordinates are derived as:

is a vector of joint displacements,

D(q) is the inertia matrix, C(q,˙q) is the centripetal and Coriolis effects, g(q) is the gravity vector, and τm is the control torque produced by the muscle torques.

The second submodel represents the muscle dynamics. The linkage dynamics 1 are controlled by the muscle torques τm

. These torques are the product of the moment arm and the linear force of the muscle acting on the center of rotation of the joint

where −−→Mu is the unit vector representing the orientation of the muscle, and Φ is the scalar value of the force along the muscle. The force on the muscle is calculated in function of the length of the serial element or the parallel/passive element according with the muscle representation of the Hill-type model (see Fig. 1).

The length of the muscle Lm is computed as:

The feedback controller proposed in this work is based on the backstepping theory (A. Raptis and Valavanis, 2011).

From Eqn. 1, a synthetic control is defined as the control torque (ζΔ=τm). And a feedback law Ψ(e) for tracking control is introduced. The variable e denotes the tracking error as

The feedback law Ψ(e) is built on the basis of inverse dynamics (Featherstone, 2008) as follows:

where a is the synthetic acceleration defined as a=¨qdes−Kd~˙q−Kp~q with Kd and Kp as diagonal matrices of positive gains.

A perfect tracking (e=[0,0]T) and a decreasing positive definite Lyapunov function are assumed when the synthetic control and the synthetic feedback law are equal (w=0).

When the control error is not zero (w≠0), the error dynamics can be found by rewriting the dynamic equation for the actuated linkage system (Eqn. 1) as

and by substitution of the inverse dynamics from Eqn. 7, the control error is defined as:

Thereby, the error dynamics (e) are designated as

The Lyapunov function is derived as

The time derivative of the Eqn 12 is computed using Eqn. 10 as follows

where Γ=ΓT>0. And by solving Eqn. 14 for the time derivative of the synthetic control ˙ζ

From Eqn. 5, the control input (in matrix form) is represented as

Using the value calculated for ζ in Eqn. 15 and replacing Eqn. 16 in Eqn. 17, the control input is calculated as

Where N+ represents the pseudoinverse of N.

The approach is validated by using a shoulder musculoskeletal system. The system was modeled as a group of eight linkages, eight muscles and 3 DOFs (see Fig. 4). The model dynamics are available for free download at (De las Casas, 2019).

The shoulder model (including muscles and bones length, mass, inertia and center of mass) was developed based on the real parameters of a person with 1.8 meters of tall and a mass of 75.16 kg. The data was extracted using the OPENSIM software (Delp et al., 2007). The OPENSIM model used was originally developed for the complete upper body (Saul et al., 2015).

A total of eight linkages and eight muscles were selected to fit the model (see Fig. 5 and Fig. 6). Three of the eight linkages are fixed to ground (see Table. 1). The selection of the muscles has been done based on those which have contribution to the shoulder movement. Due to the large size of the deltoid, the muscle was modeled as two individual smaller muscles (Deltoid-1 and Deltoid-2). The muscle architecture is listed on Table. 2.

The musculoskeletal system aims to mimic the movement of the shoulder. It was conceived as a single ball and socket joint. Hence, the three DOFs are allowed in a single point and are controlled by the eight selected muscles. The dynamic model of the system was developed following the DH convention (see Table 3) and its dynamics in joint coordinates are represented by the previous Eqn. 1, where qT=[q1,q2,q3] is a vector of joint displacements, q1 is the flexion displacement, q2 is the inward rotation displacement and q3 is the adduction displacement, D(q) is the inertia matrix of the arm, C(q,˙q) accounts for the centripetal and Coriolis effects, g(q) is the gravity vector and τmuscles are the torques generated by the muscle forces.

The simulations are performed in order to move the arm to a static holding-a-cup position. The initial joint positions are randomly selected between ± 10o from the desired final positions (see Table. 4).

The Lyapunov function and its time derivative can be seen on Fig. 7. Based on the positive definition of the Lyapunov function, the negative semi-definition of its time derivative and an expected convergence for both, the stability of the system is proved. Furthermore, from Fig. 8 can be seen that the states converge to the desired values in approximately 3.5 seconds. Consequently, the target position is successfully achieved by solving the muscle redundancy resolution.

The required muscle activations obtained to achieved the desired trajectory are shown in the following figures (Fig. 9, 10, 11 and 12). Results show a convergence in each of the muscles. These converged values seem to be related to the required activations to overcome the gravity in the final position. The muscle activations show realistic values of magnitude and shape. However, it is difficult to quantify it without real-time experiments under the same experimental conditions. The muscles supraspinatus, infraspinatus, teres minor and coracobra chialis have shown the highest activation values. These highest activation makes sense due to the target position to be reached out.

Upon completion of the feedback controller simulations on the shoulder model, realistic muscle activations were witnessed. Thus, the effectiveness of the feedback controller to solve muscle driven system with redundancy resolution is shown. It is important to consider that variations in the musculoskeletal distribution of the model, as well as a different dynamic models, can vary the results.

The feedback controller was successfully tested in simulation with the shoulder model. The objective of moving the arm from a static position to another one was achieved showing realistic results. Furthermore, results show a convergence on the muscle activations. This convergence suggests that the controller is effective finding the required muscle activation values to overcome the gravity effect on the musculoskeletal weight in the final position. Future research will be performed to compare these simulation results with real-time experiments with the same objectives.

In future developments, besides of more complex trajectories, more realistic and complete models will be used for testing the current approach. Further research will also include the integration of multiple control systems for human machine interaction related to advanced exercise machines and rehabilitation.