After the tremendous development of neural networks trained by backpropagation, it is a good time to develop other algorithms for training neural networks to gain more insights into networks. In this paper, we propose a new algorithm for training feedforward neural networks which is fairly faster than backpropagation. This method is based on projection and reconstruction where, at every layer, the projected data and reconstructed labels are forced to be similar and the weights are tuned accordingly layer by layer. The proposed algorithm can be used for both input and feature spaces, named as backprojection and kernel backprojection, respectively. This algorithm gives an insight to networks with a projection-based perspective. The experiments on synthetic datasets show the effectiveness of the proposed method. 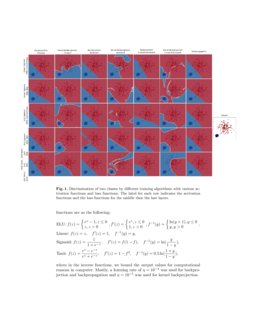 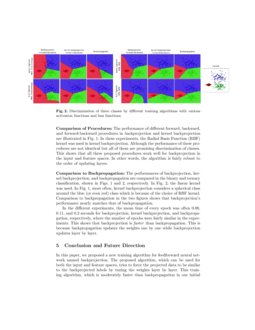 In one of his recent seminars, Geoffrey Hinton mentioned that after all of the developments of neural networks [fausett1994fundamentals]

[goodfellow2016deep], perhaps it is time to move on from backpropagation [rumelhart1986learning] to newer algorithms for training neural networks. Especially, now that we know why shallow [soltanolkotabi2018theoretical] and deep [allen2019learning] networks work very well and why local optima are fairly good in networks [feizi2017porcupine], other training algorithms can help improve the insights into neural nets. Different training methods have been proposed for neural networks, some of which are backpropagation [rumelhart1986learning]

, and belief propagation as in restricted Boltzmann machines

. Most of the spectral manifold learning methods can be reduced to kernel principal component analysis

[ham2004kernel] which is a projection-based method [ghojogh2019unsupervised]. Moreover, at its initialization, every layer of a network can be seen as a random projection [karimi2018exploring]. Hence, a promising direction could be a projection view of training neural networks. In this paper, we propose a new training algorithm for feedforward neural networks based on projection and backprojection (or so-called reconstruction). In the backprojection algorithm, we update the weights layer by layer. For updating a layer m, we project the data from the input, until the layer m. We also backproject the labels of data from the last layer to the layer m. The projected data and backprojected labels at layer m

should be equal because in a perfectly trained network, projection of data by the entire layers should result in the corresponding labels. Thus, minimizing a loss function over the projected data and backprojected labels would correctly tune the layer’s weights. This algorithm is proposed for both the input and feature spaces where in the latter, the kernel of data is fed to the network.

2.1 Projection and Backprojection in Network

[ghojogh2019unsupervised]. If U denotes the projection matrix (i.e., the weight matrix of a layer), U⊤x projects x onto the column space of U. The reverse operation of projection is called reconstruction or backprojection and is formulated as UU⊤x which shows the projected data in the input space dimensionality (note that it is Uf−1(f(U⊤x)) if we have a nonlinear function f(.) after the linear projection). At the initialization, a layer acts as a random projection [karimi2018exploring] which is a promising feature extractor according to the Johnson-Lindenstrauss lemma [achlioptas2003database]. Fine tuning the weights using labels makes the features more useful for discrimination of classes.

and their one-hot encoded labels

In a mini-batch gradient descent set-up, let {xi}bi=1 be a batch of size b. For a batch, we denote the outputs of activation functions at the m-th layer by Rdm×b∋X(m):=[x(m)1,…,x(m)b].

Now, consider the one-hot encoded labels of batch, denoted by y∈Rp. We take the inverse activation function of the labels and then reconstruct or backproject them to the previous layer to obtain y(nℓ−1). We do similarly until the layer m. Let y(m)∈Rdm denote the backprojected data at the m-th layer, calculated as:

In the backprojection algorithm, we optimize the layers’ weights one by one. Consider the m-th layer whose loss we denote by Lm:

where ℓ(.) is a loss function such as the squared ℓ2 norm (or Mean Squared Error (MSE)), cross-entropy, etc. The loss Lm tries to make the projected data x(m)i as similar as possible to the backprojected data y(m)i by tuning the weights Um. This is because the output of the network is supposed to be equal to the labels, i.e., x(nℓ)≈y. In order to tune the weights for Eq. (3

), we use a step of gradient descent. Using chain rule, the gradient is:

where diag(.) makes a matrix with its input as diagonal.

where ⊗ denotes the Kronecker product and Idm is the dm×dmidentity matrix.

So far, we explained how to update the weights of a layer. Here, we detail updating the entire network layers. In terms of the order of updating layers, we can have three different procedures for a backprojection algorithm. One possible procedure is to update the first layer first and move to next layers one by one until we reach the last layer. Repeating this procedure for the batches results in the forward procedure. In an opposite direction, we can have the backward procedure where, for each batch, we update the layers from the last layer to the first layer one by one. If we have both directions of updating, i.e., forward update for a batch and backward update for the next batch, we call it the forward-backward procedure. Algorithm LABEL:algorithm_backprojection shows how to update the layers in different procedures of the backprojection algorithm. Note that in this algorithm, an updated layer impacts the update of next/previous layer. One alternative approach is to make updating of layers dependent only on the weights tuned by previous mini-batch. In that approach, the training of layers can be parallelized within mini-batch.

According to representation theory [alperin1993local], the projection matrix U1∈Rd×d1 can be expressed as a linear combination of the projected training data. Hence, we have Rt×d1∋Φ(U1)=Φ(˘X)Θ where every column of Θ:=[θ1,…,θd1]∈Rn×d1 is the vector of coefficients for expressing a projection direction as a linear combination of projected training data. The projection of the pulled data is Rd1×n∋Φ(U1)⊤Φ(˘X)=Θ⊤Φ(˘X)⊤Φ(˘X)=Θ⊤˘K.

Datasets: For experiments, we created two synthetic datasets with 300 data points each, one for binary-class and one for three-class classification (see Figs. 1 and 2

). For more difficulty, we set different variances for the classes. The data were standardized as a preprocessing. For this conference short-paper, we limit ourselves to introduction of this new approach and small synthetic experiments. Validation on larger real-world datasets is ongoing for future publication.

Neural Network Settings: We implemented a neural network with three layers whose number of neurons are {15,20,p} where p=1 and p=3 for the binary and ternary classification, respectively. In different experiments, we used MSE loss for the middle layers and MSE or cross-entropy losses for the last layer. Moreover, we used Exponential Linear Unit (ELU) [clevert2015fast] or linear functions for activation functions of the middle layers while sigmoid or hyperbolic tangent (tanh) were used for the last layer. The derivative and inverse of these activation functions are as the following:

Comparison of Procedures: The performance of different forward, backward, and forward-backward procedures in backprojection and kernel backprojection are illustrated in Fig. 1

. In these experiments, the Radial Basis Function (RBF) kernel was used in kernel backprojection. Although the performance of these procedures are not identical but all of them are promising discrimination of classes. This shows that all three proposed procedures work well for backprojection in the input and feature spaces. In other words, the algorithm is fairly robust to the order of updating layers.

In this paper, we proposed a new training algorithm for feedforward neural network named backprojection. The proposed algorithm, which can be used for both the input and feature spaces, tries to force the projected data to be similar to the backprojected labels by tuning the weights layer by layer. This training algorithm, which is moderately faster than backpropagation in our initial experiments, can be used with either forward, backward, or forward-backward procedures. It is noteworthy that adding a penalty term for weight decay [krogh1992simple] to Eq. (3) can regularize the weights in backprojection [ghojogh2019theory]

. Moreover, batch normalization can be used in backprojection by standardizing the batch at the layers

[ioffe2015batch]. This paper concentrated on feedforward neural networks. As a future direction, we can develop backprojection for other network structures such as convolutional networks [lecun1998gradient] and carry more expensive validation experiments on real-world data.