We construct a formula ϕ which axiomatizes non-narrow rectangular grids without using any binary relations other than the grid neighborship relations. As a corollary, we prove that a set A ⊆N is a spectrum of a formula which has only planar models if numbers n ∈ A can be recognized by a non-deterministic Turing machine (or a one-dimensional cellular automaton) in time t(n) and space s(n), where t(n)s(n) ≤ n and t(n),s(n) = Ω(log(n)). 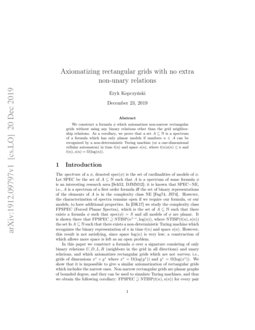 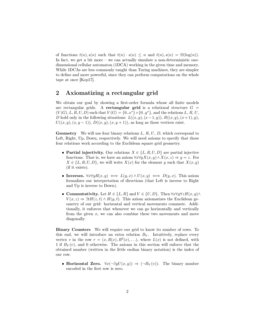 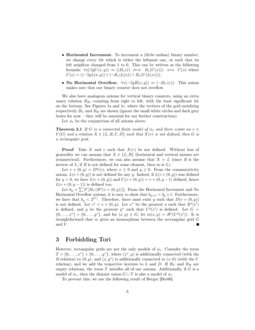 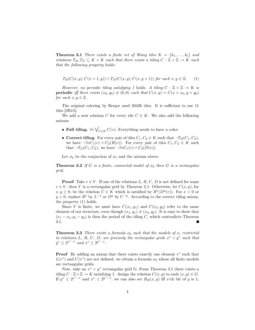 Catching a fast robber on a grid

We consider a variant of Cops and Robbers in which the robber may traver...
William B. Kinnersley, et al. ∙

CSAT is not in P

In this paper we have to demonstrate that if we claim to have an algorit...
Fabio Romano, et al. ∙

Some Remarks on Real-Time Turing Machines

Defying Gravity: The Complexity of the Hanano Puzzle

The Collatz process embeds a base conversion algorithm

The spectrum of a ϕ, denoted spec(ϕ) is the set of cardinalities of models of ϕ. Let SPEC be the set of A⊆N such that A is a spectrum of some formula ϕ is an interesting research area [Sch52, DJMM12]; it is known that SPEC=NE, i.e., A is a spectrum of a first order formula iff the set of binary representations of the elements of A is in the complexity class NE [Fag74, JS74]. However, the characterization of spectra remains open if we require our formula, or our models, to have additional properties. In [DK17] we study the complexity class FPSPEC (Forced Planar Spectra), which is the set of A⊆N such that there exists a formula ϕ such that spec(ϕ)=S and all models of ϕ are planar. It is shown there that FPSPEC⊇NTISP(n1−ϵ,log(n)), where NTISP(t(n),s(n)) the set fo A⊆N such that there exists a non-deterministic Turing machine which recognizes the binary representation of n in time t(n) and space s(n). However, this result is not satisfying, since space log(n) is very low; a construction of which allows more space is left as an open problem.

In this paper we construct a formula ϕ over a signature consisting of only binary relations U,D,L,R (neighbors in the grid in all directions) and unary relations, and which axiomatizes rectangular grids which are not narrow, i.e., grids of dimensions x∗×y∗ where x∗=Ω(log(y∗)) and y∗=Ω(log(x∗)). We show that it is impossible to give a similar axiomatization of rectangular grids which includes the narrow ones. Non-narrow rectangular grids are planar graphs of bounded degree, and they can be used to simulate Turing machines, and thus we obtain the following corollary: FPSPEC⊇NTISP(t(n),s(n)) for every pair of functions t(n),s(n) such that t(n)⋅s(n)≤n and t(n),s(n)=Ω(log(n)). In fact, we get a bit more – we can actually simulate a non-deterministic one-dimensional cellular automaton (1DCA) working in the given time and memory. While 1DCAs are less commonly taught than Turing machines, they are simpler to define and more powerful, since they can perform computations on the whole tape at once [Kop17].

We will use four binary relations L, R, U, D, which correspond to Left, Right, Up, Down, respectively. We will need axioms to specify that these four relations work according to the Euclidean square grid geometry.

We will require our grid to know its number of rows. To this end, we will introduce an extra relation BV. Intuitively, replace every vertex v in the row r=(x,R(x),R2(x),…), where L(x) is not defined, with 1 if BV(v), and 0 otherwise. The axioms in this section will enforce that the obtained number (written in the little endian binary notation) is the index of our row.

We also have analogous axioms for vertical binary counters, using an extra unary relation BH, counting from right to left, with the least significant bit on the bottom. See Figures 1a and 1c, where the vertices of the grid satisfying respectively BV and BH are shown (ignore the small white circles and dark grey boxes for now – they will be essential for our further construction).

Let ϕ1 be the conjunction of all axioms above.

If G is a connected finite model of ϕ1 and there exists an v∈V(G) and a relation X∈{L,R,U,D} such that X(v) is not defined, then G is a rectangular grid.

Proof Take X and v such that X(v) be not defined. Without loss of generality we can assume that X∈{L,R} (horizontal and vertical axioms are symmetrical). Furthermore, we can also assume that X=L (since R is the inverse of L, if R is not defined for some element, then so is L).

However, rectangular grids are not the only models of ϕ1. Consider the torus T={0,…,x∗}×{0,…,y∗}, where (x∗,y) is additionally connected (with the R relation) to (0,y), and (x,y∗) is additionally connected to (x,0) (with the U relation), and we add the respective inverses to L and D. If BV and BH are empty relations, the torus T satisifes all of our axioms. Additionally, if G is a model of ϕ1, then the disjoint union G∪T is also a model of ϕ1.

To prevent this, we use the following result of Berger [Ber66].

We add a new relation C for every tile C∈K. We also add the following axioms:

Let ϕ2 be the conjuction of ϕ1 and the axioms above.

If G is a finite, connected model of ϕ2 then G is a rectangular grid.

There exists a formula ϕ3 such that the models of ϕ, restricted to relations L, R, U, D, are precisely the rectangular grids x∗×y∗ such that y∗≤2x∗−1 and x∗≤2y∗−1.

Proof By adding an axiom that there exists exactly one element v∗ such that L(v∗) and U(v∗) are not defined, we obtain a formula ϕ3 whose all finite models are rectangular grids.

The number 2 in the theorem above can be changed to an integer b≥2 by using b-ary counters instead of the binary ones. However:

Proof We will be using Hanf’s locality lemma [Han65]. Let a r-neighborhood of the vertex v∈V, Nr(v) be the set of all vertices whose distance from v is at most r. Let a r-type of the vertex v, τ(v), be the isomorphism type of Nr(v). When we restrict to models of degree bounded by d, there are only finitely many such types. Let Tr be the set of all types. Let fr,M(G):T→{0..M} be the function that assigns to each type τ∈T the minimum of M and the number of vertices of type τ in G.

Let ϕ be a FO formula. Then there exist numbers r and M such that, for each graph G=(V,E), G⊨ϕ depends only on fr,M.

Let S⊆N be a set such that there exists a non-deterministic Turing machine (or 1DCA) recognizing the set of binary representations of elements of S in time t(n) and memory s(n), where t(n)⋅s(n)≤n and t(n),s(n)≥Ω(log(n)). Then there exists a first-order formula ϕ such that all models of ϕ are planar graphs, and the set of cardinalities of models of ϕ is S.

Let u(n)=n−t(n)s(n); without loss of generality we can assume u(n)<t(n). It is well known that a first order formula on a grid can be used to simulate a Turing machine (or 1DCA): the bottom row is the initial tape, and our formula ensures that each other row above it is a correct successor of the row below it.

Let n∈A. We will construct a formula ϕ which will have a model consisting of:

The formula ϕ will be the conjuction of the following axioms:

Our model satisfies all these axioms.