The Aduio-visual Speech Recognition (AVSR) which employs both the video and audio information to do Automatic Speech Recognition (ASR) is one of the application of multimodal leaning making ASR system more robust and accuracy. The traditional models usually treated AVSR as inference or projection but strict prior limits its ability. As the revival of deep learning, Deep Neural Networks (DNN) becomes an important toolkit in many traditional classification tasks including ASR, image classification, natural language processing. Some DNN models were used in AVSR like Multimodal Deep Autoencoders (MDAEs), Multimodal Deep Belief Network (MDBN) and Multimodal Deep Boltzmann Machine (MDBM) that actually work better than traditional methods. However, such DNN models have several shortcomings: (1) They don't balance the modal fusion and temporal fusion, or even haven't temporal fusion; (2)The architecture of these models isn't end-to-end, the training and testing getting cumbersome. We propose a DNN model, Auxiliary Multimodal LSTM (am-LSTM), to overcome such weakness. The am-LSTM could be trained and tested once, moreover easy to train and preventing overfitting automatically. The extensibility and flexibility are also take into consideration. The experiments show that am-LSTM is much better than traditional methods and other DNN models in three datasets. 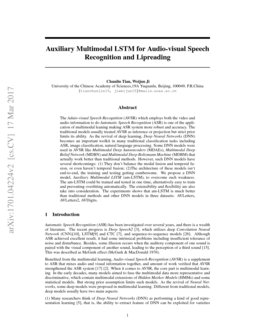 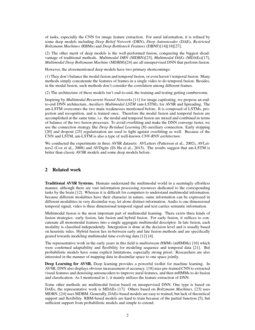 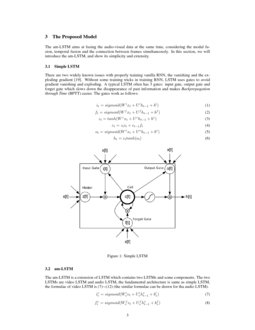 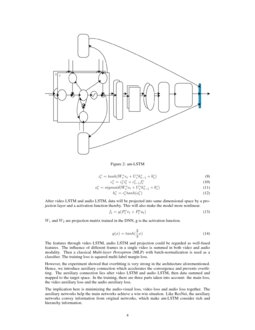 Automatic Speech Recognition (ASR) has been investigated over several years, and there is a wealth of literature. The recent progress is Deep Speech2 [3], which utilizes deep Convolution Neural Network (CNN)[10], LSTM[9] and CTC [7], and sequence-to-sequence models [26]. Although ASR achieved excellent result, it had some intrinsical problems including insufficient tolerance of noise and disturbance. Besides, some illusion occurs when the auditory component of one sound is paired with the visual component of another sound, leading to the perception of a third sound [15]. This was described as McGurk effect (McGurk & MacDonald 1976).

Benefited from the multimodal learning, Audio-visual Speech Recognition (AVSR) is a supplement to ASR that mixes audio and visual information together, and amount of work verified that AVSR strengthened the ASR system [17] [2]. When it comes to AVSR, the core part is multimodal learning. In the early decades, many models aimed to fuse the multimodal data more representative and discriminative, which contain multimodal extensions of Hidden Markov Models (HMMs) and some statistical models. But strong prior assumption limits such models. As the revival of Neural Networks, some deep models were proposed in multimodal learning. Different from traditional models, deep models usually have two main aspects:

, that is, the ability to extract feature of DNN can be exploited for varieties of tasks, especially the CNN for image feature extraction. For aural information, it is refined by some deep models including

However, the aforementioned deep models have two primary shortcomings:

(2) The architecture of these models isn’t end-to-end, the training and testing getting cumbersome.

[11] for image captioning, we propose an end-to-end DNN architecture, Auxiliary Multimodal LSTM (am-LSTM), for AVSR and lipreading. The am-LSTM overcomes the two main weaknesses mentioned before. It is composed of LSTMs, projection and recognition, and is trained once. Therefore the modal fusion and temporal fusion are accomplished at the same time, i.e. the modal and temporal fusion are mixed and combined in terms of balance of the two fusion processes. To avoid overfitting and make the DNN converge faster, we use the connection strategy like Deep Residual Learning [8]–auxiliary connection. Early stopping [20] and dropout [25] regularization are used to fight against overfitting as well. Because of the CNN and LSTM, am-LSTM is also a type of well-known CNN-RNN architecture.

Traditional AVSR Systems. Humans understand the multimodal world in a seemingly effortless manner, although there are vast information processing resources dedicated to the corresponding tasks by the brain [12]. Whereas it is difficult for computers to understand multimodal information, because different modalities have their character in nature, same information can be expressed in different modalities in very dissimilar way, let alone distinct information. Audio is one dimensional temporal signal, video is three dimensional temporal signal and text carries semantic information.

Multimodal fusion is the most important part of multimodal learning. There exists three kinds of fusion strategies: early fusion, late fusion and hybrid fusion. For early fusion, it suffices to concatenate all monomodal features into a single aggregate multimodal descriptor. In late fusion, each modality is classified independently. Intergration is done at the decision level and is usually based on heuristic rules. Hybrid fusion lies in-between early and late fusion methods and are specifically geared towards modeling multimodal time-evolving data

The representative work in the early years in this field is multistream HMMs (mHMMs) [16] which were confirmed adaptability and flexibility for modeling sequence and temporal data [21]. But probabilistic models have some explicit limitations, especially strong priori. Researchers are also interested in the manner of mapping data in dissimilar space to one space jointly.

uses pre-trained CNN to extracted visual features and denoising autoencoders to improve aural features, and then mHMMs to do fusion and classfication. As I mentioned in

1, it mainly utilizes the feature extraction of DNN.

Some other methods are multimodal fusion based on unsupervised DNN. One type is based on DAEs, the representative work is MDAEs [17]. Others based on Boltzmann Machines, [23] uses MDBN, [24] uses MDBM. Generally, DAEs-based models are easy to trained, but lack of theoretical support and flexibility. RBM-based models are hard to train because of the partial function [5], but sufficient support from probabilistic models and simple to extend.

The am-LSTM aims at fusing the audio-visual data at the same time, considering the modal fusion, temporal fusion and the connection between frames simultaneously. In this section, we will introduce the am-LSTM, and show its simplicity and extensity.

There are two widely known issues with properly training vanilla RNN, the vanishing and the exploding gradient [19]. Without some training tricks in training RNN, LSTM uses gates to avoid gradient vanishing and exploding. A typical LSTM often has 3 gates: input gate, output gate and forget gate which slows down the disappearance of past information and makes Backpropagation through Time (BPTT) easier. The gates work as follows:

The am-LSTM is a extension of LSTM which contains two LSTMs and some components. The two LSTMs are video LSTM and audio LSTM, the fundamental architecture is same as simple LSTM, the formulae of video LSTM is (7)∼(12) (the similar formulae can be drawn for tha audio LSTM).

After video LSTM and audio LSTM, data will be projected into same dimensional space by a projection layer and a activation function thereby. This will also make the model more nonlinear.

W1 and W2 are projection matrix trained in the DNN, g is the activation function.

The features through video LSTM, audio LSTM and projection could be regarded as well-fused features. The influence of different frames in a single video is summed in both video and audio modality. Then a classical

(MLP) with batch-normalization is used as a classifier. The training loss is squared multi-label margin loss.

To train our am-LSTM model, we adopt the combination of squared multi-label margin loss.

Where loss(x,y) is the squared multi-label margin loss, x and y are prediction and target.

Where Loss is the real training loss of am-LSTM, lossmain is the loss of the main part, lossvideoauxliary and lossaudioaxuliary are the loss of auxiliary part. α and β

are the hyperparameters of the influence from auxiliary part. Here, we choose

α=β=0.2. And y is the classification target. The auxiliary connection is free enough so that the am-LSTM is flexible and extensive.

In this section, we introduce our experiments details including datasets, data pre-processing, implementation details and some results, indicating that the am-LSTM is a robust, well-performing and flexible model for AVSR and likewise lipreading.

Video Pre-processing. Firstly, the Viola-Jones algorithm[28] is employed to extract the Region-of-Interest surrounding the mouth. After the region is resized to 224×224 pixels, pre-trained VGG-16 [22] is the tool to extract the image features. We use the features of last fully connected layer. Finally, reduce them to 100 principal components with PCA whitening.

The features of audio signal is extracted as spectrogram with 20ms Hamming window and 10ms overlap. With 251 points of Fast Fourier Transform and 50 principal components by PCA the spectral coefficient vector is regraded as the audio features.

Data Augmentation. 4 contiguous audio frames correspond to 1 video frame in each time step. We let the aural and visual features in every video simultaneously shift 10 frames up and down randomly to double the data. As a result, the model will have better generalisation in time domain.

The am-LSTM has two general LSTMs with dropout mapping 100 dimensional data to 50. Since the video and audio features have the same dimension, the projection is a identity matrix that could be omitted. The MLP in main phase has three layers with batch-normalization, together with ReLU activation function. The auxiliary phase has simple structure mapping 50 dimensional data to 10 classes prepared for classification. As mentioned,

The am-LSTM is able to be trained and tested once. No redundant training process is needed. Lipreading is treated as cross modality speech recognition, that is, in the training phase, video and audio modalities are both needed, whereas in the testing phase, only video modality is presented.

AVSR is the main task of our work, we conducted the experiments on AVLetters2 and AVDigits, the comparison methods are MDBN, MDAEs and RTMRBM. The results indicate that am-LSTM is much better than such models.

We proposed an end-to-end deep model for AVSR and lipreading which increases mean accuracy obviously. Our experiments suggested that am-LSTM performs much better than other models in AVSR and cross modality lipreading. The benefits of am-LSTM are trained and tested once; extensibility and flexibility. There are no other training processes needed in training am-LSTM. Due to am-LSTM is simple, it could be a tool to model fusion information efficiently. Meanwhile, am-LSTM considers temporal connection, thus it is suitable for sequence features. In the future, we plan to apply am-LSTM in other multimodal temporal tasks and make it more flexible.

[1]. I would also thank my laboratory for providing computational resources.