Withthegrowthofknowledgegraphs, entity descriptions are becoming extremely lengthy. Entity summarization task, aiming to generate diverse, comprehensive, and representative summaries for entities, has received increasing interest recently. In most previous methods, features are usually extracted by the handcrafted templates. Then the feature selection and multi-user preference simulation take place, depending too much on human expertise. In this paper, a novel integration method called AutoSUM is proposed for automatic feature extraction and multi-user preference simulation to overcome the drawbacks of previous methods. There are two modules in AutoSUM: extractor and simulator. The extractor module operates automatic feature extraction based on a BiLSTM with a combined input representation including word embeddings and graph embeddings. Meanwhile, the simulator module automates multi-user preference simulation based on a well-designed two-phase attention mechanism (i.e., entity-phase attention and user-phase attention). Experimental results demonstrate that AutoSUM produces state-of-the-art performance on two widely used datasets (i.e., DBpedia and LinkedMDB) in both F-measure and MAP. 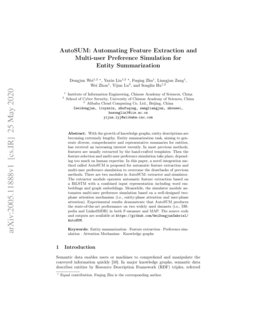 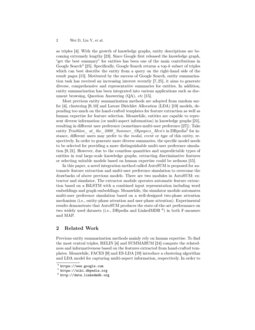 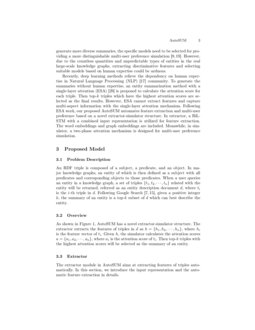 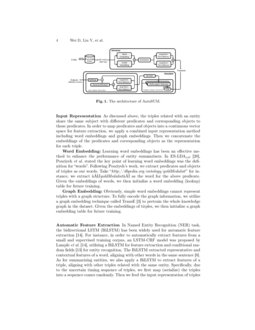 With the development of Semantic Web, entity summarization has become an...
Dongjun Wei, et al. ∙

Small objects are difficult to detect because of their low resolution an...
Fan Zhang, et al. ∙

Semantic data enables users or machines to comprehend and manipulate the conveyed information quickly [9]. In major knowledge graphs, semantic data describes entities by Resource Description Framework (RDF) triples, referred as triples [4]. With the growth of knowledge graphs, entity descriptions are becoming extremely lengthy [23]. Since Google first released the knowledge graph, “get the best summary” for entities has been one of the main contributions in Google Search111https://www.google.com [25]. Specifically, Google Search returns a top-k subset of triples which can best describe the entity from a query on the right-hand side of the result pages [15]. Motivated by the success of Google Search, entity summarization task has received an increasing interest recently [7, 25], it aims to generate diverse, comprehensive and representative summaries for entities. In addition, entity summarization has been integrated into various applications such as document browsing, Question Answering (QA), etc [15].

Most previous entity summarization methods are adopted from random surfer [4], clustering [10, 9] and Latent Dirichlet Allocation (LDA) [19] models, depending too much on the hand-crafted templates for feature extraction as well as human expertise for feature selection. Meanwhile, entities are capable to represent diverse information (or multi-aspect information) in knowledge graphs [21], resulting in different user preference (sometimes multi-user preference [27]). Take entity Triathlon_ at_the_2000_Summer_Olympics_Men’s in DBpedia222https://wiki.dbpedia.org for instance, different users may prefer to the medal, event or type of this entity, respectively. In order to generate more diverse summaries, the specific model needs to be selected for providing a more distinguishable multi-user preference simulation [10, 21]. However, due to the countless quantities and unpredictable types of entities in real large-scale knowledge graphs, extracting discriminative features or selecting suitable models based on human expertise could be arduous [15].

In this paper, a novel integration method called AutoSUM is proposed for automatic feature extraction and multi-user preference simulation to overcome the drawbacks of above previous models. There are two modules in AutoSUM: extractor and simulator. The extractor module operates automatic feature extraction based on a BiLSTM with a combined input representation including word embeddings and graph embeddings. Meanwhile, the simulator module automates multi-user preference simulation based on a well-designed two-phase attention mechanism (i.e., entity-phase attention and user-phase attention). Experimental results demonstrate that AutoSUM produces the state-of-the-art performance on two widely used datasets (i.e., DBpedia and LinkedMDB 333http://data.linkedmdb.org) in both F-measure and MAP.

Previous entity summarization methods mainly rely on human expertise. To find the most central triples, RELIN [4] and SUMMARUM [24] compute the relatedness and informativeness based on the features extracted from hand-crafted templates. Meanwhile, FACES [10] and ES-LDA [19] introduce a clustering algorithm and LDA model for capturing multi-aspect information, respectively. In order to generate more diverse summaries, the specific models need to be selected for providing a more distinguishable multi-user preference simulation [10, 19]. However, due to the countless quantities and unpredictable types of entities in the real large-scale knowledge graphs, extracting discriminative features and selecting suitable models based on human expertise could be arduous.

[17] community. To generate the summaries without human expertise, an entity summarization method with a single-layer attention (ESA) [29] is proposed to calculate the attention score for each triple. Then top-k triples which have the highest attention scores are selected as the final results. However, ESA cannot extract features and capture multi-aspect information with the single-layer attention mechanism. Following ESA work, our proposed AutoSUM automates feature extraction and multi-user preference based on a novel extractor-simulator structure. In extractor, a BiLSTM with a combined input representation is utilized for feature extraction. The word embeddings and graph embeddings are included. Meanwhile, in simulator, a two-phase attention mechanism is designed for multi-user preference simulation.

An RDF triple is composed of a subject, a predicate, and an object. In major knowledge graphs, an entity of which is then defined as a subject with all predicates and corresponding objects to those predicates. When a user queries an entity in a knowledge graph, a set of triples {t1,t2,⋯,tn} related with the entity will be returned, referred as an entity description document d, where ti is the i-th triple in d. Following Google Search [15, 7], given a positive integer k, the summary of an entity is a top-k subset of d which can best describe the entity.

As shown in Figure 1, AutoSUM has a novel extractor-simulator structure. The extractor extracts the features of triples in d as h={h1,h2,⋯,hn}, where hi

is the feature vector of

The extractor module in AutoSUM aims at extracting features of triples automatically. In this section, we introduce the input representation and the automatic feature extraction in details.

Word Embedding: Learning word embeddings has been an effective method to enhance the performance of entity sumamrizers. In ES-LDAext [20], Pouriyeh et al. stated the key point of learning word embeddings was the definition for “words”. Following Pouriyeh’s work, we extract predicates and objects of triples as our words. Take “http://dbpedia.org/ontology/goldMedalist” for instance, we extract “goldMedalist” as the word for the above predicate. Given the embeddings of words, we then initialize a word embedding (lookup) table for future training.

[14]. For instance, in order to automatically extract features from a small and supervised training corpus, an LSTM-CRF model was proposed by Lample et al. [14], utilizing a BiLSTM for feature extraction and conditional random fields [13] for entity recognition. The BiLSTM extracted representative and contextual features of a word, aligning with other words in the same sentence [8]. As for summarizing entities, we also apply a BiLSTM to extract features of a triple, aligning with other triples related with the same entity. Specifically, due to the uncertain timing sequence of triples, we first map (serialize) the triples into a sequence comes randomly. Then we feed the input representation of triples in the sequence to the BiLSTM, and take the outputs as the extracted features for those triples.

The intuition of entity-phase attention is straightforward. Since the single-layer attention mechanism in ESA [29]

In this section, we demonstrate the complete pipeline of AutoSUM. As described in Section 3.1, the input of AutoSUM is an entity description document d={t1,t2,⋯,tn}. Here, ti is the i-th triple in d, which is composed of a same subject s, a predicate pi and an object oi. Given d, we first split d into a predicate set p={p1,p2,⋯,pn} and an object set o={o1,o2,⋯,on}, respectively. Given p and o, we combine word embeddings and graph embeddings to map pi and oi into a continuous vector space and concatenate them as ei, recursively. Given e={e1,e2,⋯,en}, we randomly map e into a sequence q=(q1,q2,⋯,qn). Then we apply a BiLSTM to extract the features vector hi of qi as follows,

where uij is the preference value allocated to triple ti by uj. Given u= { u1,u2,⋯,um }, we randomly map u into a sequence q∗=(q∗1,q∗2,⋯,q∗m) and utilize a BiLSTM to encode uj into u∗j as follows,

where →c∗ and ←c∗ are the final hidden states from forward and backward LSTM networks. Then we calculate the attention score for user preference as follows,

Finally, we employ cross-entropy loss and define the loss function

Here, ¯¯¯a={¯¯¯a1,¯¯¯a2,⋯,¯¯¯an} is a gold(real) attention score vector associated with above entity from ESBM dataset. Specifically, we count the frequency of the i-th triple ti selected by users in ESBM dataset following ESA work, denoted as ci. Then the gold attention score ¯¯¯¯αi of ti is formulated as follows,

In this paper, we utilize ESBM dataset v1.1, which consists of 6.8k triples related with 125 entities from DBpedia [2] and 2.6k triples related with 50 entities from LinkedMDB [5]. Given an entity, ESBM asks 5 different users to select top-5 and top-10 triples which can best describe the entity. In addition, ESBM provides an evaluator for the comparison of different entity summarization methods. Both datasets and evaluator can be accessed from the ESBM website444http://ws.nju.edu.cn/summarization/esbm/.

is an open source implementation of ES-LDA. To provide ablation studies, we also modify the original AutoSUM into

5 different versions, denoted as AutoSUM1∼5, which will be futher illustrated in Section 4.3.

. F-measure is the harmonic mean of recall and precision, and MAP is the mean average of precision. Meanwhile, given the limited number of entities in ESBM, we conduct

5-fold cross-validation to reduce the risk of overfitting without losing the number of learning instances [11]. Specifically, the entities in ESBM are divided into 5 folds randomly. The parameters for each model are tuned on 4-of-5 folds. The final fold in each case is utilized to evaluate the optimal parameters. Since ESA has significantly better than all other state-of-the-art methods in our baselines, we then compare the statistical significance among ESA and AutoSUMs (i.e., the original AutoSUM and the modified AutoSUM1∼5

For experimental details, we tune the parameters on a validation set (i.e., a part of the training set). Specifically, to learn graph embeddings, we utilize TransE to pretrain the whole ESBM dataset. Here, the dimension of each triple is set to 100. As for word embeddings, we initialize the lookup table randomly, where the dimension of each word is set to 100. Then we apply a BiLSTM with a single layer in each LSTM cell for feature extraction, where the number of the layers in multi-aspect mechanism is set to 6. In addition, the graph embedding of each triple is fixed after pretraining, while all other parameters in AutoSUM are initialized randomly and tuned without weight sharing. We train the AutoSUM model for 200epochs, and report the results of the best epoch under early stopping.

As shown in Table 1 and 2, AutoSUM is significantly better than some existing state-of-art methods in our baselines.

Comparison with Traditional Methods: Compared with traditional methods depending on manual feature extraction and multi-user preference simulation, AutoSUM automates the above processes without any human expertise effectively. The average improvement of AutoSUM over the best outperforming traditional methods is 38% and 36%, in terms of F-measure and MAP, respectively.

Comparison with Deep Learning Methods: Compared with ESA, which calculates attention scores without feature extraction and multi-user preference, AutoSUM achieves the state-of-the-art performance. The average improvement of AutoSUM over ESA is 26% and 23%, in terms of F-measure and MAP, respectively.

In this section, we provide ablation studies to demonstrate the effectiveness of the primary modules in AutoSUM.

AutoSUM1: To evaluate the features extracted by AutoSUM, AutoSUM1 removes the BiLSTM in extractor and feeds the input representation of triples into simulator directly. Experimental results show the original AutoSUM is significantly better than AutoSUM1, proving that the BiLSTM extracts high-quality features for user-preference simulation.

In this paper, we propose a novel integration model called AutoSUM to automate feature extraction and multi-user preference simulation for entity summarization. The performance of our proposed AutoSUM is significantly better than other state-of-the-art methods in both F-measure and MAP. Meanwhile, sufficient ablation studies are provided to demonstrate the effectiveness of each module in AutoSUM. In the future, we expect to expand the ESBM dataset and introduce the notion of AutoSUM into other applications such as recommender systems [6, 18].

This research is supported in part by the Beijing Municipal Science and Technology Project under Grant Z191100007119008.