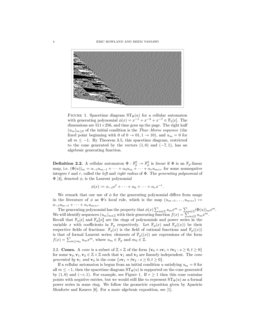 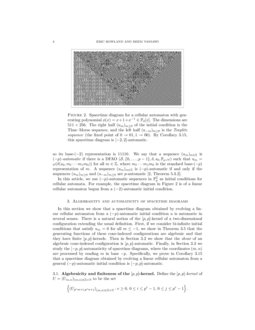 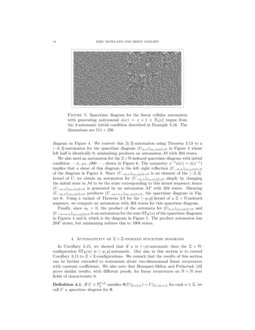 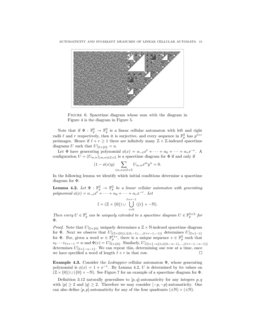 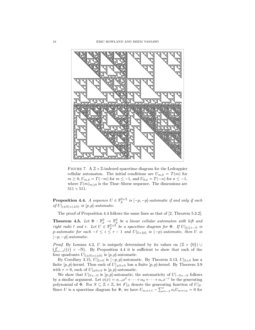 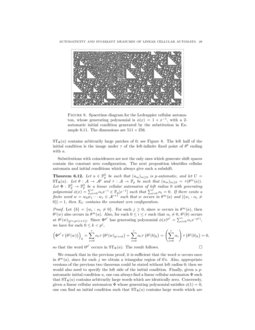 It is well-known that the spacetime diagrams of some cellular automata h...
Vincent Nesme, et al. ∙

Self-stabilisation of cellular automata on tilings

Given a finite set of local constraints, we seek a cellular automaton (i...
Nazim Fatès, et al. ∙

In this paper, we prove that there is a strongly universal cellular auto...
Maurice Margenstern, et al. ∙

In this article, we study the relationship between p-automatic sequences and spacetime diagrams of linear cellular automata over the finite field Fp, where p is prime. For definitions, see Section 2.

There are many characterisations of p-automatic sequences. For readers familiar with substitutions, Cobham’s theorem tells us that they are codings of fixed points of length-p substitutions. In an algebraic setting, Christol’s theorem tells us that they are precisely those sequences whose generating functions are algebraic over Fp(x). In [29], we characterise p-automatic sequences as those sequences that occur as columns of two-dimensional spacetime diagrams of linear cellular automata Φ:FZp→FZp, starting with an eventually periodic initial condition.

In Sections 3 and 4 we extend these previous results by relaxing the constraints imposed on the initial conditions and the cellular automata. We allow initial conditions to be bi-infinite (−p)-automatic sequences or, equivalently, concatenations of two p-automatic sequences. Iterating Φ produces a Z×N-configuration, and we show in Theorem 3.10, Theorem 3.14, and Corollary 3.15, that such spacetime diagrams are automatic, with two possible definitions of automaticity: either by shearing a configuration supported on a cone or by considering [−p,p]-automaticity. Our results are constructive, in that given an automaton that generates an automatic initial condition, we can compute an automaton that generates the spacetime diagram. We perform such a computation in Example 3.11, which we use as a running example throughout the article. While the spacetime diagram has a substitutional nature, the alphabet size makes the computation of this substitution by hand infeasible, and indeed difficult even using software.

We can also extend a spacetime diagram backward in time to obtain a Z×Z-configuration where each row is the image of the previous row under the action of the cellular automaton. In Lemma 4.2 we show that the initial conditions that generate a Z×Z-configuration are supported on a finite collection of lines. In Theorem 4.5, we show that if the initial conditions are chosen to be p-automatic, then the resulting spacetime diagram is a concatenation of four [p,p]-automatic configurations.

Apart from the intrinsic interest of studying automaticity of spacetime diagrams, one motivation for our study is a search for closed nontrivial sets in FZp which are invariant under the action of the both left shift map σ and a fixed linear cellular automaton Φ. Analogously, we also search for measures μ on one-dimensional subshifts (X,σ) that are invariant under the action of both σ and Φ.

We give a brief background. Furstenberg [18] showed that any closed subset of the unit interval I which is invariant under both maps x↦2xmod1 and x↦3xmod1 must be either I or finite. This is an example of topological rigidity. Furstenberg asked if there also exists a measure rigidity, i.e. if there exists a nontrivial measure μ on I which is invariant under these same two maps. By “nontrivial” we mean that μ is neither the Lebesgue measure nor finitely supported. This question is known as the (×2,×3) problem.

The (×2,×3) problem has a symbolic interpretation, which is to find a measure on FN2 which is invariant under both σ, which corresponds to multiplication by 2, and the map u↦u+σ(u), which corresponds to multiplication by 3 and where + represents addition with carry. One can ask a similar question for σ and the Ledrappier cellular automaton u↦u+σ(u), where + represents coordinate-wise addition modulo 2. One way to produce such measures is to average iterates, under the cellular automaton, of a shift-invariant measure, and to take a limit measure. Pivato and the second author [25] show that starting with a Markov measure, this procedure only yields the Haar measure λ. Host, Maass, and Martinez [19] show that if a (σ,Φ)-invariant measure that has positive entropy for Φ and is ergodic for the shift or the Z2-action then μ=λ. The problem of identifying which measures are (σ,Φ)-invariant is an open problem; see for example Boyle’s survey article [11, Section 14] on open problems in symbolic dynamics or Pivato’s article [24, Section 3] on the ergodic theory of cellular automata.

The quest for nontrivial (σ,Φ)-invariant measures appears to be more delicate. Let (XU,σ1,σ2) be a subshift generated by a [−p,−p]-automatic configuration U. Theorem 6.8 states that the measures supported on such subshifts are convex combinations of measures supported on codings of substitution shifts. We show in Theorem 5.2 that U has at most polynomial complexity. Therefore the (σ,Φ)-invariant measures guaranteed by Proposition 6.1 are not the Haar measure. However they may be finitely supported: the shift XU generated by a nonperiodic spacetime diagram U can contain periodic points on which a shift-invariant measure is supported. In Theorems 6.10 and 6.12 we identify cellular automata and nonperiodic initial conditions that yield two-dimensional shifts containing constant configurations.

We show in Corollary 6.3 that spacetime diagrams that do not contain large one-dimensional repetitions support nontrivial (σ,Φ)-invariant measures, and in Theorem 6.2 we show that this condition is decidable. In Theorem 6.4 we show that for the Ledrappier cellular automaton there exists a family of substitutions all of whose spacetime diagrams, including our running example, support nontrivial measures. A natural question that remains is whether such a family can be found for every nontrivial linear cellular automaton.

Let A be a finite alphabet. An element in AZ is called a configuration and is written u=(um)m∈Z. The (left) shift map σ:AZ→AZ is the map defined as (σ(u))m:=um+1. Let A be endowed with the discrete topology and AZ with the product topology; then AZ is a metrisable Cantor space. A (one-dimensional) cellular automaton is a continuous, σ-commuting map Φ:AZ→AZ. The Curtis–Hedlund–Lyndon theorem tells us that a cellular automaton is determined by a local rule f: there exist integers ℓ and r with −ℓ≤r and f:Ar+ℓ+1→A such that, for all m∈Z, (Φ(u))m=f(um−ℓ,…,um+r). Let N denote the set of non-negative integers.

For the cellular automata in this article, A=Fp. The configuration space FZp forms a group under componentwise addition; it is also an Fp

A cellular automaton Φ:FZp→FZp is linear if Φ is an Fp-linear map, i.e. (Φ(u))m=α−ℓum−ℓ+⋯+α0um+⋯+αrum+r for some nonnegative integers ℓ and r, called the left and right radius of Φ. The generating polynomial of Φ [4], denoted ϕ, is the Laurent polynomial

We remark that our use of ϕ for the generating polynomial differs from usage in the literature of ϕ as Φ’s local rule, which is the map (um−ℓ,…,um+r)↦α−ℓum−ℓ+⋯+αrum+r.

The generating polynomial has the property that ϕ(x)∑m∈Zumxm=∑m∈Z(Φ(u))mxm. We will identify sequences (um)m∈Z with their generating function f(x)=∑m∈Zumxm. Recall that Fp[x] and Fp⟦x⟧ are the rings of polynomials and power series in the variable x with coefficients in Fp respectively. Let Fp(x) and Fp((x)) be their respective fields of fractions: Fp(x) is the field of rational functions and Fp((x)) is that of formal Laurent series; elements of Fp((x)) are expressions of the form f(x)=∑m≥m0umxm, where um∈Fp and m0∈Z.

If a cellular automaton is begun from an initial condition u satisfying um=0 for all m≤−1, then the spacetime diagram STΦ(u) is supported on the cone generated by (1,0) and (−r,1). For example, see Figure 1. If r≥1 then this cone contains points with negative entries, but we would still like to represent STΦ(u) as a formal power series in some ring. We follow the geometric exposition given by Aparicio Monforte and Kauers [6]. For a more algebraic exposition, see [1].

For each cone C, let Fp,C⟦x,y⟧ be the set of all formal power series in x and y, with coefficients in Fp, whose support is in C. Then (ordinary) multiplication of two elements in Fp,C⟦x,y⟧ is well defined, and the product belongs to Fp,C⟦x,y⟧; in fact Fp,C⟦x,y⟧ is an integral domain [6, Theorems 10 and 11].

Then Fp,⪯⟦x,y⟧ is a ring contained in the field ⋃(m,n)∈Z×ZxmynFp,⪯⟦x,y⟧  [6, Theorem 15]. This field also contains the field Fp(x,y) of rational functions.

Next we define automatic sequences, which we will use as initial conditions for spacetime diagrams.

In this article, our output alphabet is A=Fp.

The function δ extends in a natural way to the domain S×Σ∗, where Σ∗ is the set of all finite words on the alphabet Σ. Namely, define δ(s,mℓ⋯m1m0):=δ(δ(s,m0),mℓ⋯m1) recursively. If Σ={0,…,p−1}, this allows us to feed the standard base-p representation mℓ⋯m1m0 of an integer m into an automaton, beginning with the least significant digit. (Recall that the standard base-p representation of 0 is the empty word.) All automata in this article process integers by reading their least significant digit first.

3. Algebraicity and automaticity of spacetime diagrams

3.1. Algebraicity and finiteness of the [p,p]-kernel

A power series f(x)∈Fp⟦x⟧ is algebraic over Fp(x) if there exists a nonzero polynomial P(x,z)∈Fp[x,z] such that P(x,f(x))=0. Similarly, the cone-indexed series f(x,y)∈Fp,⪯⟦x,y⟧ is algebraic over Fp(x,y) if there exists a nonzero polynomial P(x,y,z)∈Fp[x,y,z] such that P(x,y,f(x))=0. We recall Christol’s theorem for one-dimensional power series [13, 14], generalised to two-dimensional power series by Salon [30].

We refer to [2, Theorems 12.2.5 and 14.4.1] for the proof of Theorem 3.1, where it is shown that the algebraicity of a power series over a finite field is equivalent to the automaticity of its sequence of coefficients, which is equivalent to the finiteness of its p- or [p,p]-kernel.

In the next lemma we show that the image of Fp,⪯⟦x,y⟧ under Λi,j is indeed contained in Fp,⪯⟦x,y⟧. We show more: although elements of the [p,p]-kernel of F(x,y)∈Fp,C⟦x,y⟧ do not necessarily belong to Fp,C⟦x,y⟧, their indexing sets are one of a finite set of translates of C.

Next we prove that a linear cellular automaton begun from a p-automatic initial condition produces an algebraic spacetime diagram. A special case appears in Allouche et al. [4, Lemma 2], when the initial condition is eventually 0 in both directions. The proof in the general case is similar.

Let Φ:FZp→FZp be a linear cellular automaton. If u∈FZp is such that (um)m≥0 is p-automatic and um=0 for all m≤−1, then the generating function of STΦ(u) is algebraic and so has a finite [p,p]-kernel.

In Figure 1 we have an illustration of a spacetime diagram satisfying the conditions of Theorem 3.5.

Let C be the cone generated by (1,0) and (−r,1). An interesting question is the following. Given a polynomial equation Q(x,y,z)=0 satisfied by z=F(x,y)∈Fp,C⟦x,y⟧, is it decidable whether F(x,y) is the generating function of STΦ(u) for some linear cellular automaton Φ? The initial condition u is determined by F(x,0), so it would suffice to obtain an upper bound on the left radius ℓ.

If r≥1, then the cone generated by (1,0) and (−r,1) contains points (m,n) where m≤−1. In this section, we feed these indices into an automaton by shearing the sequence so that it is supported on N×N.

Let ℓ′=−⌊i−ℓp⌋. Let m,n∈Z. We prove the result for the monomial F(x,y)=xmyn; the general result then follows from the linearity of Λi,j. If n≢jmodp, then both sides are 0. If n≡jmodp, we have

Note here that for each fixed ℓ, the map i↦(i−ℓ)modp is a bijection.

Therefore the shear of x⌊i+s+rjp⌋Λi,j(F(x,y)) is

We can now extend Theorem 3.5.