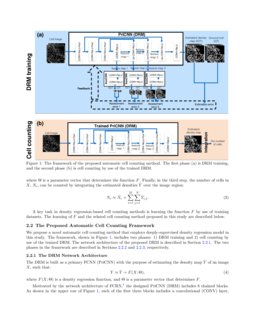 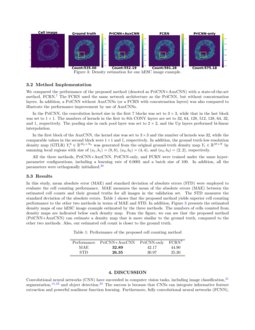 Accurately counting the number of cells in microscopic images greatly aids medical diagnoses and biological studies [1]. However, manual cell counting, which is slow, expensive, and prone to subjective errors, is not practically feasible for high-throughput processes. An automatic and efficient solution with improved counting accuracy is highly desirable, but automatic cell counting is challenging due to the low image contrast, strong tissue background, and significant inter-cell occlusions in 2D microscopic images [2, 3, 4, 5].

To address these challenges [6, 7], density-based counting methods have received increasing attention, due to their superior performance to those traditional detection-based methods [8, 9, 5, 10]

. Generally speaking, density-based methods employ machine-learning tools to learn a density regression model (DRM) that estimates the cell density distribution from the characteristics/features of a given image. The number of cells can be subsequently estimated by integrating the estimated density map. For example, Lempitsky et al.

Generally, the layers in the FCRN are hierarchically constructed, and the output of each layer relies on the outputs of its previous layers. There are two potential shortcomings of this traditional network design. First, the intermediate layers are optimized based on the gradient information back-propagated only from the final layer of the network, not directly from the adjacent layer. Second, this design allows only adjacent layers to be connected, while limiting the integration of multi-scale features (or information) and overall network performance. These two shortcomings might lead to sub-optimized intermediate layers, and can eventually affect the overall cell counting accuracy. Thus, the need to improve the accuracy of automated cell counting methods remains.

Recently, in order to improve the effectiveness of learning intermediate layers in a designed deep neural networks, deeply-supervised learning (or deep supervision) has been proposed and has shown promising performance for addressing various computer vision tasks, such as classification

[11] and segmentation [12, 13]. In addition, concatenating CNN frameworks have also attracted great attention. These networks can concatenate multi-scale features by shortcut connections of non-adjacent layers within the network, and so achieve better results than the traditional networks in such computer vision tasks as segmentation [14] and detection [15].

Motivated by these works, this study proposes a novel density regression-based automatic cell counting method. A FCNN is used as a primary FCNN (PriCNN) to learn the density regression model (DRM) that performs an end-to-end mapping from a cell image to the corresponding density map. A set of auxiliary CNN (AuxCNNs) are built to assess the features at the intermediate layers in the PriCNN and to directly supervise the training of these layers. In addition, by use of concatenation layers, the multi-scale features from non-adjacent layers are integrated to improve the granularity of the features extracted from the intermediate layers for further supporting final density map estimation. Experimental results, evaluated on a set of immunofluorescent images of human embryonic stem cells (hESC), have demonstrated the superior performance of the proposed deep supervision-based DRM method compared to other state-of-the-art methods.

The goal of density regression-based cell counting methods is to learn a density regression function F, which can be employed to estimate the density map of a given image [6, 7]. Given an image X∈RM×N which includes Nc cells, the density map Y∈RM×N of X can be considered as the superposition of a set of Nc normalized 2D discrete Gaussian kernels that are placed at the centroids of the Nc cells. Therefore, the number of cells can be counted by integrating the density map over the image.

ϕ(Xi,j)∈RZ. The feature map P∈RM×N×Z of X can be generated using specific feature extraction methods, such as the dense scale invariant feature transform (SIFT) descriptor [16], ordinary filter banks [17], or codebook learning [18]. In the second step, the estimated density ^Yi,j of each pixel Xi,j in X can be obtained by applying a pre-trained density regression function F on the given ϕ(Xi,j):

where Θ is a parameter vector that determines the function F. Finally, in the third step, the number of cells in X, Nc, can be counted by integrating the estimated densities ^Y over the image region:

We propose a novel automatic cell counting method that employs deeply-supervised density regression model in this study. The framework, shown in Figure 1, includes two phases: 1) DRM training and 2) cell counting by use of the trained DRM. The network architecture of the proposed DRM is described in Section 2.2.1. The two phases in the framework are described in Sections 2.2.2 and 2.2.3, respectively.

The DRM is built as a primary FCNN (PriCNN) with the purpose of estimating the density map ^Y of an image X, such that:

where F(X;Θ) is a density regression function, and Θ is a parameter vector that determines F.

Motivated by the network architecture of FCRN [7], the designed PriCNN (DRM) includes 8 chained blocks. As shown in the upper row of Figure 1

In addition, concatenation layers are employed in the PriCNN to integrate multi-scale features and thus improve the granularity of the features, which assists in the final density map estimation. This design is motivated by a network architecture described by Ronneberger et. al [14]. As shown in Figure 1, the outputs from each of the first three blocks are multi-resolution, low-dimension, and highly-representative feature maps. Three shortcut connections are established to connect the first and seventh blocks, the second and sixth blocks, and the third and fifth blocks, respectively. With these shortcut connections, multi-resolution features can be concatenated between non-adjacent layers. The integration of multi-scale features can further improve the performance of the network compared to the traditional FCRN, which allows only adjacent layers to be connected.

Training the designed DRM (or PriCNN) with such a hierarchical structure is a challenging task. As described in Section 1, all the layers in the original FCRN [7] are learned based on the feedback only from the final layer. Therefore, the intermediate layers might be sub-optimized, which can significantly affect the accuracy of the final estimated density map.

The parameters of the PriCNN can be learned by jointly training the PriCNN and the AuxCNNs with a set of given training data D={(Xi,Yi)}i=1,2,..,B, where Xi and Yi represent the i-th image and its associated ground-truth density map, respectively. The training is completed by minimizing the differences between the estimated density maps at different resolution levels and the ground truth density maps.

-th AuxCNN. Therefore, the cooperative training of the PriCNN and AuxCNNs is performed by jointly minimizing four loss functions, defined below:

To improve the computational efficiency of the optimization of the PriCNN and AuxCNNs, we construct a combined loss function, defined as below:

where λk∈[0,1] is a parameter that controls the relative strength of the supervision under the k-th AuxCNN for learning the intermediate layers in the PriCNN. Eqn.(6

During the cell counting phase of the framework (Figure 1), the number of cells in a to-be-tested image Xt∈RM′×N′ can be estimated by use of the trained DRM represented by F(X;Θ∗):

where [F(Xt;Θ∗)]i,j is the estimated density at pixel (i,j). In this step, the dimensions of the to-be-tested image can be different because arbitrary input image sizes are allowed by the trained PriCNN.

A set of 49 immunofluorescent images of human embryonic stem cells (hESC) was employed in this study to test the performance of the proposed method. Each image was 512×512 pixels, and the 49 hESC images were manually annotated by identifying the centroid of each cell within each image. Statistically, the cell number among these images is about 518±316.

For each annotated image in the training dataset, the corresponding ground truth density maps were generated by placing a normalized 2D discrete Gaussian kernel with isotropic covariance, σ2, at each annotated cell centroid in the image (details shown in Section 2.2). The values of σ and 2KG+1 were set to 3 pixels and 21 pixels, respectively. A pair consisting of an image and a density map was considered as a training sample for training the PriCNN and AuxCNNs. In this study, 5-fold cross validation was employed to evaluate the cell counting performance.

, and the Up layers performed bi-linear interpolation.

In the first block of the AuxCNN, the kernel size was set to 3×3 and the number of kernels was 32, while the comparable values in the second block were 1×1 and 1, respectively. In addition, the ground truth low-resolution density map (GTLR) Yki∈RMk×Nk was generated from the original ground-truth density map Yi∈RM×N by summing local regions with size of (a1,b1)=(8,8), (a2,b2)=(4,4), and (a3,b3)=(2,2), respectively.

All the three methods, PriCNN+AuxCNN, PriCNN-only, and FCRN were trained under the same hyper-parameter configurations, including a learning rate of 0.0001 and a batch size of 100. In addition, all the parameters were orthogonally initialized [20].

1 shows that the proposed method yields superior cell counting performance to the other two methods in terms of MAE and STD. In addition, Figure 3 presents the estimated density maps of one hESC image example estimated by the three methods. The numbers of cells counted from density maps are indicated below each density map. From the figure, we can see that the proposed method (PriCNN+AuxCNN) can estimate a density map that is more similar to the ground truth, compared to the other two methods. Also, our estimated cell count is closer to the ground truth.

, allow flexible input image sizes, and have been employed to perform an efficient end-to-end mapping from an image (one domain) to a probability map (another domain). Both the PriCNN (the proposed DRM in the study) and FCRN

[7] are some specific FCNNs, which explain the descent cell counting accuracy they have achieved in this study.

In this study, for the first time, a deeply-supervised density regression framework is proposed for automatic cell counting. The results obtained on experimental hESC images demonstrate the superior cell counting performance of the proposed method, compared with the state of the art.