In this article, we describe some discursive segmentation methods as well as a preliminary evaluation of the segmentation quality. Although our experiment were carried for documents in French, we have developed three discursive segmentation models solely based on resources simultaneously available in several languages: marker lists and a statistic POS labeling. We have also carried out automatic evaluations of these systems against the Annodis corpus, which is a manually annotated reference. The results obtained are very encouraging. 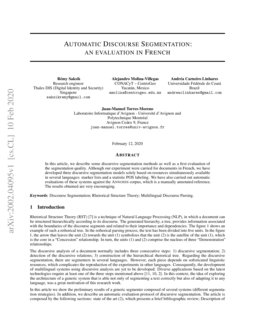 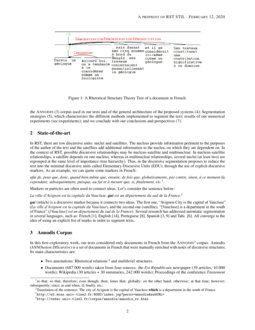 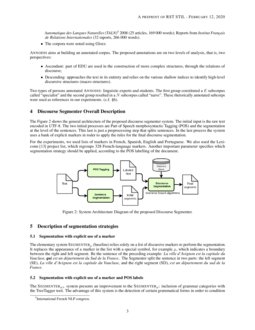 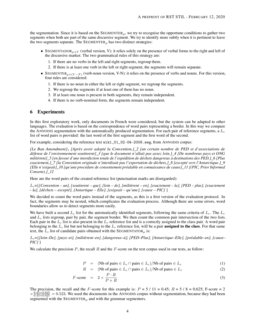 is a technique of Natural Language Processing (NLP), in which a document can be structured hierarchically according to its discourse. The generated hierarchy, a tree, provides information associated with the boundaries of the discourse segments and related to their importance and dependencies. The figure

The discursive analysis of a document normally includes three consecutive steps: 1) discursive segmentation; 2) detection of the discursive relations; 3) construction of the hierarchical rhetorical tree. Regarding the discursive segmentation, there are segmenters in several languages. However, each piece depends on sofisticated linguistic resources, which complicates the reproduction of the experiments in other languages. Consequently, the development of multilingual systems using discursive analysis are yet to be developed. Diverse applications based on the latest technologies require at least one of the three steps mentioned above [molina2013discursive, molinalinguamatica10, compression]. In this context, the idea of exploring the architecture of a generic system that is able not only of segmenting a text correctly but also of adapting it to any language, was a great motivation of this research work.

In this article we show the preliminary results of a generic segmenter composed of several systems (different segmentation strategies). In addition, we describe an automatic evaluation protocol of discursive segmentation. The article is composed by the following sections: state of the art (2), which presents a brief bibliographic review; Description of the Annodis (3) corpus used in our tests and of the general architecture of the proposed systems (4); Segmentation strategies (5), which characterizes the different methods implemented to segment the text; results of our numerical experiments (sec:experiments); and we conclude with our conclusions and perspectives (7).

In RST, there are tow discursive units: nuclei and satellites. The nucleus provide information pertinent to the purposes of the author of the text and the satellites add additional information to the nucleu, on which they are dependent on. In the context of RST, possible discursive relationships may be nucleus-satellite and multinuclear. In nucleus-satellite relationships, a satellite depends on one nucleus, whereas in multinuclear relationships, several nuclei (at least two) are regrouped at the same level of importance (tree hierarchy). Thus, in the discursive segmentation proposes to reduce the text into the minimal discursive units called Elementary Discursive Units (EDU), through the use of explicit discursive markers. As an example, we can quote some markers in French:

111so that; so that; therefore; even though; then; times that; globally; on the other hand; otherwise; at that time; however; subsequently; since; as and when; if; finally, etc.;.

Markers or particles are often used to connect ideas. Let’s consider the sentence below:

La ville d’Avignon est la capitale du Vaucluse, qui est un département du sud de la France.222Translation of the sentence: The city of Avignon is the capital of Vaucluse which is a department in the south of France.

qui (which) is a discursive marker because it connects two ideas. The first one, “Avignon City is the capital of Vaucluse” (La ville d’Avignon est la capitale du Vaucluse), and the second one (satellite), “[Vaucluse] is a department in the south of France” ([Vaucluse] est un département du sud de la France). Several research has addressed automatic segmentation in several languages, such as: French [afantenos10], English [tofiloski09], Portuguese [mazeiro07], Spanish [da2012diseg, maziero2011dizer] and Tahi. [ketui2012rule]. All converge to the idea of using an explicit list of marks in order to segment texts.

In this first exploratory work, our tests considered only documents in French from the Annodis333http://w3.erss.univ-tlse2.fr:8080/index.jsp?perso=annodis&subURL= corpus. Annodis (ANNOtation DIScursive) is a set of documents in French that were manually enriched with notes of discursive structures. Its main characteristics are:

Annodis aims at building an annotated corpus. The proposed annotations are on two levels of analysis, that is, two perspectives:

Two types of persons annotated Annodis: linguistic experts and students. The first group constituted a E subcorpus called “specialist” and the second group resulted in a N subcorpus called “naive”. These rhetorically annotated subcorps were used as references in our experiments. (c.f. §6).

The Figure 2 shows the general architecture of the proposed discourse segmenter system. The initial input is the raw text encoded in UTF-8. The two initial processes are Part of Speech morphosyntactic Tagging (POS) and the segmentation at the level of the sentences. This last is just a preprocessing step that splits sentences. In the last process the system uses a bank of explicit markers in roder to apply the rules for the final discourse segmentation.

For the experiments, we used lists of markers in French, Spanish, English and Portuguese. We also used the Lexiconn [roze2012lexconn] project list, which regroups 328 French-language markers. Another important parameter specifies which segmentation strategy should be applied, according to the POS labelling of the document.

5.1 Segmentation with explicit use of a marker

5.2 Segmentation with explicit use of a marker and POS labels

The Segmenterμ+ system presents an improvement to the Segmenterμ: inclusion of grammar categories with the TreeTagger tool. The advantage of this system is the detection of certain grammatical forms in order to condition the segmentation. Since it is based on the Segmenterμ, we try to recognise the opportune conditions to gather two segments when both are part of the same discursive segment. We try to identify more subtly when it is pertinent to leave the two segments separate. The Segmenterμ has two distinct strategies:

In this first exploratory work, only documents in French were considered, but the system can be adapted to other languages. The evaluation is based on the correspondence of word pairs representing a border. In this way we compare the Annodis segmentation with the automatically produced segmentation. For each pair of reference segments, a Lr list of word pairs is provided: the last word of the first segment and the first word of the second.

Here are the word pairs of the created reference list (punctuation marks are disregarded):

We have built a second Lc list for the automatically identified segments, following the same criteria of Lr. The Lr and Lc lists regroup, pair by pair, the segment border. We then count the common pair intersection of the two lists. Each pair in the Lc list is also present in the Lr reference list and is a correctly assigned to the class pair. A word pair belonging to the Lc list but not belonging to the Lr reference list, will be a pair assigned to the class. For that same text, the Lc list of candidate pairs obtained with the Segmentatorμ is:

We calculate the precision P, the recall R and the F-score on the text corpus used in our tests, as follow:

×0.45×0.6250.45+0.625=0.523. We used the documents in the Annodis corpus without segmentation, because they had been segmented with the Segmenterμ and with the grammar segmenters.

Two batch of tests were performed. The first on the D set of documents common to the two subcorpus “specialist” E and “naive” N from Annodis. D contains 38 documents with 13 364 words. This first test allowed to measure the distance between the human markers. In fact, in order to get an idea of the quality of the human segmentations, the cuts in the texts made by the specialists were measured it versus the so-called “naifs” note takers and vice versa. The second series of tests consisted of using all the documents of the subcorpus “specialist” E, because the documents of the subcorpus of Annodis are not identical. Then we benchmarked the performance of the three systems automatically.

In this section we will compare the results of the different segmentation systems through automatic evaluations. First of all, the human segmentation, from the subcorpus D composed of common documents. The results are presented in the table tab:humains. The first row shows the performance of the I segments, taking the experts as a reference, while the second presents the process in the opposite direction.

We have found that segmentation by experts and naive produces two subcorpus E and N with very similar characteristics. This surprised us, as we expected a more important difference between them. In any case, we deduced that, at least in this corpus, it is not necessary to be an expert in linguistics to discursively segment the documents. As far as system evaluations are concerned, we use the 78 E documents as reference. Table 2 shows the results.

The aim of this work was twofold: to design a discursive segmenter using a minimum of resources and to establish an evaluation protocol to measure the performance of segmenters. The results show that we can build a simple version of the baseline, which employs only a list of markers and presents a very encouraging performance. Of course, the quality of the list is a preponderant factor for a correct segmentation.

We have studied the impact of the marker which, even though it may seem fringe-worthy, contributes to improving the performance of our segmenters. Thus, it is an interesting marker that we can consider as a discursive marker. The Segmentatorμ version provides the best results in terms of F-score and recall, followed by the Segmentatorμ+V version, which passes it in precision. Regarding evaluation, we developed a simple protocol to compare the performance of the systems. This is, to our knowledge, the first automatic evaluation in French.

It is necessary to intensify our research in order to propose improvements to our segmenters, as well as to study further the impact of grammar tag rules on segmentation. Since we have a standard evaluation protocol, we intend to carry out tests with Portuguese, Spanish (see [da2011development]), English, etc. For that, we will only need a list of markers for each language.

The performance of the systems remains modest, of course, but we must not forget that this is a baseline and its primary objective is to provide standard systems that can be used in testing protocols such as the one we proposed. Despite this evolution, these baselines (or their improved versions) can be used in applications such as automatic document summarisation (e.g., [Torres2014, favre2006lia]), or sentences compression [molina2011discourse].

The main feature of the proposed baseline system is its flexibility with respect to the language considered. In fact, it only uses a list of language markers and the grammatical category of words. The first resource, although dependent on each language, is relatively easy to obtain. We have found that, even with lists of moderate size, the results are quite significant. The grammatical categories were obtained with the help of the TreeTagger statistics tool. However, TreeTagger could be replaced by any other tool producing similar results.

In this appendix, we present the list of rhetorical connectors in French that constitute our list of markers. We point out that the markers ending in apostrophe such as: