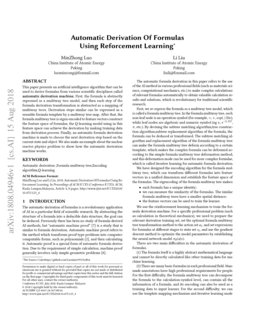 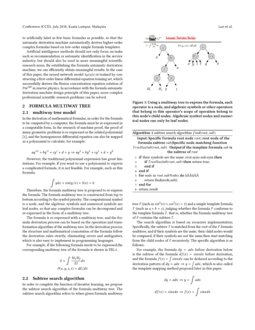 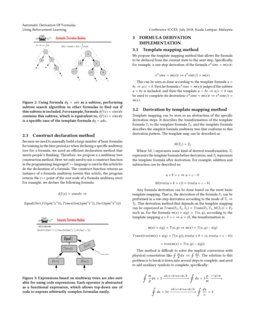 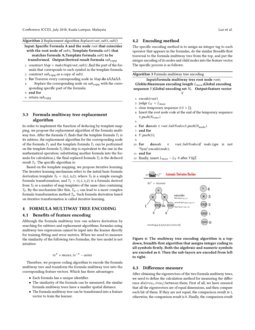 A Note on Kaldi's PLDA Implementation

In this work, we develop an approach to anomaly detection and prevention...
Irmak Saglam, et al. ∙

Some new insights into Karatsuba's algorithm

In this paper, we show how the notion of tree dimension can be used in t...
Bishoksan Kafle, et al. ∙

The automatic derivation of formulas is a revolutionary application of AI in a particular field of scientific research. By abstracting the structure of a formula into a deducible data structure, the goal can be deduced. Previously there has been no study of formula-derived AI methods, but ”automatic machine proof” (Tarski, 1951) is a study that is similar to formula derivation. Automatic machine proof refers to the method which transforms proof-type problems into computer-computable forms, such as polynomials (Collins and Hong, 1998), and then calculating it. Automatic proof is a special form of automatic formula derivation. Due to the requirement of simple calculation, machine proof generally involves only simple geometric problems (Wu, 1986).

The automatic formula derivation in this paper refers to the use of the AI method in various professional fields (such as materials science, computational mechanics, etc.) to make complex calculations of relevant formulas automatically to obtain valuable calculation results and solutions, which is revolutionary for traditional scientific research.

We use the reinforcement learning mechanism to train the formula derivation machine. For a specific professional problem (such as calculation in theoretical mechanics), we need to prepare the relevant derivation training set, set the optional formula multiway tree transformation method to the action set

ai, and set expressions for formulas at different stages to state set si

, and use the gradient descent method to optimize the model parameters by establishing the neural network model

There are two main difficulties in the automatic derivation of formulas.

(1) The formula itself is a highly abstract mathematical language and cannot be directly calculated like other training data for machine learning.

(2) There are many basic formulas in each professional field. Man-made annotations have high professional requirements for people. For the first difficulty, the formula multiway tree can decompose the formula to the calculation-symbol level, can contain all the information of a formula, and its encoding can also be used as a training data to input learner. For the second difficulty, we can use the template mapping mechanism and iterative learning mode to artificially label as few basic formulas as possible, so that the automatic derivation machine automatically derives higher-order complex formulas based on low-order simple formula templates.

Artificial intelligence methods should not only focus on tasks such as recommendation or automatic identification in the service industry, but should also be used in more meaningful scientific research areas. By establishing the formula automatic derivation machine, we can efficiently obtain meaningful results. In the case of this paper, the neural network model πθ(a|s) is trained by constructing a first-order linear differential equation training set, which successfully derives the fission concentration equation solution of Pm149 in reactor physics. In accordance with the formula automatic derivation machine design principle of this paper, more complex professional scientific research problems can be solved.

In the derivation of mathematical formulas, in order for the formula to be computed by a computer, the formula must be re-expressed in a computable form. In the research of machine proof, the proof of many geometric problems is re-expressed as the related polynomial (Al-Sahaf et al., 2017), and the homogeneous differential equation can also be mapped as a polynomial to calculate, for example:

However, the traditional polynomial expression has great limitations. For example, if you want to use a polynomial to express a complicated formula, it is not feasible. For example, such as this formula:

For example, if the following formula needs to be expressed,the corresponding multiway tree of the formula is shown in FIG.1.

We propose the template mapping method that allows the formula to be deduced from the current state to the next step. Specifically, for example, a one-step derivation of the formula exsinx=m(x)t:

This method is difficult to solve the implicit conversion with physical connotation like ∮mpdx⇒∮dxv. The solution to this problem is to break it down into several steps to complete, and need to add auxiliary symbols to complete, specifically:

Although the formula multiway tree can achieve derivation by searching for subtrees and replacement algorithms, formulas using multiway tree expressions cannot be input into the learner directly for training fitting and error metrics. When we need to measure the similarity of the following two formulas, the tree model is not intuitive:

The specific encoding method is to assign an integer tag to each operator that appears in the formulas, do the similar Breadth-first traversal to the formula multiway tree from the top, and put the integer encoding of its nodes and child nodes into the feature vector. The specific process is as follows:

After obtaining the eigenvectors of the two formula multiway trees, we need to define the calculation method for measuring the difference

Defining the formula multiway tree encoding method and differential value calculation method is of great significance to the follow-up learner training and prediction function. The encoding method can extract the features of the formula multiway tree, and convert it into a feature vector which can be calculated using the linear algebra method. The difference value calculation method can be used to complete the error convergence of the neural networks model.

Through continuous updating by training data, a converged Q-table can be finally used to select the action a with the largest expectation of revenue for the specific state s. The action can be thought of as a transformation of the state s into s′, which can be expressed as a(s)=s′.

When the reinforcement learning mode is used to solve the problem of automatic formula derivation, the state set of the environment corresponds to the form of the formula multiway tree at different stages of derivation (Farquhar et al., 2018), and the agent-selectable action set corresponds to all the basic templates that can be selected when formulas deduced. The action can be taken as the template mapping (Tat,Tbt) converts Ft to the formula Ft+1, which is the conversion method R(Ft,(Tat,Tbt))=Ft+1. Specifically it can be expressed as:

πθ(a|s) at each step, that is, select the action a with the largest expected return (the one that is closest to the problem target) according to the existing state s. Then take the subtree search and replace algorithm to achieve a one-step formula derivation. The specific form of this probability:

The neural network model and gradient descent method are used to realize the calculation of πθ(a|s)(in fact, any other learning method can be used here to find this probability, and the accuracy may be better than neural network). The eigenvector of the formula multiway tree Ft is taken as input, and the output is the probability of the selectable action a.

It is necessary to construct a training set about formula derivation before learning begins. The input element in each round of training is a formula Ft at a certain step. The output element of the training set is the optimal transformation selection (Tat,Tbt). That is, (X,y)=Ft,(Tat,Tbt).

The derivation of the solution to a certain physical equation velocity can be expressed as:

In addition, in the training data, the probability of transformation method a∗=(Tat,Tbt) needs to be converted into one-hot vector, which is a∗=(0,0,0...1...0).

Now we use the above method to solve a practical problem, solving the concentration equation of Pm149 in reactor physics, which is a first-order linear differential equation:

Although it is possible to deduce the correct answer, the training process is still very complicated because of the large amount data of neural network training required. Constructing a training set by man is a relatively large project, and the specific formula is more complicated such as a differential equation, so the requirements for training data producers are also higher than the requirements of the general machine learning data producers. Therefore, we should consider using smarter methods to generate formula data. For example, if writing a formula for training formulas according to certain rules, making training data will be more efficiently and accurately.