In this study we address the problem of automated word stress detection in Russian using character level models and no part-speech-taggers. We use a simple bidirectional RNN with LSTM nodes and achieve the accuracy of 90 higher. We experiment with two training datasets and show that using the data from an annotated corpus is much more efficient than using a dictionary, since it allows us to take into account word frequencies and the morphological context of the word. 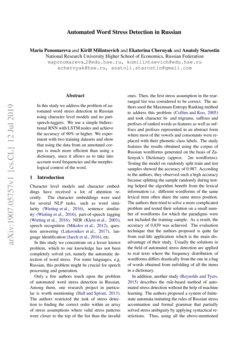 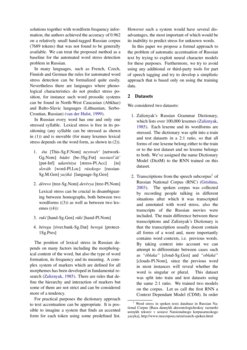 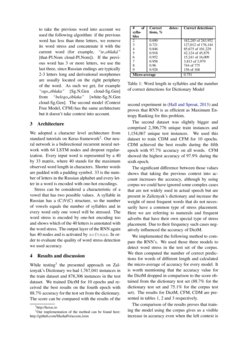 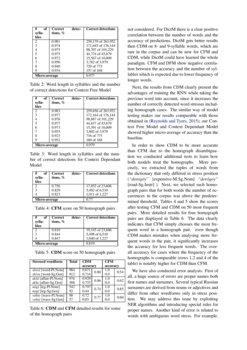 Due to the fact that Korean is a highly agglutinative, character-rich la...
Andrew Matteson, et al. ∙

In this paper, the problem of recovery of morphological information lost...
Piotr Żelasko, et al. ∙

A Systematic Review of Hindi Prosody

All You Need is "Love": Evading Hate-speech Detection

With the spread of social networks and their unfortunate use for hate sp...
Tommi Gröndahl, et al. ∙

In this study we concentrate on a lesser known problem, which to our knowledge has not been completely solved yet, namely the automatic detection of word stress. For some languages, e.g. Russian, this problem might be crucial for speech processing and generation.

Only a few authors touch upon the problem of automated word stress detection in Russian. Among them, one research project in particular is worth mentioning (Hall and Sproat, 2013). The authors restricted the task of stress detection to finding the correct order within an array of stress assumptions where valid stress patterns were closer to the top of the list than the invalid ones. Then, the first stress assumption in the rearranged list was considered to be correct. The authors used the Maximum Entropy Ranking method to address this problem (Collins and Koo, 2005) and took character bi- and trigrams, suffixes and prefixes of ranked words as features as well as suffixes and prefixes represented in an “abstract” form where most of the vowels and consonants were replaced with their phonetic class labels. The study features the results obtained using the corpus of Russian wordforms generated on the basis of Zaliznyak’s Dictionary (approx. 2m wordforms). Testing the model on randomly split train and test samples showed the accuracy of 0.987. According to the authors, they observed such a high accuracy because splitting the sample randomly during testing helped the algorithm benefit from the lexical information i.e. different wordforms of the same lexical item often share the same stress position. The authors then tried to solve a more complicated problem and tested their solution on a small number of wordforms for which the paradigms were not included the training sample. As a result, the accuracy of 0.839 was achieved. The evaluation technique that the authors proposed is quite far from real-life application which is the main disadvantage of their study. Usually the solutions in the field of automated stress detection are applied to real texts where the frequency distribution of wordforms differs drastically from the one in a bag of words obtained from “unfolding” of all the items in a dictionary.

In addition, another study (Reynolds and Tyers, 2015)

describes the rule-based method of automated stress detection without the help of machine learning. The authors proposed a system of finite-state automata imitating the rules of Russian stress accentuation and formal grammar that partially solved stress ambiguity by applying syntactical restrictions. Thus, using all the above-mentioned solutions together with wordform frequency information, the authors achieved the accuracy of 0.962 on a relatively small hand-tagged Russian corpus (7689 tokens) that was not found to be generally available. We can treat the proposed method as a baseline for the automated word stress detection problem in Russian.

In many languages, such as French, Czech, Finnish and German the rules for automated word stress detection can be formalized quite easily. Nevertheless there are languages where phonological characteristics do not predict stress position, for instance such word prosodic systems can be found in North-West Caucasian (Abkhaz) and Balto-Slavic languages (Lithuanian, Serbo-Croatian, Russian) (van der Hulst, 1999).

The position of lexical stress in Russian depends on many factors including the morphological content of the word, but also the type of word formation, its frequency and its meaning. A complex system of markers which are defined for all morphemes has been developed in fundamental research (Zaliznyak, 1985). There are rules that define the hierarchy and interaction of markers but some of them are not strict and can be considered more of a tendency.

For practical purposes the dictionary approach to text accentuation can be appropriate. It is possible to imagine a system that finds an accented form for each token using some predefined list. However such a system would have several disadvantages, the most important of which would be its inability to predict stress for unknown words.

In this paper we propose a formal approach to the problem of automatic accentuation of Russian text by trying to exploit neural character models for these purposes. Furthermore, we try to avoid using any additional or third-party tools for part of speech tagging and try to develop a simplistic approach that is based only on using the training data.

. Our neural network is a bidirectional recurrent neural network with 64 LSTM nodes and dropout regularization. Every input word is represented by a 40 by 33 matrix, where 40 stands for the maximum observed word length in characters. Shorter words are padded with a padding symbol. 33 is the number of letters in the Russian alphabet and every letter in a word is encoded with one-hot encodings.

Stress can be considered a characteristic of a vowel that has two possible values. A syllable in Russian has a (C)V(C) structure, so the number of vowels equals the number of syllables and in every word only one vowel will be stressed. The word stress is encoded by one-hot encoding too and shows which of the 40 letters is annotated with the word stress. The output layer of the RNN again has 40 nodes and is activated by softmax. In order to evaluate the quality of word stress detection we used accuracy.

While testing333Our implementation of the method can be found here: http://github.com/MashaPo/accent_lstm

the presented approach on Zaliznyak’s Dictionary we had 1,767,041 instances in the train dataset and 878,306 instances in the test dataset. We trained DictM for 10 epochs and received the best results on the fourth epoch with 88.7% accuracy for the test set from the dictionary. The score can be compared with the results of the second experiment in

(Hall and Sproat, 2013) and proves that RNN is as efficient as Maximum Entropy Ranking for this problem.

The second dataset was slightly bigger and comprised 2,306,776 unique train instances and 1,154,067 unique test instances. We used this dataset to train CDM and CFM for 10 epochs. CDM achieved the best results during the fifth epoch with 97.7% accuracy on all words. CFM showed the highest accuracy of 97.9% during the sixth epoch.

The significant difference between those values shows that taking the previous context into account increases the accuracy, although by using corpus we could have ignored some complex cases that are not widely used in actual speech but are present in Zaliznyak’s dictionary and increase the weight of most frequent words that do not necessarily have a common type of stress placement. Here we are referring to numerals and frequent adverbs that have their own special type of stress placement. Due to their frequency such cases negatively influenced the accuracy of DictM.

We implemented the following method to compare the RNN’s. We used those three models to detect word stress in the test set of the corpus. We then computed the number of correct predictions for words of different length and calculated the micro-average of accuracy for every model. It is worth mentioning that the accuracy value for the DictM dropped in comparison to the score obtained from the dictionary test set (88.7% for the dictionary test set and 75.1% for the corpus test set). The results for DictM, CFM, CDM are presented in tables 1, 2 and 3 respectively.

The comparison of the results proves that training the model using the corpus gives us a visible increase in accuracy even when the left context is not considered. For DictM there is a clear positive correlation between the number of words and the accuracy of predictions, DictM gets better results then CDM on 8- and 9-syllable words, which are rare in the corpus and can be “new” for CFM and CDM, while DictM could have “learned” the whole paradigm. CFM and DFM show negative correlation between the accuracy and the number of syllables which is expected due to lower frequency of longer words.

Next, the results from CDM clearly present the advantages of training the RNN while taking the previous word into account, since it increases the number of correctly detected word stresses including homograph cases. The similar way of model testing makes our results comparable with those obtained in (Reynolds and Tyers, 2015), our Context Free Model and Context Dependant Model showed higher micro-average of accuracy than the baseline.

In order to show CDM to be more accurate than CFM due to the homograph disambiguation we conducted additional tests to learn how both models treat the homographs. More precisely, we extracted the tuples of words from the dictionary that only differed in stress position (“dorogóy” [expensive-M.Sg.Nom] “dorógoy” [road-Sg.Instr] ). Next, we selected such homograph pairs that for both words the number of occurrences in the corpus was above the predetermined threshold. Tables 4 and 5 show the scores after testing CFM and CDM on 50 most frequent pairs. More detailed results for four homograph pairs are displayed in Table 6. The data clearly indicates that CFM simply chooses the most frequent word in a homograph pair. even though CDM makes mistakes when analysing more frequent words in the pair, it significantly increases the accuracy for less frequent words. The overall accuracy for cases where the frequency of the homographs is comparable (rows 1,2 and 4 of the table) is notably higher for CDM than CFM.

We have also conducted error analysis. First of all, a huge source of errors are proper names both first names and surnames. Several typical Russian surnames are derived from nouns or adjectives and differ from other wordforms only in stress position. We may address this issue by exploiting NER algorithms and introducing special rules for proper names. Another kind of error is related to words with ambiguous word stress. For example, in words like “musoroprovod” [garbage.chute-Sg.Nom] two word stress positions are possible in modern Russian: musoropróvod or musoroprovód. Last but not the least, in Russian the letter ë is always stressed, but if this letter is written as a regular e, the RNN may erroneously ignore it.

There are a few directions for future work:

In this study we conducted a few experiments on training RNNs to detect word stress in Russian words. Our results show that, first of all, the character level RNNs are quite suitable for the task, since on average we achieve the accuracy around 90% or higher. Secondly, we explored two different sources of training data (namely, a dictionary and an annotated corpus) and we can definitively state that using the corpus suits the task better, since it allows us to take frequent cases and morphological context into account and use this information for further disambiguation.