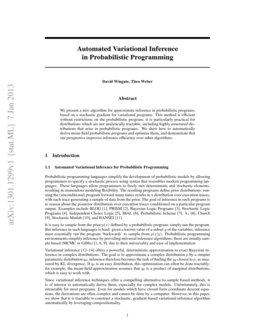 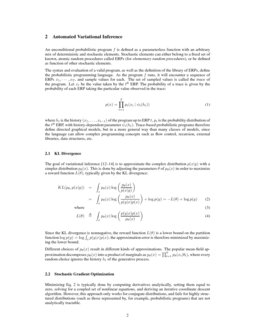 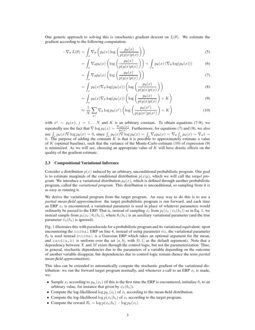 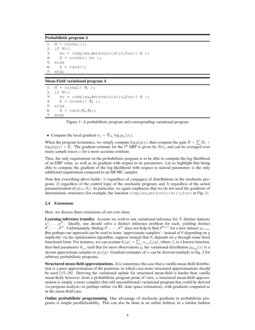 The automation of probabilistic reasoning is one of the primary aims of ...
Luca Ambrogioni, et al. ∙

We introduce the notion of a stochastic probabilistic program and presen...
David Tolpin, et al. ∙

The aim of probabilistic programming is to automatize every aspect of pr...
Luca Ambrogioni, et al. ∙

We introduce a dynamic mechanism for the solution of analytically-tracta...
Lawrence M. Murray, et al. ∙

Probabilistic programming languages simplify the development of probabilistic models by allowing programmers to specify a stochastic process using syntax that resembles modern programming languages. These languages allow programmers to freely mix deterministic and stochastic elements, resulting in tremendous modeling flexibility. The resulting programs define prior distributions: running the (unconditional) program forward many times results in a distribution over execution traces, with each trace generating a sample of data from the prior. The goal of inference in such programs is to reason about the posterior distribution over execution traces conditioned on a particular program output. Examples include BLOG [1], PRISM [2]

It is easy to sample from the prior p(x) defined by a probabilistic program: simply run the program. But inference in such languages is hard: given a known value of a subset y of the variables, inference must essentially run the program ‘backwards’ to sample from p(x|y). Probabilistic programming environments simplify inference by providing universal inference algorithms; these are usually sample based (MCMC or Gibbs) [9, 1, 6], due to their universality and ease of implementation.

p by a simpler parametric distribution qθ; inference therefore becomes the task of finding the qθ closest to p, as measured by KL divergence. If qθ is an easy distribution, this optimization can often be done tractably; for example, the mean-field approximation assumes that qθ is a product of marginal distributions, which is easy to work with.

Since variational inference techniques offer a compelling alternative to sample based methods, it is of interest to automatically derive them, especially for complex models. Unfortunately, this is intractable for most programs. Even for models which have closed-form coordinate descent equations, the derivations are often complex and cannot be done by a computer. However, in this paper, we show that it is tractable to construct a stochastic, gradient-based variational inference algorithm automatically by leveraging compositionality.

The syntax and evaluation of a valid program, as well as the definition of the library of ERPs, define the probabilistic programming language. As the program f runs, it will encounter a sequence of ERPs x1,⋯,xT, and sample values for each. The set of sampled values is called the trace of the program. Let xt be the value taken by the tth

is the probability distribution of the

The goal of variational inference [13, 12, 14] is to approximate the complex distribution p(x|y) with a simpler distribution pθ(x). This is done by adjusting the parameters θ of pθ(x) in order to maximize a reward function L(θ), typically given by the KL divergence:

Since the KL divergence is nonnegative, the reward function L(θ) is a lower bound on the partition function logp(y)=log∫xp(y|x)p(x); the approximation error is therefore minimized by maximizing the lower bound.

Different choices of pθ(x) result in different kinds of approximations. The popular mean-field approximation decomposes pθ(x) into a product of marginals as pθ(x)=∏Tt=1pθ(xt|θt), where every random choice ignores the history ht of the generative process.

Minimizing Eq. 2 is typically done by computing derivatives analytically, setting them equal to zero, solving for a coupled set of nonlinear equations, and deriving an iterative coordinate descent algorithm. However, this approach only works for conjugate distributions, and fails for highly structured distributions (such as those represented by, for example, probabilistic programs) that are not analytically tractable.

One generic approach to solving this is (stochastic) gradient descent on

. We estimate the gradient according to the following computation:

with xj∼pθ(x), j=1…N and K is an arbitrary constant. To obtain equations (7-9), we repeatedly use the fact that ∇logpθ(x)=∇θpθ(x)pθ(x). Furthermore, for equations (7) and (9), we also use ∫xpθ(x)∇logpθ(x)=0, since ∫xpθ(x)∇logpθ(x)=∫x∇θpθ(x)=∇θ∫xpθ(x)=∇θ1=0. The purpose of adding the constant K is that it is possible to approximately estimate a value of K

(optimal baseline), such that the variance of the Monte-Carlo estimate (

10) of expression (9) is minimized. As we will see, choosing an appropriate value of K will have drastic effects on the quality of the gradient estimate.

We derive the variational program from the target program. An easy way to do this is to use a partial mean-field approximation: the target probabilistic program is run forward, and each time an ERP xt is encountered, a variational parameter is used in place of whatever parameters would ordinarily be passed to the ERP. That is, instead of sampling xt from pt(xt|ψt(ht)) as in Eq. 1, we instead sample from pt(xt|θt(ht)), where θt(ht) is an auxiliary variational parameter (and the true parameter ψt(ht) is ignored).

Fig. 1 illustrates this with pseudocode for a probabilistic program and its variational equivalent: upon encountering the normal ERP on line 4, instead of using parameter mu, the variational parameter θ3 is used instead (normal is a Gaussian ERP which takes an optional argument for the mean, and rand(a,b) is uniform over the set [a,b], with [0,1] as the default argument). Note that a dependency between X and M exists through the control logic, but not the parameterization. Thus, in general, stochastic dependencies due to the parameters of a variable depending on the outcome of another variable disappear, but dependencies due to control logic remain (hence the term partial mean-field approximation).

This idea can be extended to automatically compute the stochastic gradient of the variational distribution: we run the forward target program normally, and whenever a call to an ERP xt is made, we:

When the program terminates, we simply compute logp(y|x), then compute the gain R=∑Rt+logp(y|x)+K. The gradient estimate for the tth ERP is given by Rψt, and can be averaged over many sample traces x for a more accurate estimate.

Thus, the only requirement on the probabilistic program is to be able to compute the log likelihood of an ERP value, as well as its gradient with respect to its parameters. Let us highlight that being able to compute the gradient of the log-likelihood with respect to natural parameters is the only additional requirement compared to an MCMC sampler.

Here, we discuss three extensions of our core ideas.

Learning inference transfer.  Assume we wish to run variational inference for N distinct datasets y1,…,yN. Ideally, one should solve a distinct inference problem for each, yielding distinct θ1,⋯,θN. Unfortunately, finding θ1,⋯,θN does not help to find θN+1 for a new dataset yN+1. But perhaps our approach can be used to learn ‘approximate samplers’: instead of θ depending on y implicitly via the optimization algorithm, suppose instead that θt depends on y through some fixed functional form. For instance, we can assume θt(y)=∑jαi,jfj(y), where fj is a known function, then find parameters θt,j such that for most observations y, the variational distribution pθ(y)(x) is a decent approximate sampler to p(x|y). Gradient estimates of α can be derived similarly to Eq. 2 for arbitrary probabilistic programs.

Online probabilistic programming  One advantage of stochastic gradients in probabilistic programs is simple parallelizability. This can also be done in an online fashion, in a similar fashion to recent work for stochastic variational inference by Blei et al.  [19, 20, 21]. Suppose that the set of variables and observations can be separated into a main set X, and a large number N of independent sets of latent variables Xi and observations Yi (where the (Xi,Yi) are only allowed to depend on X). For instance, for LDA, X represents the topic distributions, while the Xi represent the document distribution over topics and Yi topic i. Recall the gradient for the variational parameters of X is given by KψX, with K=RX+∑i(Ri+logP(Yi|Xi,X), where RX is the sum of rewards for all ERPs in X, and Ri is the sum of rewards for all ERPs in Xi. K can be rewritten as X+NE[Rv+logP(Yv|Xv,X), where v is a random integer in {1,…,N}. The expectation can be approximately computed in an online fashion, allowing the update of the estimate of X without manipulating the entire data set Y.

Because both SOGD and ENAC estimate Fθ in the same way, we conclude that the performance advantage of ENAC is not due solely to its use of second-order information: the additional step of estimating the baseline improves performance significantly.

Natural conjugate gradients for variational inference are investigated in [25], but the analysis is mostly devoted to the case where the variational approximation is Gaussian, and the resulting gradient equation involves an integral which is not necessarily tractable.

Use of stochastic approximations for variational inference is also used by Carbonetto [30]. Their approach is very different from ours: they use Sequential Monte Carlo to refine gradient estimates, and require that the family of variational distributions contains the target distribution. While their approach is fairly general, it cannot be automatically generated for arbitrarily complex probabilistic models.

Finally, stochastic gradient methods are also used in online variational inference algorithms, in particular in the work of Blei et al. in stochastic variational inference (for instance, online LDA [19], online HDP [20], and more generally under conjugacy assumptions [21]), as a way to refine estimates of latent variable distributions without processing all the observations. However, this approach requires a manual derivation of the variational equation for coordinate descent, which is only possible under conjugacy assumptions which will in general not hold for arbitrary probabilistic programs.