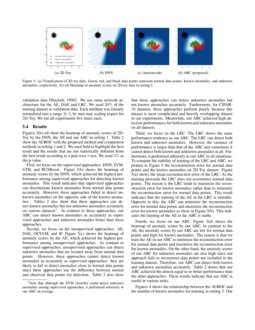 Anomaly detection is one of the most important tasks in artificial intelligence and is widely performed in many areas, such as cyber security

On the other hand, an unsupervised approach does not require anomalies for training, since it tries to model only the normal data points. Figure 1

(b) shows the image of the unsupervised approach. Since this approach detects anomalies by using the difference between normal and test data points, it can detect both known anomalies and unknown anomalies that are away from normal data points. This difference is frequently called the anomaly score. To detect anomalies in high-dimensional and complex data, various methods based on deep learning techniques have been presented. One of the major unsupervised approaches based on deep learning is the autoencoder (AE)

, which tries to reconstruct original data points from the noisy input data. The DAE is estimated by minimizing the following objective function

is a noise from an isotropic Gaussian distribution. Since the DAE is robust against the noise, it is useful in noisy environments. The AE and DAE can be optimized with stochastic gradient descent (SGD)

We propose a new supervised anomaly detector based on the AE, the Autoencoding Binary Classifiers (ABC), which can accurately detect known and unknown anomalies.

Under this definition, we minimize the sum of the following negative log-likelihood of the conditional probability

Our model can be optimized with SGD by minimizing sum of Eq. (8) for all data points. Algorithm 1 shows pseudo code of the proposed ABC, where K is the minibatch size and θ is the parameters of the AE in our model. After the training, this model can detect anomalies by using the conditional probability p(yi|xi) for each data point. p(yi=0|xi) is more reasonable anomaly score than the reconstruction error because we can naturally regard the data point xi as anomaly when p(yi=0|xi)>0.5.

If the label information is given perfectly, anomaly detection can be regarded as a binary classification problem. In this situation, supervised classifiers such as support vector machines

[Dreiseitl and Ohno-Machado2002] are usually used. However, these standard supervised classifiers cannot detect unknown anomalies accurately and do not work well in the class imbalance situations. There are several approaches for imbalanced data such as cost-sensitive and ensemble approaches such as random undersampling boost [Seiffert et al.2010] although these approaches do not aim to detect unknown anomalies. Our ABC also works well for imbalanced data and can detect unknown anomalies since it exploits the reconstruction error of the unsupervised AE. To achieve high detection performance when label information is available for part of the dataset, semi-supervised approaches [Kiryo et al.2017] that utilize both labeled and unlabeled data have been presented. The semi-supervised situation that can use the unlabeled data is out of scope of this paper.

Since the label information is rarely given perfectly in real situation, unsupervised approaches such as the local outlier factor

[Breunig et al.2000], one-class support vector machines [Tax and Duin2004], and the isolation forest method [Liu et al.2008] are usually used. Especially, neural network based methods, typically the AE and the variational autoencoder (VAE) [Kingma and Welling2013], have succeeded in detecting anomalies for high-dimensional datasets. However, the unsupervised approaches do not detect known anomalies as accurately as the supervised approach. To solve this problems, the LRC has been presented as shown in Section 2. This is similar approach to ours. However, the training of the LRC becomes unstable since the reconstruction error of the AE in the LRC is bounded below but not bounded above. Opposite to this, our ABC can be trained stably since the objective function of the ABC is bound above with respect to reconstruction error as described in Section 3.

We used the following four datasets.

KDD‘99. The KDD‘99 data was generated using a closed network and hand-injected attacks for evaluating the performance of supervised network intrusion detection. The dimensionality of the data point was 41. We used ‘10 percent dataset’ for training and ‘corrected dataset’ for test. 222This dataset is available at http://kdd.ics.uci.edu/databases/kddcup99/kddcup99.html. For simplicity, we removed three categorical features (‘protocol type’, ‘service’ and ‘flag’) and duplicated data points. We used ‘neptune’, which is the largest anomaly class, for known anomalies, and used attacks included in ‘R2L’ for unknown anomalies.

CIFAR10. The CIFAR10 is a collection of images that contains 60,000 32×32 color images in 10 different classes. We used ‘data_batch_1−5’ for training, and ‘test_batch’ for testing. 333This dataset is available at https://www.cs.toronto.edu/~kriz/CIFAR.html. We used a set of ‘automobile’ images for normal data points, ‘truck’ for known anomalies, and ‘dog’ for unknown anomalies.

The details of datasets are listed in Table 1. We designed the experiments so that detecting unknown anomalies is more difficult than detecting known anomalies in unsupervised fashion except for 2D-Toy dataset.

We compared our approach with the following supervised and unsupervised methods:

. For the SVM, we used the radial basis function (rbf) kernel. For the DNN, we used a network that had three fully-connected layers and sigmoid cross entropy as a loss function.

Unsupervised methods. As the unsupervised approaches, we used the AE, DAE, One-class SVM (OCSVM) [Tax and Duin2004], and Isolation Forest (IF) [Liu et al.2008]. For the OCSVM, we used the rbf kernel.

We did experiments in following three settings:

For our approach, we used neural networks with two hidden layer (10−10 hidden units for 2D-Toy, and 300−100 hidden units for other datasets) for the encoder and the decoder. We used ℓ2-norm as the distance function of Eq. (1) and Eq. (2

). We also evaluated our ABC with the DAE with noise from a Gaussian distribution with a standard deviation of

. We used a hyperbolic tangent for the activation function. As the optimizer, we used Adam with batch size 100

for the other datasets. The maximum number of epochs was set to

300 for all datasets, and we used early-stopping on the basis of the validation data [Prechelt1998]. We use same network architecture for the AE, DAE and LRC. We used 20% of the training dataset as validation data. Each attribute was linearly normalized into a range [0,1] by min-max scaling expect for 2D-Toy. We ran all experiments five times each.

Figures 3(b)-(d) show the heatmap of anomaly scores of 2D-Toy by the DNN, the AE and our ABC in setting 1. Table 2 show the AUROC with the proposed method and comparison methods in setting 1 and 2. We used bold to highlight the best result and the results that are not statistically different from the best result according to a pair-wise t-test. We used 5% as the p-value.

Third, we focus on the LRC. The LRC shows the same performance tendency as our ABC. The LRC can detect both known and unknown anomalies. However, the variance of performance is larger than that of the ABC and sometimes it cannot detect both known and unknown anomalies at all. Furthermore, it performed inferiorly to our ABC in all situations. To compare the stability of training of the LRC and ABC, we plotted in Figure

Fourth, we focus on our ABC. Figure 3(d) shows the heatmap of anomaly scores by our ABC. In contrast to the AE, the anomaly scores by our ABC are low for normal data points and high for known anomalies. The reason is that we train the AE in our ABC to minimize the reconstruction error for normal data points and maximize the reconstruction error for known anomalies. On the other hand, the anomaly scores of our ABC for unknown anomalies are also high since our approach fails to reconstruct data points not included in the training dataset. Therefore, our ABC can detect both known and unknown anomalies accurately. Table 2 shows that our ABC achieved the almost equal to or better performance than the other approaches. These results indicate that our ABC is useful in various tasks.

Figures 4 shows the relationship between the AUROC and the number of known anomalies for training in setting 3. Our ABC maintains a high detection performance, whereas the other supervised approaches perform poorly as the number of known anomalies decreases, even RUSBoost, which is designed to work well in class imbalance situations. This result indicates that our ABC is useful when we cannot obtain enough anomalies.